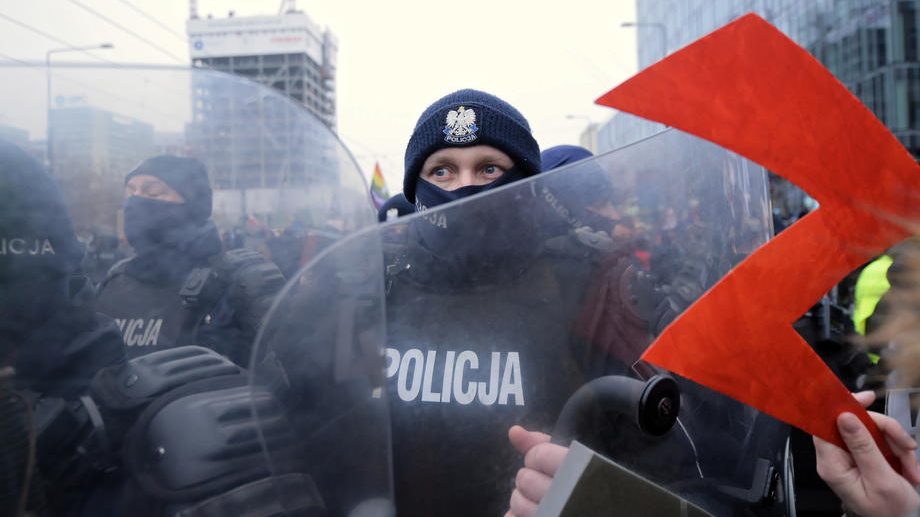 THOUSANDS IMMEDIATELY PROTESTED the Polish law, which went into effect January 27, 2021, that eliminated of one of the few reasons women can obtain an abortion.

The Constitutional Court ruled last October 22nd that any termination because of fetal abnormality is “incompatible” with the Polish constitution. However massive demonstrations forced the government to hold off publishing the controversial ruling in the Journal of Laws. Three months later and given that gatherings of more than five are banned during the pandemic, the government moved to implement the decision.

As soon as the government announced that the publication of the Constitutional Court’s ruling late Wednesday afternoon, Women’s Strike called for everyone to go into the streets that evening, and they did. The Warsaw demonstration started in front of the Constitutional Tribunal Building and soon brought traffic to a halt. In recognition of the Argentinian women’s successful campaign to overturn their abortion ban, many of the women demonstrators wore green scarves.

Strike leaders announced there would be protests in Krakow, Lodz, Wroclaw, Poznan and Katowice to start with, with more locations to be organized subsequently.

Even before this latest restriction, Poland had one of the most draconian abortion laws in Europe. The right-wing Law and Justice Party controls the government and appointed its members to the Court. Under the revised law, there are only two reasons for abortion: in cases of rape or incest or if the woman’s life is in danger. It also allows doctors to opt out of performing the procedure, making it even more difficult to obtain.

Poland’s human rights commissioner, Adam Bodnar, pointed out that the government’s policy is opposed by the majority and said, “The state wants to further limit their rights, risk their lives, and condemn them to torture.”

It is estimated that 200,000 Polish women seek abortion each year, but only 2,000 are obtained under the provisions of the law. The other 198,000 are either clandestine and “illegal” or occur in nearby countries.