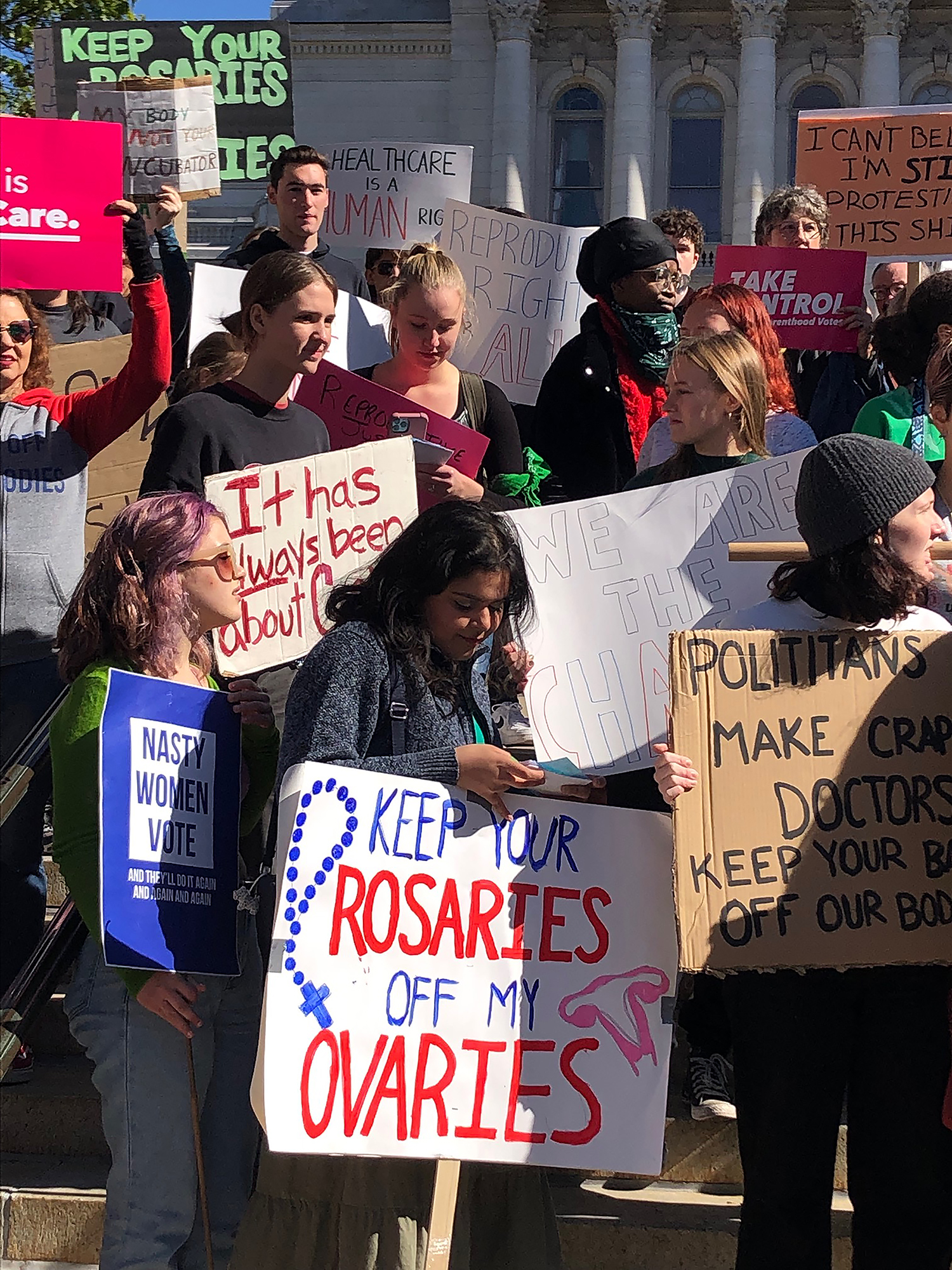 Wisconsin’s 19th century anti-abortion law went into effect once federal protection under Roe was overturned. On October 8 over 300 people marched at the state capitol in Madison. Marsha Rummel

PATRIARCHAL POLITICIANS AND rulers pass judgment on women and those who defy sexual stereotypes, imposing laws to empower “morality police” the world over — Iran, Afghanistan, India and Saudi Arabia; Poland, El Salvador and the USA.

Women’s struggles for bodily autonomy, reproductive freedom and security from violence are the center of today’s fights to defend democratic rights for all. Women (and those who define themselves as non-binary) face this gauntlet of restrictions because the patriarchy sees them as threatening the “public order” — by symbolizing men’s sexual desires, which need to be constrained by rendering women invisible.

Those who become visible face almost- certain harm. For some, like 22-year-old Kurdish-Iranian Jina/Mahama Amini, the judgment may end with a fatal beating. In other cases, it may be sexual harassment in the workplace. It might result in being raped and disgraced, whether by “date rape” or as a war crime.

In many diverse countries, laws require that all who become pregnant continue the pregnancy. Usually the law criminalizes those who help with an abortion, but in countries like El Salvador even those who endured a miscarriage have been reported, tried and sentenced to prison.

You might ask: But how can that be in the United States, where women represent more than 50% of college graduates, where we elected a woman of color as vice president, where everywhere provocative and sometimes outlandish ads reveal women’s bodies?

True, we do not live in a Puritanical society. Even evangelical right wingers like Sarah Palin and Tudor Dixon (far-right Republican candidate for Michigan governor) appear stylish on their campaign circuit. But if their ideology and presentation seem contradictory nonetheless the judging continues.

There are the “good” women, who add to their partner’s status by being able to handle home-and-work life, dress appropriately — even glamorously. Then there are the less adept (less well resourced). They too can be divided into the ones who regain their balance after an initial fall — whether drugs, failed marriage, or an abortion that “haunts” them — and those who never “recover.” There are social penalties for those who fail to conform.

Indeed, in the United States we can say that instead of women’s invisibility there is just the opposite, a hypervisibility that invites constant judging of who is the prettiest, the best dressed, the most accomplished. However, to maintain this facade, they are required to hire a nanny, housekeeper or cleaner who is often a woman of color.

Insofar as the United States has a publicly proclaimed ideology, it is one of “progress.” So the leaking last April of Judge Alito’s draft decision, declaring in Dobbs v. Jackson Women’s Health Organization that there is no constitutional right to abortion, shocked a public that had more or less assumed that women’s right to liberty was a part of the federal constitution.

The legal status of abortion reverted to the various states. Within three months of the Dobbs decision 13 states — mostly in the South and Midwest — had banned abortion outright while others attempted to limit the procedure to the first 5-12 weeks of pregnancy.

But well before the Dobbs ruling, state laws forced the pregnant person to jump through a series of legal hoops or demanded clinics provide burdensome and medically superfluous procedures that drove up the cost. While anti-abortion forces claimed such legislation necessary for the “safety” of those seeking abortion, many had been ruled undue burdens under the federal protection of abortion rights.

The Dobbs decision also threatens other Supreme Court decisions based on the right to personal liberty; this right flows from the equal protection provisions of the post-Civil War 14th Amendment. Justice Clarence Thomas has proclaimed these up for grabs.

The right to abortion before fetal viability, codified in Roe v. Wade (1973), was built on the reasoning outlined in Griswold v. Connecticut, which affirmed the right of married couples to engage in sex without procreation (1965); the 1967 Loving v. Virginia case affirming the right to racial intermarriage; and Eisenstadt v. Baird (1972) that extended the provisions of Griswold to all individuals.

Subsequently the same reasoning formed the basis of Lawrence v. Texas (2003) upholding the right of consenting adults to have sex with partners of any sex and Obergefell v. Hodge (2015), enshrining the right of people to marry regardless of sex.

Legal commentators have pointed to the flimsy arguments offered to justify reversing a Supreme Court decision almost 50 years old, but it is clear this was a fight waged by religious zealots who were initially forced to adopt the strategy of designing restrictions on abortion in the name of safety.

At the federal level the most important impediment has been the annual passage of the Hyde Amendment. This bars low-income women from accessing federal Medicare funding for abortion under most circumstances. The right wing asked: “Why should the public be ‘forced’ to pay for an abortion?” (Only 16 states provide full funding for Medicare abortions.)

Although late abortions represent less than 10% of all abortions and usually result because of severe fetal abnormality, the right wing aggressively campaigns against them.

In 2003 George W. Bush signed into law a bill that opposes a medical procedure used before fetal viability (between 15-24 weeks of pregnancy). Known as intact dilation and extraction — but termed “partial-birth abortion” by the National Right to Life Committee — the method is criminalized if the fetus is still living.

That is, the focus is on the fetus, no matter how abnormal, rather than on the well-being of the pregnant individual. As Linda Greenhouse wrote when the U.S. Supreme Court ruled the law legal in Gonzales v. Carhart, it promised “to reframe the abortion debate and define the young Roberts court.”

“By identifying the intact procedure and giving it the provocative label ‘partial-birth abortion,’ the movement turned the public focus of the abortion debate from the rights of women to the fate of fetuses. In short order, 30 states banned the procedure.” (“Justices Back Ban on Method of Abortion,” by Linda Greenhouse, N.Y. Times, April 19, 2007.)

Chaos in the States

In addition to the passage of these two federal laws, a host of state legislation limiting access to abortion has built up over the years: mandating a waiting period (one to three days), parental consent laws and a counseling session (with several states providing false information, such as abortions possibly causing breast cancer or mental health issues).

Others proscribed what insurance coverage could be offered, limited or outlawed telemedicine for abortion (but for no other procedure), required an ultrasound in every case or demanded clinics and doctors meet unnecessary standards.

The Casey v. Planned Parenthood decision (1992) allowed some restrictions to stand so long as they did not impose an “undue burden” on the pregnant individual. But what defines an undue burden?

The 2016 decision, Whole Women’s Health vs. Hellerstedt, provided a clear answer. The 5-to-3 ruling swept aside the requirement that clinics providing abortion must be ambulatory surgical centers, staffed by doctors with admitting privileges at a hospital within 30 miles.

While the Texas legislature claimed such restrictions were necessary, the majority opinion concluded:

“Each [provision] places a substantial obstacle in the path of women seeking a previability abortion, each constitutes an undue burden on abortion access, and each violates the federal Constitution.”

This provided the standard against which similar legislation could be measured. But with three Trump appointees added to the Court, there was a majority committed to overthrow the entire Roe decision.

States began to pass laws that were in explicit violation of Roe, and within a year the Court agreed to hear a case where abortion was banned after 15 weeks, and which had been struck down as unconstitutional by a lower court. The Court’s acceptance of this case signaled the writing was on the wall.

Then Texas passed a law that banned abortions after the sixth week. Instead of state officials enforcing the law, SB-8 empowers private citizens to sue anyone involved in helping with the abortion, for which they would be handsomely compensated.

But when abortion providers asked the Supreme Court to block its enforcement while they appealed the obviously unconstitutional law, its failure to act reinforced court watchers’ fear that Roe would be overturned.

As a result of SB-8, Dallas hospitals were forced to alter their procedures for terminating non-viable pregnancies. A report in the N.Y. Times revealed:

“(W)omen had to wait an average of nine days for their conditions to be considered life threatening, enough to justify abortion. Many suffered serious health consequences while they waited, including hemorrhaging and sepsis, and one woman had to have a hysterectomy as a result.” (“Roe’s Reversal Changes Ways Doctors Work,” by Kate Zernike, N.Y. Times, September 11, 2022)

Now doctors can face prison and the loss of their license if their judgment call is disputed. Even forensic nurses caring for sexual assault cases are worried that providing the morning-after pill may place them in the right-wing’s crosshairs.

Medical personnel are pointing to the vagueness of state abortion laws and their category of exceptions. As the American College of Obstetrician and Gynecologists points out, it is “impossible” and “dangerous” to compile a complete list of medical problems the pregnant person or the embryo/fetus could develop.

Given that annually roughly a million U.S. women suffer miscarriages and stillbirths (10-20% of all pregnancies, more than the number of abortions), some have been viewed as deliberately terminating their pregnancy and arrested. According to the National Advocates for Pregnant Women, between 1973 and 2020, 1700 have faced charges of feticide, manslaughter, “depraved heart” homicide or homicide by child abuse. Unsurprisingly, those who have been imprisoned are women of color.

With increasing numbers of state abortion bans and fetal rights legislation, miscarriages will be seen as signs of suspicious criminal activity. Echoes of El Salvador!

Indeed, under the theocratic doctrine that “life begins at conception,” isn’t any miscarriage a potential homicide to be investigated? Isn’t any woman of reproductive age a container to be filled by a phantom embryo?

This need to legislate the bodies of pregnant people seems particularly ironic given that at least half of those who become pregnant did not choose to do so. Are they to continue the pregnancy under all circumstances? Are their diets and physical activities to be monitored so that the pregnancy continues?

Because we do not have a public health system, many begin their pregnancy in poor health; their high-risk pregnancies ensure that the U.S. rate of infant and maternal death is the highest in the industrial world. Yet if they decide to end their pregnancy, they and those who help them are to be treated with suspicion and face possible criminal charges. Surveillance and control are the watchwords of the day.

Anywhere in the world, judging women’s bodies and the decisions they make stands in the way of building societies where each individual has the fundamental right to their own bodily autonomy.

That basic right — whether the state is mandating women to wear a hijab, forcing them to take it off (e.g. in France and India), or forcing a pregnant person to continue the pregnancy at whatever personal and social cost — is essential.

If this right is not recognized, explosions will continue to take place.