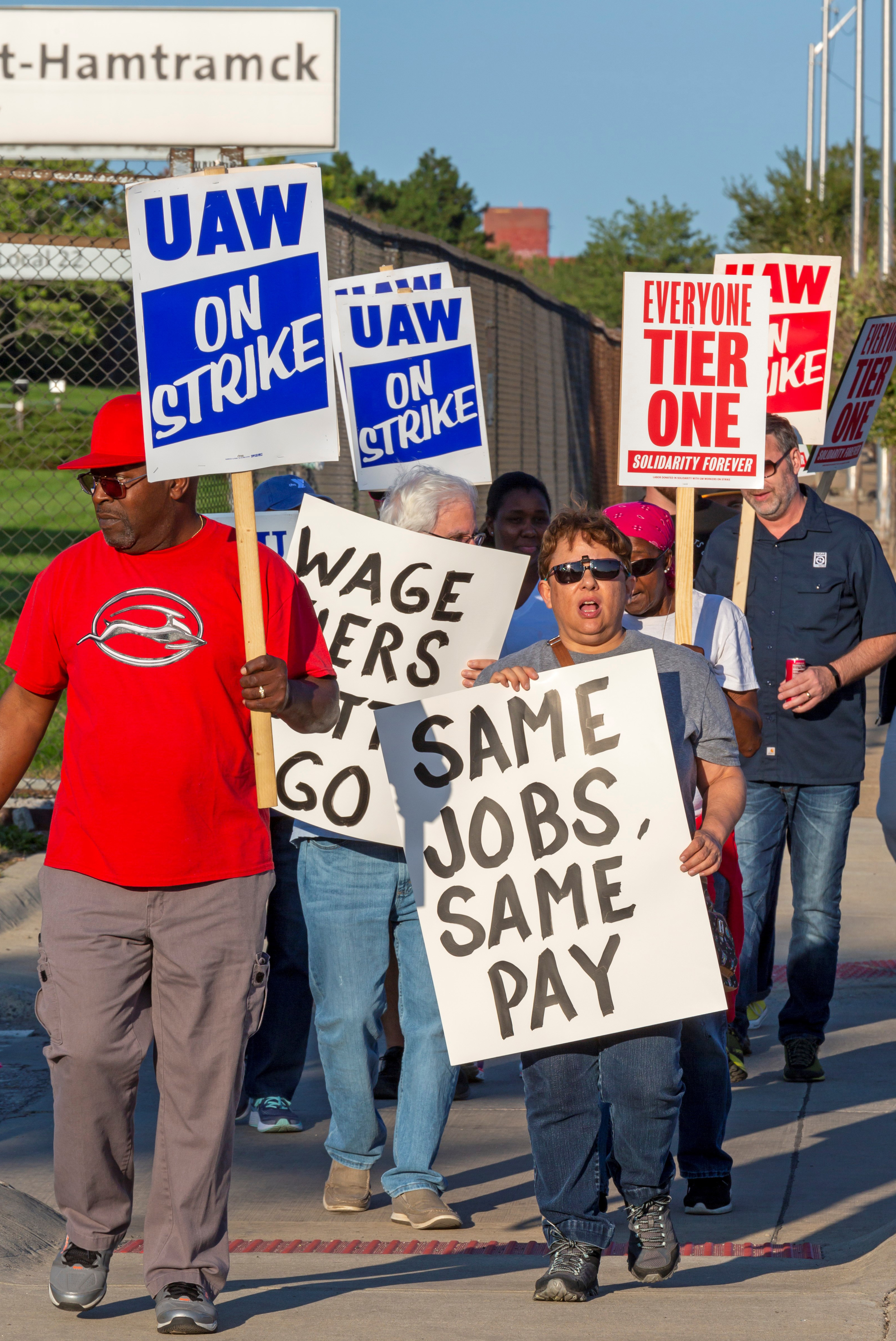 During the 2019 strike at GM, UAW members on the picket line said they wanted everyone to earn the same wages and benefits. Jim West

UNITED AUTO WORKERS (UAW) members have been scandalized as a dozen top officers were convicted in federal court of taking at least $3.5 million in illegal deals from FCA, kickbacks from vendors and/or stealing $1.5 million in union funds. Included were past and current International UAW presidents, Dennis Williams and Gary Jones. Although the other International Executive Board (IEB) members claim that these were “bad” apples, few believe the dozen could have managed by themselves.

Rory Gamble was quickly and unanimously elected by the IEB to serve out the rest of Jones’ term, ending in 2022. Gamble, the first African-American UAW International President, previously served as Region 1A Director for 12 years and Vice President in charge of the Ford Department since 2018. Although he promised to clean house, he comes from the same Administrative Caucus (AC) as Williams and Jones, as does every other IEB member.

On January 29, 2021 the UAW leadership settled with the Justice Department, agreeing to a six-year oversight by a court-appointed federal monitor with extensive powers. New York attorney Neil Barofsky has been appointed to be that monitor. Barofsky previously served as assistant U.S. Attorney in the Southern District of New York.

Currently a partner at the Jenner & Block, Barofsky specializes in the law firm’s monitorship practice. He and his team are charged with monitoring elections, investigating corruption and requiring compliance with labor law. They will be paid by the UAW.

One element of the consent decree is holding a membership-wide referendum on the procedure for electing top UAW officials. Currently members elect delegates to a Constitutional Convention, held every four years, where the IEB is elected. For the past 70 years the caucus in power, the Administration Caucus, has controlled the convention.

Over the past 30 years only one person not nominated by the caucus — Jerry Tucker — was elected Regional Director. That happened only after the Labor Department ruled the initial election fraudulent and supervised the re-run. When another Regional Director, Warren Davis, disobeyed caucus rules and ran for re-election, the following day convention delegates voted to dissolve the Region.

Dissidents have long advocated for election of top officers through a one-member, one-vote system. It is viewed as the first step to end the AC stranglehold over the union.

Two years ago Unite All Workers for Democracy (UAWD) formed to amend the UAW Constitution to provide for direct election. When the time period UAWD had alloted itself for gathering petitions ran out, 26 locals representing 60,000 members had voted their support. Short just a few more locals and 20,000 members to meet the requirement, the rank-and-file grouping planned to relaunch their petition — but federal indictments opened up another alternative.

How the Corruption Developed

Currently the Administration Caucus holds all IEB seats and runs all regional offices. In addition to being the union’s face in its meetings with management,  AC officers appoint and dismiss staff, authorize or deny local strike actions, push or bury grievances.

Through wielding this power they are able to pressure convention delegates and local officers. Particularly since the 1979 economic recession they have come to see from management’s perspective — or at least believe that management has all the cards. They have negotiated one concessionary contract after another, telling members they should feel lucky to have a union job.

Through this process of selling contracts that do not “save” jobs they have built a culture of collaboration with management. Apparently it’s not so far from hanging out with management figures to supplementing one’s salary and becoming like them.

As the Administration Caucus threaded its way through the unfolding scandals it has kept a low-key profile. In 2020, as the pandemic took hold, Gamble announced the union would work with management to make sure facilities were safe. At first they published the names of members who died from COVID along with their local. But as time went on it became harder and harder to obtain information about safety.

Meanwhile, as many organizations met over zoom, the IEB allowed locals to forgo membership meetings. Only with the end of this summer have they begun scheduling meetings.

Direct election of top officers makes sense to members — it’s the way we elect local officers. It’s also the method that the Teamsters, Machinists, Laborers, Steelworkers, American Postal Workers, United Mine Workers, UE and the Longshore and Warehouse unions use. In fact, Teamsters adopted that system in 1989 as part of a federal settlement to weed out corruption in their union.

Aware that the federal monitor can block candidates for office who do not meet an anti-corruption standard, the IEC is using the period before the referendum to reorganize. Gamble announced he was retiring this past June. He was replaced by Ray Curry, who had been elected secretary-treasurer in 2018. Previously he was Region 8 Director.

Frank Stuglin, Region 1 Director, replaced Curry. With Vice President With Gerald Kariem’s retirement, Chuck Browning moved up to Vice President in charge of the Ford Department. Between 2010-2018 he had served as an administrative assistant to the president, then became Region 1A Director.

Just as when Gamble replaced Gary Jones, these were all unanimous votes. (Vice Presidents Cindy Estrada and Terry Dittes remained in the positions for which they had been elected three years before.)

Several conclusions can be drawn from looking at these IEB actions: 1) the AC operates as a tight unit, 2) it prepares for renewal through staff appointments and developing cadre at the regional offices, and 3) this specific reorganization is to advantage IEB officers when they run as incumbents in the next election. The cards have been reshuffled but it’s the same deck.

The reality is that the AC handpicks its candidates and imposes caucus discipline. Yet the corruption scandal reveals its failure to discipline its top leaders. Given the layers of the AC’s control of the union, neutral referendum rules will be important in giving UAW members a chance to change direction.

The federal monitoring team is responsible for setting up and conducting the referendum and the leadership election that follows next year. For its part, the UAW leadership is responsible for providing the addresses and emails of every UAW member, including part-time and laid-off workers as well as retirees. More than a million members are eligible to vote.

As of mid-August, UAWD built a website to advocate for direct elections, printed and distributed thousands of leaflets and collected pledges of those who support one member, one vote. In contrast, there is silence from Solidarity House (where the IEB resides) and the regional offices.

Given the language of the consent decree, the Office of Labor-Management Standards ruled that no UAW resources can be used by advocates on either side. The IEB has challenged that ruling, asking to have the decree amended so that there can be at least a monitored use of union resources.

In order to meet the timetable laid out in the consent order, the federal monitoring team published the interim rules on its website. Given the impasse in negotiating with the IEB, the monitor indicated that if the consent decree is amended the rules and schedule will need to be revised. For now, the summary states:

So far UAWD representatives have met with the mediation team three times. The main concern is to ensure a level playing field so UAWD and other reformers can make our voices heard during the campaign.

We are opposed to the UAW IEB, a party to the consent decree, campaigning against direct elections. Given the difficulty of reaching UAW members solely by mail, we encourage the addition of electronic balloting. We strongly suggest that the monitoring team make itself accessible to members so that missing ballots or campaign violations can be immediately addressed.

What Are the Stakes?

After the history of concessionary contracts and the level of corruption that has been revealed, the membership is cynical. Yet most members aren’t aware of the Administration Caucus as a political force; they just see that the leadership doesn’t pay attention to their demands. But it isn’t just self-centered individuals, but a political machine that stands in the way.

With direct elections, there is a chance to have meaningful discussions about what should be prioritized in bargaining, how to deal with growing inequality and how to enforce safe working conditions. Direct elections can hold top leaders accountable — but changing the culture of the union requires members to step up.

Ending two-tier wages is clearly the key membership demand, yet successive contracts include two or more tiers, increase the number of temporary workers and allow more outsourcing. A member-driven union doesn’t leave the work to elected leaders, but comes together to think through its problems and possibilities, develops strategic campaigns that it carries out and then evaluates. Yet the challenge is even bigger when we consider that the companies we work for are global and the product we make is sold on a global market.

Instead of building strong relationships with autoworkers in other countries, particularly Mexico, UAW officials have encouraged a protectionist ideology. Where it has attempted to unionize U.S. plants owned by foreign corporations, it failed to develop a reciprocal relationship with the unions in those countries, and therefore weakened its own organizing drive.

There is an interesting model about how to carry out cross-border work. The UE has sent their members to help Mexican unions on their campaigns. In turn, they brought workers from those unions to help the UE here in the United States, particularly in plants with a Latinx workforce.

It’s clear that the unsuccessful union drives at Toyota and Volkswagen create a negative environment for challenging concessionary contracts. We strengthen ourselves and our demands when we are more unified. But even beyond these challenges, we face a serious issue as extreme weather teaches us that we cannot continue to use fossil fuels as our energy source.

Whatever Walter Reuther’s contradictions as UAW President back in what is considered the heyday of U.S. unionism, he attempted to anticipate the future of the industry and develop a plan. In contrast, the Administration Caucus seems to close its eyes to the restructuring of the industry. More than a decade ago UAW officials supported the corporate bailout of Chrysler and General Motors, as if our interests were the same.

At that moment, a group of autoworkers came together and drove in a caravan to Washington, DC to call for the federal government, which would own the majority of the stock, to transition to producing for mass transit. Over the years Auto Worker Caravan (AWC) has continued to call for mass transit instead of individual car production, opposed tiered wages and benefits, and supported the democratization of the UAW.

Building an alternative to the expensive, individualized, hazardous and inefficient transportation system of today remains a bold but necessary vision. Even with the last GM contract and the closing of several plants, the IEB offered no alternative.

Given that the UAW calendar calls for a Constitutional Convention with the election of top officers in 2022, even if UAW members win direct elections, will there be enough of an emerging network to contest the Administration Caucus’ hold on staff appointments and regional offices? For its part, the AC has built a deep bench of candidates through their institutional power.

How can the membership begin to develop a vision of the economy, and an idea about what workers might be able to contribute? That’s difficult given the culture of passivity the AC promotes. Whether strategizing in locals of auto workers, state employees, nurses, graduate students or amalgamated locals, the UAW must depend on the energy of its membership.