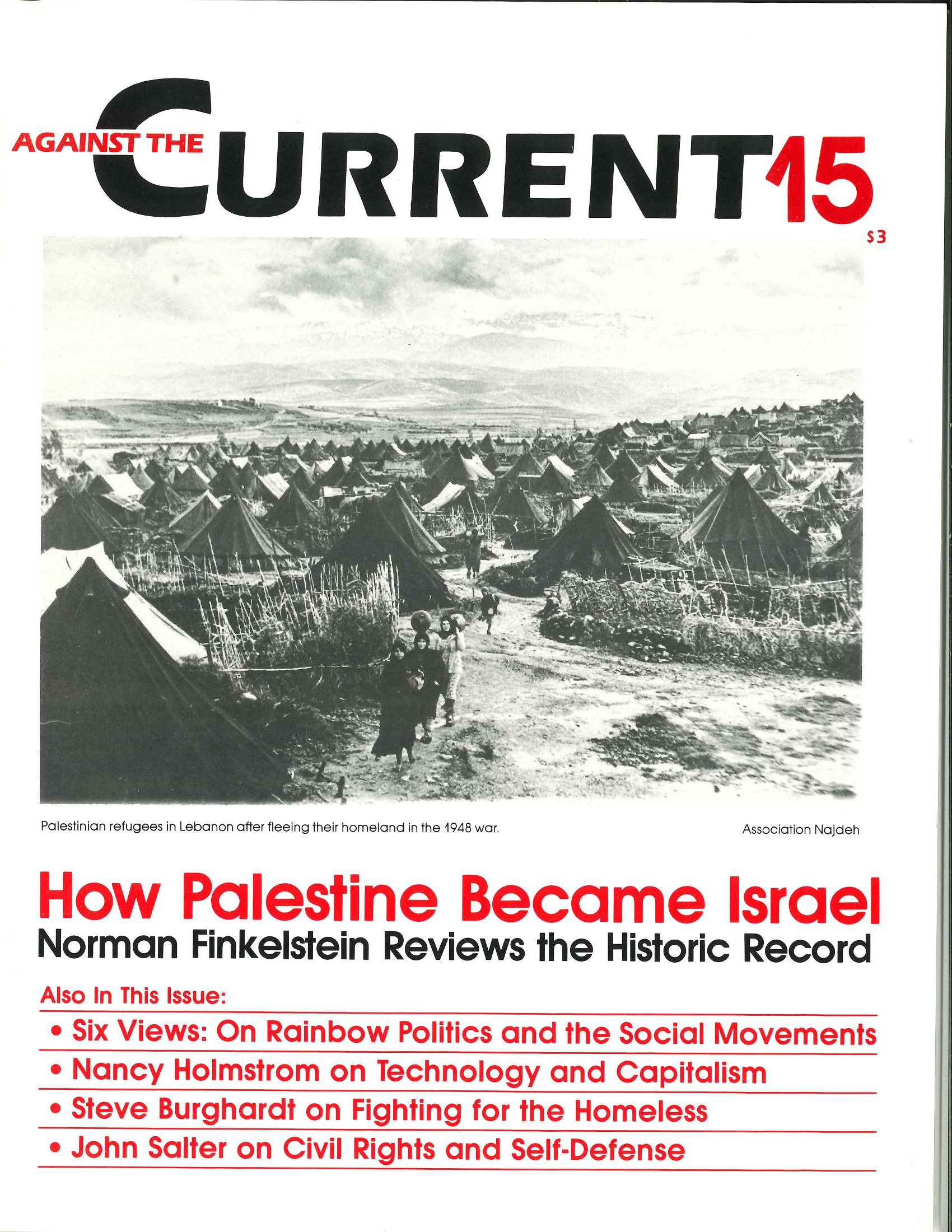 DR. CLAYTON CAMBRIDGE was a senior staff scientist at Consolidated Cybertech, Inc., an artificial intelligence venture in Massachusetts, until his sudden resignation earlier this year. Dr. Cambridge had dropped from public sight until he recently contacted our science editor, and gave us a portfolio of classified documents pertaining to a previously unknown “Project D.”

The following are excerpts from our interview with Dr. Cambridge, the first he has granted since his disappearance.

Q: Why are you coming out now with this stunning information about Project D?

A: It’s clear to me now that the experiment has gone too far. I’m having trouble sleeping; my hands shake from anxiety. I can’t bear to see its face on TV. At first I felt elated with each of its successes­ they reaffirmed the physical principles I pioneered. I felt the thrill of successful experimentation, but now it’s just gone too far.

Q: When did it all begin?

A: it began in 1969, with a breakthrough by Dr. Erich von Studenheimer, published in the Viennese Review of Physical Sciences. Dr. Studenheimer reported on an innovation in cybernetic interface advancement that held out the possibility of a fully programmable android. At the time, I had just come on staff at Consolidated. The project potentials were immediately obvious. The best engineers were drawn from the leading firms and universities for our project team.

Q: Why was the idea given such a top priority?

A: You have to understand the context of the times. We had just landed on the moon. Anything was possible. It was clear to all involved that America was entering a new stage, a new era. Our budget at the time was flooded by NASA funding. At the same time, riots were sweeping our inner cities, and antiwar rioting threatened to weaken our military establishment.

All the major think-tanks-Rand Corporation, MIT, Brookings Institute and Ford Foundation-were set to the task of engineering a new social reality. They envisioned a new America-of computer chips, space platforms, rationalized management, and a more cooperative and docile labor force.

However, this vision was impossible given the vagaries and swings of political ambition. Without controllable leaders, the intricate and complex economy proposed by these think-tanks would be frustrated. We were looking to develop leadership that not only understood the new technology, but was of it.

Q: And that’s where Project D came in?

A: Our first prototypes failed miserably. Their names are lost to history. We programmed them as Republicans, and no one bought it. That was the conclusion of the PITF.

Q: What is the PITF?

A: The PI1F is a necessary element of our success. The Personal Identity Task Force is in charge of molding the characteristics and positions of the entity. It concluded that only a Democrat could sell the people what they wouldn’t accept from a Republican. It also concluded that Massachusetts was an ideal proving ground for the project, given the state’s large pool of technical talent and its historic capacity for accepting change.

Q: What did the PITF finally come up with?

A: The PITF Working Report utilized polling data to establish a matrix for the ideal gubernatorial candidate. First of all, in our state, it had to be vaguely Kennedyesque without downgrading the desired sexless image. It had to seem liberal, but not too liberal. It had to be ethnic, but not too ethnic. This in particular was one of the most heated discussions within the Task Force.

A person of non-European heritage was obviously impossible. A northern European was too common; an eastern European was too politically risky. That left southern Europe. A significant faction wanted it to be Italian, but that was ruled out because of possible media backlash. Another faction favored Spanish due to the vote-getting potential, but that was ruled out because of minority connotations, and the faction settled on programming the entity to speak the language. Then one staff member hit upon Greek, which was just right. Our product would be the son of Greek immigrants-the perfect image of Americana.

Q: How did you develop its political positions?

A. It had to appear to lean toward populism, while fully cooperating with us. It had to seem to be a critic of militarism in order to facilitate public acceptance of its high-technology defense contracts. And of course there were some givens: it had to be uncritical of Israel, critical of homosexual rights, and so on.

Q: Where did the name come from?

A: Very simple. Someone on the staff opened a Boston phone book to the D’s, and looked for Greek names. Dimitrious, Domopolous — all too obvious and unpronounceable. Suddenly the name just leaped off the page — very Freudian and it rhymed with “caucus.”

Q. What were the first steps?

A: We had to establish a character history for the pre-1970s period, and make it stick. We made it a Korean War veteran who became a lawyer and then a legislator. Its record had to be so successful that other legislators wouldn’t admit they didn’t know it.

In 1971, after the initial construction phase, we put it on as a T.V. host for one of the PBS news programs we sponsor. This was our chance to refine its speech and movement patterns. Television was the key medium to building its image, and Nielsen surveys were a method of tracking its appeal. We adjusted every aspect of its being-from accent to eyebrows. The voice patterns were never really perfected; they’ve remained too measured and monotone to this day.

Q: How did you choose the timing for its political bid?

A: Watergate shook the country in 1974. Our window of opportunity opened up. Massachusetts voters were yearning for someone they could feel good about but not think about, and we gave it to them. Our product was elected, but unfortunately served only one term. It was too steady and predictable, and I admit we aimed too low in our expectations. From 1978 to 1982, we upgraded the circuitry, added some programs, and were very pleased with the result.

A: !t was re-elected to office and began introducing some of the reforms we had long sought. It began to create our model of a fully managed society. At last, some returns on our investment. The entity again had the advantage of timing, as defense spending was on the upswing. High-tech defense industries boomed along Route 128 outside Boston. Old factories in Lowell were revamped by computer firms. So many artificial intelligence firms located near the Charles River in Cambridge that the neighborhood became known as “A.I. Alley.”

At the same time, fora sustained candidate yield, we also programmed tax cuts, a raised minimum wage and a workfare program. Technocracy replaced bureaucracy. It was our wildest dreams come true. The experiment was successful — too successful.

Q: What do you mean by “too successful”?

A: We had programmed the entity to talk so much about the future that, on its own, it developed the unavoidable human characteristic of ambition. Just after the results of the 1984 national election, we noticed changes in its behavior matrix. Suddenly it developed a momentum of its own and began to draw more attention than we had anticipated. In short, it began to “think” that it should be president of the United States. It was a sad day when I realized how much the project had gone out of control.

Q: So why did you resign?

A: Several reasons. While I was concerned that the entity had gone off on its own, others on staff saw the perfect breakthrough to begin controlling the national scene.

I felt that the increased media attention in a presidential campaign would expose and possibly jeopardize the entire project. Press reports had already accurately described our product as “cold” and “bloodless,” with a “programmed message.” Others noted that it doesn’t drink, and described its daily kinetic discharge routine of power-walking as “elbows jabbing at counterpoint like the hydraulics on a steam train.”

This worried me. It was only a matter of time before some reporter would ask, “ls this guy in support of high technology, or is he high technology?” I decided to come clean, and warn the world, before it was too late.

A: It’s one thing for Project D to have become a governor. It’s another thing entirely to have it become chief executive and commander-in-chief of our nation. This could endanger the state of our international affairs, and particularly our delicate relations with the Soviets. And after all, who knows how much farther than ours their project has gone.