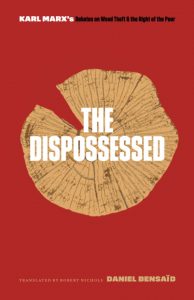 The Dispossessed:
Karl Marx’s Debates on Wood Theft
and the Right of the Poor
By Daniel Bensaïd
Translated by Robert Nichols
University of Minnesota Press, Minneapolis &
London, 2021, 160 pages, $25 paperback.

IN THIS RATHER unusual volume edited by Robert Nichols, we find his translations of Bensaïd’s 2007 title essay, as well as new translations of Marx’s five 1842 Die Rheinische Zeitung articles on wood theft, from which Bensaïd draws. Nichols also provides a substantial introduction in which he calls this collection an ‘experiment’ representing ‘a deliberately asynchronic juxtaposition.’

Nichols’ thesis is that the pieces by Bensaïd and Marx each perform an analogous function for their respective temporal and spatial contexts. In an important sense, although his introduction takes up less than a third of the volume, this text belongs more to Nichols than to Bensaïd or Marx. Specifically, he reads the two principle parts of the collection through a conceptual lens which he regards as crucial for understanding our own time, which he calls the ‘crisis of kleptocracy’ (viii). In addition to providing his own commentary on these texts, Nichols provides a helpful, though brief, overview of Bensaïd’s life and works emphasizing both the connection of theory to practice as well as Bensaïd’s evolution over time.

Nichols observes that Bensaïd’s essay arrives on the cusp of the great recession and should be understood as contributing to a cluster of analyses that attempt to conceptualize the events which proceed it, as well as corporate and state responses to it, including trillions of dollars of public funds spent to bail out private banks. Nichols notes that the transfer of public resources to private hands was theorized in a number of related ways, including the ‘primitive accumulation of capital,’ ‘enclosures of the commons,’ or David Harvey’s ‘privatization’ and/or ‘accumulation by dispossession’. As Nichols describes it, ‘each of these frameworks expresses a desire to find a theoretical vocabulary appropriate for naming the enduring (albeit uneven and punctuated) logics of capital accumulation via the coercive seizure of public goods and assets, as distinct from accumulation via the regularized exploitation of waged labor’ (x).

Considering the pairing of texts by Bensaïd and Marx, Nichols reflects on the former’s late interest in Walter Benjamin, particularly the latter’s rejection of linear history. Bensaïd emphasizes the revolutionary dimension of Benjamin’s messianic thinking. History is at every moment open to interruption, to the arrival of a revolutionary event. Nichols’ collection partakes deeply of this Benjaminian sensibility, perhaps even more than he indicates in his introductory essay. For Benjamin, by rearranging historical narratives, unseen possibilities and hidden truths can emerge. Nichols hopes that this volume does more than ‘retrieve’ the writings of Bensaïd and Marx for our time, but instead helps set the stage for contemporary interventions.

In his essay, Bensaïd returns to Marx’s wood theft articles in order to explore both contemporary and possible future dispossessions. What comes to be called wood theft emerges from a period of rural poverty where items such as berries, material necessary for the production of brushes, brooms, fishing rods, material for home repair, basket weaving and food for livestock, i.e. the objects ‘without which life itself could not be secured’, become contested. In this context, the Prussian state intervenes to resolve the conflict between rights of property and customary rights (9).

Bensaïd notes that Marx’s critique is in part aimed at the ontology of private property employed by parliament, whose only unifying concept is what serves the interest of the property owner. Hybrid or uncertain property is abolished to the detriment of the rights of the poor and their access to the common property offered by nature.

On Bensaïd’s reading, Marx’s approach is that of internal criticism, in which he uses the logic of property against the expansion of ownership rights. If an owner claims property rights over trees because they grow on his land or over timber which is transformed by labor, a consistent application of these principles would grant rights to the poor to gather fallen branches. If even this is theft, Marx writes, ‘[b]y regarding all attacks on property as instances of theft without distinction or further determination, would not all private property be theft?’ (11). Marx is here attracted to Proudhon’s What is Property? and will remain so up through the writing of The Holy Family.

Marx also criticizes parliament’s empowering private property owners to enforce and punish wood theft. These punishments included fines paid directly to the owners as well as forced labor. Bensaïd points out that for Marx, this represents public functions being taken over by the private sphere. Marx writes, ‘[t]he wood possesses the remarkable character such that as soon as it is stolen it secures for its owner state qualities it did not previously possess. […] The wood thief has robbed the forest owner of wood, but the forest owner has used the wood thief to steal the state itself’ (25).

Bensaïd interestingly connects these articles to other of Marx’s writings. The loss of traditional rights of the poor, excluding them from all property, Bensaïd states, resembles Marx’s famous formulation in ‘Introduction to the Critique of Hegel’s Philosophy of Right’ where he first introduces the proletariat, ‘a class with radical chains, a class of bourgeois civil society that is not a class of bourgeois civil society, an estate the dissolution of which would be the dissolution of all social estates’ (14). Though unmentioned by Bensaïd, Marx does not connect this early notion of the proletariat to commodity production and the particularities of profit making under capital, which will serve to distinguish the categories of the poor and the proletariat later on. Importantly, we see in both Marx and Bensaïd that two concepts require attention in this context: ‘dispossession’ and ‘the dispossessed’. As Nichols points out, though Bensaïd’s essay bears the latter title, his focus is on dispossession. We will return to the former concept shortly.

In mapping the history of dispossession both historically and conceptually, Bensaïd pays close attention both to Proudhon and Marx’s criticisms of him in The Poverty of Philosophy, where he derides Proudhon’s notion of fair exchange and fair wage as ahistorical, abstract and moralistic. Marx’s analysis of the commodity form found in Capital is key. As Bensaïd puts it, social relations are not between individual and individual but ‘between worker and capitalist, farmer and landowner, and so on’ (34).

Bensaïd then moves into the twenty-first century with discussions of the privatization of knowledge, the privatization of life (the interpretation of gene sequences) and the possible privatization of everything needed for life and the existence of society. He writes, ‘[i]n this period of market globalization and widespread privatization of the world, Marx’s articles on the theft of wood are of troubling relevance.’ Privatization pushes into all domains of life. Bensaïd refers to education, information, laws, money, knowledge and violence – ‘in short, public space as a whole’ (37).

Throughout this discussion, Bensaïd repeatedly matches Marx’s wit and insight. Consider: ‘could one go so far as to patent mathematical equations and subject them to property rights? The socialization of intellectual work begins with the practice of language, which is obviously a common good of humanity that cannot be appropriated’ (43). Reflecting on the operative logic of our times, Bensaïd writes further: ‘If computer science is a language, and if its innovations are patentable, can neologisms of everyday language become so? Concepts? Theories? To what unprecedented neuroses could this compulsion for intellectual property lead?’ (45).

These contemporary ‘enclosures’ are, for Bensaïd, direct obstacles to human growth and wellbeing or, in other words, they are contradictions of capital. Furthermore, he states the ‘ecological crisis has put back on the agenda the idea of inappropriable common goods of humanity’ (47). Water, he notes, is an obvious example with various international bodies declaring water to be a human right.

Returning now to the question of those who are dispossessed, Bensaïd briefly brings forward what amount to questions of the revolutionary or collective political subject. He states that ‘we are witnessing new forms of resistance of the dispossessed – those “without” (without documents, homes, shelter, employment, or rights) – in the name of the defense of public services, in the name of the energy and food sovereignty of countries subject to imperialist looting, in the name of common goods (e.g., water, land, air, life) coveted by cannibalistic companies or pharmaceutical firms on the lookout for new patentable molecules’ (48). Bensaïd’s linking of the category of ‘the poor’ with Marx’s conceptualization of ‘the proletariat’ noted earlier highlights this issue. Importantly, two different categories are operative here, though Bensaïd does not distinguish them in this essay. The dispossessed or those who are ‘without’ is clearly a different category than laborers subject to exploitation through the wage relation.

Nichols reads Bensaid’s essay as highlighting the political importance of the former category, claiming that Bensaid’s ‘energy and acumen drive us forward into a future in which the struggle will increasingly be led by “dispossessed”’ (xxii). This is clearly different from the struggle being led by those who are subject to exploitation at the point of production. Nichols argues for the importance of dispossession as a distinctive category of capitalist violence, not reducible to exploitation, nor simply a necessary condition of exploitation. He asks, ‘[w]hen your body is not even wanted as a tool of exploitation, what leverage do you have over the machinery of power?’ The answer is yet to be determined. The concluding sentence of Bensaïd’s essay fittingly points at both elements of capitalist violence, first to exploitation, then to dispossession: ‘Our lives are worth more than their profits: “Rise up, dispossessed of the world!”’ (57).

Bensaïd’s essay, as contextualized in this volume by Nichols, successfully pushes, especially those of a Marxist orientation, to make the idea of dispossession more central to their theoretical and practical work. With regard to Die Rheinische Zeitung articles contained in the volume, they are worth reading or rereading. Marx’s biting analogies and critical, sarcastic style as found throughout his works is in full display here. For example, he writes, ‘[w]e are only surprised that the forest owner is not allowed to heat his stove with the wood thieves’ (94). Finally, Nichols’ translation is a slightly modernized, slightly more readable version of the English translation by Clemens Palme Dutt, though much of the translation is identical.