“Women! Life! Freedom! I will kill those who killed my sister! Death to the Dictator! (Islamic Republic) Emancipation is our right! Our power is our collectively! Bread! Work! Freedom!” 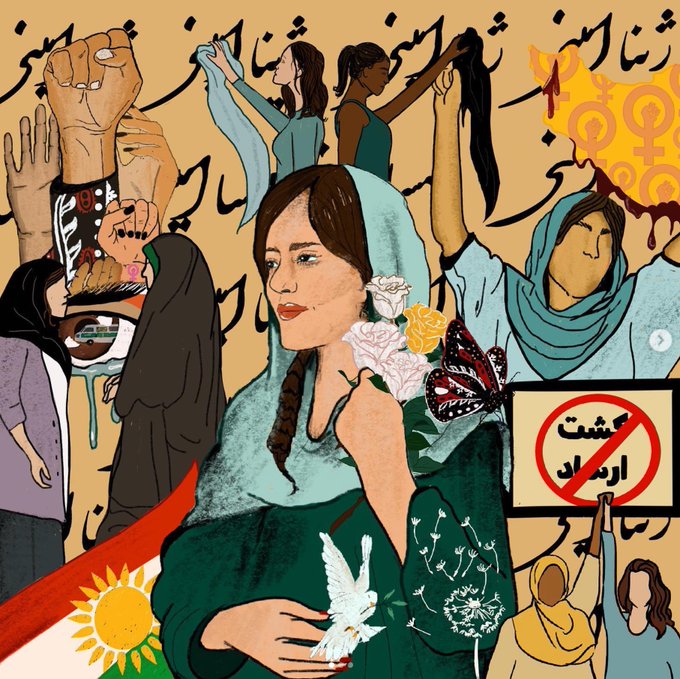 IN THE YEARS that the people of Iran have lived under the flag of tyranny of the Islamic Republic, they have faced all kinds of repressions and violence. With the inauguration of Ibrahim Raeesi as president in 2021, the executioner of the 1990s who led the murder of thousands of militant activists, including socialists and feminists, the level of repression has become even more than before.

Women, especially women of ethnic groups, religious minorities, the working class and urban poor, are among the groups that have experienced the greatest amount of oppression. Each of these groups is facing various economic, social and political crises, and at the same time, their very daily life is marked by resistance. Women are experiencing a myriad of oppressions, of which the mandatory hijab is one of the main forms.

However, Iranian women have never accepted the mandatory hijab and always struggled to repeal it through various forms of political and civil protest. In the past few days, with the murder of Mahsa (Jina) Amini by the agents of the Islamic Republic, another wave of the Iranian people’s uprising has started in many cities of Iran. What happened to Mahsa is so painful, shocking and terrible for the people of Iran that her murder has sparked national demonstrations and strikes in various places.

“Mahsa (Jina), you have not died! your name will become a symbol.” This is what is written on her grave. On September 14, 2022, Mahsa (Jina), a 22-year-old woman went to Tehran for a leisure trip with her brother from her hometown Saqqez, a Kurdish city in the west of Iran. A Guidance patrol which violently monitors women’s hijab and behaviour in streets arrested her in the Haqqani subway station in Tehran because she was not wearing an appropriate hijab. After beating up Mahsa, the Guidance patrol forces took her to downtown Tehran’s notorious Vozara detention centre. Mahsa suffered a concussion after a few hours in Vozara Detention Center due to severe beating and injuries. She was transferred to Tehran’s Kasra Hospital. After being in a coma for two days, she died.

The fact that Jina’s death is not an ordinary death and is a governmental murder, a murder that happens every day without a voice being raised in the media inside and outside of Iran, and it can also happen to every single Iranian woman, makes this a political issue for all Iranians.

On September 19, Kurds in several cities across Iran’s Kurdistan staged a general strike. Feminists have published a statement in at least two cities of Iran to organize a large gathering together with different sections of the society. As in the past, women are at the forefront of the protests and by taking off their scarfs, and they have shown that they are protesting not only against the hijab but also against the entire brutal structure of the Islamic Republic.

In the cities of Tehran, Rasht, Karaj, Diavan Darre and Dehglan, to name just a few, there have been scenes of the officers beating and shooting the people. Several people have been arrested or wounded and at least three people have been killed by the police forces. The names of these dead are Mohsen Mohammadi, Reza Lotfi and Foad Ghdimi. These protests and strikes will continue today and the days after.

What is the essence of the recent protests? One can find this in the slogans that have been used by the protesters around the country: “Women! Life! Freedom! I will kill those who killed my sister! Death to the Dictator! Emancipation is our right! Our power is our collectively! Bread! Work! Freedom!”