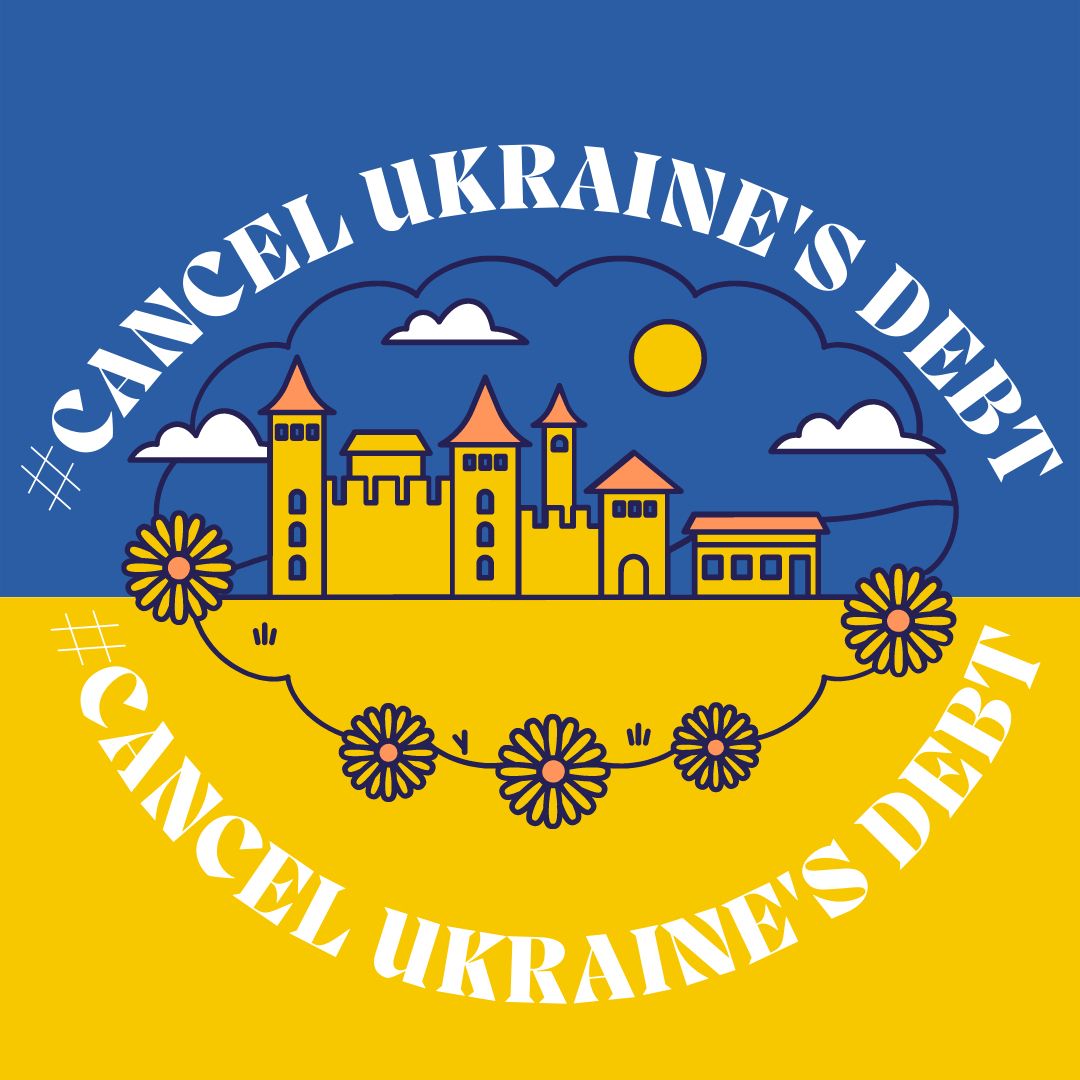 Eric Toussaint: Ukraine’s external debt, public and private, is about $130 billion, half of this debt is owed by the government, and the other half by the private sector. The government also has an internal debt of over $40 billion. Public external debt in the form of sovereign securities amounted to $20 billion in 2021, all of which (there were 14 issues of securities) are governed by English law and in the event of a dispute, the British courts can be called upon.

In 2021, the debt to the International Monetary Fund (IMF) amounted to more than $13 billion. The debt to the World Bank (WB), the European Bank for Reconstruction and Development (EBRD) and finally the European Investment Bank (EIB) amounted to more than $8 billion. The amounts to be repaid in 2022 for both the external and internal debt are enormous and unsustainable in view of the war situation.

And finally, there is Ukraine’s bilateral external debt to China, France, Germany, other EU countries, the United States and a $3 billion debt to Russia. Since the beginning of the Russian invasion, Ukraine’s public debt has increased significantly because the IMF and the World Bank have granted a new credit of $5 billion, and other multilateral financial institutions have also granted emergency credits. And the government issued more than $2 billion in new debt securities, called war bonds.

SD: What is the background of Ukraine’s indebtedness?

ET: Let me give you a short history of Ukraine’s indebtedness since its independence, a little more than thirty years ago when the Soviet Union collapsed at the end of 1991. Ukraine did not inherit any debt from the Soviet Union, so it started in a favorable situation, but in the process of a brutal capitalist restoration, the Ukrainian bureaucrats who restored capitalism benefited at the expense of the state coffers.

Oligarchs got extraordinarily rich at the expense of state assets just as it happened in the Russian Federation, Belarus, Kazakhstan, Tajikistan, etc. While a number of oligarchs were getting extraordinarily rich, they were supported by members of the government, who allowed them to acquire public property for a pittance. The government financed a large part of the budget with debt because the richest people in Ukraine were hardly taxed, they hardly paid any taxes.

The Ukrainian government systematically resorted to borrowing, including from private banks created by the oligarchs. While the oligarchs benefited from all kinds of aid from the state, they lent part of this money to the same state with an interest rate that allowed them to make large profits.

SD: Did the government resort to external borrowing as well?

ET: Yes, the government resorted to external borrowing. It issued debt securities on the international financial markets and also, borrowed from foreign banks. It borrowed from the IMF and the World Bank. The debt steadily increased from the 1990s to the 2000s.

The IMF set conditionalities while extending loans to Ukraine. The application of the shock strategy, with typical neo-liberal measures: liberalization and promotion of foreign trade, removal of price control of essential commodities, reduction of subsidies of basic items consumed by working people, the deterioration of a whole series of essential services.

The IMF also promoted the rapid privatization of state-owned enterprises. It set newer and newer targets for the reduction of public deficit. The IMF has compounded the insecurity of the labor market by facilitating lay-offs in the private and public sectors. The effects of the policies recommended by the IMF have been disastrous – an extreme impoverishment of the population, so much so, that in 2015 Ukraine was at the bottom of the ladder of all European countries in terms of real wages.

SD: Is there an important part of the Ukrainian debt illegitimate?

ET: The answer is yes: the overwhelming majority of the Ukrainian debt, if not the entire part, is illegitimate. It was not contracted in the interest of the population, it was accumulated in the interest of the richest 1% and international creditors; at the expense of a dramatic deterioration in the social rights and living conditions of the population. This took place before the outbreak of war and the Russian invasion of Ukrainian territory which took place twice, in 2014 and in February 2022.

Already before the two aggressions committed by the Russian Federation led by Vladimir Putin in 2014 and 2022, the debt claimed from Ukraine was a debt that did not benefit the population and it was absolutely normal to consider that this debt should not be repaid by the population.

SD: Which parts of the debt should be canceled as a priority?

ET: The debt claimed by the IMF, which is by far the largest among multilateral debts, should be canceled as it has played a direct role in the process of gradual destruction of the Ukrainian economy and in the drastic deterioration of the living conditions of a large section of the Ukrainian population. The IMF has also favored the enrichment of the richest one percent and fostered the rise of inequality.

A particular chapter must be opened in the context of the debt claimed by Russia from Ukraine. In December 2013, when Ukraine had Viktor Yanukovych as its president, who was closely linked to Putin’s regime, the Russian Federation convinced Ukraine’s Ministry of Finance to issue securities on the Dublin Stock Exchange in Ireland for an amount of $3 billion.

This was the first issue that was supposed to be followed by others to gradually reach $15 billion. So the first issue of securities amounted to $3 billion and all the securities sold in Dublin were bought by the Russian Federation through a private company it had set up in Ireland. The interest rate was 5%.

The following year, Russia annexed Crimea, which until then had been part of Ukraine. The Ukrainian government changed as a result of popular mobilizations, the exact nature of which is debatable as there was both a genuine popular rebellion and intervention by the right and extreme right.

There was also the will of Western powers to take advantage of popular discontent. It’s all quite complicated and I’m not in a position to make an analysis of the so-called Orange Revolution. The new government continued for a while to pay back the debt to Russia. In total, $233 million of interest was paid to Russia. Then in December 2015, the government decided to suspend the payment of the debt.

In brief, the Ukrainian government justified the suspension of payments by explaining that it had the right to take countermeasures against Russia because the latter had attacked Ukraine and annexed Crimea. And indeed under international law, a state has the right to take countermeasures and suspend the fulfilment of a contract in such circumstances.

The Russian Federation took the case to the UK courts in London. Indeed, it was provided that the securities were issued in accordance with English law and that in case of dispute the British courts would have jurisdiction. Therefore, Russia filed a complaint against Ukraine asking the UK courts to order Ukraine to resume payment. The proceedings started in 2016. At the moment, the British courts have not yet delivered a final judgement, which should be pronounced in the next weeks or months.

It is worth noting that at first the British magistrates, notably the principal magistrate who was in charge at the beginning of the proceedings, was none other than William Blair, Tony Blair’s brother, who had until recently very close business links with Putin’s Russia. He tended to rule in favor of Russia since the UK judiciary wants to remain attractive to investors. Tony Blair’s brother issued a judgement in March 2017 in which he did not accept a series of obvious arguments put forward by Ukraine.*

William Blair considered that there had been no real coercion of Russia by Ukraine. He considered that this was not a conflict between states. He accepted Russia’s claim that the company that bought the Ukrainian securities (The Law Debenture Trust Corporation PLC) is a private entity. However, in reality, this company is acting directly on behalf of Russia and it is Russia that actually bought all the securities.

Subsequently, the Court of Appeal challenged William Blair’s ruling and now the case has reached the final stages in the Supreme Court.

As Russia invaded Ukraine at the end of February 2022 with a huge loss of life and war crimes, it is difficult to foresee the Supreme Court siding with Russia against Ukraine in this case. The judgement will be heavily influenced by the dramatic turn of events in the conflict between Russia and Ukraine. If the Court recognizes that Russia has exercised duress against Ukraine and that Ukraine has the right to take counter-measures, this will set a precedent and other states will be able to invoke this precedent in their dispute with creditors. So it’s an important issue.

SD: What is the CADTM’s position on the cancellation of the Ukrainian debt?

The CADTM in demanding the cancellation of the Ukrainian debt in this manner joins an international petition which was launched after the invasion of Ukraine by social movements and individuals who are in Ukraine and resisting the invasion.

The signatories of this petition rightly state: “Chaotic borrowing and antisocial debt conditionality was a result of total oligarchization: unwilling to fight the wealthy, the state rulers kept getting deeper in debt. Loans were issued under conditions of social spending cuts, and their repayment forced to economize on vital needs and apply austerity to foundational economy sectors.” This is enough to demand the cancellation of the Ukrainian debt.

SD: What is the Ukrainian government doing?

ET: It is indeed very important to ask this question: what is the Ukrainian government doing? Instead of suspending all debt payments in order to meet the needs of the population and to resist external aggression, the Ukrainian government, in a purely neoliberal approach, is maintaining debt repayments, except for the debt claimed by Russia.

We are therefore in an extremely serious situation. While the government ought to suspend the payment of the debt, it is absolutely determined to remain credible in the eyes of the financial markets and the various lenders, and so it continues to allocate considerable sums of money from its budget to pay off the interest on the debt.

What this government also does is borrow more money. It issues war bonds that are sold on the financial markets. So the Ukrainian government is increasing the debt, it has also increased its requests for credit from the IMF, the World Bank, the European Bank for Reconstruction and Development, the European Investment Bank and bilateral creditors.

It continues to implement neo-liberal policies of anti-social austerity, arguing that extraordinary efforts are needed to achieve resistance to the Russian invasion. The government has decreed that workers must work longer; that they must take less leave; and it has made it easier for employers to lay off workers in the midst of a war situation.

I think that the policy of the existing government needs to be denounced. We should adopt a completely different approach: suspending the payment of the debt, asking the country where the assets of the Ukrainian oligarchs are located to expropriate these assets and return them to the Ukrainian people. Of course, it is also necessary to expropriate the Russian oligarchs and transfer their assets to a reconstruction fund for Ukraine under the control of social movements.

The Ukrainian government should also impose a war tax on the richest 1% to finance the war effort. An audit of the debt should be carried out with the participation of the citizens because the debt has reached such proportions that it is absolutely inconceivable not to name those responsible for the totally reckless indebtedness carried out by the previous and current governments.

*See the commentary by Monica Feria-Tinta and Alister Wooder, Sovereign debt enforcement in English Courts: Ukraine and Russia meet in the Court of Appeal in USD 3 bn Eurobonds dispute

Committee for the Abolition of the Illegitimate Debt 21 April 2022