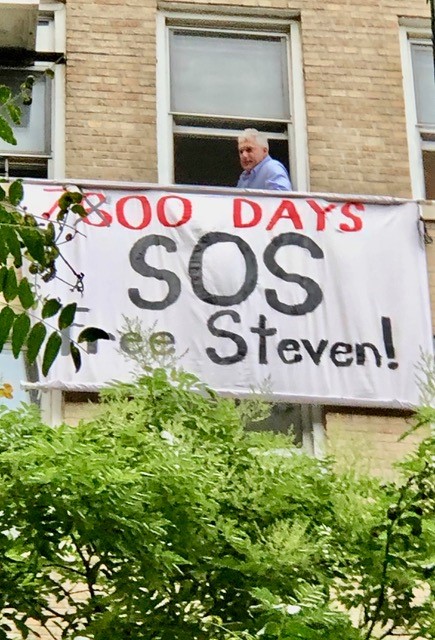 WE SHOULD CARE, first of all, because the principle of “an injury to one is an injury to all” demands it of us. But there is much, much more to the Donziger case than the victimization of a single courageous individual. It should be thought of as a compound or multilevel injustice, with its outrageousness compounding at every level.

The first level—the underlying injustice in the Donziger case—is of the greatest social significance imaginable. It is the Chevron oil company’s decades-long environmental destruction of 1,700 square miles of the Amazonian rainforest in Ecuador. The deadly consequences of that ecological devastation for the Indigenous communities who inhabit the area make Chevron’s misdeeds a crime against humanity. More than 2,000 Ecuadorian Amazonians have died from oil-related environmental cancers and many others have suffered from an epidemic of miscarriages and birth defects.

The second level is Chevron’s weaponizing of the American legal system in an attempt to destroy a human rights attorney who dared to try to hold them accountable. Steven Donziger is that attorney. He was not a lone crusader but part of a legal team that has pursued justice for the Indigenous Ecuadorians for almost 30 years. They won an unprecedented judgment against Chevron in the Ecuadorian courts—an award of more than nine billion dollars to compensate victims of the oil company’s poisonous mess. Chevron, however, has thus far evaded paying it by refusing to acknowledge the court’s ruling, leaving Ecuador, and launching a massive legal counterattack against Steven Donziger in U.S. courts. The malicious prosecution is designed to intimidate human rights lawyers everywhere and to warn them against challenging deep-pocketed and politically-connected corporations. The legal system of the United States has never been so blatantly perverted by corporate power as in this case.

“The legal system of the United States has never been so blatantly perverted by corporate power as in this case.”

Here is a nutshell account of the very complex history of this decades-long struggle:

In 1964, the Texaco oil company began drilling for oil in the Ecuadorian Amazon, and for decades the corporation treated the public waters and lands of Ecuador as its private garbage dump, dumping billions of gallons of toxic waste and spilling billions of gallons of crude oil. In so doing, it seriously damaged the physical environment, and with it the health of 30,000 Indigenous people who depended on those lands and waters for their lives and livelihoods. All of this was illegal under Ecuadorian and U.S. law, but the dictatorship that had come to power in Ecuador in 1963 with CIA help turned a blind eye to the American oil giant’s wanton pollution. Subsequent governments followed suit for many years.

In 1993, fresh out of Harvard Law School, Steven Donziger was one of a group of attorneys who filed a lawsuit in New York against Texaco on behalf of Indigenous people in the Ecuadorian Amazon who were suffering from the oil company’s unlawful dumping. Texaco and its successor, Chevron, believing Ecuador’s legal system would be easier to manipulate, fought for nine years to have the case tried in Ecuador rather than in the United States. In 2002, the oil company got its wish: The U.S. court ruled that if Chevron would pledge to accept the Ecuadorian courts’ jurisdiction, the case would be tried in Ecuador. Chevron accepted that proviso. In 2006, however, a populist political upsurge brought a government to power in Ecuador that was less susceptible to foreign corporate influence. In that changed political context, Ecuador’s Supreme Court in 2013 awarded a $9.5 billion settlement to Chevron’s indigenous victims. Chevron, unsurprisingly, reneged on its promise to honor the Ecuadorian courts’ ruling. 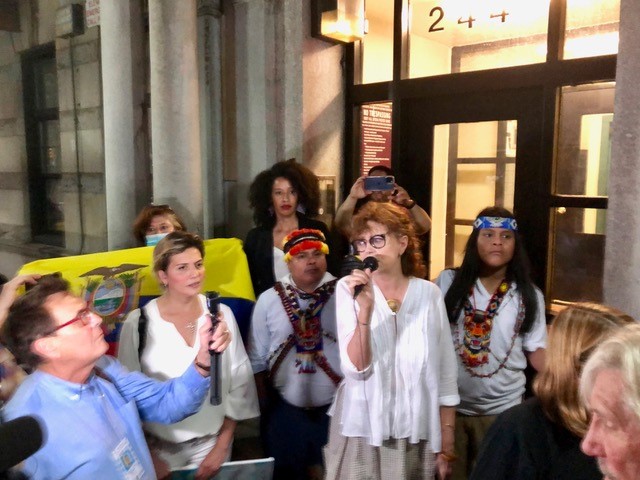 Free Donziger! rally with Susan Sarandon (center) and representatives of the Indigenous people of the Ecuadorian Amazon.

Chevron retaliated by using its massive financial resources and political influence to launch an all-out campaign of demonization against Donziger. Lewis A. Kaplan, a U.S. District judge, has collaborated closely with Chevron in its effort to crush Donziger, and has also enlisted another U.S. District judge, Loretta Preska, in the unholy crusade. Preska is closely allied with the Chevron-funded Federalist Society, which leads a systematic campaign to stack U.S. courts at all levels with rightwing judges.

Judge Kaplan backed a demand by Chevron that Donziger hand over to them his computers, cell phones, and printed files full of privileged and confidential information. When Donziger refused, as any ethical lawyer would and should have, Kaplan charged him with criminal contempt and ordered that he be held under house arrest. No lawyer accused of contempt of court in New York had ever previously been similarly held for more than 90 days. As of July 6, 2021, Donziger had spent 700 days in home confinement. Meanwhile, when public prosecutors declined to take on the case, Judge Kaplan appointed private lawyers—from a firm that has Chevron as a client!—to act as prosecutors.

“When public prosecutors declined to take on the case, Judge Kaplan appointed private lawyers—from a firm that has Chevron as a client!—to act as prosecutors.”

In the past year, international efforts to defend Donziger have gained traction. Sixty-eight Nobel laureates, including 10 who had received the Nobel Peace Prize, demanded that Donziger be freed, and that Chevron be held accountable for its criminal poisoning of the Ecuadorian Amazon. And on September 1, 2020, more than 200 lawyers filed a judicial complaint documenting Judge Kaplan’s numerous violations of the judicial code of conduct in what they called his “abusive targeting of human rights advocate Steven Donziger.” The complaint was also signed by 37 legal organizations representing 500,000 lawyers in eighty countries around the world.

The struggle continues.
* Drop the prosecution against Steven Donziger
* Free Steven Donziger from house arrest
* Hold Chevron fully accountable for its unspeakable crimes against the indigenous people of Ecuador
For more information about the case: