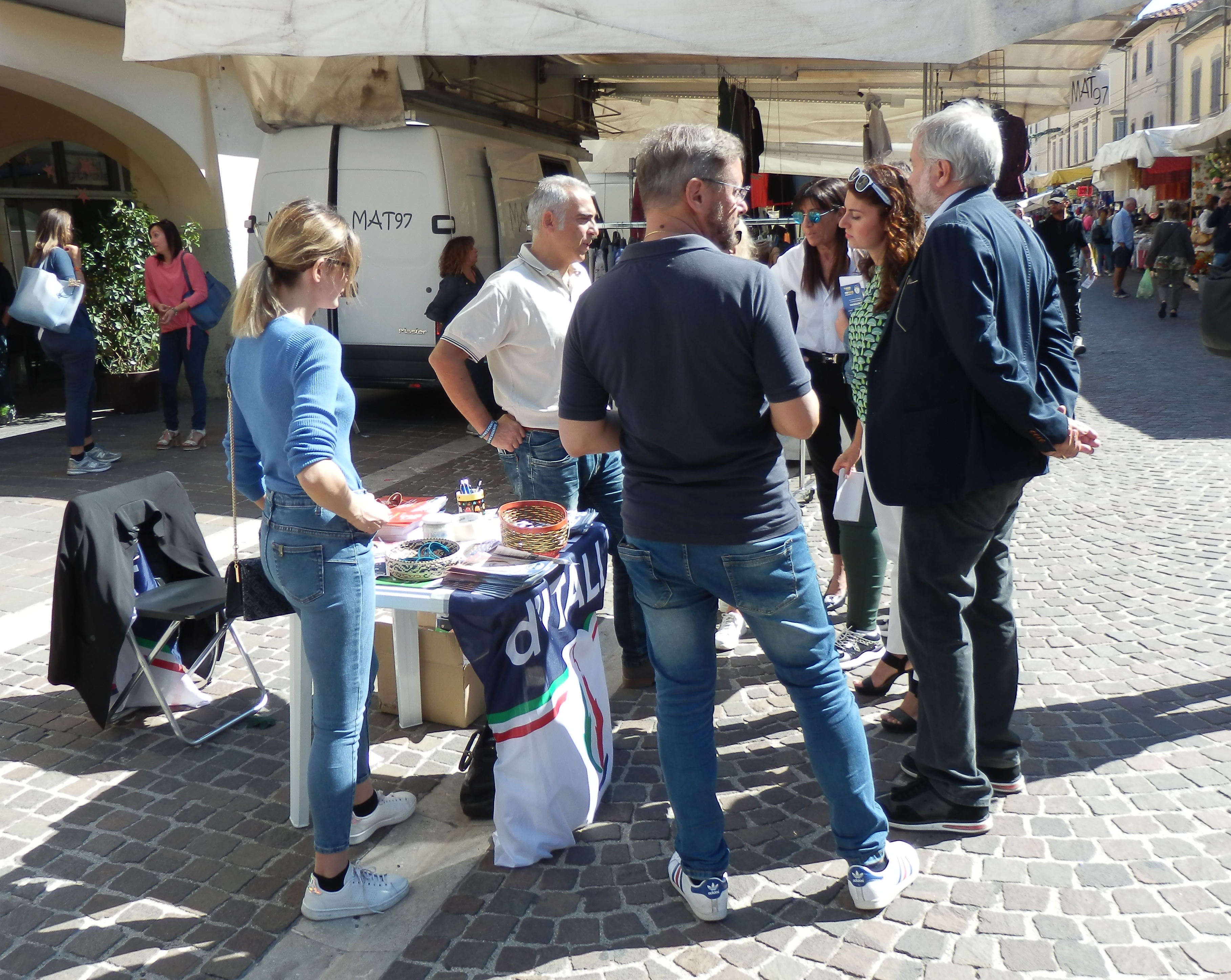 THIS ARTICE WAS written shortly before the official election victory of Giorgia Meloni’s “Brothers of Italy” party. For readers not familiar with rugby terminology, the phrase “convert the try” is roughly equivalent to “kick the extra point” in North American football. –The Editors

Not since the end of the last world war has the threat of a reinvigorated, aggressive and almost universally rising far right been felt as much as today. Why is this so? Because, contrary to what happened during the last six or seven decades, this threat no longer comes from a few small groups or even small parties of nostalgic people from the interwar period, but from a new, unabashed right-wing that governs or is about to govern even countries that arecatalogued among the greatest powers in the world!

Modi’s India, Putin’s Russia, Bolsonaro’s Brazil, Orban’s Hungary, and soon Giorgia Meloni’s Italy and maybe Trump II’s United States, the picture is far from being exhaustive but it still gives an idea of the seriousness of the threat that now hangs over humanity. Far from being all avowed nostalgics or “heirs” of the fascism and nazism of the inter-war period, these leaders are united by their racism, xenophobia, authoritarianism, islamophobia and anti-semitism, their open rejection of parliamentary (bourgeois) democracy, their misogyny, their adoration of fossil fuels and climate skepticism, their militarism, their contempt for democratic rights and freedoms, their police conception of history and their belief in conspiracy theories, their hatred of the LGBTQ community, their obscurantism and their visceral attachment to the triptych “Family-Patriarchy-Religion.”

To call them “populists,” as all the European media systematically do, is a totally inappropriate euphemism, especially since these same media also call “populist” the left that dares to challenge neoliberal capitalism. So if Bolsonaro, Meloni or Abascal of Spanish Vox are “populists,” why not … Mussolini, Hitler or Franco too? Why not rewrite the whole history of the last 100 years, erasing any reference to the Brown Plague reduced to an almost harmless “populism”? Obviously, in the night of the neoliberal counter-revolution, all racists, misogynists, pogromists, neo-fascists and other right-wing extremists are no longer brown but rather… gray. In short, almost harmless “populists”…

But far be it from us to label all these people as (neo)fascists or (neo)nazis, without distinction. In reality, not only are they not all the same, but they also have their differences, which explains their rivalries and the struggles for influence in which they traditionally engage. In short, the European (and world) far right is not homogeneous and although it is constantly progressing as a whole, it is its ruthless and most violent wing that is currently rising the most and has the wind in its sails.

It is precisely from this ruthless and violent wing that the initiatives for the structuring and coordination of this extreme right at the international level come. For example, VOX, strengthened by its spectacular breakthrough in Spain, has launched with some success its “Madrid Forum” to bring together in Latin America all the aspiring fascist putschists as well as parties and personalities of the extreme right. It should be noted that what sets the tone of the “Madrid Charter” signed by the members of this openly fascist Forum is the visceral hatred for the indigenous people, whose genocide (by far the largest in human history) by the Spanish conquistadors is celebrated as an act of… “liberation from the bloody and terrorizing regime of the Aztecs”!

What is, at first glance, curious about this “Charter of Madrid” addressed to Spanis speakers is that it is also co-signed by parties and personalities of the extreme right that have nothing to do with Latin America or with the Spanish language. Thus, among its adherents we find the Trumpist eminences of the North American Republican party, the Greek Solution party (about 5% in the last elections) of Kyriakos Velopoulos, that TV shopping swindler who became famous when he sold, for months, even “authentic manuscripts” of. …Jesus Christ, or the post-fascist party Fratelli d’Italia of the next Prime Minister of Italy Giorgia Meloni, who has a very privileged relationship with her “camerati” of VOX.

Here is a first attempt to regroup the forces of the hard right, which could represent a first step towards the constitution of a real Brown International that many far-right parties seem to wish to see. However, the current absence of such an International does not mean that there is not even close collaboration between several of these extremist forces. Their meetings and other “summits” of their leaders are now legion. As are the manifestos and joint declarations that conclude them. Their financial assistance, the most famous of which is that of Putin’s Russian banks to Marine Le Pen’s party, is no longer a secret. And sometimes, this financing even crosses the Atlantic when it is a question of bringing down an enemy that is too troublesome.

As for example, when this enemy is called Greta Thunberg, the inspirer of the radical movement of the world’s youth against the climate catastrophe. This is how we concluded, three years ago, a text with the more than eloquent title “The hatred against Greta: here are those, with name and address, who finance it,”* in which we presented those who on the other side of the Atlantic were financing European far-right parties that were campaigning against Greta:

“First of all, the European far right, or at least some of its heavyweights, have close ties – if not dependencies – with a political and economic center/staff that is in the United States, specifically the White House and the financiers and other supporters of President Trump! Secondly, it is also no coincidence that this”brown international“seems to have come to the conclusion that the issue of climate catastrophe and more precisely, the – increasingly broad and radical – youth movement fighting against it represents the greatest threat to its interests and to the domination of the capitalist system in the years to come. And finally, it is no coincidence that this”Brown International“and more precisely its European”section“is today concentrating its attacks on the person of Greta Thunberg, the undisputed muse, theorist and at the same time coordinator of youth mobilizations almost everywhere in Europe and beyond.”

In short, the links between the extreme right-wing formations exist, are powerful and are developing as quickly as their electoral influence. So, are we going to see the European and global far right move up a gear and « convert the try » by founding its own ambitious, well-structured and far more dangerous International? There is no lack of desire and it is now being expressed publicly, as Victor Orban did when he received a standing ovation from thousands of Trumpist Republicans at the CPAC convention in Dallas (Texas) on August 4, when he declared: “We must coordinate the movement of our troops, because we face the same challenge… I am here to tell you that we must unite our forces”!

Without doubt, the most likely victory of the extreme right in the Italian elections of September 25 could significantly alter the political landscape and the political balance of power in our continent. So it is not at all impossible that such an event will accelerate the rise of some and the crisis of others. Moreover, in anticipation of this electoral victory of Fratelli d’Italia and its allies, we can already see leaders such as Orban or Abascal — and even Putin — adopting a much cruder and more offensive language, while on the other side, the European Commission prefers to be “conciliatory”, sending, already in December 2021, even its vice-president, the Greek Margaritis Schinas, to represent it at the annual gathering of the young Italians of the extreme right!

The conclusion is that the result of the Italian elections combined with the very likely success of the Trumpists in the American mid-term elections next November risks creating a new situation marked by a huge leap forward for this triumphant far right. So the very real prospect that Putin could join forces with a re-installed Trump II in the White House in two years’ time should be taken very seriously by anti-fascists and democrats around the world who need to prepare their fightback as soon as possible. With or without a Brown International, the far right is now an existential threat to us all.