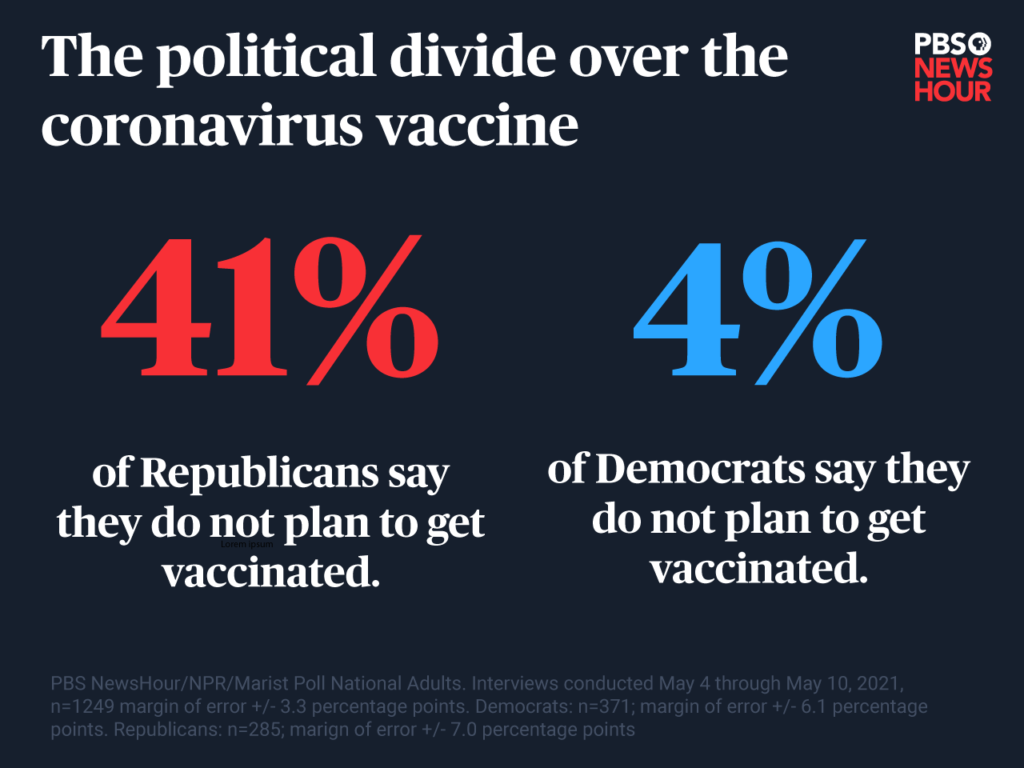 One nation divided, with paranoia and pandemics for all.

THE URGENCY OF the need to contain the terrible effects of the Covid-19 pandemic has generated a divisive social issue in the United States and around the world. The reason one word in the title above is in all capital letters is to emphasize the centrality of that issue. As you read what I have written here, I urge you to keep your eye on the ball and not be distracted by peripheral matters. “To vax or not to vax?” is a handy way to remember it, but here is a fuller formulation:

Do the widespread public health vaccination programs constitute the most promising approach to defending ourselves against the Covid-19 pandemic that has already claimed more than five million lives worldwide?

On one side of the polarized social issue are those who advocate a public health program to vaccinate almost the entire global population as by far the most likely way to stop the pandemic from inflicting further death and destruction. This point of view is supported by the overwhelming majority of public health advocates and scientists who study viruses and epidemics. Here is their message to the public:

The Pfizer and Moderna vaccines are safe and highly effective. When your turn comes to get the vaccine, take it!

That is the advice of Dr. Norman Oliver, Health Commissioner of the State of Virginia. I do not quote him as a voice of unchallengeable authority, but as representative of the near consensus of public health officials throughout the United States. These conscientious public servants have in recent months been subjected to a vicious campaign of harassment, including death threats, from those who call on the public to reject and resist the vaccination programs. The latter, to whom I give the shorthand designation “antivaxxers,” actively spread disinformation designed to discourage people from receiving Covid-19 vaccines. I characterize them as “scoundrels” for their efforts to deliberately undermine public health.

A few weeks ago a friend sent me a long, detailed treatise by one Julius Ruechel that presented an apparently fact- and evidence-based case for the antivax position, and asked me to comment on it. I wrote a partial response that challenged one of Ruechel’s core arguments. My response was published in a few on-line socialist periodicals–Against the Current, Climate & Capitalism, Socialist Action and forthcoming in Socialist Voice — and a number of readers responded. Although many made valuable points that I had not included in my limited article, one in particular added a very important dimension to what I had written. It appeared on Against the Current magazine’s website and was authored by Frank Rosenthal, professor emeritus of health sciences at Purdue University:

I think it is important to distinguish the “scoundrels” promoting the antivax movement from the many honest people that are influenced by it. Cliff’s piece makes the important point that simply because vaccines are produced by profit- seeking corporations, that does not invalidate their widespread use. However, it does not address the valid concerns of many of the people taken in by the antivax movement, which include:

1. The lack of confidence in government regulatory agencies in properly regulating product safety and keeping the public informed.

2. The historic exploitation and oppression of people of color, particularly African-Americans, by government agencies and corporations in matters involving medicine and public health. (Some examples: the Tuskegee syphilis studies, forced sterilization policies, studies showing discrimination by medical providers, failure to address racial disparities in the pandemic.)

3. The historic role of corporations in essentially lying to the public in matters relating to health and safety.

4. The facts that there are some risks to vaccines and that vaccines are not 100% effective (which are not always well communicated.)

5. The dismal track record of federal and state governments in controlling the COVID-19 pandemic and protecting workers and public health.

I think efforts to discredit the antivax movement and promote the widespread use of COVID-19 vaccines are more likely to succeed if they address, or at least acknowledge, some of the concerns listed above.

I completely agree, and incorporate his suggestions by reprinting them here.

The circulation of my article prompted another commentator, Bruce Lesnick, to add a lengthy contribution to the discussion. It repeats many of Julius Ruechel’s specific technical arguments and strongly opposes my critique. I felt obliged to respond again, but not in the same way. With Ruechel, I was able to determine that his superficially “leftist” antivax arguments were counterfeit. His underlying ideology is indistinguishable from the rightwing, ultralibertarian creed of Ayn Rand or the Koch brothers. I perceived Ruechel’s tract as a bad-faith argument that needed to be exposed as such, rather than a good-faith position requiring a carefully reasoned response.

By contrast, I know Bruce Lesnick to have been active for many years in the same antiwar and social justice movements in which I have participated. I respect Bruce’s intellect and integrity, but I think his antivax position is seriously mistaken and dangerous, and my purpose here is to respectfully present the reasons why.

Bruce began by accusing me of muddying the water with ad hominem arguments. It is in his title: “Name-Calling and Hand-Waving Don’t Constitute an Argument, nor will they lead to an effective Covid-19 response.” I realize that this will require a digression from the crucial issue, “To vax or not to vax,” but Bruce has called attention to matters of polemical etiquette that deserve to be addressed.

Before the “age of unreason” ushered in by Donald Trump, the New York Times’ reputation for decorum and good manners earned it the nickname “The Gray Lady.” But Trump’s tsunami of lies and verbal abuse changed all that. Early on, the Times’ official editorial board, realizing it could not bring a cream puff to a knife fight, described the sitting president of the United States in these words: “Mr. Trump is not just racist, ignorant, incompetent and undignified. He’s also a liar.” You can hardly get more ad hominem than that. And yet who could deny that saying these things was necessary to counter Trump’s demagogy?

The point is that although bare-knuckle polemics featuring ad hominem attacks are definitely not conducive to reasoned discussion, the norms that previously served to keep the “national conversation” at least somewhat civil have been shattered. In that context, it is fully legitimate to call Ruechel’s screed a screed, which is itself replete with ad hominem sallies. For starters, his title characterizes the vast majority of public health officials and scientists who support the mass vaccination strategy as “snake-oil salesmen” and con men.

I believe Bruce is off base in his contention that “scientific arguments stand or fall on their own merit, regardless of the political beliefs of the person proffering them.” That is a noble ideal to which a great deal of lip service has been paid, but it has almost nothing to do with the way science has actually developed throughout history. One noteworthy example is the famous “Tragedy of the Commons” essay by Garrett Hardin that unfortunately has had way too much influence in the environmental sciences. Hardin’s white nationalist and xenophobic views were totally relevant to the content of his “scientific” work. And similarly, Julius Ruechel’s ideology was the primary determinant of his antivax conclusions and cannot be left out of account.

Bruce also faults my stated unwillingness to dissect Ruechel’s arcane minutiae in detail. I said it would be too time-consuming, but I should have stated why it would take too much time. I am neither a virologist nor an epidemiologist, and to attain the necessary expertise to analyze Ruechel’s specific technical assertions would require years of study. I assume that is true of almost everyone who is presently reading these words.

How, then, can I have the chutzpah to express an opinion on this controversy? As a historian of science, I have had training and experience in evaluating the trustworthiness of assertions made in the heat of scientific disputes. It has equipped me with what some might indecorously call a “bullshit detector.” Ruechel’s essay set its alarms a-ringing bigtime.

One obvious giveaway is Ruechel’s claim to absolute knowledge. “From day one,” he declares, “it was 100% inevitable and 100% predictable that these vaccines would never be capable of eradicating this coronavirus.” (The emphasis was his.) If you ever hear any self-styled epidemiologist saying that anything about viral diseases is 100% predictable, it should set off your bullshit detector’s bells and whistles, too.

The close-up appearance of Ruechel’s tract as evidence- and fact-based dissolves as you back up and perceive it as forest rather than trees. The specific facts, regardless of their individual truth-value, are collectively devalued by having been cherry-picked to fit a pre-existing narrative—in this case, the antivax narrative. It calls to mind the familiar observation that every word of a bad-faith argument, including “a” and “the,” is a lie.

For example, Ruechel cites a number of facts that in isolation are in perfect harmony with something Frank Rosenthal wrote in the comment I quoted above, “that there are some risks to vaccines and that vaccines are not 100% effective.” But whereas Rosenthal’s concern is to improve the effectiveness of appeals to overcome vaccine hesitancy, Ruechel’s is to exaggerate the risks and less-than-100% efficacy of vaccines as a scare tactic to encourage vaccine hesitancy.

The lesson to be drawn is that a skilled practitioner of the dark polemical arts can isolate potentially valuable epidemiological facts and transmute them into misleading factoids. As William Blake’s insightful couplet explains:

A truth that’s told with bad intent
Beats all the lies you can invent.
—William Blake

Finally, let us bring the digression to an end by refocusing on the forest rather than the trees, and return to the essential issue: “To vax or not to vax?” The forest, in this analogy, is the truly massive aggregate of data drawn not only from clinical trials but from the experience gained by the inoculation of hundreds of millions of people, which clearly testifies to the safety and efficacy of Covid-19 vaccines of many provenances, including both mRNA and traditional types. As I said at the outset, I don’t doubt Bruce’s sincerity, but by taking on the burden of acting as Ruechel’s lawyer, he has me questioning his ability to see the forest for the trees.

One thing should be obvious: The science of the Covid vaccines is far from settled. The rapidly mutating Covid variants may or may not outrun the vaccine researchers’ ability to keep up. In the bigger picture, vaccines are only a technological quick fix that does not address the underlying, systemic socioeconomic problems that are sure to create future pandemics. All of this is true, but none of it negates the present urgent need to promote, not discourage, global Covid vaccine uptake. I appeal to everyone reading this to combat the pernicious anti-vax efforts of all ideological stripes.