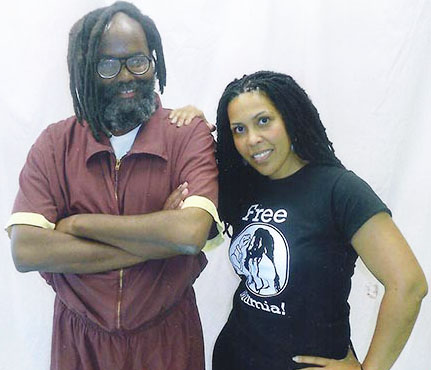 History is not merely something to be read. And it does not refer merely, or even principally, to the past. On the contrary, the great force of history comes from the fact that we carry it within us, are unconsciously controlled by it in many ways, and history is literally in the present in all that we do. –James Baldwin

THREE WEEKS AGO, on Friday, February 26, 2021 Mumia Abu-Jamal called Pam Africa, the person largely responsible for keeping alive the movement to save and free him for 40 years. Mumia told her that he was certain he had COVID-19; that he was having difficulty breathing as well as chest pressure and pain.

Within two hours of that call, the movement to free Mumia mobilized hundreds of supporters to call the prison and the Philadelphia District Attorney’s office to demand immediate medical care for Mumia and his immediate release.

Tried and true, the call-to-action worked. The next day guards entered the imprisoned radio journalist’s cell and without notice, escorted him to the prison infirmary. On Monday, Mumia’s attorneys inquired about their client’s health with the Pennsylvania Department of Corrections attorney who reported that Mumia had been tested for COVID over the weekend and the results were negative. None of us had heard from Mumia directly, however.

Amid tension, worry and stress (Pam Africa’s blood pressure shot up near the 200s), the movement issued a press release and prepared for a press conference in front of the DA’s office that Wednesday, March 3. We emphasized that Mumia reported serious COVID symptoms including chest pain— despite the negative test results reported by the prison. Near the end of the press conference, which was being streamed-live on YouTube, Mumia‘s attorney Bob Boyle phoned saying that the PA DOC attorney reported that a fourth test came back positive. Mumia had COVID 19.

But the PA DOC attorney failed to paint a full picture of the situation to Mumia’s attorneys. A clear sense of what happened emerged minutes after the conclusion of the dramatic press conference. Mumia happened to call from the prison infirmary as we were breaking down our impromptu stage; and there —in front of the Philadelphia DA’s office —he shared what actually happened: the day after he spoke with Pam Africa, guards came to Mumia’s cell and escorted him first to the infirmary and then to the hospital where doctors determined that he had water in his lungs and throughout his body. During four-days of hospitalization, the doctors informed him that he had COVID and Congestive Heart Failure and that ten pounds of fluid had been drawn from his lungs and body. As he was painting a picture of what he underwent, I thought of connecting him to his chosen doctor, who asked if he felt that he had been treated compassionately in the hospital. Mumia responded with a rote yes, said that he felt better, but emphasized that the most sobering challenge before him was to have to once again attempt to get a handle on the other crisis, the Job-like skin condition of biblical proportion that disfigured his entire body with open sores everywhere five years ago and that was back.

On another call, days later, Mumia’s breath was labored. When the imprisoned Black Panther called, I asked if he thought he was having a COVID relapse. He said, “nah, I think it’s my skin, it feels like my entire body is on fire.” When I suggested that he might need to be hospitalized to address this intractable, severe and debilitating chronic skin condition, the tension in Mumia’s famously calm voice jumped a few notches. He said that he couldn’t go back to the hospital. Mumia’s reaction resembled that of Complex-PTSD. I moved slowly in the conversation to try to understand what was going on. I suggested that he might have to be re-hospitalized for his skin condition. It was then that Mumia recoiled, saying that he couldn’t go back to the hospital. Recognizing from the sound of his voice that I was entering sensitive territory, I probed. Mumia had spoken to his wife, to Pam and to me numerous times in two weeks, but it took a trigger to reveal a situation that was hard to hear.

In the approximately five minutes remaining of this timed, monitored and frequently interrupted prison call, I learned that per Department of Correction protocol, this sixty-six-year-old man diagnosed with COVID and Congestive Heart Failure, undergoing diareses and with an infernal skin condition, was shackled to the bed for four days during his recent hospitalization. He explained that while he had wounds all over his body, the bloody wound of his lower leg — captured in the photo taken by the nurse at the prison infirmary upon his discharge— he got from the shackles that dug into his already raw skin during the entirety of his four day stay in the hospital. He added that the nurse missed the ones on his other leg and the ones on his lower arms.

The movement decided to release photographs taken of Mumia upon his arrival at the prison infirmary from the hospital. The photo of the bloody wound on Mumia’s lower leg caused by the shackling and another showing Mumia with bloodshot eyes, noticeably gaunt —he had lost 30LBS — looking at the camera with gut-wrenching vulnerability.

The practice of shackling incarcerated people is commonplace across the United States. In fact, it is ordained by politicians and corrections “professionals” of all stripes who’ve been riding the coattails of Black Lives Matters denouncing White Supremacy in the public square but enforcing it in the daily practices of their institutions. Recall that Jacob Blake was shackled to a hospital bed after police in Kenosha had shot and paralyzed him from the waist down. Police unshackled him only after protesters exposed the gross injustice. In each of these cases, authorities cynically justify their inhumanity with a supposed concern for safety. But, if safety is the measure of their actions, why do they insist on holding old men and women who pose no threat to society in their COVID infected prisons? Safety is camouflage and pretext for the practice of authoritarian control that daily erodes standards of freedom for everybody in society.

Loud and clear are the echoes of slavery, which —as Eric Williams shows in Capitalism and Slavery — for the first time in human history produced the global distribution and mass use of handcuffs, shackles and fetters because after all, enslaved Africans had to be brought to heel.

The inhumanity of the COVID crisis —and its spread in the prisons, which are now death traps — is eye-opening for those in close proximity to it. And Mumia is not alone in his suffering. When 77-year-old Russell Maroon Shoatz, a Pennsylvania political prisoner with stage-four colon cancer, was diagnosed with COVID, medical staff sent him to a small, cold, dank prison gymnasium where others with COVID were being quarantined under inhumane conditions. When Maroon arrived, he was greeted by 29 other senior prisoners who said to him: “Welcome, we’ve been waiting for you, we figured it wasn’t long before you got it too.” In these already cramped quarters, 30 elderly men with COVID had access to one bathroom stall. In a phone call with his daughter, Theresa Shoatz, Maroon reported that because his corner of the gym had no light, he had to go to the bathroom on himself because under his condition he couldn’t risk getting up and falling. As Dr. Ricardo Alvarez stated, for Mumia, Maroon and many others, “the only treatment is freedom.”

The decision of most governors to hold prisoners captive under these conditions, and their refusal to decarcerate even during a pandemic, is a crime against humanity. They underscore America’s entrenched commitment to racist barbarity. In the last 40 years, US incarcerated people have grown old serving life or decades-long terms in an indefensible system committed to excessive and draconian sentencing. Today’s reality has turned US prisons into cruel, old people’s homes for poor Black and Brown workers warehoused at the height of urban deindustrialization in the 1980s and 1990s, when American capitalism could not employ large swaths of city dwellers.

But these tortuous conditions aren’t the only problem. It’s about Americans’ right to know how society’s most powerless are treated, for in the end that’s a barometer of how we are all going to be treated. Arbitrary, whimsical, and sometimes deliberately deadly decisions are made daily by prison officials and corrections officers. Like so much in government bureaucracy, decisions that carry enormous weight in how we act as a society are vested in the hands of a few who are ill-equipped to decide public policy but are all too eager to wield their limited power to inflict cruelty on the prisoners they view as less than human.

That’s why at the very least, prison reform organizers and abolitionists are demanding the release of aging people in prison (RAPP) over the age of 50 or with pre-existing conditions, who face premature death if they contract the flu, cancer, hepatitis, pneumonia, COVID-19 or congestive heart disease, as in Abu-Jamal’s case. The only humane recourse is to let elderly and vulnerable prisoners go home. Ultimately, we want a society in which social problems are not solved with carceral repression.

The inextricable link between incarceration and standards of democracy in a country led the Russian novelist Fyodor Dostoevsky to observe that, “The degree of civilization in society can be judged by entering its prisons.”

Mumia spent 28.5 years in the absolute isolation of death row, without the ability to touch another person. In 2011, a federal court overturned that sentence arguing that it was unconstitutionally imposed on Mumia. In 2018, six boxes of new evidence in his case emerged. One of those boxes contained a letter penned by Robert Chobert, the original prosecutor’s star witness in the case of Mumia Abu-Jamal. In that letter, Robert Chobert asks then Assistant District Attorney Joe McGill, where’s my money and what do you need me to sign for me to get it. This suggests what we’ve known all along—that Robert Chobert —like other witnesses— was bribed by the prosecutor to finger then award-winning radio journalist Mumia Abu-Jamal as the shooter of a white police officer in Philadelphia. This year marks the 40th year of his incarceration. It’s time to bring Mumia, and all sixties-era political prisoners, home.