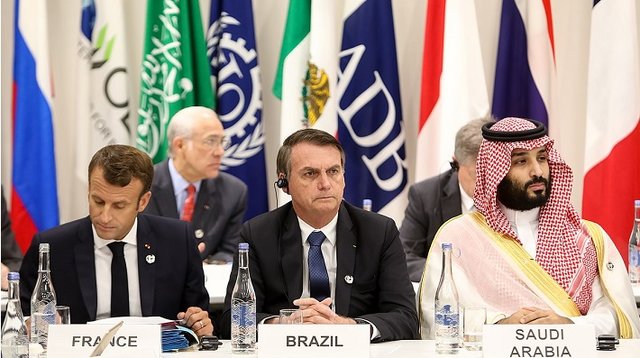 Last April, the G20 countries launched the idea of debt service suspension by poor countries until the end of 2020. What actually happened?

Measures taken by the G20 regarding debt relief are utterly insufficient as well as unacceptable since they involve intensifying neoliberal policies.

The fact is that measures taken by the G20 regarding debt relief are utterly insufficient as well as unacceptable since they involve intensifying neoliberal policies. The G20 considered that only 73 out of 135 Developing Countries (DC) could possibly benefit from rescheduling the repayment of bilateral debt (i.e. from country to country. This covers at best 1.6% of the DCs’ public external debt. If a country wishes to reschedule payment of its bilateral debt, it must commit itself to implementing a neoliberal program imposed by the International Monetary Fund (IMF). The limitations are such that only 46 countries subscribed to the G20’s initiative. It has to be underscored that the G20 does not grant any cancellation, only rescheduling of part of the debt.

To escape this spiral, debt repayment must be suspended and other measures taken: enforce a special tax on large fortunes, levy fines on companies responsible for major tax evasion, freeze military spending…

In these times of pandemic do you think it is legitimate to assert the right to suspend debt repayment to meet the needs of the populations?

When a government calls upon the state of necessity or a fundamental change of circumstances, the legitimate or illegitimate nature of the debt does not matter. Even if the debt claimed is legitimate, the country can still suspend payment

Yes of course. There are solid legal arguments to support a decision to unilaterally suspend debt repayment. Here are two. The state of necessity: a government can stop paying its debt because the objective situation is a severe threat to the population and further repayment prevents it from meeting the population’s most urgent needs. This is exactly the situation that many of the world’s countries are now facing: the lives of their citizens are under direct threat if they are unable to finance a whole range of urgent interventions to save as many human lives as possible. A fundamental change of circumstances: the execution of a debt contract may be suspended if circumstances have changed beyond the debtor’s control. Jurisprudence on this point acknowledges that a fundamental change of circumstances can prevent the execution of an international contract. When a government calls upon the state of necessity or a fundamental change of circumstances, the legitimate or illegitimate nature of the debt does not matter. Even if the debt claimed is legitimate, the country can still suspend payment.

A substantial increase in public health spending will have major beneficial effects to fight other diseases that plague mainly countries of the South, notably in Africa. An estimated 400,000 people die each year from malaria, mainly in Africa. Tuberculosis is one of the ten leading causes of death in the world. In 2018, 1.5 million people died of it. Deaths due to diarrhoea amount to more than 430,000 per year. About 2.5 million children die each year worldwide from malnutrition, either directly or from diseases related to their low immunity due to malnutrition. Such diseases and malnutrition could be successfully fought if governments devoted sufficient resources to health care instead of repaying debts.

What country could be mentioned as an example for deciding to suspend debt payment?

From November 2008, Ecuador suspended repayment of most of its debt as advised by a committee for an integral audit of the debt in which I participated as representative of the CADTM. In concrete terms the country put an end to paying interest on securities that had been sold on Wall Street for $3.2 billion. The international financial media were outraged. But in June 2009, creditors of 91% of the concerned securities accepted a loss of 65%. This meant that Ecuador had won over $300 million a year over twenty years. This haircut made it possible for the government to increase social expenditure over the years 2009-2010-2011, notably on health care. The people’s living conditions sharply improved. Ecuador’s victory on its creditors was complete. And when the country turned back to the financial markets, investors rushed to provide loans.

Wasn’t there a turning point in Ecuador in 2011?

When Rafael Correa became president in 2007, it was thanks to the social mobilizations that marked the 1990s until 2005. Without them his proposals would not have resonated so widely and he would not have been elected.

When Rafael Correa became president in 2007, it was thanks to the social mobilizations that marked the 1990s until 2005. Without them his proposals would not have resonated so widely and he would not have been elected. Unfortunately, after a good start, he antagonized a large part of the social movements and opted to modernize the extractive export model. His successor, Lenin Moreno, broke with Correa and went back to the brutal implementation of neoliberal policies. Once again, only social mobilizations will be able to overcome those policies and put the anti-capitalist structural changes needed for people’s empowerment back on the agenda. In October 2019 the CONAIE and other trade unions, feminist associations and environmental groups came together to draft an excellent alternative proposal to capitalist, patriarchal and neoliberal policies; that proposal should be used as a basis for a vast government program.(1)

The issue of illegitimate debt and of rejecting IMF and World Bank policies is once more at the forefront of social and political struggles.(2) In a file published by over 180 popular Ecuadorian organizations in July 2020 we find the following demand: “suspension of external debt repayment and an audit of the external debt that has accumulated since 2014, as well as citizens’ control on the use of contracted debts.”(3)

Source: The first three questions and answers were published in the weekly magazine L’Humanité dimanche of 14 to 20 January 2021. The fourth question and answer were added afterwards.

from Committee for the Abolition of Illegitimate Debt