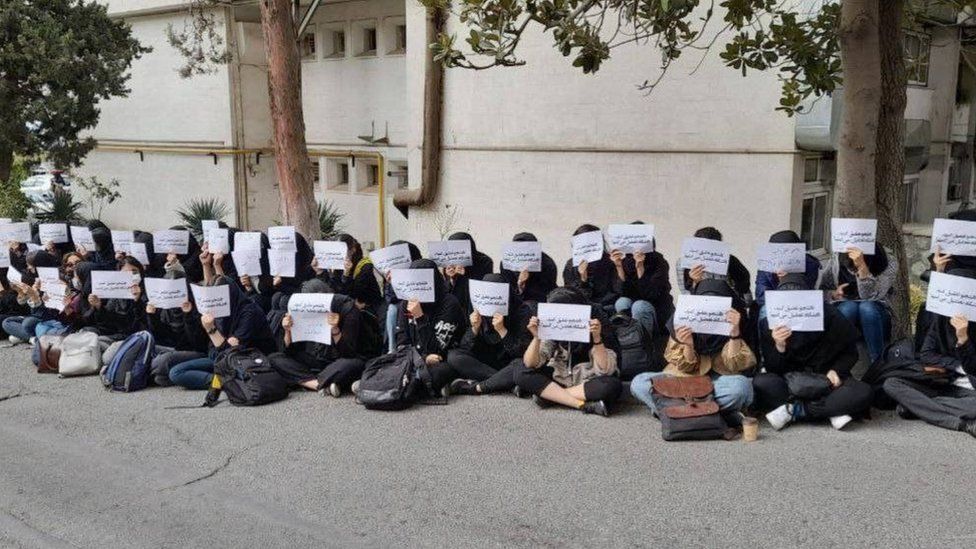 THE THREE DAYS of protests announced by Iranian university students early in December to mark Student Day was a clever choice. They knew it was not going to be supported by royalists. Student Day commemorates three leftwing students, Ahmad Ghandchi, Shariat-Razavi and Bozorg-Nia, who had been protesting against the visit of US vice-president Richard Nixon on December 7 1953. They were shot and killed by the shah’s police.

Meanwhile, videos from many Iranian cities confirm that shops were closed and many workers went on strike for at least a day in most of the country’s larger production plants. Protestors used nightfall to demonstrate and shout slogans — although in some cities, including Tehran, the season’s first cold weather reduced numbers.

On December 3, attorney general Mohammad Jafar Montazeri was asked, “Why was the Gasht-e Ershad shut down?” The Gasht-e Ershad (literally “Guidance Patrol”) is the so-called “morality police.” Montazeri dodged the question by stating that it had “nothing to do with the judiciary,” and was “established elsewhere in the past.” But, of course, “the judiciary will continue to monitor everyone’s behaviour in the community.”

The statement came at a time when there is talk of “decriminalising” the “poor hijab” and replacing this with a penalty system, based on CCTV and face recognition systems that will issue immediate fines.

All this was followed by conflicting reports about whether there were actual plans for dismantling the Guidance Patrol. It is certainly true that during the last few weeks of mass, nationwide protests we have not seen much of the Guidance Patrol, but this could be because the Islamic Republic of Iran’s police force has used all its strength to deal with this unprecedented display of opposition. That, or it could be that this controversial section of the religious police has been told to stay away to avoid further confrontations, given its role in the detention of Mahsa Amini, whose death sparked the current explosion of protests.

But if anyone thought this was a sign of the regime retreating in the face of mass protests, it is now clear that this was not the case. The head of Iran’s judiciary, Gholam Hossein Mohseni-Eje’i, announced that an unspecified number of protestors had been given death sentences. They were accused of “corruption on earth” and “waging war against god.”

On the one hand, given the seriousness of the crises and mass dissatisfaction, the authorities have been calling the protestors “thugs,” who are agents of foreign powers, acting in “mobs.” On the other hand, leaked information makes it clear that there is considerable debate on how to respond. Apparently Iran’s supreme leader, Ali Khamenei, has been intervening in these debates at every level.

Last week, following a cyberattack on Fars News, the propaganda arm of Iran’s Revolutionary Guards (IRGC), a group called Black Reward managed to copy data and subsequently released it. Iran is accusing Israel’s Mossad of responsibility. Among the videos shown by the group there is footage of the terrible conditions in the country’s prisons and Black Reward has also published a series of secret official documents. Some of these show the inefficiency, corruption and power struggles at the highest levels. Clearly in these circles everyone admires the “emperor” (ie, the supreme leader), but no one admits that the crises unfolding before their very eyes could end up challenging the ayatollah’s rule.

According to these leaked documents, a special bulletin prepared by media experts for IRGC commander-in-chief Hossein Salami notes that the Basij paramilitary organisation is too weak to stop the protests. Indeed, at least 115 military personnel have been arrested on charges of participating in the ongoing protest movement.

The leaked documents cited “experts” as saying that there is “a considerable amount of doubt and uncertainty among the revolutionary forces” (meaning the regime’s own forces, of course). Additionally, Fars officials noted that the protest movement “considers the greatest achievement of the recent riots to be the loss of fear. Protestors are no longer scared of the military and police forces.”

Other documents reveal that Iranian officials also expressed concerns that the government of president Ebrahim Raisi was disorganised when dealing with the protests. Parliamentary speaker Mohammad Baqer Qalibaf was recorded as telling Khamenei that the “government does not have a plan or a goal and they cannot make a decision. They are confused.” It seems that the supreme leader agreed that the government was lacking a plan and was slow.

The papers claim Khamenei also expressed opposition to large numbers of protestors being indicted on the charge of “waging war against god,” noting that the justice system had stopped issuing such indictments after an order he issued.

The leaks demonstrate the obvious contradictions between various official statements and reality, although there is nothing new in this. In a bulletin published in June, dealing with the protests against price rises, it was stated that the opposition wanted to “kill” government officials. However, according to the latest dossier, three of the four people killed were shot by the IRGC. During those protests, the IRGC’s methods of repression were so bad that “a very intense conflict broke out between the governor … and the commander of the IRGC, ending up in a shouting match witnessed by the crowd.”

Fars bulletins have a special section about “rumors” related to the leader of the Islamic Republic, which show how he interferes in even minor matters. This can be seen in the last few weeks when Khamenei ordered the security forces not to arrest a local leader for dissent over the official line, but instead try to “dishonor” him.

Some “experts” referred to by Fars have expressed concern that “recent issues have caused doubts among the revolutionary forces and led to differences within the revolutionary front.” Of course, leaking this type of information could itself be part of a deliberate attempt to portray Khamenei as a “wise” leader!

In the bulletin dated December 3, after more than two months of protests, we read that “the opposition is using propaganda making a lot of noise and people have accepted that it is a nationwide disturbance.” The self-deception is amazing.

However the truth will out. Fars News reports that “some government employees from the office of cultural heritage, from the ministry of education, as well as university staff from the medical sciences, were present at the protests. They were effective and played a role as leaders.” No wonder that in the same bulletin, as revealed by Black Reward, Mohammadreza Naqdi, deputy coordinator of the IRGC and former commander of the Basij, tells us that “this generation is lost and you have to let them go and raise a new generation.”