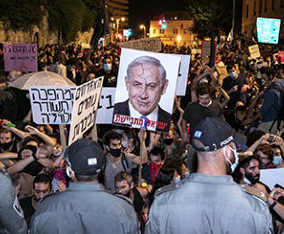 THE ZIONIST COLONISATION regime spreads a nauseating stench – literally. I am referring to an Israeli invention, appropriately named ‘Skunk’ and described as a “non-lethal weapon of mass control”. It is a liquid used by Israel’s armed forces on its colonial subjects as a means of crowd control as well as of collective punishment – jets of it are sprayed from special armoured vehicles in public spaces and into private homes. It is a smash-hit Israeli export, manufactured by the ‘left’-Zionist kibbutz, Beit-Alpha, and marketed to forces of repression (‘law enforcement’) around the world.(1)

“Imagine taking a chunk of rotting corpse from a stagnant sewer, placing it in a blender and spraying the filthy liquid in your face. Your gag reflex goes off the charts and you can’t escape, because the nauseating stench persists for days.”(2)

Your clothes? Your home’s soft furnishing? You may as well bin them, as they will stink for months, if not years.

During the month of Ramadan (which this year lasted from April 12 to May 12), Israel’s heavily armed border police erected barriers, preventing crowds from gathering in their usual meeting place: the plaza outside the Damascus Gate – the only public open space available to the inhabitants of the Muslim quarter of Jerusalem. When this led to the predictable angry protests, the police removed the barriers, but deployed the Skunk abomination against the crowd gathered in the plaza.

The stench spread deep into the Muslim quarter. For tens of thousands of people, who fast in the holy month during daylight hours, this was an especially cruel torture, as the Skunk-induced nausea makes it is almost impossible to eat and drink – let alone enjoy the sunset Iftar meal, breaking the fast.

The Ramadan repressions – during which heavily armed Israeli gendarmes rampaged through the compound around the ancient Dome of the Rock and al-Aqsa mosque, wounding hundreds of protestors – happened to be part of a triple assault by the colonial regime of Jewish supremacy on its Palestinian subjects. By a calendrical quirk, Jerusalem Day – in which fanatical religious Zionists celebrate the anniversary (according to the lunisolar Jewish calendar) of the conquest of East Jerusalem in the June 1967 war – fell this year near the end of the (lunar) month of Ramadan.(3)

Both Ramadan and Jerusalem Day coincided with the culmination of long-standing machinations of ethnic cleansing against Palestinian Arab families in the East Jerusalem neighbourhood of Sheikh Jarrah. These three components, like the three components of gunpowder, produced an explosive mixture.

Some of the plots in Sheikh Jarrah belonged to Jews before 1948. Following the 1948 war, when this area fell under Jordanian rule, families of Palestinian refugees, victims of mass expulsion (the Nakba), were housed there as tenants. According to Israeli apartheid law, the former Jewish owners retain their rights of ownership. But the Palestinian refugees of 1948 do not have a reciprocal right: they have forever forfeited their property, which was confiscated by the Zionist state, for use by Jews.

Since 1967, groups of extremist Zionist settlers have been acquiring the rights (according to Israeli law) from the heirs of the former Jewish owners of such properties, or acting with the latter’s consent, with a view to evicting the Palestinian tenants and extending Jewish colonisation. Their long-term plan can be deduced from what has happened in Hebron. A small contingent of messianic settlers established themselves soon after the 1967 war in properties formerly owned by Jews. Step by step, they managed to enlarge their domain, harassing the indigenous Palestinian inhabitants and confining them to ghettos. A similar process is now beginning in Jaffa, threatening the remnant of its Arab community, a minority that survived the Nakba.

A long and complex legal battle between the Palestinian inhabitants of Sheikh Jarrah and the settlers – reminiscent of Bleak House – has now come near to conclusion. Israel’s courts are, of course, guided by racist legislation, motivated by Zionist ideology and heavily biased against Palestinians. The prospects are bleak indeed.

Thus, the struggle of the Palestinian families in danger of eviction has come to a head precisely during the Ramadan events in and around the Holy Mount. The two protests merged and fed each other. In both cases the protestors faced brutal repression – and have won widespread, active support of Palestinians in all parts of Palestine/Israel.

As a token of solidarity, a few largely ineffectual rockets were shot from the Gaza Strip. Israel responded in its habitual barbaric way, by aerial bombardment, murdering 20 people, including nine children. Hamas responded with more rockets and Israel escalated further.

This year Israel’s Jerusalem Day fell on Monday May 10. The usual sadistic (and sex-segregated) celebrations of the conquest and illegal annexation of East Jerusalem involve mobs of sweaty, ecstatic, flag-waving, fanatical men – dance-marching through the old city, taunting its Arab inhabitants, attacking them and damaging their property. In comparison, the Orange marches in Northern Ireland look almost like friendly festivals of goodwill. In combination with the Ramadan repressions and the Sheikh Jarrah threatened evictions, this depraved parade was certain to ignite an almighty conflagration.

But at this point the US stepped in. Fearing the reaction of the world’s two billion Muslims, the Biden administration ‘advised’ restraint. That was echoed by America’s camp followers – laughably known as ‘the international community’. The obedient media took the hint. After long months of strange silence about Israeli atrocities and internal crisis of corruption, after confining reports to good news and trivialities, the servile propaganda press (such as The Guardian) and broadcast channels (such as the BBC) suddenly started reporting something about the events in Palestine/Israel. Not impartially, of course – you would not expect that, would you? But at least something approaching news.

Binyamin Netanyahu – embattled in his trial for bribery and corruption, and wondering, as per usual, how to turn the Jerusalem events to his personal and political advantage – also had to take the hint. First, the court’s ruling on the threatened Sheikh Jarrah eviction was postponed till calmer days. Then the religious-Zionist zealots were banned from entering the holy compound, so preventing a provocation that could have led to a bloodbath. And at the last moment the in-your-face Jewish supremacist dance-march was rerouted away from the most sensitive areas of the old city.

All this has not put an end to the unrest in the whole of Palestine/Israel. As I write, violent demonstrations, bloody clashes and vengeful atrocities committed by the Israeli military are being reported. But it could have been even worse – much worse.

And it will not get essentially better until the root cause is extracted. The cause is not Israeli apartheid, or Jewish supremacy, or messianic fervour. These – however important they may be – are just political and ideological means that serve to implement and legitimise the basic cause: the long-standing and ongoing Zionist project of colonisation.