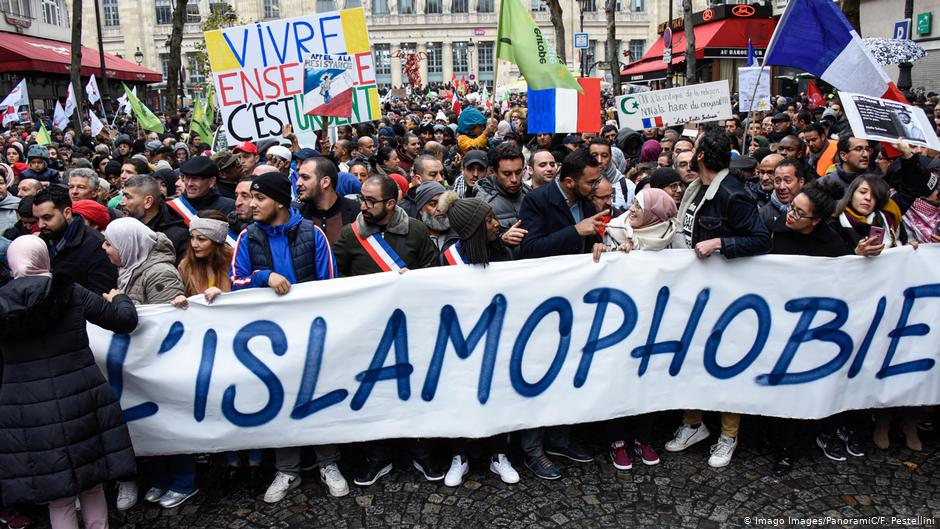 Thousands demonstrated in Paris and Marseille in October, after a gunman with links to the far right attracted two men at a mosque in Bayonne.

THE CONTINUOUS GROWTH of Islamophobia in France can be understood both in view of its current socio-economic and political context as well as in its colonial and imperialist heritage. On the one hand, the French government is trying to make people forget its socio-economic difficulties by the policies of stigmatization and exclusion of Muslim populations. On the other hand, the “defence of religion and an authentic Islamic identity” serves as a screen on the political and economic agenda of Islamic fundamentalists.

In recent weeks, France has seen an unprecedented deepening of the Islamophobic and authoritarian policies of the ruling classes, through the government of President Macron. This orientation comes at the height of the socio-economic crisis, following the murder of teacher Samuel Paty and the Nice attack, perpetrated by people claiming to hail from a jihadist ideology, which carries a fundamentally reactionary social project.

Assaults and violence against Muslim populations and their places of prayer have increased. At the same time, Macron’s government is threatening to ban and dissolve more than 50 Muslim associations, such as the Collective Against Islamophobia in France (CCIF), whose role is to provide assistance to victims of Islamophobia. Interior Minister Gerald Darmanin has already announced the dissolution of the humanitarian association BarakaCity,* while the Pantin Mosque has been closed. Not to mention the expansion of the criminalization of minors for “apologizing for terrorism, complicity and death threats.”

To a lesser extent, left-wing organizations and activists have been targeted: tags “collabos” on the headquarters of the French Communist Party, violent media campaigns against deputies of the party “France  Insoumise” as well as against committed journalists, death threats against political and trade union activists Etc.

The French government’s responsibility for this explosion of racist violence and hatred is indisputable. Gérald Darmanin, for example, did not hesitate to establish a continuity between “halal rays” and “separatism,” while the Minister of National Education, Jean-Michel Blanquer, declared that “Islamo-leftism” has gangrened the university, like the ranks of France Insoumise, and was wreaking “havoc.” Blanquer ended up asserting that “these people promote an ideology that then, from afar, it leads to the worst.” The message is clear: these organizations and personalities are accused of complicity in the attacks committed in recent weeks.

The policies of the French government legitimize and trivialize the discourses and theses of far-right organizations. It thus encourages violence through targeting Muslim populations and symbols.

Islamophobia is not a new phenomenon in France, far from it, since it has its source in its colonial and historical imperialist policies. However, Islamophobia has intensified in Western countries since the September 11 attacks by Al Qaeda.

This latest Islamophobic offensive is taking place at a time when the Macron government is facing a number of political challenges and difficulties: against a background of the health crisis and social discontent since the yellow vest movement. It is interesting to note that Macron had not initially made Islamophobia a strong orientation of his presidency. During his campaign, he presented himself as a young cosmopolitan opponent of Marine Le Pen’s far right, criticized former Prime Minister Manuel Valls’ obsession with Islam and called colonialism a “crime against humanity.”

Islamophobia has a dual purpose for the French ruling classes, which allows it both to divide workers — making their struggles for social rights more difficult — and promotes the gathering of the white majority around a so-called “French Republic” without class. This mythical “Republic” is described as the best protector and defender of the right to freedom of expression, women’s rights, public order, “secularism,” etc.

In this context, it is essential for the French government to break all popular and anti-racist initiatives as it deepens its neoliberal and austerity policies. One example is the work of undermining the large demonstration of 10 November 2019 against Islamophobia and racism.

While denouncing the authoritarian and racist offensive of the French government, we must also oppose the jihadist and Islamic fundamentalist movements. From this perspective, it should be remembered that religious fundamentalism is an international phenomenon, which is not unique to the Middle East or to predominantly Muslim societies. Similarly, a clear distinction must be made between the Islamic religion and fundamentalist groups.

Islamic fundamentalism is the product of the specific political and economic conditions and developments in the Middle East, where imperialist powers have had an essential and continuous impact on states and the political economy.

The United States used its strategic partnerships with Iran (until the overthrow of the Shah in 1979), Israel and Saudi Arabia to dominate the region. They supported them to deal with Arab nationalist regimes like Nasser’s Egypt, communist and leftist movements, and various popular struggles that generally claimed greater sovereignty, more social justice and independence from imperial domination. In this context, Saudi Arabia has promoted and financed various Sunni Islamic fundamentalist movements, in particular the Muslim Brotherhood, to counter nationalists and the left.

The crisis of Arab nationalist regimes has opened up the political space for the development of fundamentalist movements. These regimes abandoned their previous radical and anti-imperialist social policies for two reasons. First, they suffered a crushing defeat by Israel in 1967. Then their methods of developing state capitalism began to stagnate. As a result, they opted for a rapprochement with Western countries and their Gulf allies. They adopted neoliberalism, putting an end to many social reforms that had earned them popularity among the working and peasant sectors. The regimes also backfired on the Palestinian national movement in seeking compromises with Israel. At the same time, all Arab nationalist regimes and others, such as Tunisia, voluntarily supported Islamic fundamentalist movements at one time or allowed their development against leftist and nationalist groups.

The overthrow of the Shah’s regime during the Iranian revolution and the establishment of the Islamic Republic of Iran in 1979 stimulated Shiite Islamic fundamentalist movements in the region.

Also in 1979, to combat the invasion of the Soviet Union in Afghanistan, the United States, with the help of its allies in the region, injected billions of dollars into the training and arming of fundamentalist groups. U.S. imperialism thus contributed greatly to the creation of the Al Qaeda movement, the most extremist wing of Islamic fundamentalism at the time, which would later turn against Washington.

The last significant development that fueled the rise of fundamentalism was the growing political rivalry between Saudi Arabia and Iran. Each state has used its own denominational fundamentalism to achieve its counter-revolutionary goals.

Organizations such as the so-called Islamic State (IS), Al Qaeda, the various branches of the Muslim Brotherhood and Hezbollah differ in their formation, development, composition and strategy. Gradualists such as the Muslim Brotherhood and Hezbollah in Lebanon participate in elections and existing state institutions. On the other hand, jihadists such as Al Qaeda and IS view these institutions as un-Islamic and instead turn to guerrilla or terrorist tactics in the hope of a possible seizure of the state. Among the jihadists, there are also debates and divisions over tactics and strategies to achieve their goal of an Islamic state. In various historical contexts and periods, the various fundamentalist currents have sometimes collaborated and at other times have been in competition and even clashed.

Nevertheless, they defend a common political project, despite significant differences. All variants of Islamic fundamentalism share the goal of establishing “a Sharia-based Islamic state” that preserves the existing capitalist order. Islamic fundamentalist movements, such as Hezbollah and the Muslim Brotherhood in Egypt, have promoted neoliberal policies by supporting measures such as privatization, market liberalization and openness to foreign capital, while denouncing and attacking social movements below, particularly trade union movements.

Therefore, the task of the left is to fight unambiguously the capitalist system and the oppressions that constitute it. In this way it will be possible to fight politically and cut the grass under the feet of ultra-reactionary forces and reveal them as insignificant. We must work to unify the working classes in all their diversity.

*On December 22, 2020, a local court cancelled the appointment of the legal representative responsible for the liquidation of Barakacity’s bank account and assets, following its forced dissolution by the State on October 28, 2020. This represents a temporary victory for the association.

This article was first published in solidarités, December 11, 2020 in French.