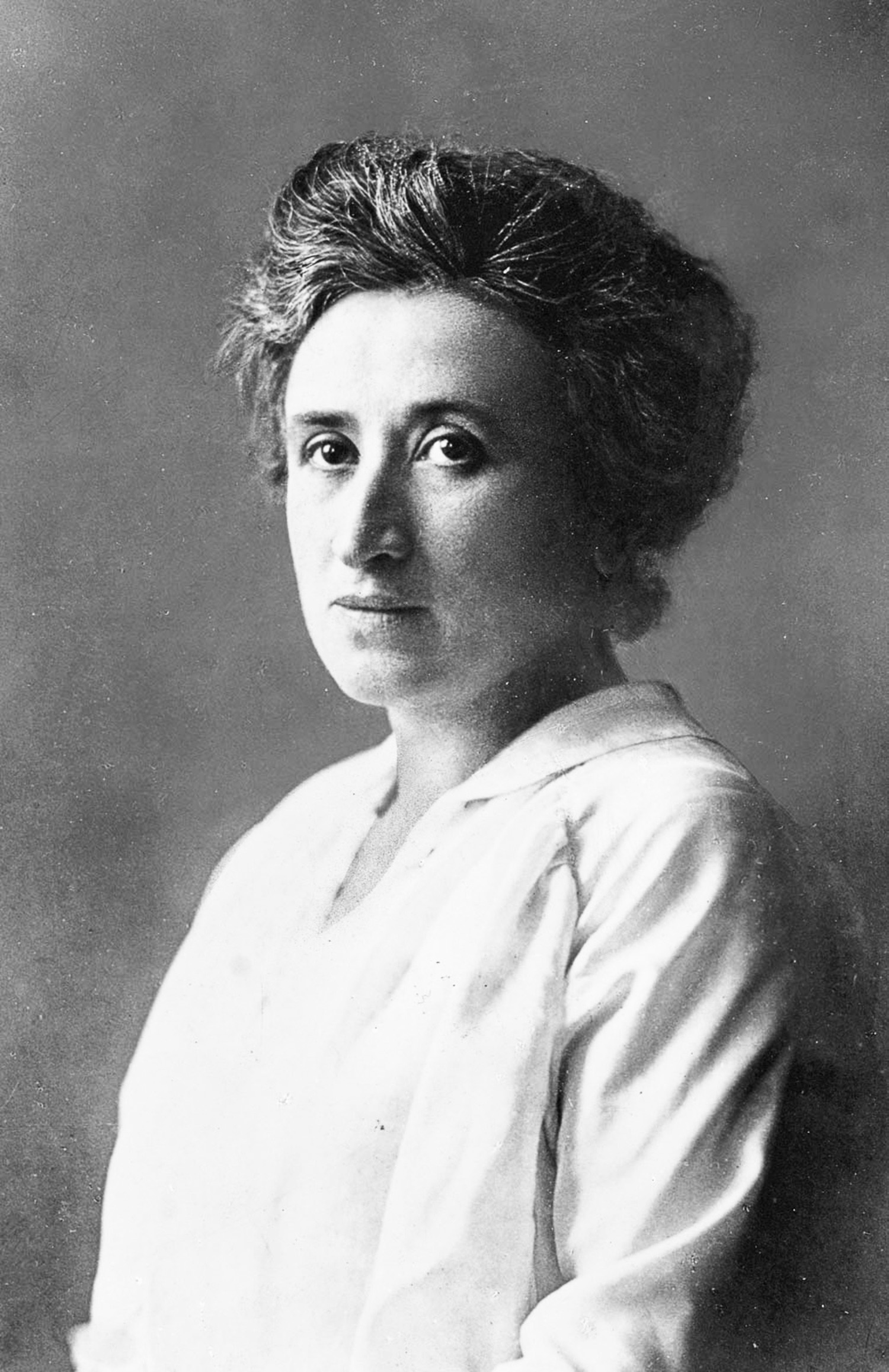 MARCH 5, 2021 IS THE 150th anniversary of the revolutionary Rosa Luxemburg. Michael Löwy analyzes her relevance for today.

IF WE SHOULD choose the distinctive feature of Rosa Luxemburg’s life and thought, it is perhaps revolutionary humanism. Whether in her criticism of capitalism as an inhumane system, in its struggle against militarism, colonialism, imperialism, or in her vision of an emancipated society, her utopia of a world without exploitation, without alienation and without borders, her socialist humanism runs like a red thread all her political writings. This humanism is also in her correspondence, its especially in her letters from prison. These have been read and re-read by successive generations of young activists.

Why does this figure of a woman — Jewish and Polish, Marxist and revolutionary, tender and uncompromising, militant and intellectual — always challenge us? How is it that 100 years after her death she stays so close to us? What is the astonishing topicality of her thinking for those of us living in the 21st century?

I see at least three reasons:

First of all, in an era of capitalist globalization – its neo-liberal globalization, global domination of great financial capital, the internationalization of the economy in the service of profit, speculation and accumulation — the need for an international response, a globalization of resistance, is more than ever on the agenda. Few figures of the workers’ movement have embodied, as radically as Rosa Luxemburg, the internationalist idea, the categorical imperative of unity, association, cooperation, fraternity of the exploited and oppressed of all countries and continents. As we know, along with Karl Liebkencht, she was one of the few leaders of German socialism to oppose the vote on war appropriations in 1914. The German imperial authorities — with the support of the social-democratic right — made her pay dearly for her internationalist opposition to the war by locking her behind bars for most of the conflict.

Faced with the dramatic failure of the Second International, she dreamt of the creation of a new global association of workers. Only her assassination in January 1919 by the Freikorps troops introduced in Berlin by the Social Democratic Minister Noske to crush the revolt of the Spartakus League prevented her from participating, together with Lenin and Trotsky, in the founding of the Communist International in 1919.

Few, like her, understood the mortal danger to workers of nationalism, chauvinism, racism, xenophobia, militarism and colonial or imperial expansionism. One can criticize this or that aspect of her reflection on the national question, but one cannot question the prophetic force of her warnings.  I label her a “prophet” in the original biblical sense (so well defined by Daniel Bensaïd in his recent writings): not one who claims to “predict the future,” but the one who states a conditional anticipation, who warns people of the disasters that will occur if we do not take another path.

Second, one can only admire a revolutionary thought like that of Rosa Luxemburg, who was able to reject the convenient and conformist ideology of linear progress, the optimistic fatalism and the passive evolution of social democracy. Walter Benjamin speaks of this dangerous illusion in his “Thesis” of 1940 — that it was enough to “swim with the current,” to let the “objective conditions” play out.

In writing, in her 1915 pamphlet “The Crisis of Social Democracy” (signed using the pseudonym “Junius”), she wrote that the choice was “socialism or barbarism.” Rosa Luxemburg broke with the conception — of bourgeois origin, but adopted by the Second International — of history as irresistible progress, as inevitable, as “guaranteed” by the “objective” laws of economic development or social evolution. Gyorgy Valentinovich Plekhanov summed up this position when he wrote: “The victory of our program is as inevitable as the birth of the sun tomorrow.” The political conclusion of this “progressive” ideology could only be passivity: no one would have the crazy idea of fighting and risking one’s life to ensure the appearance of the sun in the morning.

The political and “philosophical” scope of the slogan “socialism or barbarism” is suggested in some texts of Marx or Engels, but it is Rosa Luxemburg who makes this explicit. The two roads implies a perception of history as an open process, as a series of “bifurcations,” where the “subjective factor” — consciousness, organization, initiative — of the oppressed becomes decisive. It is no longer a question of waiting for the fruit to “ripen,” according to “natural laws” of history or the economy, but of acting before it is too late.

The other alternative leads to sinister peril: barbarism. By this term, Rosa Luxemburg does not mean an impossible “regression” to a tribal, primitive or “wild” past. In her eyes it is a modern barbarism, exemplified by the First World War. This murderous inhumanity surpassed the warlike practices of the “barbarian” conquerors at the end of the Roman Empire. Never had such modern technologies — tanks, gas, military aviation — been placed in the service of an imperialist policy that produced massacre and aggression on such a vast scale.

From the point of view of the history of the 20th century, Rosa Luxemburg’s motto was also prophetic: the defeat of socialism in Germany paved the way for the victory of Hitler’s fascism and, subsequently, the Second World War. These monster forms of modern barbarism are summarized by one word: “Auschwitz. “

The warning of Rosa Luxemburg’s slogan continues to be on the agenda in our time. The long period of recession of the revolutionary forces — from which we are gradually beginning to emerge — has been accompanied by the increase in wars and massacres of “ethnic cleansing,” from the Balkans to Africa, by the rise of racism, chauvinism, fundamentalism of all kinds, including in the heart of “civilized” Europe.

But there is a new danger, not foreseen by Rosa Luxemburg. Ernest Mandel pointed out in his last writings that the choice in the 21st century is no longer “socialism or barbarism,” but “socialism or death.” His reference is to the risk of ecological catastrophe resulting from global capitalist expansion. If socialism does not interrupt this dizzying race to the abyss — of which the rise in the planet’s temperature and extreme weather conditions are the most visible signs — it is the very survival of the human species that is threatened.

Third, in the face of the historical failure of the dominant currents of the labour movement — the unglamorous collapse of the so-called “real socialism” (heir to sixty years of Stalinism) or the passive submission (perhaps active adherence?) of social democracy — to the neo-liberal rules of the global capitalist game, the alternative that Rosa Luxemburg represented an alternative. It is a socialism that is genuinely revolutionary and radically democratic. It appears more relevant than ever.

As an activist in the workers’ movement of the Tsarist Empire — she had founded the Social Democratic Party of Poland and Lithuania, affiliated with the Russian Social Democratic Workers’ Party — she had criticized the too authoritarian and centralist tendencies she saw in Lenin’s Our Political Tasks (1904). At the same time, as leader of the left wing of German social democracy, she was fighting against the tendency of the party’s trade union and parliamentary representatives to monopolize political decisions.

The Russian general strike of 1905 seemed to her an example for Germany as well: it trusted the initiative of the workers more than the wise decisions of the governing bodies of the German labor movement.

Still imprisoned during the events of October 1917, Luxemburg immediately solidarized with the Russian revolutionaries. In a pamphlet on the Russian Revolution written in 1918, but not published until after her death (in 1921), she enthusiastically praised this great emancipatory act, and paid a warm tribute to the revolutionary leaders of October:

“All the courage, the energy, the revolutionary insight, the logic that a revolutionary party can prove in a historical moment was the work of Lenin, Trotsky and their friends. All the honor and the whole faculty of revolutionary action that is lacking in Western social democracy, ended up among the Bolsheviks.  The October uprising will not only have served to effectively save the Russian revolution, but also the honour of international socialism.”

This solidarity did not prevent her from criticizing what she thought dangerous in their policy. While some of her criticisms — on national self-determination or land distribution — are questionable and rather unrealistic, others, which touch on the question of democracy, are of remarkable relevance.

Crediting the Bolsheviks of creating, while in the dramatic circumstances of civil war and foreign intervention, “as if by magic, the most beautiful of democracies,” Rosa Luxemburg draws no less attention to the danger of a certain authoritarian shift. She re-affirms some fundamental principles of revolutionary democracy:

“Freedom for the only supporters of the government, for the only members of a party — however many — is not freedom. Freedom is always at least the freedom of the one who thinks differently. (…) Without general elections, without limited freedom of press and meeting, without a free struggle for opinion, life fades in all public institutions, vegetates, and bureaucracy remains the only active element.”

It is difficult not to recognize the prophetic significance of this warning. A few years later the bureaucracy seized all power, sidelining the revolutionaries of October 1917 — waiting, in the 1930s, to ruthlessly exterminate them.

A real re-foundation of communism in the 21st century needs to be able to proclaim the economy of the revolutionary, Marxist, democratic, socialist and libertarian message of Rosa Luxemburg.