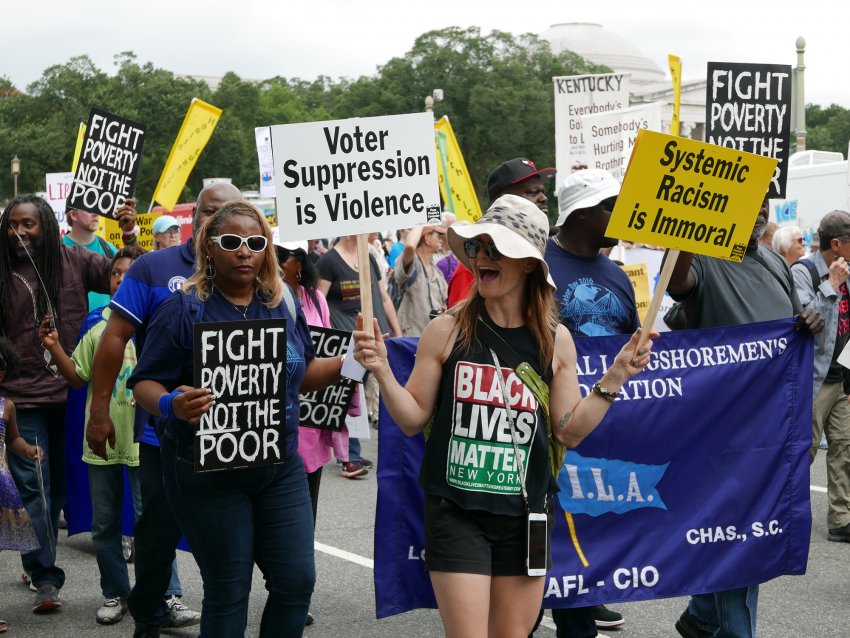 THE RIGHT-WING CULTURAL war in the United States is not an academic debate about race, history and freedom. It is a life and death struggle for Blacks, Latinos, Asians, indigenous peoples and transgender youth, and for women’s right to abortion and jobs.

The Republican Party has turned to a cult figure, former President Donald Trump, to justify their nationwide drive to undermine democracy and turn the country into a white-dominated power, with minorities at best as second-class citizens.

The origins of this battle began before the COVID-19 pandemic. The pro-Trump forces are using the fears to advance totalitarian elements of capitalism.

Trump says he remains president. His loyal, knee-bending supporters refuse to say the 2020 election was fair and democratic. The cult of personality is so strong that conservative Congressperson Liz Cheney was dumped from her leadership position for voting — along with nine other Republicans — to impeach Trump.

This is the new world of far-right Republicans. There is no attempt to debate ideas. It is Trump all the way. Conservatives who oppose the cult of personality are driven out of the party.

Yet, Trump never received more than 50% of voters’ support. Today his favourability rating is below 40%, but stands at 80% among Republican voters.

The push to restrict voting rights is code for attacking the movement for Black equality.

The attack is an orchestrated, nationwide voter-suppression campaign. It is aimed at Black and Brown minorities and Democratic Party supporters.

From Florida to Georgia, Iowa and now Texas, Republican lawmakers have used unsubstantiated claims by Trump and his allies to justify new voting restrictions. They argue the new limits, which largely target postal voting, are needed to boost public confidence and improve security. In some cases, the rules also create onerous requirements and penalties for local election officials.

“It is old Jim Crow dressed up in what our colleagues are calling election integrity,” said Democratic state Representative Jessica Gonzalez.

Meanwhile, in Arizona, a “recount” of votes from the November 2020 election continues. The New York Times reported: “Untrained citizens are trying to find traces of bamboo on last year’s ballots, seemingly trying to prove a conspiracy theory that the election was tainted by fake votes from Asia. Thousands of ballots are left unattended and unsecured. People with open partisan bias, including a man who was photographed on the Capitol steps during the January 6 riot, are doing the recounting.”

While the recount has no official standing and will not change the state’s vote, whatever it finds, it may lead Republicans in other states such as Michigan to order similar phony recounts.

Texas’ House of Representatives adopted voting restrictions based on the state constitution’s “racial purity clause” on May 7. The clause allowed Texas to justify all-white elections for decades, until the introduction of the federal Voting Rights Act of 1965.

The new provisions include lowering initially proposed enhanced criminal penalties and allowing poll watchers to be removed if they breach the peace. They also clarify that election judges and volunteers will not be held liable for “honest mistakes.”

The state will now be instructed to send voter registration applications to high schools and to develop an online format for tracking early ballots. Other restrictions would outlaw Texas county officials from sending postal ballot request forms to all registered voters — something voting officials in Harris County put in place last year because of the COVID-19 pandemic. Harris County, which includes Houston, is also a Democratic stronghold, where 44% of the nearly five million residents are Latino and 20% are Black.

Voting rights groups say poor and minority voters will bear the brunt of restrictions, and that Republicans are counting on the privilege of their voters to overcome hurdles. Republican voters, particularly seniors, have long embraced postal voting.

The state Senate, which is controlled by the Republicans, must approve the bill. State governor Greg Abbott has said he will sign it.

In Florida, Republican governor Ron DeSantis signed a new voting law as restrictive as the one in Georgia on May 6. Trump won Florida under the current law in the previous election. DeSantis held a closed signing, in front of an all-white, male audience and Fox News reporters. No other media was present.

Florida’s new law restricts when and how many ballot drop boxes can be used and who can drop off ballots. It mandates that drop boxes must be guarded and available only when electoral offices and early voting sites are open.

To protect against what Republicans call “ballot harvesting,” a person can only collect and drop off the ballots of their immediate family, and no more than two ballots from unrelated people.

It also redefines legal protests. The police can declare three people standing together as a “riot” and arrest them on felony charges. The top cops were also at the governor’s signing.

Tim Scott is the only African American Republican Senator. He firmly believes the country is not racist. He has faced racism as a Black man living in South Carolina. Yet he argues for and defends the Republican Party’s “big lie” about racism.

Scott told “Face the Nation” host John Dickerson: “I’ve been saying for a long time: America is not a racist country.

“Is there a lingering effect after a couple of centuries of racism and discrimination in this nation? The answer is absolutely.

“The question we should be debating and fighting over is how we resolve those issues going forward. One side says, ‘I’m going to take from some to give to others.’ Fighting bigotry with bigotry is hypocrisy, it just doesn’t work.

“One of the reasons why we have fought for and won the highest level of funding for historically black colleges — Republicans believing in that fight — is because I understand that if I can level the playing field in education, we will actually see human flourishing like we’ve never seen before.”

Scott, like most conservatives, falsely believes the issue is about lingering present day acts of discrimination and not historical racism, ignoring the structural racism U.S. capitalism is built upon.

It is not about taking from whites to give to Blacks as reparations. It is about making Blacks equal to whites in wealth, opportunities and in every sense, to end institutional racism. It requires affirmative action by the state to “level the playing field.” It also requires a redistribution of land and wealth from the billionaires.

The right’s cultural war includes rejecting any attempt to tell the full story about the country’s founding.

In 1619, the first African slaves were brought to the English colonies. Slavery became the foundation of capitalism and white supremacy its ideology.

In 1776, white descendants from England and Scotland demanded independence. The founders did not believe slaves would ever be citizens.

Indigenous peoples were regarded as “savages” and not part of the new country. Genocide was committed. The Indigenous survivors did not get citizenship until the 1920s.

There has never been an apology for slavery. Those who challenge the white settler version of history are called “un-American.”

The conservatives’ “cultural wars” aim to convince whites that they will lose out if the complete history of Native peoples, former slaves and immigrants from Asia and Latin America is told.

Many top Democrats including President Joe Biden and Vice President Kamala Harris say the country is not racist, but is flawed by racist institutions. This is a concession that undermines the popular movement to abolish policing and replace it with a new safety force drawn from the communities that are under siege.

It is up to whites to explain to other whites why 1619 is important and why history must be inclusive and honest and discuss more than the history of white settlement and privileges.

The George Floyd case and its aftermath is significant. Since former police officer Derek Chauvin’s conviction for Floyd’s murder, the Department of Justice (DOJ) has filed a civil rights case against Chauvin and three other cops.

While Scott and the Republicans reject the idea that policing is racist, until that is recognised, their proposals to reform policing will not save Black lives.

Unless “qualified immunity” for police is eliminated, any change will have limited meaning.

Changes to police techniques, such as limiting chokeholds and no-knock warrants, without holding individual cops liable, solves little. The police “unions” have the power to undermine modest reforms.

The key demand is to abolish and replace policing as it exists.

Racist policing is the proof that this is a racist country. The failure to end policing as it is practiced shows how racist institutions are disadvantaging Blacks and other minorities.

Most local leaders of the BLM movement don’t expect much from Biden or Congress. They will continue protests against police killings until fundamental changes are made, beginning with an end to qualified immunity.

(Updated to reflect Republican action to remove Liz Cheney as Republican leader in the U.S. House of Representatives)