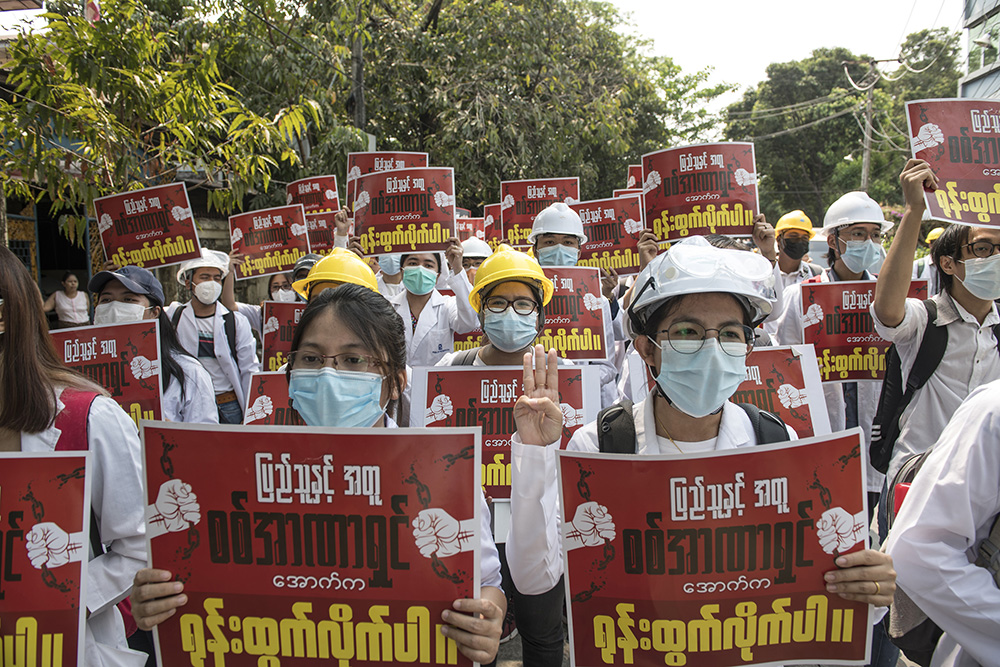 MYANMAR SAW ANOTHER another record-breaking day of protest-related deaths on Sunday as more than 39 anti-regime protesters were killed across the country by security forces, pushing the total death toll since the coup was launched last month to 134.

The last time the Southeast Asian country experienced its bloodiest day was March 3, when 28 people slain by soldiers and police across the country while taking to the streets for their anti-junta activism.

During the crackdowns, 18 protestors were shot dead and several others were wounded, a doctor who cared for the injured at a township hospital said on her Facebook page Sunday evening. She said that one out of two protesters who were shot in the head is in critical condition.

The death toll is expected to climb higher as some were seriously wounded during the police shooting.

In South Dagon Township in eastern Yangon, three civilians, including a 15-year-old girl, died after being shot in the head and abdomen. According to one of the protesters, police and soldiers began shooting at demonstrators at 6 p.m. and continued to 11 p.m. She said 15 people had been critically wounded. In all, about 50 were wounded in South Dagon.

Anti-regime protesters carry a man who was wounded during a police shooting at Yangon’s Hlaing Tharyar Township on Sunday.

Security forces also cracked down on an anti-regime protest by the students at Bago on Sunday morning. During the crackdown a young boy was shot dead, while three more people were injured.

In Hpakan, the jade-mining hub in Kahcin State, a 30-year-old man was shot dead and six others were wounded when Myanmar’s security forces fired live rounds at anti-regime protesters on Sunday morning.

One woman was shot dead and six other people were wounded in Myanmar’s second biggest city Mandalay when police and soldiers opened fire on anti-regime protesters Sunday afternoon.

On Sunday, Yangon saw the most severe level of crackdown yet. Apart from the 18 killed in Hlaing Tha Yar, 17 other protesters were reportedly killed during police attacks against anti-regime protests in several of Yangon’s townships including Shwepyithar, North Oakkalapa, South Dagon, Insein, Hlaing, Thingyangyun and North Dagon.

“These shooting are totally unacceptable. They are not dispersing the protests. They are just murdering the people with violence,” a protester who took part in the anti-regime demonstration in Yangon’s Hlaingtharyar Township where several protesters were killed, told The Irrawaddy.

In Yangon’s Tamwe Township, a junior medical student was shot down by security forces from the township police station. Video records showed policemen dragging away the young man’s wounded body lying in the pool of blood, while kicking and beating a woman who was trying to save the student. She was taken away by the police. As of Sunday evening, he was still in critical condition, according to close friends.

Anti-regime protests have erupted across Myanmar for more than a month following a coup Feb. 1. Since mid-February, the junta has been intensifying bloody crackdowns against the protesters across the country while claiming that “minimum use of force” was applied for crowd control.