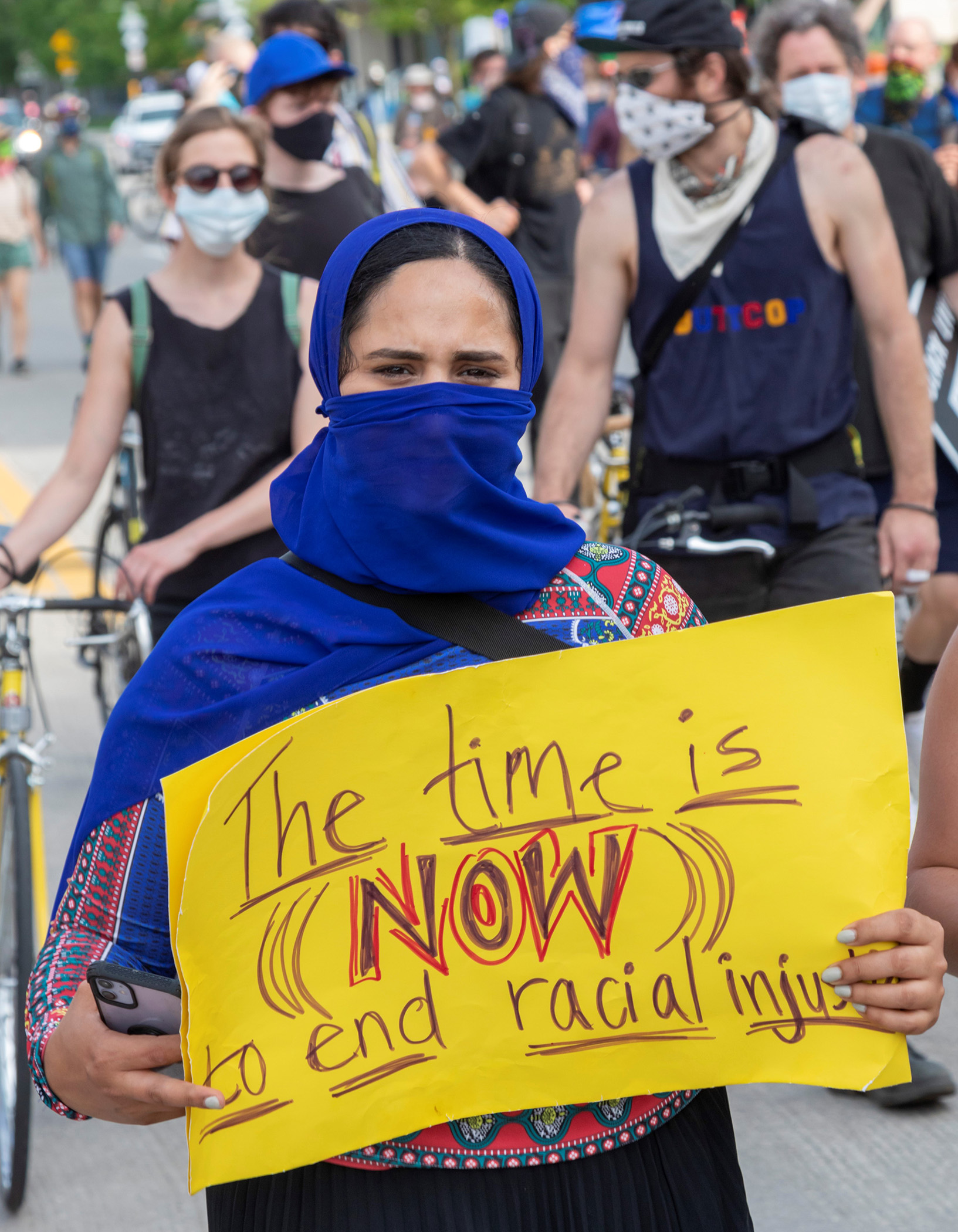 The struggle for freedom, justice and equality continues. www.jimwestphoto.com

WHAT DOES THE Michigan “Wolverine Watchmen” militia kidnapping-terrorist plot mean for the presidential election?

As president Donald Trump has thrown his support to white nationalists and supremacists, with his anti-Black racism and anti-democratic views on display every day, he clearly sees the extremists as an important part of his base.

Meanwhile, even after contracting COVID-19 in early October (although it is not clear exactly when or how), Trump spreads misinformation about the disease and pretends it is no big deal. He tweeted, “Don’t be afraid of COVID” and don’t let it “dominate” your life. Meanwhile, more than 216,000 Americans have died — the highest number of COVID-19 deaths in a single country.

On October 8, the FBI, Michigan State police and Michigan Attorney General Dana Nessel announced the arrest of 13 white supremacists for allegedly planning to kidnap and possibly murder Michigan governor Gretchen Whitmer, who has called Trump out repeatedly. Six face federal charges for conspiracy to kidnap the governor. The other seven are charged with domestic terrorism under state law.

“According to an FBI affidavit,” said the Detroit Free Press, “individuals connected with a militia group purchased items, including a Taser and night goggles, conducted surveillance at Whitmer’s cottage, and discussed blowing up a bridge to divert police, kidnapping Whitmer, and taking her to Wisconsin to face a ‘trial’ for treason.”

Whitmer had known about the kidnapping plot for several weeks and had received many online threats against her. The seven men arrested under state law are allegedly members of the “Wolverine Watchmen” — a Michigan-based militia that has been recruiting members on Facebook since November to prepare for a so-called “boogaloo” — a violent uprising against the government or civil war.

Michigan has a long history of white supremacist organizations and violence. Although private armed militias are not protected under the United States Constitution, they have been free to flourish across the country. Many militia members have ties to the police, who look the other way.

In Kenosha, Wisconsin, when the armed teenage thug Kyle Rittenhouse, travelled from Illinois and murdered two protesters, Trump hailed him as acting in “self-defense.”

The conspiracy plot to kidnap Whitmer was not a surprise. The Southern Poverty Law Center estimates there are 175 white supremacist groups across the country. Those groups, not Blacks or Muslims, are the violent threats. The FBI director agrees. But Trump’s Attorney General William Barr continues to deny any knowledge of threats against elected officials.

What then should the Michigan plot mean for progressive activists in the presidential election? Should the left fall behind the Biden-Harris presidential ticket to stop Trump? Will voting out Trump end “Trumpism”?

Anti-Trump forces see the Michigan plot as more reason to mobilize votes for Joe Biden. Liberals urge those in the streets in the Black Lives uprising as well as union fighters and defenders of women and gay rights to do the same.

This is no surprise. The Democratic Party establishment has moved to stop the Green Party from getting on state ballots in Pennsylvania and Wisconsin, among others. This is the Democrats’ own version of voter suppression, sending a clear message to “never Trump” Republicans that Biden is no socialist or radical.

The liberal strategy is to vote for Biden as “the greater good.” Trump is a far rightist, but regarding policy – if not norms of behavior — is within Republican Party orthodoxy. So the party is OK with Trump using the institutions of the state to protect and expand his financial empire. Those loyal to him do so for their own financial interest or political objectives.

Trump targets immigrants, Blacks (always the case) and other people of color. Working-class whites? the real “victims” in Trump’s rhetoric? have always been highly influenced by anti-Black racism, to avoid being treated as inferior.

On the left, support for Biden includes some who believe he is a “greater good” candidate. But most who understand that systemic racism is rooted in capitalism support Biden as a “lesser evil” way to roll back Trump’s attacks on “democracy.”

Trump is so bad that some call him a “neo fascist” and contend that the socialist left, therefore, must be with the anti-Trump forces, even if it means electing a capitalist politician who will continue to support the police and the state against them.

The error is to join with the liberals who are out organizing against Trump by mobilizing the vote for the Democrats. Lesser evilism has never brought significant change or fundamental change.

There is no mass socialist party or political movement in the United States right now. The most significant mass uprising is the anti-cop Black-led movement. While most of these militants will vote for Biden rather than third-party candidates in their states, they recognize that whoever wins will not change the police violence and murder of unarmed Black men and women.

Police terror was a prominent feature during the Barack Obama-Biden presidency. While Obama showed empathy to the Black victims, he proposed no serious changes to the criminal legal system.

The leaders of the Black Lives Matter (BLM) movement take a long-term view of the struggle, which includes voting rights. To that end they are organizing a two-day live-streamed event on October 17-18, titled “The Freedom Side: The People’s Tribunal and Congress.” The theme of the event is: “Rising against white supremacist terror, toward a just world.”

“In the tradition of international tribunals against state terror, we the people will hold corrupt government officials, greedy corporations, and actors of white supremacist and patriarchal violence accountable for the terror our communities face.

“The Tribunal will lay the crimes of US policy and the policies and practices of dominant institutions that perpetuate white supremacy, state terror, racial capitalism, empire and hetero patriarchy.

“The biggest uprising in US history has focused on police violence and racism, but the demands of the movement reflect a bigger agenda and a deeper analysis. This tribunal will document in human terms, the pain and suffering caused by current policies and practices.”

The event will feature “Freedom Side Jurors” including Angela Davis, Alfred Woodfox, Raquel Willis, Tom Goldtooth and Arundhati Roy, and will receive testimonies from communities across the country on the first day.

The second day will be the “People’s Congress.”

“We are a resilient community. Despite the conditions we face, we continue to envision a just world where we live with dignity and integrity.”

The People’s Congress will also outline a strategic plan beyond November: “We will be building our collective vision that goes beyond the elections and building our skills to take sustained action towards liberation.”

It won’t be possible to defeat Trumpism and the unfair criminal justice system by electing liberal officials and maintaining a legal system that justifies the police killing of Black people.

The strategy must include counter-mobilizations against these reactionary forces. When armed militias occupied the Michigan State Capitol building, the response was denunciations, legislation and legal briefs. Black legislators and others were afraid to walk to their offices. The police did nothing.

Since the arrests over the plot to kidnap the state’s governor, the Republicans are downplaying its significance. They also oppose a ban on bringing firearms into the building.

Liberals like Whitmer have expressed concern about the street protests against the police and she rejects using public demonstrations to fight back. But imagine if mobilizations? like the BLM peaceful protests ? had countered the armed, white demonstrations against Whitmer’s actions to protect citizens from COVID-19?

Malcolm X once explained the difference between white conservatives and liberals. “Beware of both,” he said.

“The white conservatives aren’t friends of the Negro either, but they at least don’t try to hide it. They are like wolves; they show their teeth in a snarl that keeps the Negro always aware of where he stands with them.

“One is a wolf, the other is a fox. No matter what, they’ll both eat you.”

The voting base of Franklin Roosevelt in the 1930s included whites in the segregated anti-Black South. In the 1960s, Democrats and Republicans pressured the civil rights leaders to “slow down” on the movement’s demands. Martin Luther King and the militant left wing said, “No.”

Finally, Democratic President Lyndon Johnson decided that the new Black voters could replace the racist whites in the South. Yet the new more inclusive Democratic Party joined with the Republicans (now aligned with former segregationist Democrats in the South) to oppose moves to effectively desegregate public schools in practice, not just words. This included then-Senator Biden.

Affirmative action programs first set up by Johnson were opposed later by Democrats and Republicans.

The bottom line is that mass struggle brought about changes, including the integration of the military in the 1940s and the civil rights laws in the 1960s.

The task for revolutionary socialists, who are small in number, is to present a clear anti-capitalist perspective. The independent socialist strategy is straightforward: counter-mobilize against the right and join with the people in the struggles for Black lives, labour rights, women’s rights and gay rights, and present an electoral platform which points to a socialist future.

Young people are being politicized and radicalized by the protests and educated by debates between anti-Trump and pro-Trump forces. Police clashes with peaceful marchers, and the emergence of armed militias like those in Michigan, show the future could be more chaotic and violent. Advancing revolutionary socialist vision and leadership is all the more important in this environment.