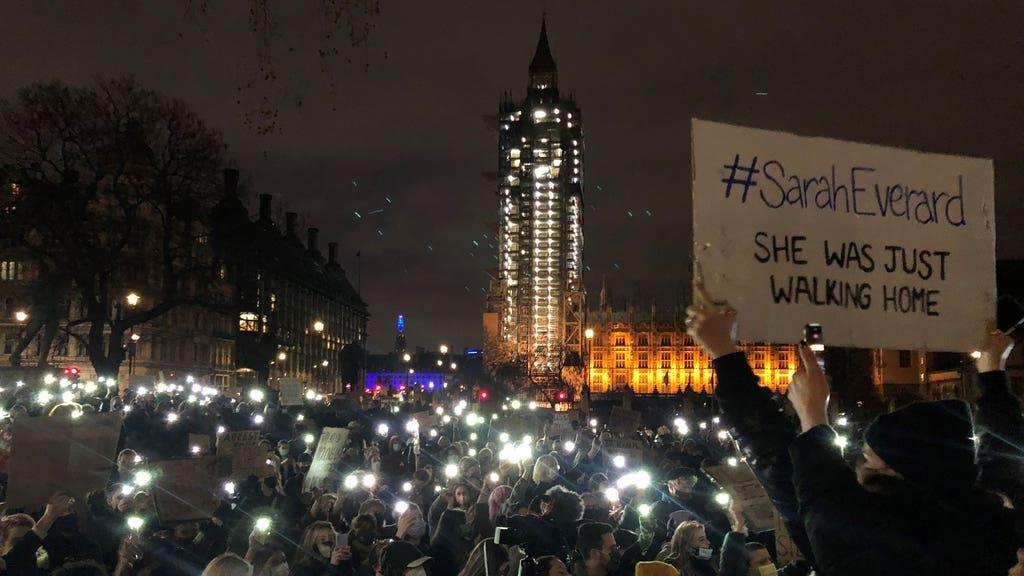 After Sarah Everard’s murder, demonstration demanded an end to the violence against women. PA Wire

AFTER THE CALL went out last Saturday to vigil in of honor Sarah Everard, who had been murdered walking home, the gathering was declared unlawful because of COVID-19 restrictions. When thousands came masked anyway, the police “protected” the crowd by attacking it and brutally arresting women. Cressida Dick, head of the Metropolitan Police, explained “Unlawful gatherings are unlawful gatherings. Officers have to take action if people are putting themselves massively at risk.” While willing to have the police action reviewed, she defended the police and said she would not resign.

Prime Minister Boris Johnson told reporters he had confidence in Officer Dick and spoke in support of the new policing bill that is discussed in Parliament this week. The bill would grant more powers to the police to control protests. The fact that a policeman has been charged with killing Everard didn’t cause bill authors to rethink their strategy. Protesters marched to Parliament, shutting down nearby Westminister Bridge, before going to Scotland Yard, where a line of police stood behind barricades.

THEY COULD HAVE stayed away. If the police had done that, it would have been a quiet, dignified, open-air vigil for a murdered woman, allegedly killed by a policeman. It would have been a time to grieve and remember not only Sarah Everard but the many, many more women who die as a result of male violence – and the even greater numbers whose lives are destroyed by physical violence and by coercive control.

Across the globe, especially in Latin America, violence against women has been the catalyst over the last few years for a new birth of feminist protests. Ni una menos (not one more) has also been echoed in many other parts of the world.

Yesterday thousands of women and some men came to Clapham to pay tribute to Sarah and to reflect.

The police could have remained in the background. If they had done that, the gathering would have taken its course, then slowly dispersed in the cold and darkness of a March evening. But they didn’t.

Clapham Common, especially near the tube station, is packed with people around 6 o’clock. Early on, from a distance, it was hard to tell the vigil from the general crowd in the park. Only later, as numbers built up, reaching several thousand, was it obviously a political protest. But it was an open-air protest, everyone was wearing masks, and people were taking the trouble to keep their distance.

The bandstand was surrounded by flowers. People had been coming all day to lay them and continued to do so as the vigil gathered. For a long time, it was very quiet, except for the rhythmic beating of an Afro-Caribbean drum.

Then there were some speeches from the bandstand and some chanting, but most couldn’t hear because there was no sound system. Sisters Uncut had stepped in to lead the vigil when the original #ReclaimTheseStreets organisers had called off this and other events because the police had refused to engage as they easily could have done to authorise a covid safe event. The irony that the trigger for the vigil in the first place was the kidnap and murder of a woman (allegedly) by a police officer seems to be completely lost on them – and they hope in vain that the rest of us somehow missed this important point.

Sisters Uncut were right to call for people to go to Clapham. Collective action is needed – strength from coming together not just being isolated at home – especially for those for whom this is absolutely not a place of safety. So too were women in Nottingham who made it clear their protest would continue and those in many other places who turned out.

The police attack on the vigil in Clapham started around 6.30 after the Duchess of Cambridge had her photo op and after the dark had fallen. Let us be clear about what happened. Police first barged their way through the crowd onto the bandstand to stop the speeches and start making arrests. When the crowd hemmed them in and tried to prevent people from being taken away, they sent in more cops. And when there were scuffles, they started using snatch-squads to carry out arrests.

By the end, in addition to dozens of regular police vans, they had blue Tactical Support Group vans on the scene. The police started the confrontation, escalated the confrontation, and eventually deployed hundreds of cops to attack a women’s vigil for a woman (allegedly) murdered by one of their own.

The purpose was clear. They wanted a handful of arrestees for a show trial. The aim will be heavy fines, perhaps even prison sentences, as a way of intimating women, intimidating everyone, into complying with state bans and giving up their right to protest; as a way of crippling radical movements by threatening to take out leading activists.

The entire movement should now get behind Sisters Uncut in demanding that all charges be dropped. And we should fill the streets with rage if they are not. We should make the Tories pay a massive price if they do not order the police to back down.

It is good to see David Lammy and Labour rethinking their position on the Police, Crime, Sentencing and Courts Bill. It is an outrage that they were ever considering abstaining on a piece of legislation that would criminalise any form of collective protest over any injustice. It’s also an important step forward that Lammy does talk about violence against women in the family — where the majority of these crimes take place — but this merits a much wider debate about the structures that reinforce and promote this violence in every sphere of women’s lives from cradle to grave.

Back in Clapham, by the end, the police attack had transformed a vigil for a murdered woman into a militant protest against state violence. For that is what it was: heavily armed thugs, operating as a paramilitary force, manoeuvring in phalanxes, to attack an embryonic radical movement of young women.

By the end, there were thousands of women chanting anti-police slogans and giving clenched fist salutes: “Police stand down,” “You do not protect us.” “This is a vigil: we do not need your services,” “Arrest your own,” “You are the problem,” “Shame on you.”

Calls rang out on the common and subsequently for the resignation of Cressida Dick – and to a lesser extent Priti Patel. For those of us already mobilising, that Dick and Patel have acted in this way is no surprise. It was Cressida Dick that ordered the execution of Jean Charles de Menezes in Stockwell in 2005 – only a minute’s walk away. Priti Patel has said that her intention is to give the police greater powers to prevent and shut down non-violent protests.

Black communities have a long and bitter experience of brutal, murderous policing which is why the calls to defund the police rang out on this side of the Atlantic as well as in the USA during the Black Lives Matter demonstrations. There is no question that the police behaviour on Clapham Common last night is a preview of greater state violence to come.

There will be a debate over the weeks and months ahead about how we should respond to male violence against women. It should be and must be a space to open up discussion and exchange about why it is systemic and corrosive – and why increased police powers will criminalise women – especially the most marginalised – rather than “protect” them.

Let us hope that this is indeed the birth of a new women’s movement – angry, militant, radical, led by women, fighting not just male violence and misogyny, but the system that devalues women – literally and figuratively from the moment of birth until the day of death. We echo the calls of rage from women across the globe –and the demands to empower women and to educate men. Until we do not have to hold another vigil for a murdered woman, until we do not have to mourn another sister whose life has been restricted and subjected to violence, both from our patriarchal and capitalist society and from the state that supports it. Not one more.

Anti*Capitalist Resistance activists reflect on the police attack on a women’s vigil in South London, March 15, 2021