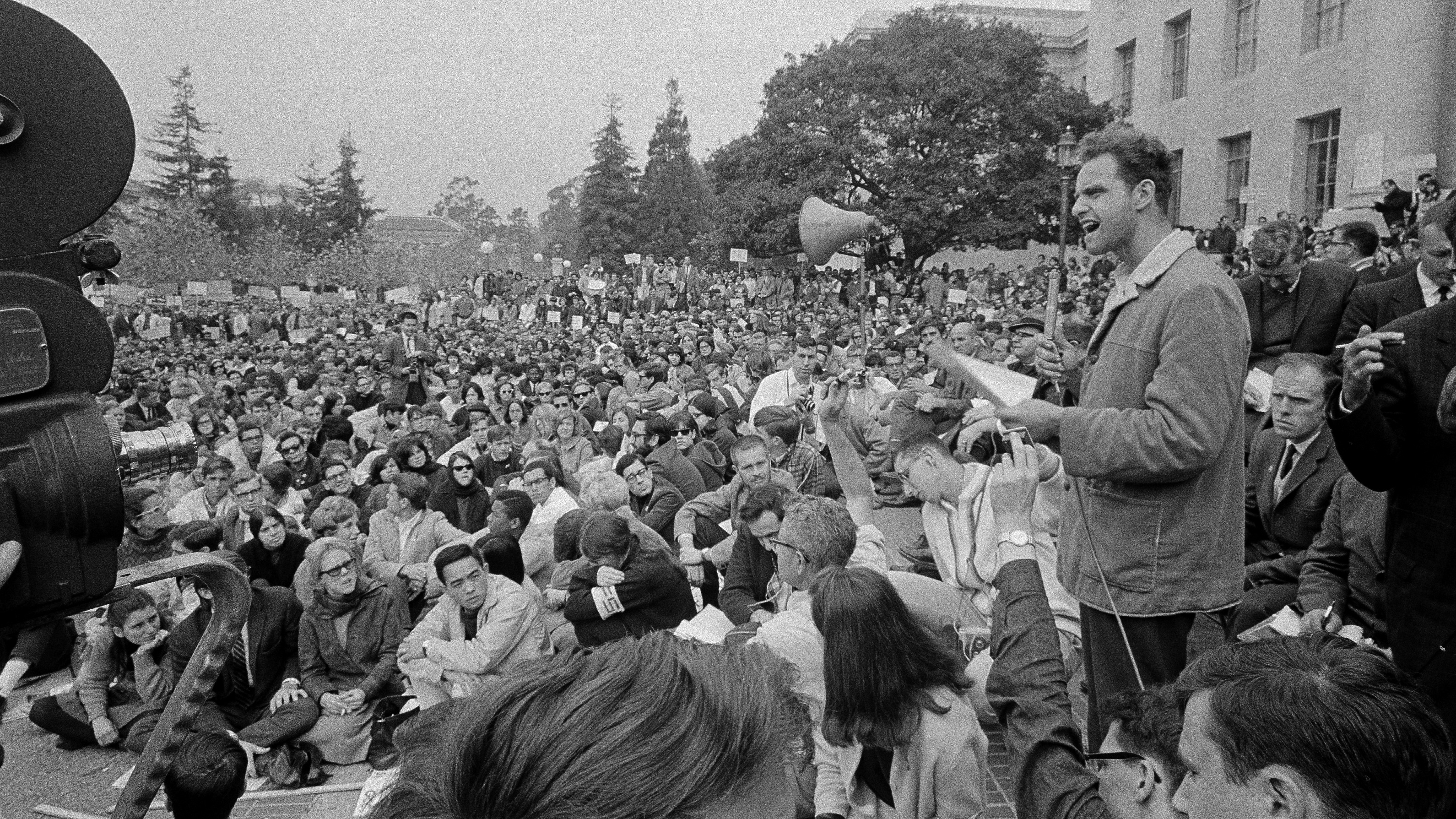 The 1964 Free Speech Movement brought the struggles for civil rights to university campuses — the “ivory tower” would never be the same again.

BOTH SCHOLARLY AND popular writing about the experiences, on the one hand, and the short- and long-term impacts, on the other hand, of the 1960s on colleges and universities swing widely and wildly. They range from undiluted praise usually with a peon to a lost golden moment to unrelenting condemnation, with many voices between the extremes.(1)

The imperative to draw and act on more accurate historical memory and complicated lessons from the 1960s – what was gained, and what’s been lost — has never been greater than our present moment. The deluge of historical commentary obfuscates more than it informs. Competing narratives — of rise and fall, constant decline from a mythical golden age of classics and canons, decline and relative rise, and so on — conflict and confuse.

Let me be clear that I write as a sympathetic fellow participant in campus-based Sixties activism. I was a member of Students for a Democratic Society, National Mobilization Committee to End the War in Vietnam, Students for SCLC including marching with a young Jesse Jackson in the streets of Chicago. I “got clean for Gene” McCarthy in 1968, then moved to Toronto for graduate studies in 1970.

I am shaped by those experiences personally, politically, and intellectually. At age 73, I continue to feel its stimuli and its contradictions. Thus, I emphasize the limits of those experiences, and the continuing constructive lessons that few authors who experienced the 1960s or write after the fact recognize.

I argue that we need to embrace and debate “lessons of the Sixties” and grapple with the ways in which the Sixties remain critical elements of “the origins of our own times” for worse and for better. I elaborate on this here, and in My Life with Literacy: The Continuing Education of a Historian and selectively in recent essays.(2)

Historians’ more recent and at least partly documented writings display the problems. In more than 600 pages and more than 100 interviews, Ellen Schrecker’s title, The Lost Promise: American Universities in the 1960s, is a giveaway. Repeating more than questioning or challenging the dominant New Left narrative of rise-and-fall, I find this a selective, sometimes superficial account of certain locations and experiences.

Far too often, “the promise” is exaggerated in itself and out of its historical context. Simultaneously, its loss is blown out of proportion. Schrecker exaggerates the external attack and immediate decline of universities. But The Lost Promise appeals to commentators.(3)

Commenting on Schrecker but attempting to ask continuing questions, Steven Mintz notes, “For many aging baby boomers and their parents, this country’s golden age does not lie shrouded in a mythic past but, rather, exists within living memory.” I argue that the partly tarnished era also shapes our efforts and structures in facts, myths and aspirations, concretely and ideologically.

The plethora of commentary surprisingly neglects many influences large and small. We ignore them at our loss. We need to make the connections clearer to understand the constant shaping and reshaping of past and present. (My essay benefits from email exchanges with Mintz. I thank my longtime colleague and friend.)

I seek to replace the competing incomplete and distorted narratives by emphasizing the power and accuracy of complex, contradictory shaping forces and contexts. This is the lesson of history and the humanities — old, and their reformations that are central to the 1960s. Those legacies are too often unrecognized. Yet they continue.(4)

Central to this critical awareness is the imperative to dismiss dominating, simplistic, self-serving, ideological and mythological substitutes that hew almost completely to either the negative or the positive. Elements of both demand our attention.

Our understanding today is dominated by, the flipside of loss of historical memory that permeates not only scholarship and universities but also politics, economics, and society and culture more generally. It is debilitating, and in its extent, historically unprecedented.(5)

These include for example, the “federalization” of research; “massification” especially of public higher education; and gradual integration by race, ethnicity, gender, and religion, unquestionably a major step forward — but also laying the basis for today’s explosive crisis of crushing student debt.

Along with these have come stereotypical conflicts of “elites” versus “popular classes,” among them students in four-year and graduate universities and other forms of post-secondary education; and of course, the rise and waves of student activism and radicalism.

Among the persisting, confusing and disorienting myths are the “rise and fall” of the humanities with their (actually never-dominant) great books and canonical general educational requirements; the opposition and competition between a dominating culture of science versus the arts and humanities; and the dating of the challenge of STEM and business to the status of liberal arts and sciences. Lost in the intersections of mazes are questions of timing, proportions and processes, and the radical exaggeration of the novelty of recent and contemporary problems.

Take a set of interrelated factors. The complex and often contradictory facts that stimulated the rapid expansion of campuses and enrollments began at the federal and then state levels following World War II, including the segregationist GI Bill and state university systems.

By the early to mid-1970s, that led to the over-expansion of systems and campuses, underfunding of students, and over-production of PhDs for available positions especially but not only in the arts and humanities and social sciences.(6)

Historical memory was lost in the confusion of complexity, conflicts, and contradictions. Battles over Great Books and canon do not help. Nor do the sometimes surprising, irrational conflicts over different competing forms of “interdisciplinarity” and “disciplinarity” that continue from the late 1950s and especially the 1960s and 1970s.

For me and hundreds of other humanists and social scientists, the 1960s and 1970s was a great age of the then “new histories” whose contributions and legacies continue, but are too often un- or under-appreciated. Few graduate or undergraduate programs require or offer courses in the foundations of their own fields. That was not true in my student years.(7)

To his list, I add Black, women’s and gender, and ethnic, which embodied great excitement, challenge, and hope (despite their partial reintegration into the corporate university model), as well as comparative studies; social science history; political economy, among others.

When those consequential movements are remembered, it is most often to condemn them ignorantly and fallaciously. Among the best correctives are Joan Scott, On the Judgment of History (2020) and John Guillory, Professing Criticism: Essays on the Organization of Literary Study (2022)

Lost too is the foundational fact recognized by all great scholars, and a hallmark of the 1960s through at least mid-1970s, that scholarship is inescapably political but not partisan or narrowly ideological.

It is no accident that conservative and right-wing academics immediately indict those with whom they disagree as “political” and therefore biased, but never utter a word about their fellow conservatives who cross the lines of scholarly integrity from Allan Bloom, Thomas Sowell, and Peter Wood to Francis Fukuyama and John McWhorter, the latter featured in the Opinion pages of The New York Times. That objectivity and advocacy are not necessarily opposed in fact-based, responsible, and honestly argued scholarship is among the lessons of the 1960s that we lose at irreplaceable loss.(8)

The myth that academic life and public life are oppositional contradicts the very premises and promises of the “world” and “missions” of scholarship itself. In 2022, we suffer daily with the consequences. One consequence is the recent misconceived conservative campaign to reconquer “presentism” in historical analysis. It is predictably self-contradictory.(9)

In so many ways, we are lost in the incessant storms of academic climate changes with no clear topological or archeological guides, maps, or compasses, to play with rhetorical interdisciplinarity.

A final note falls on education itself, teaching and learning, faculty and students. Part of the narrative is a trope of a relatively short-lived but contradictory “rise” and then steep and prolonged “fall.” This embraces a coming together of some New Left and radical students and some activist and/or sympathetic faculty members, mainly but not exclusively young professors.

The extent of this new intellectual-cum-political collectivity or collaboration cannot be estimated. But it is lost among the combined pressures on faculty including cancelation of contracts and denial of tenure, changing political economic and educational pressures on both students and faculty.

In Mintz’s (2022) words: “As universities grew in size and functions, the student experience grew increasingly impersonal.” The same observation is made for the 1950s, 1960s, and 1970s, and every decade since, even as enrollment declines now.

My own experience and, as he tells me, Mintz’s differed from this generalization. Close, and for graduate professors and fellow students long-lasting, relationships characterized my undergraduate and graduate years. Not only were professors always available in their offices, some invited students to their homes for informal class gatherings, potluck dinners, wine and cheese socials, and dinners with their families.

These relationships existed relatively independently of politics, ages and ranks. My undergraduate advisor, a formal, moderately conservative New Englander not only invited me to be his teaching assistant for course credit when all his doctoral students were researching their dissertations in Europe; he volunteered to nominate me for fellowships and awards.

We spent hours in his office with the (then print-only) American Historical Association Guide to Departments searching for potential graduate programs. My wife and I lunched with his family in London several years later on our first visit when he served as academic advisor to the U.S. Cultural Attaché.

I had many more experiences that combined the professional, the personal, and the intellectual. I not only baby-sat for fair pay for my graduate advisor, for several years, we played squash and shared the sauna afterward weekly. We had collegial conversations.

Midway through my graduate program, he and his family became my wife’s and my close friends, a relationship that continued until his death. Never did it compromise his unwavering commitment to constructive critical intellectual engagement and personal professional support.

He has not alone. The future first woman president of Smith College, Jill Ker Conway, with whom I took a doctoral seminar and who also co-taught my wife in the first course on the history of women offered in Canada, often took me to lunch. She and her husband shared home-cooked dinners in our graduate student tenement apartment. We remained in close connection with them until their deaths. At 95, her co-instructor Natalie Zemon Davis emails me almost every week.

These were all elements of the transitional, transactional, and transformational university cultures — plural — of the late 1950s into the 1970s. They combined my experiences with my somewhat older professors and advisors. We were not alone in this.

For the next five decades, I did my best to continue their examples in diverse university environments and cities. Those aspects of the 1960s persist. But so too do increasing pressures for students and universities to choose between “earning” and “learning,” and sit namelessly, unmotivated in larger lecture halls.

Those are also lasting legacies. That pedagogical “plague” now joins with remote instruction on Zoom and platforms like Minerva to overdetermine and minimize the “college experience.” The latter is now little more than a marketing slogan.