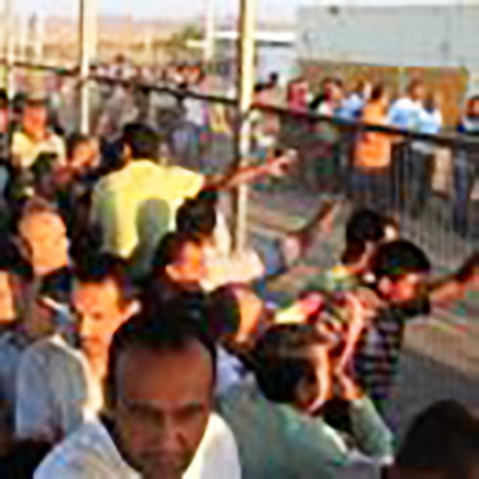 LESS THAN A month has passed since Israel’s “government of change” was sworn in, and to bridge the gaps in the country’s most heterogeneous coalition ever, it has declared itself “anti-ideological.” Controversial issues between Right and Left are off the table, such as West Bank settlements, religion and state, and the composition of the Supreme Court. However, ideology is the bread and butter of Israel, and ideological issues cannot be kept from the morning news. The first of these was the fate of Eviatar, an illegal settler outpost erected on the lands of the Palestinian village of Beita; initially, when the new government took over, Eviatar was slated for evacuation and demolition.

At the same time, the Citizenship and Entry Law came up for its annual approval. This is a temporary order from 2003, the height of the second intifada. Eviatar and the Citizenship Law are both purely “ideological” issues. A right-wing party led by Naftali Bennett supports the establishment of new settlements and does not call them “illegal” even if built without permits. On the left side of the same coalition, Meretz denounces settlements, and it has been petitioning the courts against the Citizenship Law since 2006.

The commitment not to engage in ideology for unity’s sake has brought the coalition’s left side, Meretz for instance, to rotten compromises, dictated by the right-wing composition of the government and the Knesset. Although in the new coalition there exists a kind of balance between Right, Center, Left and the Islamic movement, the weight of the Right is decisive. Labor, Meretz and the Islamic Movement must make allowances for their right-wing partners, who have the right-wing Knesset opposition, led by Netanyahu, breathing down their ideological necks. This—even though that opposition refuses to recognize the government’s legitimacy, calls Bennett a traitor, and describes the coalition as a danger to Israel’s security.

Meretz, Labor and the Islamic Movement were forced to swallow the compromise reached by Bennett with the settlers in Eviatar, according to which the settlers will be voluntarily and temporarily evacuated from the outpost, their houses left intact, and the army will occupy the place until the status of the lands is clarified. What began in Netanyahu’s time as a demolition by agreement, became under Interior Minister Ayelet Shaked a new “legal-to-be” settlement for the first time in 20 years. This is an impressive achievement for the settlers and a scorching loss for the Left.

We did not manage to recover from the blow of Eviatar before the Citizenship and Entry Law fell on us. Under pretext of security, this law keeps citizenship from West Bank or Gazan Palestinians who marry Palestinian citizens of Israel. It discriminates against (Arab) Israeli citizens on ethnic grounds, with the justification that spouses from the territories might be terrorists. As noted, the law originated during the second intifada, when there were 45 cases in which residents of the Occupied Territories holding Israeli identity cards took part in hostilities. For 17 years, this discriminatory law was renewed without debate, although in recent years violence by Palestinians holding Israeli IDs has dwindled to zero. The number of families whose lives are hamstrung by the Citizenship Law today stands at 13,000.

Israeli Foreign Minister Yair Lapid has openly declared that the problem is not security but demography. Lapid, architect of the new government, has thus confirmed the claim of the law’s initiators, who declared that marriage serves the Palestinians as a means of “exercising the right of return.” Supreme Court Justice Mishael Cheshin, who wrote the majority opinion in the decision not to repeal the Citizenship Law, ruled that “Palestinian residents of the area are enemy nationals who constitute a risk group for the citizens of Israel, and therefore the state may enact a law prohibiting their entry into the country.” In so doing, Cheshin camouflaged this discriminatory law under the guise of a security need—instead of its real motive, demography.

Not only is Cheshin’s claim not backed by facts, but it doesn’t make sense. The Palestinian Authority (PA) maintains intimate relations with the State of Israel, primarily by the close security coordination between the parties, confounding the notion that it is an “enemy state.” Accordingly, its citizens cannot be considered enemy nationals. Moreover, the PA itself is an Israeli invention. Newborn Palestinians in PA territory are listed in the Israeli Population Registry and given an ID number, which appears in a green ID card issued by the PA. The card is identical to the blue Israeli identity card, but its color determines the civil status of those who carry it, or rather, their lack of status.

Furthermore, 150,000 “enemy nationals” enter Israel daily to work; the accepted currency in the PA is the Israeli shekel; Israel and the PA have a uniform customs arrangement; Israel controls all entries and exits into and out of the West Bank and Gaza; and Israel can shut off the electric power at will. In other words, Palestinian residents of the West Bank and Gaza are Israelis for all intents and purposes, except that they lack civil rights. In the West Bank, they are subject to the Israeli Civil Administration, subordinate to the military commander, the supreme sovereign who determines everything; the Palestinian depends completely on his will.

In fact, Palestinians have no need to exercise the right of return through the back door. Those who are enabling that back-door return are precisely the half million Israeli settlers. By preventing a Palestinian state, they have, in effect, transformed the entire territory between the Jordan River and the Mediterranean into a single political unit. The Citizenship Law was meant to reinforce the illusion of a Green Line separating the West Bank and Gaza from Israel. If this imaginary line ever existed, however, it has long been erased, despite the porous Separation Barrier.

While the Knesset clashes over the Citizenship and Entry Law, which affects 13,000 Palestinian families who pose no security or demographic threat, the “government of change” avoids discussing the fate of 5 million Palestinians of the territories whom it controls in all matters, from freedom of movement to family reunification. The use of legislation to keep Palestinian citizens of Israel from marrying and starting a family only reveals the contradiction in a state that defines itself as Jewish and democratic. The Citizenship and Entry Law violates the most basic human rights. It is no coincidence that it has not become a standing law, because it harms Israel’s image as a democracy. More importantly, this discriminatory legislation cannot stop the processes taking place before our eyes, which are creating a single political, economic, demographic and geographical reality between the Mediterranean and the Jordan River.

In recent weeks, Palestinians have been demonstrating against the PA for cancelling the parliamentary elections, and for the beating to death of social activist Nizar Banat by Palestinian security forces. These demonstrations should help the Israeli public, and the international public too, to understand the “enemy entity.” The PA is oppressing the people it is supposed to represent, a people that strives like all others for democracy, social justice and basic rights.

The participation of Meretz, the Labor Party and the Islamic Movement in the Bennett-Lapid government gives a boost to the Israeli Right, which is trying to halt political, demographic and geographical processes created by its own actions. The Right regards the Palestinian question as “shrapnel in Israel’s ass” (Bennett), a problem with no solution. It legislates racist laws to delay the end, while simultaneously settling on every hill and under every fig tree, abusing Palestinian farmers and shepherds, plundering their lands while the army stands idly by. As we get closer to the reality of one state, Israel will continue legislating racist laws, on the way to becoming a state that is indeed Jewish but certainly not democratic. This is now happening with the help of the Zionist Left, which by linking its fate to the right-wing parties is losing its right to exist.