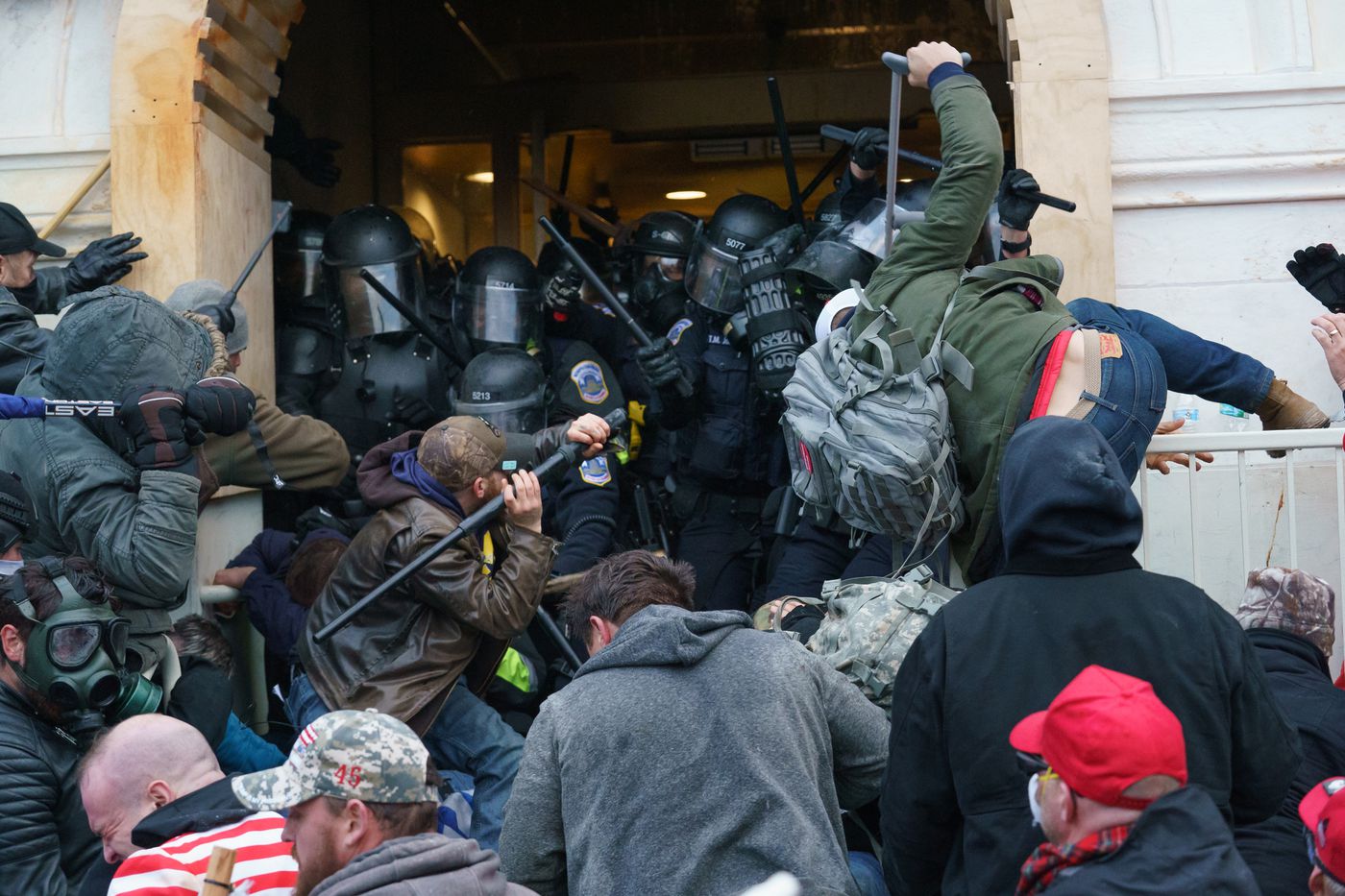 JANUARY 7, 2021 — Much will be heard in coming weeks about the “strength and resilience of America’s democratic Constitutional institutions” in the face of the defeated president’s insistence on overturning the November election, and an attempted “insurrection” incited by Donald Trump. It’s reasonably safe to predict that the chaos surrounding the formal Congressional ratification of the Biden/Harris Electoral College victory won’t be repeated at the January 20 inauguration — both because Trump is so isolated and discredited now, and because the police and security presence then will be absolutely massive in contrast to yesterday’s debacle.

The reality is much more complicated, and a lot less rosy. Those sacred “institutions” are actually quite vulnerable to anti-democratic manipulation, in part because they were never designed to be democratic in the first place. The Trump game of “Grand Theft Election” fell apart for a number of reasons, but under different but entirely conceivable circumstances could have been much more threatening.

1. American democracy, such as it is, was saved by massive election turnouts of Black — and in crucial swing states, Latinx and Indigenous — voters that defeated Trump by margins too large to credibly deny. In places like Georgia in particular, this is a tribute to many years of on-the-ground grassroots organizing that overcame systematic voter suppression measures by rightwing gerrymandered state legislatures. Although we would argue that these heroic efforts are worthy of a better cause than the wretched neoliberal-led Democratic Party, they’ve undoubtedly made an historic difference in U.S. politics.

2. This longterm struggle is by no means over. As Republican figures desert Trump’s sunken ship — many of them having been his most notorious enablers — their party will be divided over Trump’s “legacy” and whether to coexist and cooperate with the centrist-neoliberal Biden administration, or carry on the wreck-to-rule obstructionism they’re pursued ever since Barack Obama’s election. What will unite Republicans, especially at state levels, is voter suppression — the only way this party can hold onto power as the white proportion of the U.S. electorate ages and declines.

That’s no idle threat. After the smoke cleared in the evening, if you paid attention to some of the Republicans speeches purporting to uphold the election result, they said it wasn’t up to Congress to “intervene in states’ right to run their elections.” One of those speakers was Senator Rand Paul, who before the Georgia runoffs had opined that encouraging more people to vote “could alter the result of the election.” No kidding!

What’s needed in fact is strong federal voting rights legislation, precisely to intervene where state legislatures or administrations — not only in the Deep South — conduct voter roll purges, obstruct registration, restrict early and mail-in voting that helped make the November turnout historically large in the midst of the coronavirus crisis, blatantly reduce polling sites for Black communities, and racist partisan gerrymandering. Whether the Biden/Harris administration will fight for voting rights, not just talk about it, will be a very big question. (Beyond this is the bigger constitutional question of eliminating the “sacred institution” of the Electoral College, which disempowers the national popular vote and enables malicious mischief in closely contested states.

3. Politicians and media are describing what happened yesterday as an “insurrection.” This is a piece of nonsense that sullies the good name of insurrection.

As a premeditated and potentially murderous mob action, the attack on the Capitol is indeed very serious, and an ominous threat of rightwing terrorism that may be coming. No one can miss the contrast between the brutal response to many Black Lives Matter protests against police brutality as opposed to the fact that apparently few if any invaders yesterday were arrested inside the building. (Later arrests were for curfew violations, after the events of the day.)

At his Wednesday morning rally repeating lies about his stolen “landslide” victory, Trump called on the crowd to “march to the Capitol,” indicating he’d be with them. Of course, he then retired to his TV-bedecked White House bunker. When calling on people to turn out in Washington on January 6, he’d said the day would be “wild.” Beside the fact that all these were virus super-spreader events, it was mob incitement for sure.

But an “insurrection,” meaning an attempt to seize power? That kind of thing requires more than semi-spontaneous attacks on government offices. From the left, insurrections against repressive regimes require mass popular movements capable of waging general strikes and forcing splits in the military apparatus. From the right, coups may employ mob violence as an auxiliary but the real action is tanks in the streets, targeted roundups and arrests, and organized terror against dissident populations. None of that was even remotely present in Washington DC yesterday, to say nothing of the country as a whole. This is not to underestimate the real threat that is posed from the white-supremacist far right and the legion of Trump voters living in a reality-free ideological universe who think their election was “stolen.”

4. The Trump/Republican Grand Theft Election threat, understood and widely discussed ahead of time by the Transition Integrity Project and many authors, was not a joke. The shambolic way in which it’s collapsed shouldn’t deceive us.

If the November election had been closer, if the Trump gang’s post-election moves had been more competently organized and coordinated, if the legal maneuvers hadn’t been in the hands of the barely-warm corpse of Rudy Giuliani, if a few state and federal judges had been as corrupt as Trump himself — and perhaps if governorships in Michigan, Pennsylvania and Wisconsin had remained in Republican hands after 2018 — the United States might have truly faced an existential threat to the Constitutional institutions that have served its elites so well for more than two centuries.

The rickety state of U.S. democracy is as vulnerable to destruction from within as, it turns out, its government and corporate computer systems are to Russian hacking. If carried to its outer extremes, another Grand Theft Election scenario could conceivably break the country apart, not now but sometime down the road. Yes, it could happen here.

5. Yesterday’s violent debacle has shattered what remained of the Trump presidency, and probably (although one can never be certain) destroyed his own and his crime family’s future political perspectives. Rush Limbaugh actually puts it accurately: “If you want to have a life in Washington DC today, you have to denounce Trump now” (radio broadcast, January 7). You don’t have to be a Limbaugh fan to appreciate the hypocrisy of these sudden Republican conversions.

It Could Happen Here

At long last, leading circles of the corporate ruling class weighed in as Twitter and Facebook suspended Trump’s access to his cult followers, the National Association of Manufacturers called for his removal by the 25th Amendment, financial industry leaders like CEO David Solomon of Goldman Sachs, Jamie Dimon and others obscenely enriched by Trump’s policies turned against him. He’s no longer useful to them.

Trump running in 2024 could destroy the Republican Party for good. That does not mean the end of what’s called Trumpism, even if it now has to go forward without Trump.

In this regard, the analysis by Samuel Farber published January 3 in Jacobin, Trumpism Will Endure, is highly recommended. Although writing before Trump’s self-implosion yesterday, Farber nails the critical point: “Perhaps the most useful way to understand Trumpism is as a right-wing response to the objective conditions of economic decay and a perceived moral decay.”

In this context, “perceived moral decay” centers around rightwing resentment that the standing and privileges that too many white males have assumed as given are now under challenge. This requires a deeper discussion than is possible here, but it gets to the heart of one reality of U.S. society and, in particular, the central problem confronting those of us on the socialist left: A large sector of the working class, among white workers in particular, has been recruited to authoritarian, rightwing racist politics.

It remains to be seen whether their loyalty can be transferred from the Trump cult to a new standard bearer. But that’s secondary to the fact that working class “Trumpism” will remain as a major obstacle to struggles to gain serious reforms that can be won and maintained.

To understand why and how that’s happened requires coming to grips with the second reality of our condition: the objective immensity of the crises that await Biden and the narrowly Democratic-controlled houses of Congress. The COVID catastrophe, medical system collapse and the mess of the vaccine rollouts; the tens of millions of working and middle-class families facing eviction, permanent unemployment, bankruptcy, ruin from debt and medical expenses; state and local governments hopelessly underwater; and overhanging it all, continuing climate change and environmental disasters made worse by four years of Trump.

The situation absolutely demands big measures: large-scale economic stimulus and relief, a mobilization of public health and possibly military resources to make vaccinations happen, a “warp speed” transition from the fossil fuel industry, a true Green New Deal and Medicare for All, and immediate closure of the obscene for-profit immigrant detention centers, among other things. What then is to be expected from those acclaimed “moderate” forces in both parties, as Democrats ponder how to use the power they’ve been given and those on the Republican side figure out whether to be “bipartisan” or obstructionist?

For the left and the social movements, all the more important to remain active and mobilized to fight for what we need, not for a few crumbs. Celebrating Trump’s self-destruction is certainly in order; a leftwing honeymoon for Biden most certainly is not.