“And I contend that the cry of ‘Black Power’ is, at bottom, a reaction to the reluctance of white power to make the kind of changes necessary to make justice a reality for the Negro,” King said. “I think that we’ve got to see that a riot is the language of the unheard. And what is it that America has failed to hear? It has failed to hear that the economic plight of the Negro poor has worsened over the last few years.” (Martin Luther King, Jr., in response to a frequent question asked by reporters in 1966) 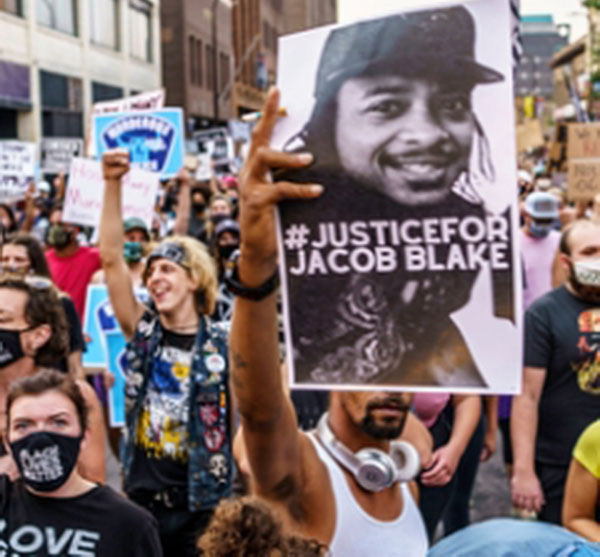 On August 24, 2020 protesters march against police brutality and racism in Minneapolis, Minnesota, the second day of protests in Kenoska after the shooting of Jacob Blake. (Photo by Kerem Yucel / AFP)

ONCE AGAIN A young Black man, 29, is shot in the back on August 23 by a white cop in the city of Kenosha, Wisconsin, about 40 miles north of Milwaukee where the majority of African Americans in that state live.

The man, Jacob Blake Jr., had intervened in a street dispute between two women. The cops arrived and immediately challenged Blake. Two of them shot taser guns at him.

Then when he walked to his car where his three young boys of 3, 5 and 8 years sat in the back seat alone, the white cop grabbed Blake’s shirt and then fired seven shots at his back with four hitting him. Afterwards, the cops said Blake had a knife on the car’s floorboard.

Bystanders yelled at the cops throughout the conflict. The cops did not care. A person with Black skin is by definition a “threat” to safety.

Blake survived the shooting. He lies in a hospital, paralyzed from the waist down, his spinal cord shattered. When his father Jacob Blake Sr. saw him, he reported that his son’s leg was shackled to the bed because of an outstanding misdemeanor warrant. Was he a flight risk??

After an outcry the shackles were removed, and the warrant was vacated.

Blake grew up in Evanston, Illinois, a suburb of Chicago. His grandfather had been a leader of the fair housing fight in the 1960s. His family were community activists.

Blake’s family said he moved to Kenosha for a fresh start. He was employed and had a young family. Kenosha is 10 percent African American among nearly 100,000 people.

Immediately after the cop shooting, the streets filled with protests. The Black Lives Matter movement is strong in the area. White and Black protesters demanded that the cop be arrested and prosecuted.

While the protests were peaceful, a few people did carry out property vandalism in the evening. As has occurred in other cities, some of these could be white nationalist provocateurs who came to incite a “race war.” A Facebook post had called on white extremists to come to Kenosha.

Quickly solidarity protests spread to Milwaukee and across the country from New York City to Oakland, California. Signs included, “Justice for Jacob” and “Time for change is Now.”

The cops reacted with excessive force. President Trump tweeted in support of the police and called the Black Lives demonstrators “thugs.”

Yet when a group of armed white vigilantes arrived to “defend” property from the “rioters,” the Kenosha police welcomed them and passed out bottles of water.

One of the thugs was a 17-year-old white man, Kyle Rittenhouse, from the nearby town of Antioch, Illinois. Carrying an AR-15 long rifle, he joined other white supremacists and the heavily armed police.

The white vigilante teenager then shot and killed two white protesters and a third man. The police did nothing when he approached them, allowing him to drive home and sleep in his own bed.

After public outrage since the killings were on video, Illinois police arrested the killer. The prosecutor in Wisconsin charged him with first degree intentional homicide and five other counts of murder.

Rittenhouse’s lawyers won a 30-day delay of his extradition hearing to prevent his immediate relocation to Wisconsin. They claim he acted in “self-defense.”

The Kenosha police chief said the protesters were at fault for being out on the streets past curfew. The white nationalist murderer was a “victim” according to the far right.

The contrast in treatment by the cops toward the white vigilante and Blake make clear the double standard of “race” and racism in the country. For the cops, skin color is the decisive factor — The “white” man is a legitimate “American” and the Black man less than human.

President Trump visited Kenosha on September 1 to meet with and praise the cops. He visited some damaged businesses, but refused to contact the Black family or the families of the two white protesters killed by the white vigilante.

Both men killed — Anthony Huber, 26, and Joseph Rosembaum, 36 — were Kenosha residents, unlike the killer from Illinois. Trump said the vigilante had to defend himself, the line of the far right.

In an unprecedented response to the Kenosha shooting and Trump’s racism, top sports players and leagues reasoned with work stoppages.

In the National Basketball Association (NBA) Bubble (a secure location near Orlando to mitigate the pandemic), the Milwaukee Bucks boycotted their August 26 first-round playoff game against the Orlando Magic in protest of the shooting.

Later that day the NBA and the National Basketball Players Association announced that in light of the Bucks’ decision to refuse to play, all NBA games for the day were postponed.

“People get tired of hearing me say it, but we are scared as Black people in America. Black men, Black women, Black kids, we are terrified.”

On August 26, the game between the Milwaukee Brewers and Cincinnati Reds of Major League Baseball (MLB) was postponed in protest. On August 27, seven more MLB games were postponed.

Players of the WNBA’s Washington Mystics each wore a white T-shirt printed with seven bullet holes on the back in honor of Jacob Blake. As one stated to the media, it was about more than basketball: “When we go home, most of us are still Black.”

The National Hockey League (NHL) announced the postponement of their four playoff games for August 27 and 28. The NHL’s players are majority Canadian, with only a few Black players.

In tennis, the 2020 Western & Southern Open announced that all matches scheduled for August 27 would be rescheduled for the following day after Naomi Osaka threatened to boycott her semifinal. Osaka’s father is Haitian.

On August 28 in Washington D.C. tens of thousands marched and rallied at the Lincoln Memorial under the banner of “Commitment March: Get Your Knee Off Our Necks” in reference to George Floyd’s death.

The date marked the 57th anniversary of the 1963 March for Racial and Economic Justice where Martin Luther King Jr gave his “I Have a Dream” speech.

“We must never forget the American nightmare of racist violence exemplified when Emmett Till was murdered on this day in 1955, and the criminal justice system failed to convict his killers.”

“Sixty-five years later (after Till’s murder), we still struggle for justice — demilitarizing the police, dismantling mass incarceration, and declaring as determinately as we can that Black lives matter,” King III said.

Family members of victims of police killings and shootings including Jacob Blake’s father spoke. The father spoke the obvious truth: “There is two systems of justice: One for whites and one for Blacks.”

“Some say to me, ‘Rev. Al, y’all ought to denounce those that get violent, those that are looting,’” Sharpton said. “All of the families (of victims of police and vigilante violence) have denounced looting. What we haven’t heard is you denounce shooting.”

Many speakers focused on demands to arrest the cops and prosecution of the cops. Others emphasized the need to vote in the presidential election November 3.

The local leaders of the BLM emphasized that mass protests are the primary way to make change. In fact, the modest reforms made to date have been because of the movement.

The white backlash led by Trump and his enablers and the white vigilantes he inspires, including the white Kenosha killer, is intensifying. A group of protesters marching from Milwaukee to the August 28 protest were shot at in rural Pennsylvania by a white gunman.

“The activists were at the Hampton Inn in Bedford Township Tuesday when a man allegedly showed up and began firing a gun, according to state police.” (York Daily Record)

The shootings and clashes by cops and vigilantes are just beginning. Trump and his followers seek more violence to justify his re-election. The stakes are high.

The three cops involved in the Kenosha shooting have been placed on paid administrative leave. The law in Wisconsin immediately sets up an “independent investigation” that reports to the Kenosha district attorney to decide if charges should be filed.

Although that law resulted from another Kenosha police killing fifteen years ago of an unarmed civilian, Michael Bell Jr. – who was white – the reality is that the local DA works closely with the police.

Jacob Blake may face charges for resisting the cop who shot him. His misdemeanor arrest warrant was vacated after he survived the cop’s murderous attack and the family posted bond, but the charges may still stand.

As so often happens, the police and right-wing media emphasized Blake’s alleged crimes. “Such allegations are a common and patently unfair response to tragic events that need to be corrected,” said Daniel Medwed, professor of law and criminal justice at Northeastern University School of Law and a board member of the Innocence Network.

None of this is relevant to the shooting. Yet in every case of cop brutality, shootings and murders, the victim’s alleged crimes and flaws are used by the cops to justify their violence.

“So many people have reached out to me saying they’re sorry that this has been happening to my family. Well don’t be sorry because this has been happening to my family for a long time, longer than I can account for,” said Letetra Widman, Blake’s sister. “It happened to Emmett Till, Emmett Till is my family. It happened to Philando (Castile), Mike Brown, Sandra (Bland).”

Donald Trump’s re-election strategy is simple and deadly: to mobilize and win the white electorate that remains 67% of the population and suppress the votes of nonwhites. White fear has worked in previous elections.

The ruling class must decide if racial conflict is its “solution.” What the Movement for Black Lives shows is that only popular struggle, strikes and mass action can turn back the racist white nationalist forces.

Rebellions work, as history teaches us.