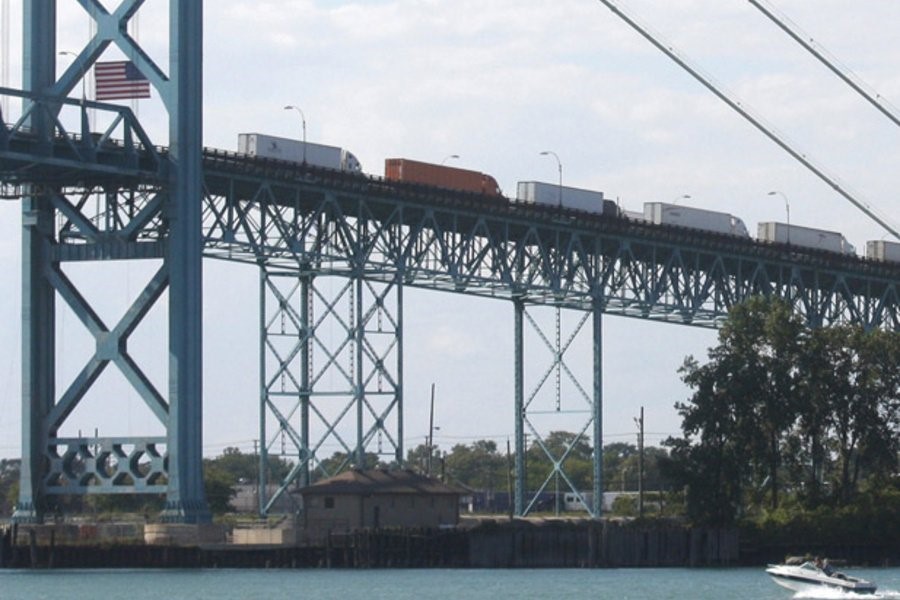 ANTI-VAXXERS HAVE parked rigs and trucks in Ottawa, Canada’s capital, for more than a week. They are demanding that all COVID-19 restrictions be lifted, despite the fact that most are provincial measures rather than federal ones.

Early this week 50-70 vehicles blocked the Ambassador Bridge that spans the Detroit River, from Detroit, Michigan to Windsor, Ontario. Over $320 million in goods cross the border by truck daily, including food as well as autos and auto parts. Given just-in-time delivery both GM and Stellantis plants have sent workers home for lack of parts. The bridge remains blocked on the Canadian side, with a pile up of trucks on the bridge. Traffic has been diverted to the Blue Water Bridge in Port Huron (over an hour north of Detroit) while cars are able to get across the border via the Detroit-Windsor tunnel.

Is this a demonstration workers should support? Tony Leah explains why the demonstrators in Ottawa and some other parts of Canada are NOT workers, for the most part, and are not fighting for workers’ rights.

The big rigs that have played such a disruptive part in the protests were brought there by owner-operators or by owners of trucking companies. No working class truck driver has the wherewithal to take a 6-figure vehicle to a protest and park it for days and weeks on end. Working class truck drivers have bosses (who own the trucks) and have to be on the road to earn money. 90% of Canadian long-haul truckers are vaccinated. They don’t support the protests at all — see the statement from Teamsters Canada. Some of the leading owner operators and trucking company owners in the protests have threatened workers on picket lines in the past.

NOT FIGHTING FOR WORKING-CLASS DEMANDS

The protests have not demanded higher wages or safer working conditions for truck drivers. There is a huge issue in Canada (maybe the US as well?) of trucking companies putting pressure on drivers, especially immigrant workers, to sign contracts that they are “independent contractors” so that the company doesn’t have to pay them minimum wage or overtime. The mis-classified drivers are also disentitled from workers comp and unemployment insurance. They are subject to massive wage theft. The protestors don’t mention these issues either. Instead, they are fighting for an end to public health measures — which only benefits companies that want workers to get back to making profits for the owners, without protection.

The protests have included people with Confederate flags and swastikas, they have vandalized homes and businesses with pride flags or signs supporting vaccinations, they include signs promoting loony right-wing conspiracy theories, they have bullied and harassed Ottawa citizens who are wearing masks – following them and demanding they take their masks off. They have threatened health care workers. Supporters of the protesters say that most are peaceful — but the racist, bullying element has been tolerated. In fact, the instigators and leaders of the protest include people with a long history of attachment to neo-nazi and white supremacist movements. It is so bad that when people have complained to the Ottawa police, the police have told them they should avoid wearing masks outside, and not to wear clothing identifying themselves as health care workers, in order to not provoke the protesters. There is significant support for the protests from some police and military.

WHO LEADS AND SUPPORTS THE PROTESTERS?

The leaders of the protest convoy are not from the trucking industry for the most part, but from the right wing of the Conservative Party, the even further right-wing Peoples Party (Maxime Bernier, Brian Peckford), white supremacists, Western Canadian separatists (Maverick Party). They are anti-worker and anti-immigrant. They have attracted the support of Elon Musk, Rick DiSantis, Donald Trump, Ted Cruz. Is this who you want to stand with?

The Canadian Labour Congress, the central labour body in Canada, the Teamsters Union, and many other unions have pointed out the anti-worker, racist, right-wing politics behind the protests. Many Indigenous groups in Canada have done the same. I think that is who we should be standing with, not the right-wing protesters.

“This weekend, we stood together in solidarity with the incredible health professionals who organized the event to support public health, science, democracy, equity and our public hospital staff and patients as the anti-public health convoy came to Toronto.”

Statement from the Public Service Alliance of Canada (215,000 members across Canada)

Saturday, February 12 at 1PM, there will be a rally of unionists and community activists in solidarity with frontline workers and Ottawa residents affected by the occupation. It is co-sponsored by the PSAC and Free Transit Ottawa and will be held in Lansdowne Park, behind Aberdeen Pavilion in Ottawa.