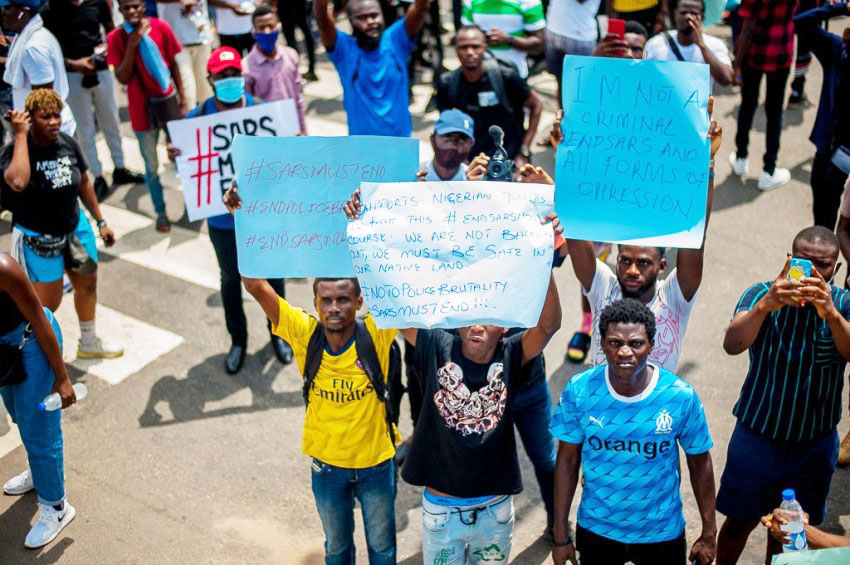 BLACK LIVES MATTER (BLM) leaders from many U.S. organizations and alliances have expressed strong support for Nigerian students and working people in their #EndSARS protests against state violence.

More than 69 civilians were shot dead on October 20–21. Twelve people were killed in the Nigerian capital Lagos and 57 in other cities.

Nigerian president Muhammad Buhari said the security forces were responding to “hooliganism,” and used “extreme restraint.” He called the protesters “thugs” and criminals.

Protests against the shootings in Lagos took place in many U.S. cities. Nigerians gathered in front of the Maryland home of Sylvanius Adiewere Nsofor, Nigeria’s Ambassador to the United States, to condemn the assault on the peaceful march.

“Soldiers clearly had one intention — to kill without consequences.”

Reflecting the internationalism of the BLM leadership, based on human rights and democratic Pan Africanism, various BLM movement organizations gave total support to the anti-police protesters in a statement released on October 23.

“As Black Lives Matter, we recognize and affirm the sanctity of all Black lives everywhere in the world.”

“Following the murder of an unarmed civilian by the Special Anti-Robbery Squad (SARS) unit of the Nigerian police, young people across Nigeria have held protests denouncing years of brutality, torture, abductions and killings.

“The demonstrations mark one of the largest Nigerian protest movements in generations.

“Colonialism, imperialism, capitalism, anti-Blackness, and other forms of white supremacy kill Black people across the globe.

“The BLM movement therefore recognizes the interconnectedness of our struggles as people of African descent across the world. Black international and pan-Africanist solidarity is central to the global BLM movement.

“There is a global movement for Black lives afoot. From the protestors in Cameroon who faced down water cannon and tear gas, to the fierce women in Namibia demanding #Shutitalldown, to the brave Zimbabweans campaigning for the release of Takudzwa Ngadziore, we will not be silenced, and we cannot be stopped.

“The call for Black lives to matter is a rallying cry for all Black lives striving for liberation.

“We stand against all violence inflicted on Black communities.

“We stand in solidarity with the brave Nigerians who were gunned down by security forces while exercising their right to protest. We stand in support of every Nigerian who has raised their voice against police brutality, and to disband the SARS unit.

“We call on our supporters to amplify the voices of Nigerians on the ground and join solidarity protests taking place in your local community and across the world.”

A statement released by the more left-leaning Movement For Black Lives said: “We join others around the world in demanding the Nigerian government end the attack on protesters and we call for justice for those who have been injured and killed by all Nigerian forces.

“We also echo the demands of our Nigerian siblings and demand: the immediate and permanent dissolution of the Special Anti-Robbery Squad (SARS); justice for all those who have been killed by SARS officials; and the end of profiling by Nigerian law enforcement agencies.

“We know that in a world where harm from law enforcement still reigns, and the vestiges of colonialism are still palpable, we must stand together while calling for an end to the very systems that are responsible for our suffering.

“It is with this understanding that we condemn the current atrocities in Nigeria and recommit ourselves to a transnational struggle for a more just, peaceful, and sustainable world.

“We are one movement, one people, and we stand with the people of Nigeria.”

A broad alliance of community groups and leaders held a successful online People’s Tribunal and Congress on October 17-18.

Live-streamed over eight hours, it included local leaders from across the United States and other countries, including Brazil, where a growing Black movement is fighting the impact of the global pandemic.

US Link to Violence

The Black Alliance for Peace (BAP), formed in 2017, is led by the 2016 Green Party vice presidential candidate Ajamu Baraka, who is its organizer and spokesperson.

BAP’s US Out of Africa Network (USOAN) released a joint solidarity statement with Pan-African Community Action (PACA) on October 20 condemning the “illegal police and military violence” against “unarmed, peaceful protesters” in Nigeria.

The groups also drew attention to the U.S. connection to the violence: “The Nigerian police forces and military have long histories with the US through the US-led International Police Training School and the military-to-military relations between US and Nigerian militaries, a part of the US Africa Command (AFRICOM).

“Nigeria’s relationship to the US and its military to military relationship with … AFRICOM must be seen as indirectly, if not directly, culpable for the October 20 massacre of unarmed protesters.”

“The US is not a benevolent power,” said BAP’s USOAN coordinator Tunde Osazua.

“When the US extends police training and establishes military-to-military relations, it is not doing so out of any commitment to democracy and human rights, but out of self-interest. It provides assistance to those governments that are aligned in upholding the interests of the US and the other colonial powers.”

Nigerian Americans and others have held solidarity protests. The political support from BLM shows the importance of international solidity in a world dominated by dictators and those backed by the US government and military.

The freedom struggle in Africa is not racially-based. It is between oppressed and exploited people against their own ruling class. It is against regimes that “racially” are the same but economically and politically align with the repressive policies and methods of the former colonial and imperialist masters.

Malcolm X and Martin Luther King are seen as heroes by African Americans and resistance fighters in Africa. The national struggles for freedom are complementary.

Pan-Africanism is the ideology that peoples of African descent have common interests and should be unified.

It is historically strong in the US. Political Pan-Africanism dates back to and is rooted in the anti-slave revolts and the Back to Africa movement, during the era of legal segregation. The creation of a unique oppressed Black nationality occurred in this period, when the demand of self-determination was raised to end oppression by the white-dominated capitalist state.

Black Americans saw the “motherland” of Africa as a beacon of hope, as the revolutionary struggles against colonial rule led to independence in some countries in the 1950s and 60s.

That solidarity and identification with Africa, moreover, was with the oppressed and exploited workers, peasants and youth against the neocolonial capitalist regimes and military dictators.

Nigeria is the most populous country (206 million) in Africa. It has been ruled by the military for most of its period of independence, since 1960.

The #EndSARS revolt today could lead to fundamental democratic change in Nigeria and across the continent.