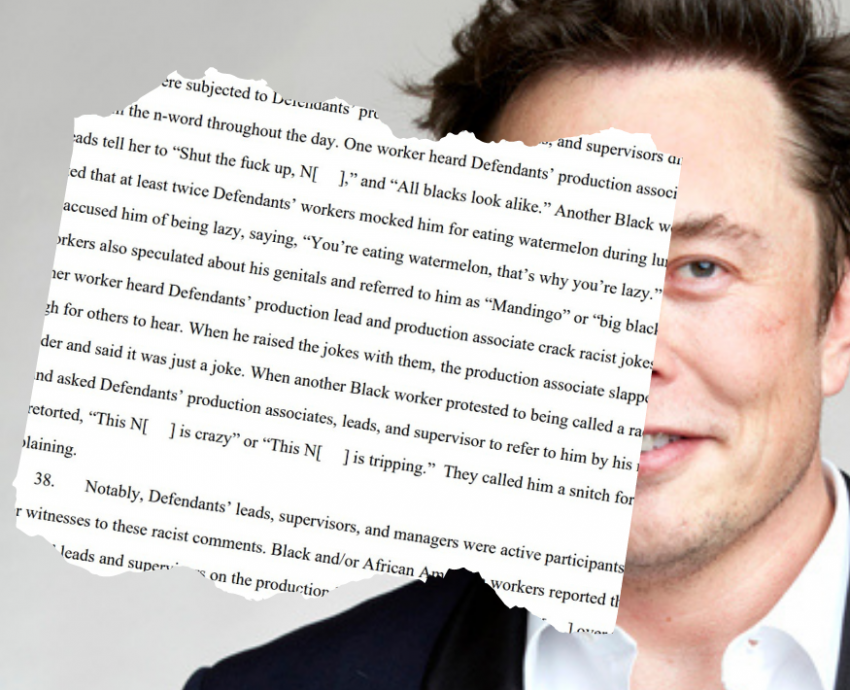 CALIFORNIA’S DEPARTMENT OF Fair Employment and Housing (DFEH) filed a lawsuit against Tesla Inc on February 9, accusing the company of entrenched racism in its Californian factory.

The DFEH’s lawsuit is a powerful indictment of racism at Tesla. Filed on behalf of more than 4000 former and current Black employees, the lawsuit makes 13 legal claims that Black workers experience ongoing racial harassment, including slurs and intimidation, and workplace segregation into the lowest level roles.

According to the DFEH, Black Tesla workers are forced to take on more physically demanding work, are denied promotions, and paid less. Black workers are the target of severe disciplinary practices, such as undue termination due to their race, and constructive dismissal is prevalent.

“Black workers are also forced to waive rights, forums, and/or procedures as a condition of employment, continued employment, or the receipt of any employment-related benefit in violation,” the lawsuit states.

The DFEH has evidence that “Tesla production leads, supervisors and managers constantly use the n-word and other racial slurs to refer to Black workers.” Shockingly, the DFEH found that “swastikas, ‘KKK’ the n-word, and other racist writing are etched onto walls of restrooms, restroom stalls, lunch tables, and even factory machinery.”

The lawsuit provides one of the most extensive documentations of a racial discrimination case in recent memory.

Tesla, unsurprisingly, claims the lawsuit is “misguided” and that it does not tolerate racial harassment or discrimination at its factories. Tesla CEO Elon Musk, the world’s richest man (who’s now moving to buy Twitter), defends the company’s working environment. Musk told Tesla workers to be “thick-skinned” about racial harassment, and “accept apologies.”

But the DFEH says that Tesla not only failed to prevent racism and discrimination, but also failed to lawfully deal with workers’ complaints of racial discrimination. Black workers faced retaliation and censorship after making formal complaints, and Tesla failed to keep records of racist incidents.

The company has been accused of using “the same tactic” to counter other complaints by Black workers, including a case brought by a Black elevator operator last year. A federal jury awarded that worker US$137 million after finding Tesla turned a blind eye to racial taunts and offensive graffiti.

Interviews with fired Black workers at Tesla published in the Los Angeles Times, provide shocking insights into their conditions.

One single parent said she was sacked after complaining that Black workers were “frequently called the N-word on the assembly line.” Another worker said she and other Black workers were assigned “to the most arduous tasks in a corner of the factory co-workers called ‘the plantation.” An Army veteran was fired after he complained that his boss called him and two Black co-workers “monkeys.”

Monica Chatman — a single mother — worked compulsory 12-hour shifts, six or seven days a week. “There was a time,” she explained, “where I worked three months straight — no days off.” Tesla is “modern-day slavery,” she said. “And we are the crabs in the barrel.”

As months passed, Chatman trained new workers and but saw them promoted over her. “I was blackballed,” she said, and that she and other Black workers were segregated in “the nastiest, most uncomfortable area” of the factory where it was “freezing cold” in winter.

When Musk visited the factory to address workers, Chatman said Latino colleagues were left up front while Black workers were moved to the back.

Musk is totally aware of the racism, and has the financial wealth to pay and treat his workforce fairly.

Musk was born in Pretoria, South Africa in 1971 and left for Canada at age 18 to avoid mandatory military conscription. Musk later moved to Silicon Valley to start his tech businesses, including Space X and Tesla.

Musk grew up under the apartheid system where whites ruled with brutality, but pretends he knows little about racism and legal segregation. He has never publicly denounced apartheid or segregation.

Musk is now a naturalized citizen of the United States, which has its own long history of legal racial discrimination. Congress only outlawed lynching this year, after more than 100 years of failing to do so despite 200 proposed laws.

The attitude of Tesla’s management towards Black people is not a surprise to those of us who fight that system. Musk receives all the advantages of belonging to the white dominant “racial” group in both South Africa and the United States. He doesn’t care who pays the price.

The Fremont car factory was once a union stronghold when it was owned by GM and later jointly by GM and Toyota. The United Auto Workers (UAW) administration caucus ran the union.

Once Tesla bought the plant the UAW did not seriously attempt to unionize it. Thus Musk had a free hand to impose racist and anti-union practices, which he did.

African American workers — the lawsuit plaintiffs — have made a series of claims against Tesla, including for compensatory and punitive damages; economic damages and equitable relief, including but not limited to reinstatement and/or front pay, pay adjustments, back-pay; lost wages and benefits including base pay, incentive pay, pension benefits and awards.

The suit is important for Tesla’s Black victims, and also opens the door to a future union drive based on the unity of Black, brown and white workers.