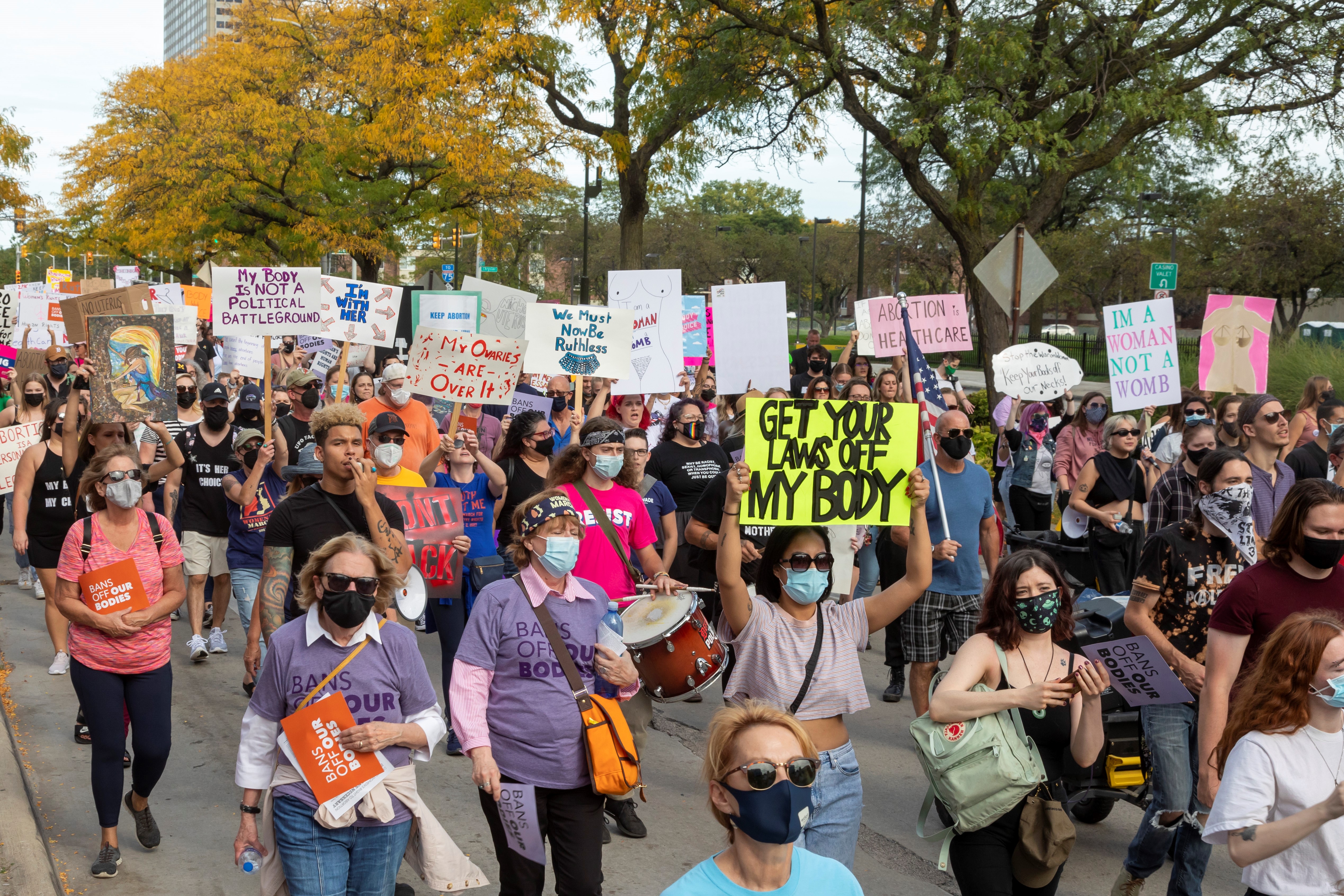 October 2021 Detroit rally and march for the right to legal abortion. It was one of hundreds of rallies across the country two days before the Supreme Court began its new term, where Roe v. Wade is on the chopping block. www.jimwestphoto.com

Second wave feminism was never a single-issue movement. It called for free and accessible abortion along with quality child care and equal pay for equal work. It exposed society’s violence as it pulled back the curtain on domestic abuse and date rape. Shui-yin Sharon Yam reminds us that the Roe v. Wade decision, which asserted that medical personnel can aid the pregnant person seeking abortion, will soon be overturned by the Supreme Court. She discusses how we can best defend the bodily autonomy of pregnant people in this new era.—The editors

SINCE THE DRAFT Supreme Court judgment to overturn Roe v. Wade was leaked, reproductive rights activists have been rallying around legal access to safe abortion.

In mainstream public discourse, the controversy surrounding abortion care is often simplified into binaries: “pro-choice” or “pro-life.” Both those terms, however, are misnomers that obscure the fight towards a more expansive and intersectional vision of reproductive justice. The potential overturning of Roe v. Wade creates a rupture — one that reproductive justice activists can and must harness to shape the future of bodily autonomy and reproductive freedom for all.

As debates and advocacy around abortion access and reproductive care more broadly intensifies, it is important for us, now more than ever, to sharpen the language we use to describe the ideological contour of reproductive politics, and the vision we are fighting for.

The Limitations of Choice

While Roe v. Wade has allowed many people to access legal abortion, the ruling has always been based on the concept of individual choice, rather than rights or justice. To put differently, Roe legalizes abortion on the basis that as a reproductive decision, it belongs to the individual’s “zone of privacy,” where the government cannot intrude upon.

The choice paradigm has been widely criticized by feminist scholars and reproductive justice activists as sorely insufficient: predicated on an individualist, consumerist and capitalist framework, only those who already have access to resources can engage in free choice. In other words, the pro-choice framework and language fails to consider the hardships marginalized people — such as poor women of color — experience as they seek abortion care.

It is important to remember that the choice paradigm has not always been the defining framework for abortion rights advocates.

Historian Rickie Solinger points out that in the late 1960s to early 1970s, advocates for legal abortion largely used the term rights to describe access to safe abortion. However, in order to make the movement more palatable to the mainstream public, advocates began deploying the language of choice that was more aligned with the dominant capitalist discourse on individual consumption and decision.

Furthermore, some pro-choice strategists chose to focus on abortion as a negative, rather than, right: in other words, as an act that should be free from government interference, but not as one that warrants active support and resources from the state. This strategy created situations in which marginalized individuals have difficulties finding abortion providers and clinics that are easily accessible.

While an argument that focuses on freedom from government interference was useful in garnering the support of libertarian voters who sought to protect their privacy from “big government,” it has significantly limited the scope of the abortion rights movement.

First, the same libertarian argument can be used to justify anti-abortion policies, such as the Hyde Amendment that denies federal funding for abortion services. Second, freedom from interference in a capitalist market does not guarantee equal access to safe abortion for all.

As Solinger argues, only middle-class white women, who are deemed legitimate by the state and the public, have the right to choose. As Monica Simpson, the executive director of SisterSong Women of Color Reproductive Justice Collective, pens, “To be pro-choice, you must have the privilege of having choices.”

Indeed, many reproductive justice activists and scholars have pointed out that poor women of color and trans people are not granted the same reproductive choices because many of them lack access to appropriate healthcare. Even while Roe is still in place, increased legal restrictions on abortion and the Hyde Amendment have rendered it extremely difficult for marginalized people to afford and access legal abortion.

The pro-choice framework, in other words, fails to consider the lives of marginalized people who do not have resources to exercise choice the same way middle-upper class cis white women do.

By individualizing abortion access as a consumerist choice that should be free from government interference, the pro-choice framework and language obscures intersecting patterns of injustices. As reproductive justice activists, such as Loretta Ross, have repeatedly observed, one’s reproductive decision to have or not have children is always embedded within a complex web of political and social power dynamics.

While a choice discourse focuses only on whether one has the choice to access abortion to discontinue a pregnancy, a reproductive justice framework is concerned with a more expansive set of questions: Can the pregnant person afford and access abortion care that is affirming? Is the pregnant person seeking abortion because they otherwise would not have the resources to raise the child?

If so, what social services and resources does this person need in order to have the child and parent in a safe environment? Does the pregnant person and their community have access to non-coercive contraceptives and comprehensive sex education?

If the person cannot access abortion, what health risks will they experience during pregnancy and birth, especially given the horrendous racial disparities in maternal health outcome in the United States? Put simply, the choice paradigm is sorely insufficient in addressing the sociopolitical webs that lead to systemic reproductive injustice.

Whose Life is Protected?

Despite its current insufficiency in protecting people’s right to abortion, the overturning of Roe v. Wade will only compound existing injustices and marginalization.

Reproductive justice scholars and activists have already warned that if Roe is struck down, poor people of color will be hit the hardest as they are most likely to face criminalization, financial barriers, and negative health outcomes under the current system.

Hence, at this critical juncture, we can no longer be satisfied by the limiting pro-choice narrative. Rather, we must organize through a reproductive justice framework that sees reproductive oppression as “the result of the intersection of multiple oppressions” (Ross and Solinger 69).

While Roe has yet to be overturned, many states have already passed restrictive laws on abortion — most notoriously S.B. 8 in Texas, which bans abortions in almost all circumstances, and criminalizes anyone who “aids or abets” in the performance of a prohibited abortion.

In addition to abortion bans, some states have also criminalized pregnancy outcomes through feticide laws: pregnant people, most of them women of color, have been charged for mental illness, addiction, and accidents (including accidentally falling down the stairs, and being shot in the stomach) which resulted in a miscarriage. While proponents of these polices often claim to be pro-life, this label eclipses the lives of many marginalized people who are harmed by the criminalization of abortion.

Attuned to the intersectionality of oppressions, identities and power relations, reproductive justice is a coalitional framework that demands activists to organize with different social justice movements to achieve bodily autonomy and reproductive freedom for all.

In addition to abortion access, hence, the criminalization and incarceration of people of color under abortion bans is also an urgent matter of reproductive justice.

Due to social injustices—such as poverty, lack of access to reproductive healthcare and education, and sexual violence—the abortion rate for Black women is about five times that for white women, and 60% of people obtaining abortions are people of color.

Rather than providing needed resources and support to prevent unwanted pregnancies among communities of color, abortion bans criminalize individuals who are often already deemed delinquent or sexually deviant. Past studies have already shown that increased criminalization tends to disproportionately affect people of color.

If Roe is overturned, abortion will become illegal in many states that have a high proportion of people of color who seek abortions. In other words, it will inevitably lead to the criminalization and incarceration of poor women and people of color.

Reproductive justice scholars have argued that incarceration and criminalization is a key driver of reproductive oppression because incarcerated people do not possess bodily autonomy and cannot exercise their right to have children. The U.S. criminal justice system has had a long history of deploying coercive contraception and sterilization on incarcerated people.

The connection between reproductive injustice and the criminal justice system does not fit into the pro-choice framework, as it reveals that reproductive decisions are not the matter of individual choice, but rather, the matter systemic and political injustice. Only through the more expansive and intersectional lens of reproductive justice can we see the need to build coalitions across the prison abolition movement and the movement for abortion rights.

Abolitionists have argued that the prison industrial complex and criminalization lead to social death as incarcerated people — particularly people of color — lose their civil liberties, political rights, and bodily autonomy.

Ironically, under the “pro-life” banner are many marginalized people and communities who are facing imminent persecution and social death. By demanding criminal justice interventions in reproductive issues, “pro-life” advocates make clear that they do not see the lives of marginalized people of color as worthy of protection.

As Andrea Smith points out, the “pro-life” position does not so much express a commitment to life, “but rather a commitment to criminal justice interventions in reproductive justice issues” (123). Through the intersectional lens of the reproductive justice framework, we can more clearly articulate the incongruence and contradictions in the “pro-life” position.

Beyond the criminalization of abortions and miscarriages, “pro-life” arguments also omit the fact that carrying a pregnancy to term and birthing a child is statistically much riskier than terminating a pregnancy.

Due to obstetric racism, Black women, even after controlling for social class and education level, are still three to five times more likely to die in childbirth than white women. By forcing people to give birth, abortion bans and the overturning of Roe renders the life of Black women disposable.

Towards Reproductive Freedom for All

The leaked Supreme Court judgment on Roe has galvanized the public to protect the right to legal abortion. As reproductive justice activists, however, we should not stop short of organizing a more expansive, inclusive, and intersectional movement. The “pro-choice” vs. “pro-life” framework and language is not only reductive, but it is actively harmful to marginalized people of color, whose experiences are often not considered by either side.

The reproductive justice framework allows for a more cogent analysis and articulation of how different sociopolitical issues contribute to reproductive injustice. Now more than ever, we need an organizing framework that promotes coalition building because abortion access — and reproductive freedom more broadly — cannot be separated from other political forces that render lives unlivable for so many.