Grand Army of Labor: Workers, Veterans, and the Meaning of the Civil War
By Matthew Stanley
University of Illinois Press, 2021, 320 pages, $30 paperback. 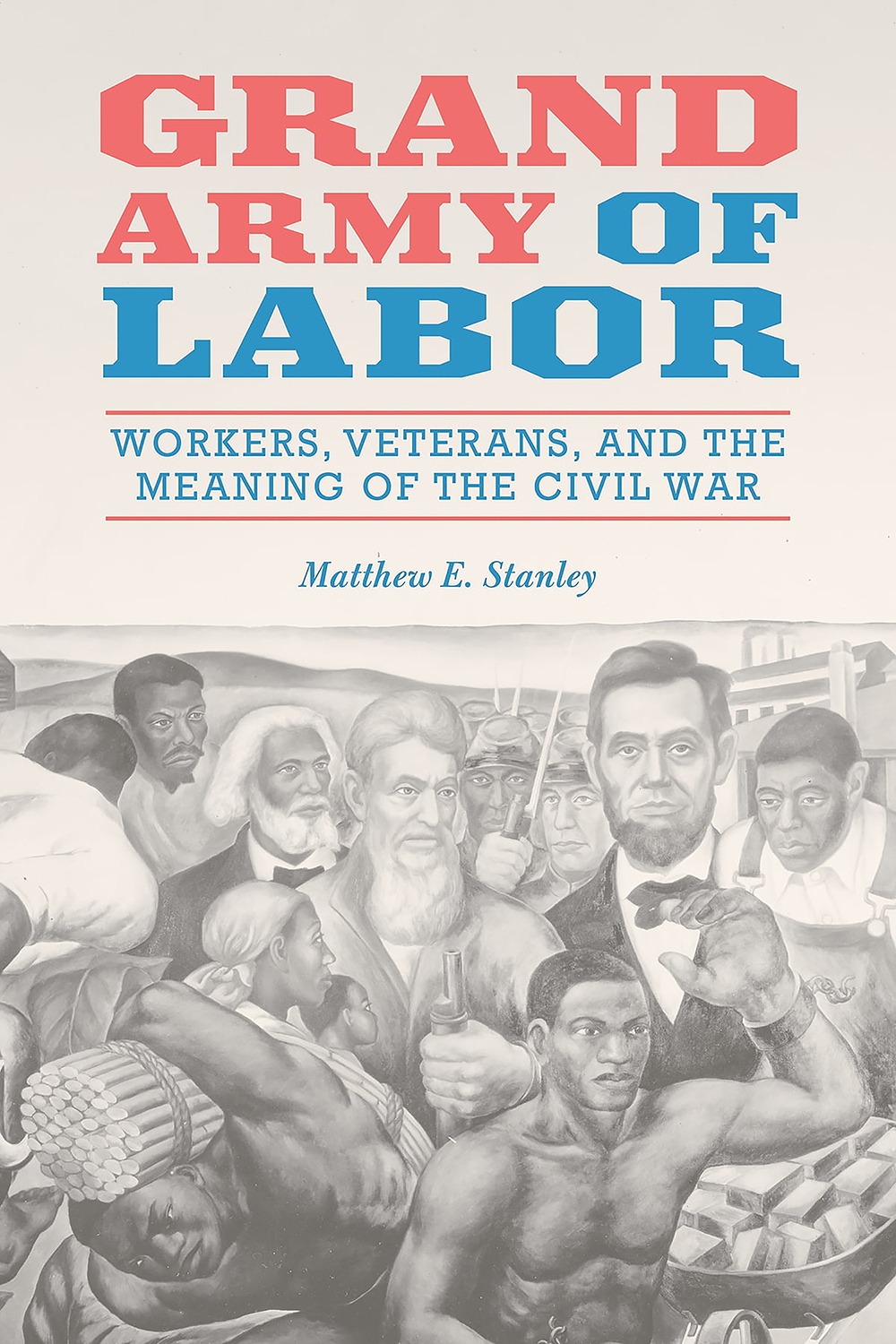 IN 2005 PAUL Rieckhoff, an Iraq war veteran who co-founded Iraq and Afghanistan Veterans of America (IAVA) penned a memoir about his military service and involvement in U.S. politics afterwards. He denounced the entire “generation of politicians currently in power” who, in his view, had “failed America’s veterans and the American people.”

Criticizing the shortcomings of both major parties, Rieckhoff argued that “only veterans have the credibility to reach across party lines and represent all Americans.” What the country needed, he argued was a “populist political movement that challenges the status quo in America and propels veterans into Congress for decades to come.”

Events have not played as Rieckhoff hoped or predicted. Veterans of America’s post-9/11 wars who have run for public office, playing up their military credentials, have not generally been a positive force.

Almost all have run as conservative Republicans or corporate Democrats, as part of a concerted effort by both major parties to recruit and finance more so-called “service candidates.” Regardless of their gender or race, most are college-educated former officers with good political connections and affluent donors.

Even after Donald Trump’s 2020 defeat, more than two-thirds of the veterans in Congress are still Republicans; 35 of them voted against certifying Joe Biden as his successor.

The GOP veterans’ caucus includes such luminaries as Harvard-graduate Tom Cotton, the senator from Arkansas who urged Trump to deploy federal troops during 2020 Black Lives Matters protests and give “no quarter for insurrectionists, anarchists, rioters, and looters.”

On the House side, former Navy SEAL Dan Crenshaw, a critic of “wokeness” in Biden’s Department of Defense, was among 36 veterans and current members of the National Guard or Reserves to vote against expanding eligibility for post-9/11 GI bill benefits to fellow members of the Guard and Reserves.

When veterans with far better politics or working-class backgrounds run for state or federal office, their handicaps include not having the elite connections which facilitate fund-raising or even the ability to take time off from work to campaign. Choosing to run as third-party candidates puts them at the additional risk of being marginalized in the media, beset by ballot access problems, or denounced as “spoilers.”

In 2020, for example, the Green Party national ticket was composed of two military veterans, Howie Hawkins and Angela Walker. Their low-budget anti-imperialist campaign was largely ignored amid a $6.6 billion spending war between backers of Joe Biden and Donald Trump.

In neighboring Virginia, Lee Carter, a member of Democratic Socialists of America who also served in the Marines, did win election to the state legislature after being inspired by Bernie Sanders. Carter was also motivated by his personal difficulty, as a blue-collar worker, in qualifying for state workers comp benefits after being injured on the job.

In Richmond, Carter rocked the boat by introducing legislation to raise the minimum wage for airport workers (which passed) and repeal Virginia’s right-to-work law (which did not). In 2021, he waged a long-shot campaign for the Democratic nomination for governor. After placing fifth in a field of five, he lost a primary race to return to the House of Delegates, after which he retired from electoral politics at age 34.

Richard Ojeda, a fiery former Army paratrooper, became a tribune of the working class in West Virginia after he was elected state senator from Logan County. In 2018 he was a leading public supporter of the 25,000 public school teachers who staged a militant statewide walkout.

Later that year he ran for Congress against an incumbent Republican, after winning a primary victory over a centrist Democrat backed by the state party leadership. In the general election, the Democratic National Committee offered little fundraising help because the Ojeda didn’t fit the party’s preferred service candidate profile (despite demonstrating considerable populist appeal to disillusioned former Trump voters, of whom he was one).

She won 35% of the Democratic primary vote by highlighting Carper’s coziness with the banking industry and vote in favor of the Iraq War. As Harris declared on the campaign trail, “Democrats need to say, ‘This war was our mistake, and we need to fix it.’ We need to say ‘We are going to pull back.’ We need to say . . . we will not go blindly into another conflict that risks our working-class children.”

Grand Army of the Republic

Matthew Stanley’s Grand Army of Labor provides a timely reminder that such dissenting voices once had greater resonance. When veterans of a Civil War — that was not a “mistake,” but a necessary crusade against a slave-holding aristocracy — entered U.S. politics in the late 19th century, they were far more ideologically diverse and labor oriented than their modern-day counterparts.

As Stanley shows, the largely working-class veterans of Abraham Lincoln’s Grand Army of the Republic (GAR) were, for a generation after the Civil War, the nation’s largest and most influential voting bloc.

A significant fraction of those ex-“citizen soldiers” strongly supported postwar efforts to challenge the Democrats and Republicans through anti-corporate third-party formations like the Greenback-Labor and People’s Parties, and later the Socialist Party of America.

In many Gilded Age battles against “wage slavery,” labor radicals appealed to Union army veterans based on their past involvement in the destruction of chattel slavery in the South.

“Agitators framed post-war disputes over land and labor as part of an anti-slavery tradition…Workers built on the praxis of antebellum activists who sought to expand the meaning of freedom—abolitionists, trade unionists, suffragists, land reformers, and utopian socialists—as well as those of rights demanding freedpeople.” (18)

As Stanley shows, even some radicalized former recruits to the Confederacy — most famously Albert Parsons, the Haymarket Martyr from Texas who became a leading anarchist in Chicago — played the veteran card in their post-Civil War labor and political organizing. These efforts included courageous but ultimately failed attempts to build inter-racial political coalitions in the South, during Reconstruction and afterwards.

In Stanley’s view, the “organized labor factions and individuals who did fight on antiracist terms, attempting to unify the class by challenging rather than promoting gender and racial discrimination, tended to be drowned out, not merely by the interpersonal racism of white workers but also by the dominant ideas regarding race and gender that were broadcast and stoked through every channel of the white capitalist power structure.”

In addition, recasting the GAR as a “Grand Army of Labor” became more difficult rhetorically, after 60,000 federal troops were deployed, not to free slaves or defend Reconstruction but to help suppress general strike activity in 1877.

More than a million workers, in ten northern states, participated in this “Great Upheaval,” including “tens of thousands of Union veterans on both sides of the barricades.” In the aftermath of this conflict, which claimed 100 lives, both Democrats and conservative Republicans backed further use of the U.S. Army and a strengthened National Guard “to forcefully check future worker uprisings in the name of ‘domestic security.”

Nevertheless, as Parsons observed, “the events of 1877 gave a great impulse and activity to the labor movement all over the United States and, in fact, the whole world.”

One political expression of this, three years after the Great Upheaval, was the Greenback-Labor Party (GLP) presidential campaign of James Beard Weaver, a combat veteran and former Union army colonel. It pitted him against two other former soldiers running on the national Democrat and Republican tickets.

According to Stanley, “the ability of ex-Confederates and Unionists, including African-Americans, to bridge wartime divides along class lines became the centerpiece of Weaver’s 1880 campaign.”

A disaffected Radical Republican, Weaver had previously been elected to Congress, with 12 other GLP members, who similarly favored “a new anti-slavery movement rooted in the material interests and cultural identities of workers and small-scale farmers.” Although Weaver won only 3.3% of the popular vote, the GLP’s “appeals to interracial politics would influence later farmer-labor campaigns” and its “social and leadership networks would prove integral to the Populist movement of the 1990s.”

Meanwhile, the Knights of Labor was emerging as another embodiment of what Stanley calls “the worker-veteran refashioning of ‘anti-slavery.’” As part of its reform platform, the Knights touted state-run Old Soldiers’ Homes as models for social housing needed for non-veterans, of all races, when these “soldiers of construction” were no longer physically able to work.

In 1885 a group of Union and Confederate veterans created the “Blue and Gray of the Knights of Labor.” Under the slogan “Capital Divided, Labor Unites Us,” their postwar mission was to “re-unite those who were arrayed against each other on the field of battle” but now had a common working-class interest in achieving industrial freedom through labor militancy.”

In this fashion, the Knights tried to “craft a sense of brotherhood among old soldiers in support of the eight-hour movement.”

In its later campaigning for other social benefits and labor protections, the Socialist Party similarly argued that “soldiers of industry” needed their own system of old age annuities and workers’ compensation when they became casualties of dangerous and unhealthy working conditions.

This association of “military veteranhood with industrial veteranhood” was no exaggeration at the turn of the century.

As one socialist noted at the time, “the number of wage earners killed and maimed every year on the railroads, in the mines and factories is approximately equal to the number of soldiers killed and wounded in any one year of our great civil war, with all its terrible battles.”

A hundred years after the Civil War, when the ranks of labor included many veterans of the draft-driven “citizen armies” that waged good wars or bad, from World War II to Vietnam, other former soldiers became catalysts for change in several high-hazard industries.

Among the leaders of the grassroots movement for black lung benefits in West Virginia was Arnold Miller, a disabled miner who was previously injured, as a combat infantryman, during the D-Day landing in 1944.

Miller ran for president of the United Mine Workers in 1972, as part of the Miners for Democracy (MFD) slate that also included Harry Patrick, who served in the Navy during the Korean War.

The MFD’s victory over a murderous and corrupt union leadership was propelled in part by the workplace militancy of recently returned Vietnam veterans. Among them was current UMW President Cecil Roberts, who continues to rally union members and their families against a resurgence of lung disease due to coal and silica dust exposure among underground miners.

In the 1970s and ’80s the late Tony Mazzocchi, a survivor of the Battle of the Bulge, became a visionary leader of the Oil, Chemical, and Atomic Workers (OCAW), who also worked in extremely dangerous jobs.

After battling powerful OCAW employers, Mazzocchi became a key architect of labor’s campaign for the federal Occupational Safety and Health Act of 1970, which now provides workplace protections for 130 million Americans.

Following that historic achievement, Mazzocchi tried, as a founder of the Labor Party in the 1990s, to popularize the now-widespread demand for more affordable higher education. Mazzocchi’s inspiration for that initiative was the liberating experience of other working-class veterans from his World War II generation, who were able to attend college in the late 1940s as a result of the original GI Bill, which he regarded as “one of the most revolutionary pieces of legislation in the 20th century.”

Unfortunately Mazzocchi’s late 20th century attempt to build a lasting labor-based political formation, independent of the two major parties, encountered many of the same systemic obstacles faced, but not overcome, by veterans who become third-party backers and political candidates a century before, after their service in the Civil War.

As Matthew Stanley shows, the foot-soldiers in that “Grand Army of Labor” lost many of their initial electoral battles. Yet their pioneering efforts ultimately succeeded, in popularizing the idea that veterans’ benefits were a good working model for more expansive social welfare programs benefiting all U.S. workers and their families.