Red Round Globe Burning:
A Tale at the Crossroads of Commons and Closure, of Love and Terror, of Race and Class, and of Kate and Ned Despard
By Peter Linebaugh
Berkeley: University of California Press, 2019, 486 pages, $26.95 paperback. 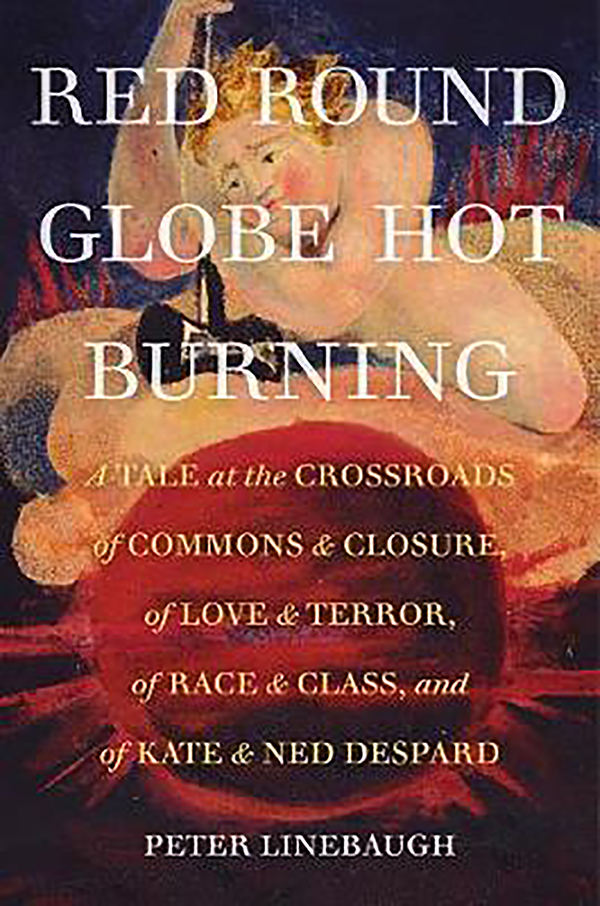 PETER LINEBAUGH’s LATEST work Red Round Globe Hot Burning, arrived — as the title might suggest — as if in anticipation of a world in revolt against racist police violence and ecological crisis.

At the center of his text, Linebaugh has written us a love story of sorts. It involves the romance of Edward (Ned) and Catherine (Kate) Despard — the former an Irish revolutionary, the latter a Black woman from Jamaica.

Running through this romance, Linebaugh discloses entangled histories: of the rural poor in England defending common lands; of Haitians overturning slavery; of Irish republicans taking up arms against colonialism; of Indigenous North Americans fighting for their lands; of ecologists documenting the effects of coal, soot, and poisoned air on the laboring poor.

These, Linebaugh instructs, are our predecessors, the trailblazers who fought to free the world of oppression. Edward Despard went to the English gallows in 1803 for his commitment to ending British colonialism in Ireland. Kate organized relentlessly to save him; she wrote his gallows speech with him; and she sought to preserve his — their — legacy after his death.

Now Peter Linebaugh has taken up the work of elaborating that legacy for radicals today. It follows the path of his previous historical studies of popular freedom struggles, which include The Many-Headed Hydra: Sailors, Slaves, Commoners, and the Hidden History of the Revolutionary Atlantic (with Marcus Rediker, Verso 2013), The London Hanged: Crime and Civil Society in the Eighteenth Century (Verso 2006), and The Magna Carta Manifesto: Liberties and Commons for All (University of California Press, 2008).

At the heart of the present work, he puts the commons (communally held fields and forests that were seized by private landowners in the early phase of capitalist development — ed.) For it is the return to the principles of commoning that we urgently need today.

Yet Linebaugh is wary of some recent returns to the commons that have lost all sense of the class struggle. We need be wary, he tells us, of a politics of the commons that lacks “any notion of the working class.” (83)

He reminds us that the enclosed field, which cut off the poor from the common lands, was connected to the prison. The latter too often became the residence of those who led anti-enclosure riots, tore down hedges and fences, and reclaimed what had once belonged to all. The struggle for the commons is a serious business, as CLR James might have said, and it carries great responsibilities.

We are, in other words, on the terrain of class struggle. And Linebaugh tracks it like a riotous historian, one who embraces not just the commons but also the riots and uprisings that sought to defend it. Careful, however. Let us not assume too quickly that we know what class struggle looks like. Attend to it in all its breadth and diversity. It is a marvelous thing.

Look, Linebaugh says, at the great indigenous leader Tecumseh as he implores his followers to “level all distinctions” and “to unite in claiming a common and equal right in the land.” (398) Tecumseh’s words are alive; they speak to us of class and commons today.

Listen, he urges, to the last words of Edward Despard, co-written by his wife Kate, as he proclaims that “the principles of freedom, of humanity, and of justice will triumph over falsehood, tyranny, and delusion.” (407)

And read, he implores, the great Thomas Spence as he advocates women’s suffrage, health care for all, public granaries to feed the people, and an end to private property in land. Take inspiration from Spence’s 1795 booklet, The End of Oppression and rewrite it for our times.

That is what Peter Linebaugh is doing in this extraordinary work. He is rewriting the history of capitalism, class struggle, and the commons. He is sharing past resources. He is reviving freedom dreams.

Walter Benjamin once recommended a “constellative” method as most appropriate for historical materialists when writing history. Marxist readings of history should attend to those insurgent, out-of-joint moments in which bourgeois progress could have been disrupted and arrested.

For Benjamin, this materialist approach “brushes history against the grain,” seeking the gaps and fissures in historical time that signaled other possibilities — possibilities that are not yet closed off. Where the bourgeois standpoint flattens historical time into a seamless, linear narrative, one event following inevitably from another, historical materialism by contrast ought to be drenched in disruptive time.

In defiance of linearity, historical materialism should thus constellate moments of popular insurgence across time, connecting flashes of a world being turned upside down. The method requires a jarring and disjointed temporality, one in which discrete moments of rebellion are brought together in a disruptive counter-history.

In addition, this disruptive — indeed eruptive — history must also be anchored in the present-day struggles of the historian. As a result, a non-linear historical materialism brings together “the Then and the Now … into a constellation like a flash of lightning.” In so doing it aspires to create not a comprehensive image of history, but an explosively dialectical one.(1)

Its methods are experimental and improvisational. However much they may borrow from radical works of art, these methods seek also to recuperate the very praxis of proletarian revolution.(2)

Walter Benjamin’s dialectical protocols for an eruptive historical materialism have rarely found practitioners equal to the task. Peter Linebaugh is an outstanding exception.

Linebaugh opens Chapter 11 with yet another fragment of disruptive history. He introduces us to an anonymous 1762 letter by a band of Irish Levellers and anti-enclosure rioters, known as Whiteboys, in which they described themselves as “levellers and avengers for the wrongs done to the poor.” (121) In this fragment of resistance he finds a history of struggle for the commons.

Heed these rebels, remember them, and draw inspiration from them, urges Linebaugh. The wrongs done to the poor are yet to be avenged and reversed. Those wrongs include what was done to Kate and Ned Despard and to all their radical contemporaries. We have yet to settle our debts to them.