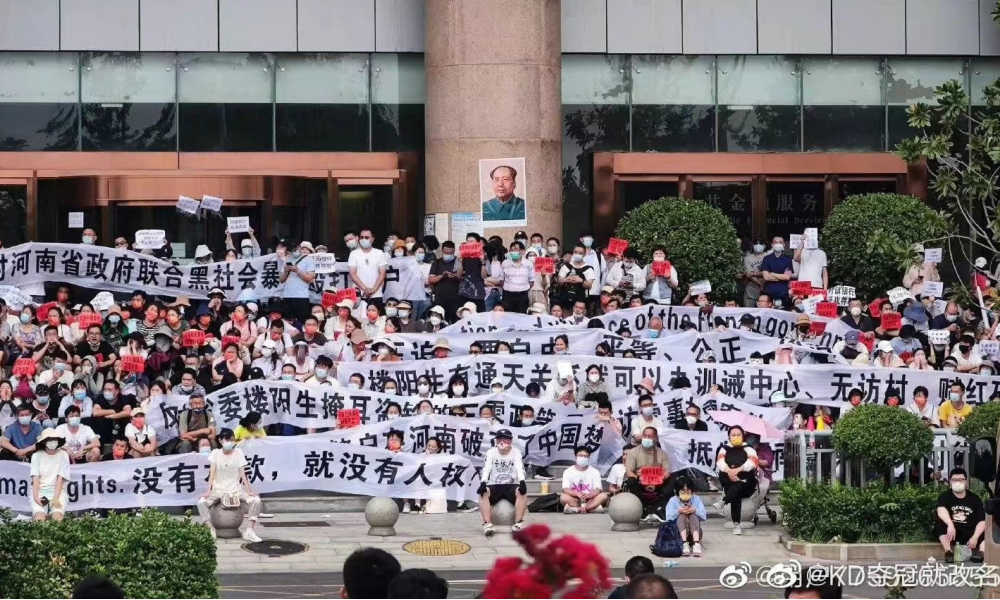 IN MID-APRIL 2022, four rural banks in Henan Province refused to allow depositors to withdraw their money. This situation was related to how China’s real estate bubble burst, with ominous economic effects rippling throughout people’s lives.

Four hundred thousand depositors have been affected, involving assets of 40 billion RMB ($6 billion US). Depositors staged protests, but as hundreds gathered in front of the central bank in Zhengzhou, they were attacked by unidentified persons. The violence produced an immediate backlash, and the rural banks quickly announced that they would reimburse “most” of the depositors.

Quite a number of Wanghong (online key opinion leaders) criticized the announcement for containing hidden clauses that might exclude some from recovering their savings. The banks might only pay those they defined “depositors” but not “investors,” who signed documents called “wealth investment products.”

Is this a Ponzi scandal with Chinese characteristics? Have banks loaned recent customers money, at high-interest rates, taken from depositors’ funds? The July 11, 2022 Bloomberg News called it the country’s “largest bank scandal.”

The online media platform ifeng.com identified the man behind the scandal as Lüyi, boss of the Xincaifu Group Investment Holding Co. The Xincaifu Group colluded with the banks’ managers to cheat the depositors’ savings before fleeing the country. Further, ifeng also revealed that Lüyi’s generous backer was the HNA Group Co., Ltd.

The story does not end here. HNA, a former state-owned enterprise, grew from an original $10 million in startup assets (1993) to a trillion-dollar empire in 2016. Its mysterious growth seems to be related to family ties with Wang Qishan, the current vice-President of China and former head of Xi Jinping’s anti-corruption campaign, and the Xi Jinping family.

The ifeng.com report was soon erased but its re-posting outside China can still be found.

The ifeng.com report mentioned that Lüyi had deep connections with the top management of not just four rural banks, but at least 26. This enabled him to easy and cheap money while buying up shares.

Rural banks have only been in existence a dozen years. They are under the jurisdiction of the China Banking and Insurance Regulatory Commission. CBIRC allows private shareholders as long as the founding member is an established commercial bank holding at least 15% of the shares. But this check on private shareholders did not prevent a serious scandal.

Coming just three years after Xi Jinping announced that his country has won an “overwhelming victory” against corruption, the Henan scandal reveals that scamming still exists and local government is an accomplice.

In fact, the local government made use of the Covid monitoring system to track down the depositors-protesters and keep them isolated at home. Then when they dared to protest, the police stand by as unidentified thugs beat up protesters. These circumstances suggest that the local governments assist corrupt banks, not the people.

This is nothing new. Local governments have long been in collusion with developers and local gangsters. They supply the developers with easy credit and have them purchase land from the owners, then use the gangsters to beat up residents who refuse to be removed from their homes.

Last year Goldman Sachs economists estimated China’s hidden local government debt had swelled to more than half the total economy. The Bloomberg News reported, “China has nearly 4,000 small and medium-sized lenders that collectively control almost $14 trillion in assets. But confidence in these banks has waned since 2019, when the government seized a lender for the first time since 1998 and imposed losses on some creditors.”

A bank run will shake up the economy. We are not there yet, but the potential risks may explain why higher authorities have intervened to roll out a compensation plan for depositors. The CBIRC also told banks to bail out struggling property developers so they can complete unfinished housing projects. It could head off the growing mortgage strikes that threaten both the economy and the social order.

While government agencies confidently predict that Beijing has the will to repair the rupture, this may result in taking over projects from heavily indebted private companies, and in turn result in industry consolidation. The CBIRC has already signaled it will strengthen its coordination in order to “guarantee the delivery of homes.” (See “China banks told to bail out property developers as mortgage boycotts threaten economy,” by Martin Farrar, The Guardian, 7/18/22)

It is widely known that control of the industries that are the commanding heights of the country is divided up among the second (or third) red generation or high-level officials and their children — and in that order as well.

This “political class” is simultaneously an economically exploiting class, who would not be content with their official salaries. Corruption provides their incentive to work as “public servants.” And this boundless appetite for money and power has become an unbearable burden for both the Chinese people and a healthy economy.

Additionally, the power struggle at the top is another destabilizing factor. If ifeng.com can dare to mention that Wang Qishan is connected to the HNA Group, the media bosses might have a political reason for allowing this to be reported.

What is clear is that the party has desfranchised people to the point of largely privatizing the state to its own benefit. And this is the main source of the social and economic chaos we are now facing.
The strict state control over the economy has led some to claim that China is not going to crash because of its debt problem. We are told that “the government can order the big four banks to exchange defaulted loans for equity stakes and forget them.”

The party-state has encouraged people to believe that the state will guarantee their economic wellbeing if they agree to give up all political rights. And since the crackdown on the 1989 democratic movement, with the encouragement from the party state, Chinese people appear to be merely economic animals who take no interest in questioning the way the party is leading the country.

But as high growth rates come to an end and coincide with an even more corrupt, hence increasingly malfunctioning bureaucracy, we should examine the economic situation against the background of this growing political crisis.

As we see significant capital flight, as homebuyers refuse to pay mortgages on unfinished homes, and as we see widespread support for “lying flat” (a passive boycott of the party’s polices in general), people are asserting their dissident perspectives en masse for the first time since 1989, even if very rudimentary and individually.

We should not forget that it was the same kind of nationwide passive boycott, go-slow and work-to-rule among workers and peasants since the fall of Lin Biao in 1971 that paved the way of the complete turn-around in the party’s “Cultural Revolution” policy after the death of Mao. Today a comparable sentiment is now beginning to spring up everywhere.

Many no longer believe the party’s promise and some are increasingly enraged by the insane level of lockdown over the Covid pandemic. It is hard to predict the future, but to imagine that the future of China just depends on its economic performance is a typical example of “economism.”