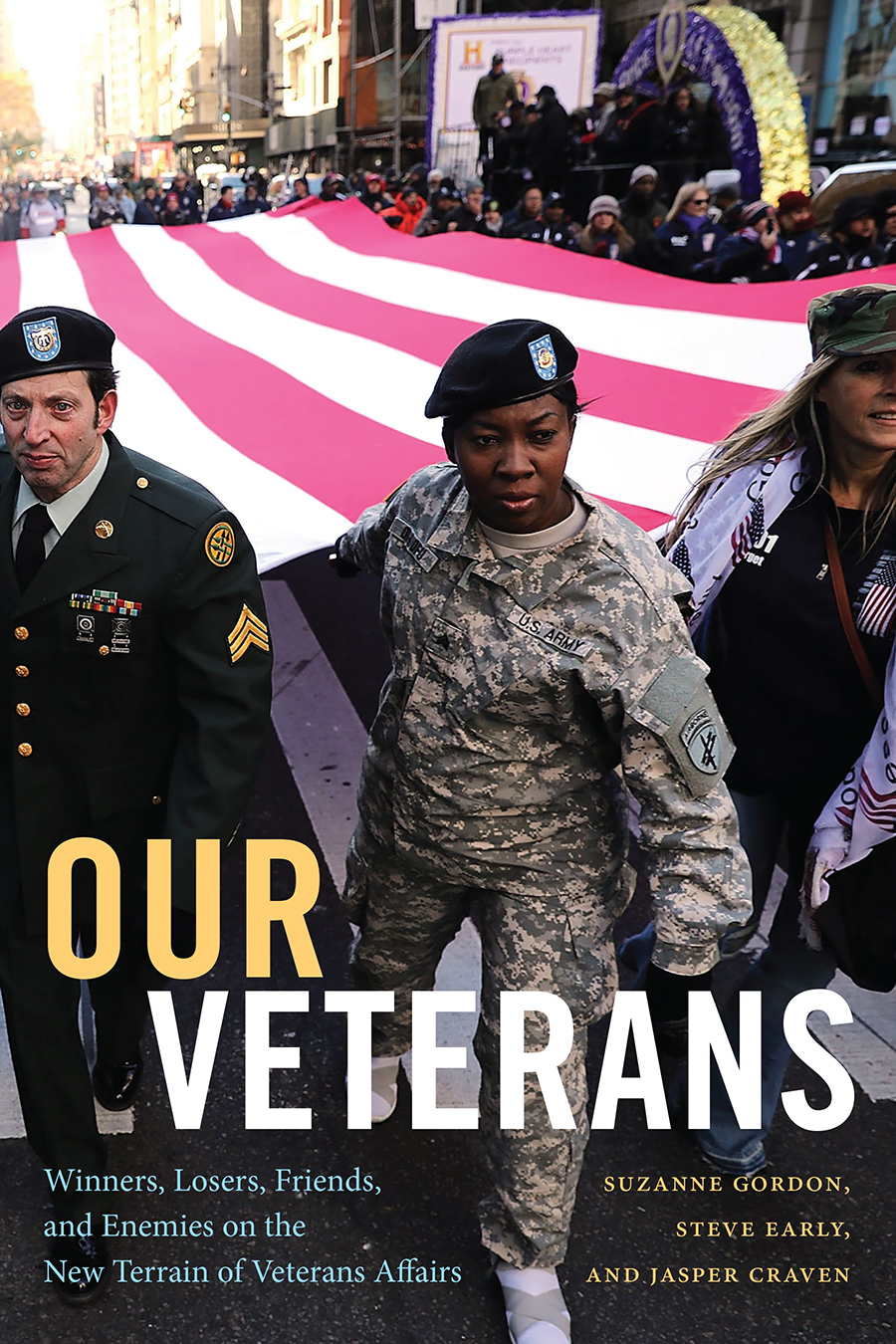 Now, in Our Veterans: Winners, Losers, Friends, and Enemies on the New Terrain of Veterans Affairs (Duke University Press, 2022), Gordon and co-authors Steve Early and Jasper Craven consider the unique problems and challenges facing a new generation of veterans returning to the civilian world, and the shortcomings of the system in addressing them.

As they state in their foreword: “Our mission in this book is to assess the resulting loss and damage many suffer in their work and personal lives and the political harm caused by some institutions and individuals who advocate for veterans or purport to be on their side.”

We find that our recent wars have generated a new group of veterans who, for a number of reasons, are pretty much invisible to our society. When we say to them “thank you for your service,” we still remain unaware of their needs, concerns and problems.

While centers of power give lip service to the need to address veterans’ issues, no action is ever taken to stop the escalating privatization and subsequent erosion of our veterans’ support system by the corporate world.

Unlike the draftees who made up a large number of the veterans of prior wars, our “New Vets” are all volunteers. But in reality, the majority more accurately should be deemed the subjects of an economic draft.

They entered the service as young people, usually from lower-income communities, who, when faced with poor job and educational prospects, opted to enlist. Their terms of service are much longer than those of previous draftees, meaning they have spent a large portion of their formative years living, and effectively isolated, in the military culture.

As detailed in Our Veterans, these longer terms of service have brought about a change in the demographics of the veteran community. As the authors describe:

“(T)he percentage of veterans in the adult population has shrunk by half since 1990, to eight percent or less. Four out of ten young people say they have never personally considered joining the military. In 1974 about half of all Americans who did so came from the South or Southwest. Today that figure is closer to 70 percent.”

As a result of all this, the new veterans end up politically and socially isolated from much of our mainstream society, and it in turn ignores or is even openly hostile to them.

This situation causes multiple challenges for many returning vets. With regard to employment, their military service generally does not prepare them for the civilian workplace, creating financial problems. Additionally, issues such as PTSD can further complicate employment.

One result is that a disproportionate number of veterans end up in police work. Counselors encourage them to apply to police departments, and the federal government has been urging local police departments to give preference to veterans.

Creating what is called the “vet to cop” pipeline, this brings a battlefield mentality to policing, which accelerates the ever-growing problem of militarization of our police forces. The very nature of police work can also trigger PTSD events for some vets.

As Gordon showed in Wounds of War and as she and her co-authors elaborate in Our Veterans, health care is a major issue for all vets, those who were deployed in combat zones as well as those who never served abroad.

We know from news reports that Gulf War Illness was caused by exposure to toxic wastes emitted from burn pits, which especially affects many of the vets who were in the Middle East — but most of us don’t know that vets who served stateside have similar problems.

Military bases in the United States are exempt from oversight by OSHA and the EPA, so stateside troops can be exposed to toxic chemicals (e.g. PFBs) and can be injured by dangerous equipment and hazardous workplace conditions.

Harassment, bullying and sexual assault have long been problems in the military, causing mental and physical harm. This is a rapidly growing concern now that women comprise about 20% of troops on active duty.

The federal government has a framework in place intended to address veterans’ financial and medical issues and provide them with health care, career counseling and education through the Veterans’ Administration.

This system in fact has worked very well. But as we learn from Our Veterans, it is being weakened by a movement, fueled by business and capital forces, to privatize the delivery of these services. This trend started in the Reagan era and has grown steadily through to the present time.

The Mission Act passed by Congress in 2021 directs 20% of the VA’s clinical budget to outsourced private providers. The authors detail how this outsourcing is neither efficient nor economically sound. Patients now experience longer delays for scheduling private appointments than they did in the VA system, particularly when it comes to mental-health related conditions.

Quality of services is also declining, as most private suppliers are not specifically trained or prepared to handle the range of military-related conditions presented. And even though such medical services are outsourced, the VA still must bear the administrative burden and cost of providing docketing and correspondence to the private providers, which is draining revenue and resources from the VA system.

A significant and powerful organization pushing for privatization and the demise of the VA system is the Concerned Veterans for America (CVA). As the authors state:

“The Kochs and other right-wing funders launched CVA so their ideological challenge to public provision of healthcare would have more veteran cover. CVA was then, and is now, a case study in corporate backed astroturfing. Unlike the old Veterans service organizations (VSOs), it has no grassroots infrastructure in the form of veterans’ posts or chapters.

“Its national leadership and staff have no accountability, via internal elections or conventions, to decisions made or resolutions passed by any dues-paying members — which the old VSOs, for all their flaws, still have. But with a big startup budget, CVA easily recruited a small cadre of conservative veterans who were personally ambitious, energetic, articulate, and, most of all, media savvy.”

Long-standing VSOs such as the American Legion, VFW, AMVETS, DAV and Vietnam Veterans of America have traditionally been advocates for the VA healthcare system, and generally oppose privatization. However, as the authors have shown, there is a cultural age gap which keeps these traditional VSOs from recognizing or having adequate concern for problems of the new vets, such as those arising from racism and sexism in the current military culture.

As a consequence, a number of new VSOs, specifically oriented toward new vets, have come into being. These new VSOs advocate for veterans and do not hesitate to challenge the old-school VSOs when appropriate. Two of the largest are the Student Veterans of America (SVA) and the Iraq and Afghanistan Veterans of America (IAVA). Both have memberships well into the six-figure range.

While traditional VSOs resist the privatization of the VA health system, a number of the new veterans’ organizations, including IAVA and SVA, are willing to accept privatization. They have aligned with corporate interests from which they eagerly accept foundation grants and funding.

Our Veterans reports on a very large swag-distributing, promise-making corporate presence at the SVA’s 2020 convention, which included Koch Industries, the creator of Concerned Veterans for America.

Yet we come to learn from Our Veterans that there is a growing movement of VA defenders fighting privatization. It is supported by some of the new VSOs such as Veterans for Peace, Iraq Veterans Against the War, and Common Defense.

Labor unions such as National Nurses United and the American Federation of Government Employees are also very actively opposing privatization, and the Communication Workers of America is sponsoring a network called “Veterans For Social Change’’ which is working on this cause.

The civilian community is largely unaware of the harm to all caused by the specialized problems facing our current veterans, and the growing drive to privatize the VA. Nor is it aware of the rising movement against this trend.

Anyone having concerns about these issues will find Our Veterans to be an essential source of information. It provides a thorough, well-written analysis of the situation, and the direction we need to take in response.