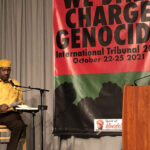 “GUILTY ON ALL counts” was the verdict issued in May by a panel of international jurists who heard testimony at the “Tribunal on US Human Rights Abuses Against Black, Brown, and Indigenous Peoples” held from October 23-25, 2021 at The Malcolm X and Dr. Betty Shabazz Memorial and Educational Center in Washington Heights, New York City.

A preliminary “guilty” verdict was rendered the day after the close of the tribunal. The more detailed findings, which had been anxiously awaited, include a 40-plus page explanation of the “guilty” verdict which begins with the following words: “The fact that the United States of America . . . has committed an array of human rights abuses against Black, Brown, and Indigenous Peoples should be as uncontroversial as it is incontrovertible.”

The principal theme of the Tribunal, “We Still Charge Genocide,” echoes an historic1951 petition to the United Nations — “We Charge Genocide: The Crime of Government Against the Negro People” — presented by William Patterson and Paul Robeson and signed by Dr. W.E.B. Du Bois, Claudia Jones, Harry Haywood and dozens of other important figures.

The entire text of the findings against the United States of America and its authorities, federal and state policing agencies and other government institutions is available on the tribunal website.

Also included are the names and backgrounds of the nine jurists and special advisory committee members. A list of witnesses and a link to the YouTube for the testimony is provided.

The text notes the widespread acceptance by scholars of “a total, relentless and pervasive genocide in the Americas” against Indigenous peoples since 1492, as well as “the consistency of broken treaties between the U.S. government and Native peoples.”

In reference to the Black population, the verdict quotes the citations by Tribunal Chief Prosecutor, prominent human-rights attorney Nkechi Taifa, of “racially biased executions and extrajudicial killings … whether by lynch mobs or officers of the law,” as well as “discriminatory treatment … embedded in police departments, prosecutors’ offices, and courtrooms.”

The verdict likewise concludes: “The colonial treatment of peoples of Puerto Rican and Mexican descent has also crossed the line beyond simple neocolonial norms, to acts of genocide.”

The findings of the jurists are based on a definition of “genocide” codified in the 1948 “United Nations Convention on the Prevention and Punishment of the Crime of Genocide,” ratified by 152 nations.

In addition to forbidding mass murders, the convention also outlaws “causing serious bodily or mental harm to members of the group” and “deliberately inflicting on the group conditions of life calculated to bring about its physical destruction in whole or in part.”

The Tribunal verdict draws this conclusion: “After having heard the testimony of numerous victims of Police Racism, Hyper-Mass Incarceration, Environmental Racism, Public Health Inequities, and of Political Prisoners/Prisoners of War, together with the expert testimonies and graphic presentations, as well as the copious documentation submitted and admitted in the record, the Panel of Jurists find the U.S. and its subdivisions GUILTY of all five counts. We find that Acts of Genocide have been committed.”

In the Spirit of Mandela

The 2021 International Tribunal was organized by a coalition of human rights advocates in the United States, working under an umbrella organization which called itself “In the Spirit of Mandela,” later shortened to, simply, “Spirit of Mandela.” The Spirit of Mandela indictment contained five counts: Police racism and violence; mass incarceration; political prisoners and prisoners of war; environmental racism; and public health inequities.

The accused parties were informed of the indictment and invited to present a defense to the Tribunal, but failed to appear or respond. The San Francisco Bay View sent a reporter to cover the event. In-person attendance was limited due to COVID restrictions, but there was an extensive on-line audience for the live stream.

“This is another historic — and now fully updated — finding that the U.S. is continuing to engage in institutional genocide on multiple fronts against Black, Brown and Indigenous peoples,” said one Coordinating Committee member of the Spirit of Mandela coalition, which has continued to meet monthly since the end of the tribunal itself, pledging that its efforts to combat genocide can and will continue.

The tribunal was not the culmination of that effort, but just the beginning. Spirit of Mandela is urging community, religious and political groups to organize talks and publish articles on the Jurists’ findings, and to join in efforts to hold the U.S. government legally accountable for these crimes. See the coalition website.