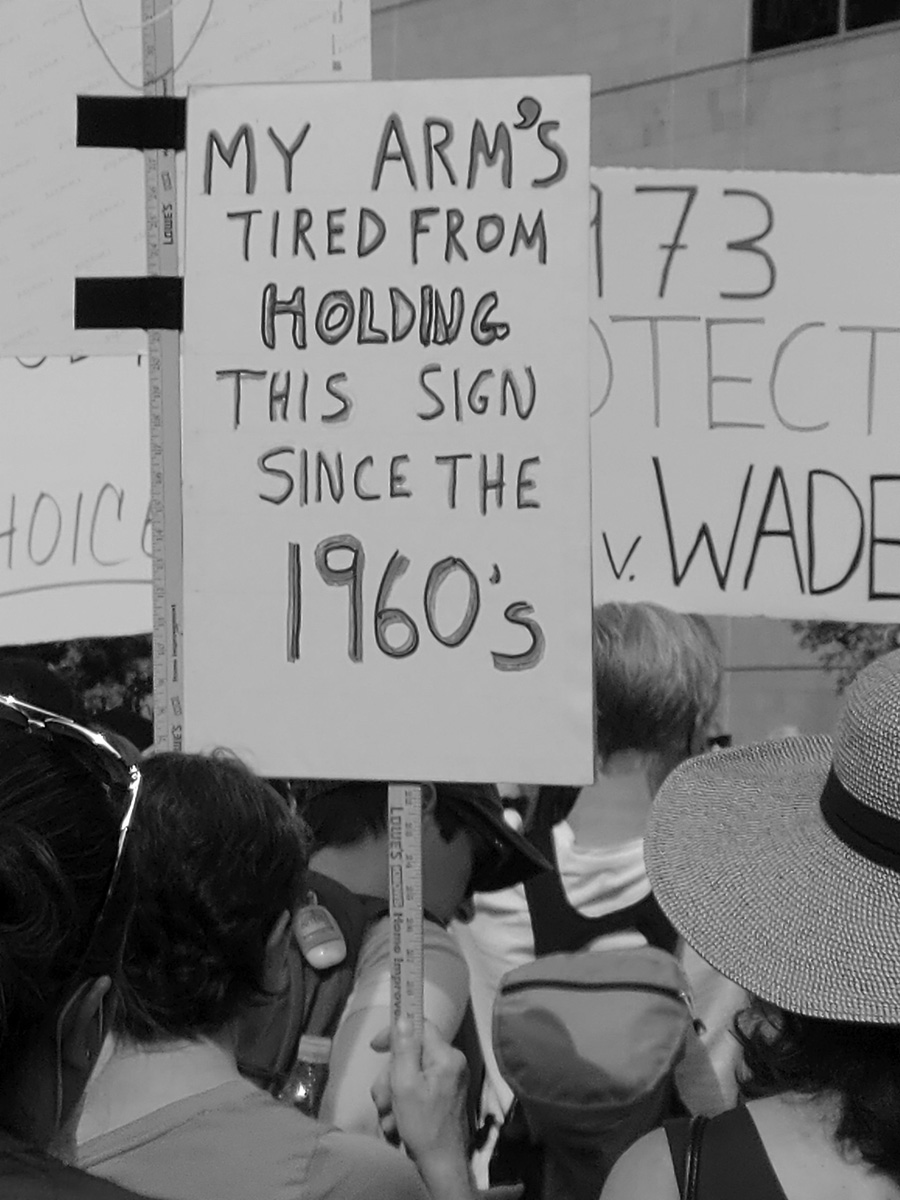 The struggle for free abortion on demand may match the length of time it took to win suffrage for women. Giselle Gerolami

JUNE 24 — THE OFFICIAL overturn of Roe v. Wade was announced as this issue of ATC goes to press. It didn’t require a white-nationalist riot, invading the Capitol at the instigation of Donald Trump, to tear huge holes in long-established constitutional rights in the United States. Where that frontal assault failed, a flanking maneuver by the right wing has met with success — including a blatant pseudo-constitutional coup by Court.

The overturn of Roe v. Wade not only declares war on women’s bodies and rights. As legal scholars immediately recognized, the leaked Alito Supreme Court majority opinion throws open a challenge to every basic right assumed to flow from the Fourteenth Amendment and the elementary principle of personal privacy — same-sex or interracial marriage, LGBT rights, incredibly even legal contraception.

Yes, the absurd “life begins at fertilization” doctrine creates a wide-open door to religious rightwing fanatic state legislatures to outlaw long-established methods of birth control, starting with IUDs and morning-after pills. “Parental consent” might be tested out as a legal ploy, or morning-after pills criminalized as abortifacients.

The silver lining in this deeply evil ruling is that, as the saying goes, what’s done in the dark will come to the light. Whatever the motivations for leaking the draft ruling may have been, we salute those who made it public — meaning that the popular outrage could explode last spring, rather than as the Court majority intended, in the summer political shutdown preceding the November midterms.

Chief Justice Roberts is righteously outraged by a leak that violated long-entrenched secrecy of the Court’s drafts and deliberations. Yes, confidentiality was established practice — so was stare decisis, meaning respect for precedents, especially when those had been confirmed in subsequent rulings. So was some decent restraint in overthrowing established rights, and concern for the human consequences of doing so.

Alito has thrown all that in the garbage in the service of a viciously reactionary ideology. Roberts, it’s reported, didn’t want to “go all the way” to consummating the destruction of Roe, preferring to shredding its substance by upholding the Mississippi 15-week ban while leaving Roe stripped naked but formally in place. Roberts’ concern is the precious “legitimacy of the Court.” That legitimacy, now at a low point, is precisely what needs to be destroyed.

The Making of a Monster

Roberts himself birthed the monster that he no longer controls. It began with the Court’s negation of a century of campaign finance law, followed by the gutting of the 1965 Voting Rights Act. Under Roberts’ pretense that Barack Obama’s election meant that racism no longer matters in election practices, he enabled the entrenchment of the WSCOTUS (White Supremacy Court of the United States) majority doctrine.

Something needs to be said here about the composition as well as the function of this Court.  It was under the influence of mass social movements — Civil Rights and Black Liberation and feminism above all — that Justices like Thurgood Marshall and Ruth Bader Ginsburg got to the Supreme Court.

These were not only powerful legal minds but veteran fighters for equal rights and justice. For a couple of decades, the Court took on the appearance as a —backstop for basic rights, even if inconsistently so.

Contrast them with the current six-person WSCOTUS majority. The three Trump appointees, who’ve done nothing in their lives except to be groomed by right-wing dark money and the Federalist Society to reach their present station in order to overturn Roe v. Wade, will perpetrate whatever malicious mischief opportunity may provide. The practice began back in 1991 when Clarence Thomas, even before he lied about harassing Anita Hill, lied about never having discussed Roe in law school.

That set the precedent for the succession of reactionary nominees to evade saying where they stand “on cases that might come before the Court” — openly lying with impunity in their confirmation hearings.

When Brett Kavanaugh told the Senate Judiciary Committee that Roe was both a precedent and “repeatedly confirmed” by subsequent opinions, there was exactly one person in the whole United States who apparently didn’t know he was lying through his teeth — Susan Collins, the pro-choice Republican Senator whose vote assured his confirmation.

The leaked Alito opinion, even if it might be sanitized a bit around the edges (like removing his scholarly footnote citing a 17th-century English barrister proclaiming abortion to be murder, and who also advocated the execution of witches), says very clearly that with the far right now firmly in control of the Court, what used to be rules of the legal and political game no longer apply.

Along with state legislatures running riot with anti-choice and voter-suppression and intimidation laws, legislatures are putting in place the power to overturn elections when they don’t like the results.

The destruction of reproductive rights and basic democracy is a seamless whole. Beyond the right to abortion, as crucially important as that right is in itself, this opens a more intense phase of a constitutional and political legitimacy crisis that’s been stewing in the United States for a decade or so.

It’s no coincidence that the most aggressive anti-abortion laws proliferate in the same states where maternity and infant mortality rates are already highest. Or that the most vicious anti-abortion politicians are also the most vociferous enemies of fixing this country’s tattered and disgraceful public health system, costing hundreds of thousands of lives during the COVID pandemic.

This is entirely logical behavior for a misogynist and racist right wing that cares about “sacredness of life” only before it’s born. But the brutality of that logic intensifies the level of public outrage around the overturn of Roe. That in turn may affect how rapidly some states move to protect abortion and other reproductive rights, and whether the federal-level Democratic Party grows enough spine to defend women’s rights more than verbally.

On the symbolic level, Senate Majority leader Chuck Schumer called a vote on the Reproductive Freedom Act already passed by the House of Representatives, but with no chance of reaching the 60-vote threshold to break the filibuster. Another symbolic, but more significant, show of defiance would be for the Senate Judiciary Committee to convene immediate hearings, charging Brett Kavanaugh and Neil Gorsuch for lying to Congress in their confirmation hearings. Don’t hold your breath…

It would be way too much to hope that Joe Biden would use presidential power to order abortion services to be provided in U.S. military hospitals, let alone announce nominations to expand the Supreme Court in order to restore abortion and voting rights. It’s illusory and enervating, rather than energizing, to dream of such miracles.

But there are bitter imminent fights that the federal government won’t be able to evade. State governments where abortion is banned post-Roe will seek, for example, to criminalize the use of abortion pills that are authorized by the Centers for Disease Control and Prevention (CDC), along with telemedicine counseling that’s become widely employed during the COVID crisis.

Since the federal government controls interstate commerce and the post office, it will be compelled to take a stand — or be complicit in the crackdown — on essential medical services. That becomes even more important if and when states try to prosecute pregnant people, or those assisting them, for going to other states for abortion services.

The biggest fights may occur within states — in Michigan for example, one of over a dozen states where snap-back anti-abortion laws will be in effect immediately after the Supreme Court ruling. Michigan’s 1931 law is being challenged before the state supreme court by both Governor Gretchen Whitmer and Planned Parenthood, charging that it violates protections in the state constitution.

In fact, a preliminary injunction is currently in place as the Planned Parenthood suit is before the court. In response, the legislature sued to overturn the injunction.

On another front, signatures are being collected for a ballot initiative — just over 425,000 are required — to place a reproductive freedom provision into the Michigan constitution. This referendum importantly goes beyond a narrow defense of Roe to cover a full range of expanded rights to contraception, pre- and post-natal care and childbirth, as well as miscarriage management. That’s especially significant since maternal and infant mortality, particularly in low-income and people of color communities, remain high.

Intriguingly, Michigan’s attorney general and seven prosecutors in the most populous counties where most of its reproductive health clinics are located, have pledged not to prosecute abortion cases if the state ban goes into effect. (The 1931 law criminalizes medical staff who assist an abortion. The only exception is to save the life of the pregnant person.)

What will happen if rightwing county prosecutors try to pursue residents going into counties where abortion services continue in defiance of the 1931 law? What if rightwing militants threaten or perpetrate violence against providers and patients?

It’s not hard to imagine the multiple levels of confrontation and chaos that can result from a deeply unpopular reversal of a basic right that more than two generations of people in the United States have assumed was an established fact.

It is true that restrictions have limited access to abortion. Most important is the Hyde Amendment that denies federal Medicaid funding for abortion. Whether the Democrats or the Republicans dominated Congress this amendment has been renewed every year since 1976.

We should know by now that when constraints are removed, rational behavior need not prevail. (In a different context, George W. Bush’s 2003 invasion of Iraq and Vladimir Putin’s present invasion of Ukraine are examples of irrationality with well-known catastrophic results we’ve explored in previous editorials and articles.)

It’s not probable that even the most troglodyte of state legislatures would attempt to abolish marriage equality. The likelier tactic would be something like resolutions empowering county clerks to deny licenses based on their “personal conscience” against same-sex or interracial or interreligious or whatever other marriages they happen to disapprove.

Outfits like the American Legislative Exchange Council (ALEC) are available to advise the levels of bigotry that might pass the SCOTUS test. Ultimately, the Supreme Court might be asked to restore the hideous Clinton-era Defense of Marriage Act that was struck down in 2013, the era before the white-supremacist misogynist monster took full control.

There’s no need to outline the sinister possibilities, as the list is endless and the creativity of the reactionary imagination has few limits, nor is it constrained by public opinion. What were once considered norms and rules of law, of process, of politics have been shredded.

For the defense of abortion rights in particular, it’s not a question of whether to be “in the streets” or “in the legislature” or “at the ballot box” or “through civil disobedience.” We need to be everywhere.

It is impossible to overstate how far basic rights can be driven back if the attacks aren’t forcefully resisted. The right wing’s coup by Court might have begun with its decades’ long march to overthrow Roe, but it absolutely will not end there.