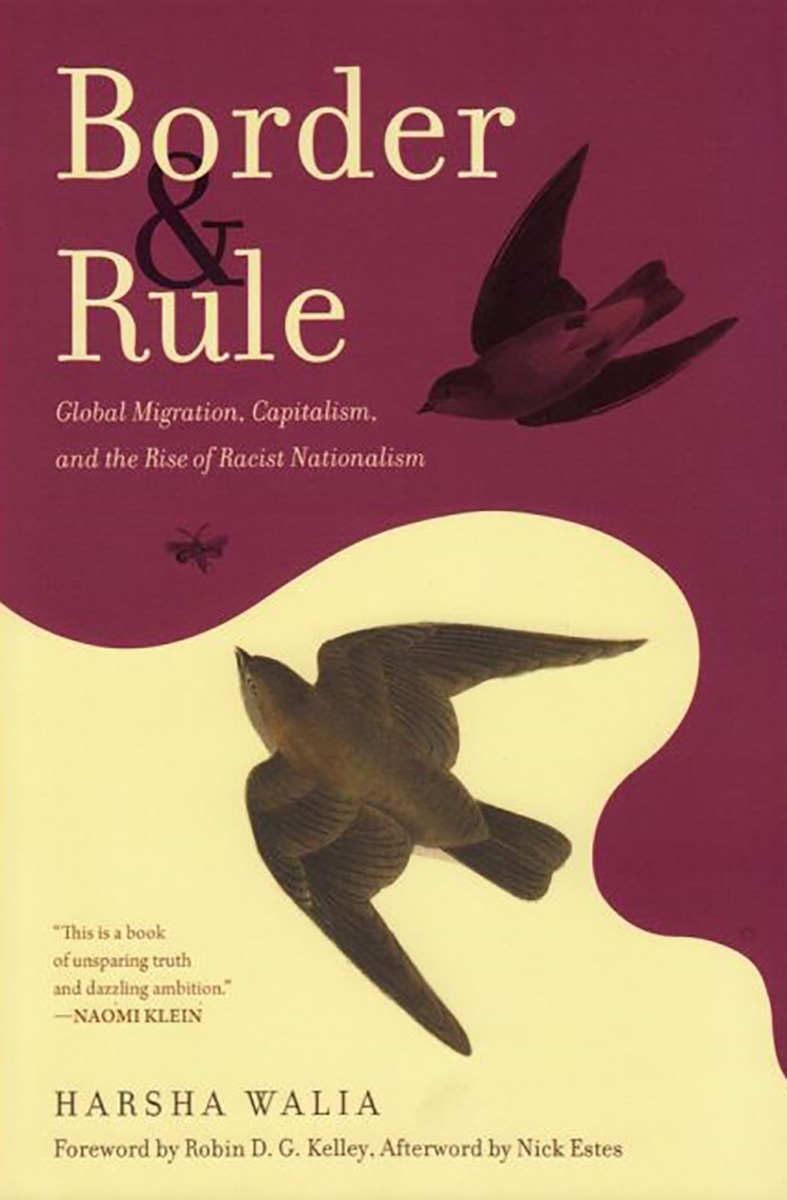 HARSHA WALIA IS an anti-capitalist, feminist, abolitionist and anti-imperialist activist and writer who is well-known in organizing networks in Canada. For over two decades, she has been among those on the frontlines of migrant justice politics through her work in No One is Illegal.

Reflecting her understanding of the deep entanglements of border formation with Indigenous dispossession — one of the themes in Border and Rule — Walia has also collaborated extensively with Indigenous-led struggles. This includes, for example, working with Indigenous women and trans people in the Downtown Eastside of Vancouver, one of the country’s most disadvantaged urban neighborhoods.(1)

Walia is part of an important layer of activists, organizers and movement theoreticians who, in the last two decades or so, have substantially re-drawn the stakes of migrant justice organizing in Canada.(2)

Offering a powerful critique of borders and the violence that goes into their formation and maintenance, the book is anchored in Walia’s varied organizing experience, diverse political commitments, and robust engagement with theorizing emerging from contemporary abolitionist, Indigenous, anti-capitalist, anarchist and other currents.

At the same time, Border and Rule is not directly about migrant justice and social movement organizing, the focus of her earlier book, Undoing Border Imperialism (2013).(3) Similarly, those looking for a detailed account of migrant subjectivities and of the modalities of resistance of those on the move will not find it in Border and Rule.(4)

Rather, Border and Rule is a powerful synthesis of academic literatures and journalistic accounts not often brought together in a single study. The book locates migration politics within a wide-ranging analysis of war and displacement, bordering regimes that criminalize the global working class, capitalism and labor exploitation, and racist nationalisms.

In keeping with Walia’s desire to avoid “methodological nationalism” (2)(5) in a book devoted to interrogating borders and right-wing nationalism, Border and Rule is not focused on a single national space or region, but rather traces transnational practices across various locales especially Canada, the United States, the Mediterranean region, Australia, and the Gulf States among other sites.

The book is divided into four parts, each consisting of three chapters. Part One, in keeping with much critical literature on migration, argues that the “migration crisis” is in fact a displacement crisis caused by “capitalism, conquest, and climate change.” (3)

This section also lays out her argument that, while often seen as disconnected struggles, migrant justice movements are in fact intimately tied to the long arc of Indigenous anti-colonial and Black abolitionist struggles. (Interestingly, the book does not engage with the growing literature on historical and contemporary Indigenous migrations, displacements and mobilities despite the fact that, in both the United States and Canada, Indigenous peoples make up a significant portion of, for example, agricultural labor migration.)(6)

Part Two, drawing mainly on examples from Europe, Australia and the United States, is devoted to understanding how borders operate and to anatomizing the making of illegalized and “undesirable” migrants through bordering strategies including offshore detention, interdiction, externalization of borders, securitization and militarization, and much more.

Among her key arguments in this section, one tied to her signature concept of “border imperialism,” is that the United States, Europe and Australia are furthering imperial relations by forcing other states and regions, via trade and aid agreements, “to build externalized infrastructures of migration control under imperial management.” (5)

Broadly, border externalization is a term used by policy makers and migration scholars to refer to the diverse array of practices by migrant-receiving states of the Global North (e.g. Australia, European Union states, and the USA) of extending border and migration controls into the territories of migrant-sending states of the Global South with the aim of stopping the flow of migrants and asylum-seekers.

Among other things, this advantages states in the Global North, by transferring the political and economic costs of managing migration to migrant-sending and transit states.(7)

Before turning to Parts Three and Four of Border and Rule, I want also to elaborate on this key concept of Walia’s, “border imperialism,” initially advanced in the introductory chapter to her first book, Undoing Border Imperialism. In this original formulation, “border imperialism” refers to an assemblage with four components:

1) mass displacements caused by capitalism and imperial states that simultaneously close their borders to the migrants they have displaced;

2) criminalization and illegalization of migrants, which in turn creates profits for those corporations involved in migrant detention centers and the militarization of borders;

3) expansion of racialized, gendered and nationalist exclusions in citizenship and belonging with consequential impacts on a global scale including profound violence;

4) increasing exploitation of migrant workers globally though denial of a pathway to permanent residency and citizenship in order to secure a disposable labor force.

While attentive to the regional differences in these programs globally, she argues that they are best understood as dynamic variations within “an international ordering of racial capitalism” (148), one which secures “cheapened labor without altering the racial social order through permanent immigration.” (133)

Finally, Part Four, consisting of two chapters and the book’s conclusion, examines the links between anti-migrant violence and racist nationalisms as well as the increasingly urgent problem of statelessness as evidenced by states that are making non-citizens out of subjugated citizens within the nation, including for example, Muslim citizens in India.

Specifically, Indian PM Narendra Modi’s Citizenship Amendment Act (2019), which has been the focus of mass demonstrations opposing the measure, provides for citizenship to be expedited for refugees from Afghanistan, Bangladesh and Pakistan — as long as they are not Muslim.

Additionally, those Muslims in India (including those born in the country) who cannot “prove” their citizenship, perhaps because they lack the means to acquire papers or birth certificates or they do not appear on the National Registry of Citizens for whatever reason, are now being declared “foreigners” and detained or threatened with deportation.(9)

Both measures are indexes of a profound ethno-nationalism whose violent consequences for Muslims in India are truly frightening and must concern us all.

While Walia has a strong critique of racist nationalisms and advocates, in a brief passage at the end of the book, for a left no-borders politics, she wants to hold out the possibility of a nationalism not tied to the nation-state, in part because of her commitment to Indigenous conceptions of nationhood as articulated by some Indigenous intellectuals such as Leanne Simpson.(10)

Walia’s position raises some important questions not explored in the book, including: nations predicated on what? Why imagine freedom through the idiom of nation?

Given Walia’s strong abolitionist politics, I would have liked to have seen the book engage with what Saidiya Hartman calls “the fugitive’s legacy,” the strong current within contemporary revolutionary Black theorizing (much of it coming from Black feminists) that envisions “autonomy rather than nationhood …the dream of an elsewhere, with all its promises and dangers, where the stateless might, at last, thrive.”(11)

How might these rather different visions of justice and liberation be brought into productive conversation with each other?

At the organizing level, anti-capitalist migrant justice organizers in Canadian context have grappled extensively and variously with the problem of articulating opposition to borders from within the space of a colonial state, often in dialogue with Indigenous people engaged in Land Back movements that are themselves thinking through problems of membership and borders.

This set of ongoing conversations is not captured in this particular book and needs to be traced through the last decade or so of movement and scholarly publications.

In part, this concept has emerged from movement frameworks that respond to everyday needs of illegalized and precarious status migrants for immigration status — something that relies on appeals to the state — while at the same time challenging the legitimacy of the Canadian state, including in matters pertaining to immigration, through insisting on the state’s colonial and imperial character.

As deployed in Border and Rule, the concept appears to signify both the entire displacement crisis driving migration and also, more specifically, to the ways in which powerful states compel other states, through aid and trade agreements, to agree to externalized border management and migration control on their territories.

Both points direct us to important issues, but I am not sure “border imperialism” as a concept can help us explain the broader problem: how exactly did the institution of national citizenship and the architecture of immigration controls become globalized?

In what ways, and why, did the post-independence and national liberation states that emerged after World War II contribute to the consolidation of this regime?

Asking these questions can lead to a more comprehensive analysis of contemporary state-led anti-migrant discourse and violence — including in states that are not necessarily on the global far right.(12)

Border and Rule is a stark reminder of some pressing realities that need a truly global strategic revolutionary vision. Displacement, dispossession, war and climate change mean millions need to move. (I would emphasize that human mobility is always going to exist even in the absence of these drivers of migration, all of which need to be fought not in the name of ending migration, but as part of a global struggle against patriarchal and racial capitalism.)

Immigration controls, detention, and bordering regimes kill. Yet, borders do not keep all migrants out and were never meant to, for they work to secure the exploitation of millions of illegalized and deportable racialized working-class people at enormous benefit to capital.

Anti-migrant and anti-“foreigner” discourse and violence is also leading to the un-making of citizenship in many states and is increasingly tied to rightwing, authoritarian states and nationalisms.

In short, migrant justice is increasingly central to all politics and to the fortunes of a global working class deeply divided by immigration status and national citizenship regimes. Border and Rule offers a lucid and expansive guide to the operations of borders and what is at stake in their abolition.