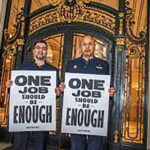 The 2020 HERE Local 2 successful slogan to explain the need for higher wages is increasingly important in a gig economy.

WITH THE JULY-AUGUST 2022 issue of ATC we conclude a series of articles (in issues ATC 215-219) written by leftists who, under the direction of their socialist organization, took working-class jobs in order to root themselves and their organizations deeper into the U.S. working class. In recent years, an emerging generation of socialist labor activists has become keenly interested in the history of that experience and lessons to be learned for today.

The Democratic Socialists of America’s Labor Committee (DSLC) hosted three panels in early 2021 to investigate what previous generations of socialists who took working-class jobs had done. Their responses became the preparatory readings for the panels and are the basis for these articles.

This issue features Dan La Botz’s account of the International Socialists’ orientation to industrializing, which was born out of the workers’ upsurge of the ’68-71 period. We are also adding a poem from Sam Friedman, who wrote about the Teamster struggle in that period.

ATC would like to thank the DSLC members Steve Downs and Laura Gabby, who worked to put together the panels.