America on Fire:
The Untold Story of Police Violence and Black Rebellion Since the 1960s
By Elizabeth Hinton
NY: Liveright, 2021, 416 pages, $18.95 paperback. 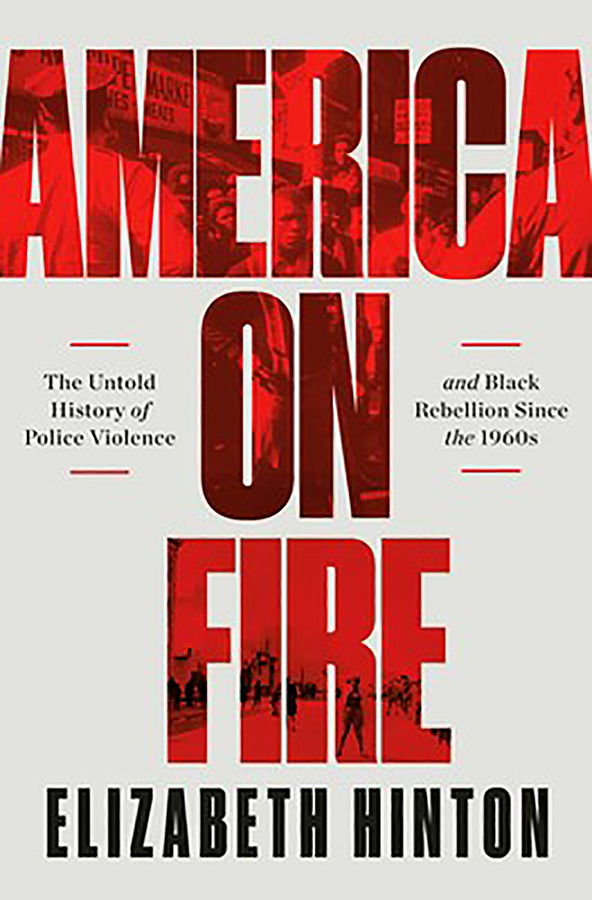 ELIZABETH HINTON BEGINS her magisterial America on Fire with no flames at all. A seemingly opposite scene, the determined serenity of the lunch counter sit-ins, provides her introductory tableau, dexterously staging the argument.

These famously nonviolent protests, clearly directed at identifiable policies, are often set as the converse of unrest called “riots” and described as “senseless,” supposedly lacking in political objective or explicable grievance. Not at all, Hinton shows.

With devastating detail, Hinton places the urban explosions of the late 1960s and early 1970s in relation to the failures of officials to respond to the demands of nonviolent protest. This context shows “riots” to be obviously and immediately responding to legitimate grievances and provocation, reinforced by citing people involved who unambiguously articulate this relation.

While the specifics of Hinton’s field- changing argument regarding police violence, popular agency, and shifting cycles of protest are noteworthy, an essential launching point involves the ubiquity of rebellion.

Drawing on records from the U.S. Senate and Brandeis University’s Lemberg Center for the Study of Violence, Hinton amasses a tremendous count of Black rebellions from 1964 to 1972 — and lists them all in a 25-page, single-spaced appendix. “Every major urban center in the country burned” (2) in those years, Hinton writes, demolishing the claim that such unrest could have been in any way exceptional.

The first shift in perspective that Hinton accomplishes involves the role of police in provoking urban protest. Over and over, unrest followed acts of police violence committed in the course of everyday policing activities.

Police would interrupt street baseball games or kids hanging out in parks, couples on dates or young people in transit in their neighborhoods, things they allowed white youth to do without intrusion.

People would object and altercations would ensue. Police would then call in backup while the crowds opposing their presence also swelled. Anger would burst from buckled chests and cities would burn.

With the same regularity of rhythm, officials would proclaim their ignorance about the sources or sparks of protest, blind to then-recent events — which Hinton has no trouble unearthing even half a century down the line. Showing those shrugs of public figures to be crucial contributions to the discourse of “senseless violence,” Hinton attacks the notion that people were responding to trivial slights or less.

Policing was rotten in small-town America, south and north, just as in the larger cities where police violence has been well-documented. People were responding specifically and directly.

State-sanctioned anti-Black violence was (and is) not limited to the police. The intensity of violence on the part of non-police whites emerges plainly in Hinton’s account. One resonant case study is Cairo, Illinois, where white people preferred municipal suicide to sharing power.

Civil rights activism flourished in Cairo from the beginning of the decade. Activists held sit-ins and picketed; white supremacists beat them up and stabbed them.

Activists switched tactics, bringing lawsuits to desegregate the swimming pool and roller rink. They won. African American skaters attempting to make good on their legal win by entering the rink were attacked with baseball bats. The owner of the pool filled in his facility with concrete rather than allowing Black bathers to enjoy it.

White violence increased again after Black protest blazed in 1967: whites pointed rifles at people from cars, allowed dogs to menace children on their way to school, and shot from a levee atop the Mississippi river down into the housing projects where the city’s African American residents concentrated. Steep decline over the years that followed made every Cairo life a little meaner.

Unequivocally, Hinton writes: “the sustained violence against Black people in Cairo in the past decade [the 1970s] led to the slow death of the city consumed by its own racism. Everyone lost” (196) — though as always Black people suffered more.

Cairo today is a shadow of its former self, all vital organs severed from the body politic by the white refusal to allow anything good to come to their Black neighbors.

While Cairo may have been extreme in having white residents shooting directly into Black housing projects, the pattern of white retrenchment was nationwide. All over the country, cities choked as whites chose inaction over resource redistribution, ensuring the continuity of rebellion and retaliation.

What was built in the wake of protest was not what the Kerner Commission (appointed by Lyndon Johnson following the 1967 rebellions — ed.) and the slew of similar commissions and committees organized to study and respond to protest recommended — opportunity, education, housing and health infrastructure — but the carceral systems of policing, prison and social repression. Mass incarceration is a product of domestic counterinsurgency.

This is another stunning reframing of recent U.S. history. It involves seeing the rebellions of the late 1960s and early 1970s as part of a terrible cycle. The cycle began with America’s failure to respond to the demands conveyed through nonviolent protests.

What some call “riots” were Black collective responses to that lack of will. Police response to the “riots,” misunderstood as such, provoked further rebellion — not only directly, but indirectly by anchoring the social inequality that underlay unrest.

Rather than implement effective social reforms, then, the country at every level of scale chose to buttress punitive measures, first and foremost by expanding police numbers, material, and role in public life.

Hinton’s conclusion is incontrovertible: the carceral system — that has ravaged the families of the American poor and working class, particularly in Black, brown and rural communities; that has hollowed out urban life, exacerbated housing crises, sent poverty sky rocketing, fed opioid and meth crises in rural communities and crack and other health threats in cities and suburbs; that has torn children from parents, deskilled the U.S. workforce and decreased life expectancy overall — is the equivalent, on a grand scale, of the destruction and decline city fathers chose for Cairo.

Linking mass incarceration to “the draconian police ethos born in the 1960s and 1970s in response to mass violence” (3), Hinton adds the ideological to the overly empirical “pipeline” argument (that police feed incarceration by arresting people — a line of causation I have been too willing to accept).

This much more robust view of why fortifying police brought about hyper-incarceration strengthens the other nexus she establishes in the book, the join between police violence 50 years ago and its ongoing expression today.

Ours is a perfect vantage point from which to look back, just after the wave of anti-policing protests following the 2020 police murder of George Floyd in Minneapolis. Readers today are (hopefully) poised to embrace the conclusions Hinton’s narrative reveals, insights about policing that hold well beyond the period of the 1960s and ’70s.

The most important of these, I think, is that policing is both the recipient of the resources the nation chose not to devote to reversing structural racism, and the axis of the state violence required to maintain that inequality. Hinton sees the full gamut of racist systems, including residential, educational, health-oriented, political, economic and interpersonal; but policing, she aptly reasons, sustains and underlies them all. “Defund the police” takes on rich new dimensions in this perspective.

Hinton’s point about police as the essence of both direct and indirect state violence contains a devastating critique of liberalism. The liberal hope that goodwill and gradual change will sweep away a vestigial viewpoint has been unwarranted, Hinton clearly shows.

But liberals were not just benignly mis­guided. Recall that Kerner and his fellows famously proposed broad and progressive reforms, all of which were abandoned when “ultimately they backed the police.” (172)

Hinton argues that this follows directly from the ways Kerner-style liberals then and since understand Black people and protest. Despite seeing the socioeconomic roots of many national problems, they pathologized African Americans, understanding racism as Black perception or projection, as white people had from Plessy to Daniel Moynihan.

Liberals were unable to challenge the framing of Black insurgency as “riots” even when they found the underlying discontent legitimate, because they accepted the notion that the violence was an outburst of spontaneous, irrational, ultimately counterproductive emotion. Hinton here reinforces the argument she and others have made before, that liberals are as guilty as conservatives in producing the conditions we face today.

Liberals essentially agreed with conservatives that Black protest was a form of mass criminality, yet refusing to see lynching and other forms of white mass violence as such.

Liberalism suffers another blow in Hinton’s discussion of the architecture of racial violence — the literal architecture, in the form of housing projects built to great fanfare during the New Deal. By the 1960s, they were crumbling miserably, having deteriorated into forms of state violence themselves.

Black people well understood how housing projects, to which Hinton devotes an early chapter, comprised “the infrastructure of racial oppression” (49), especially (as in Cairo) when they could contrast Black shelter with the better-preserved facilities in which poor white people lived. No wonder housing projects, particularly their administrative offices, were often targeted when the burning began.

“Both the punitive and social welfare arms of the state weighed on housing project tenants,” Hinton explains. “As sites of concentrated poverty, housing projects gave residents good reasons to rebel.” (68) Any nostalgia for the liberal welfare state should be dispatched by this compelling history.

Hinton ends by bringing the story up to date: In summer 2020, protests “in response to state-sanctioned violence” rocked some 2400 U.S. cities. (288) The George Floyd insurgency belongs fully in the tradition of the long Black freedom struggle, though the protests have changed in fifty years.

Protest in the 1960s and 1970s was rooted in political and economic inequality but sparked by the policing of everyday life. In the 1980s, rebellions were triggered less by quotidian policing and more by exceptional police violence, and their target shifted to the entirety of the criminal justice system.

That analysis lets activists today directly address the ways “policing and incarceration in America anchor totalizing systems of political and economic oppression” and highlight the “structural shortcomings” of liberal reform. (291)

Today’s protests now include many white people and often happen in white cities, Hinton continues, placing them in the legacy of urban insurgency and thereby effectively answering the dismissal of non-Black activism as illegitimate outsider interference.

Technology such as cell phone videos has made the denial of violence less tenable, but the forces of retrenchment still forestall systemic change. What now gets called the “movement for Black lives” must navigate this new terrain established by its (predecessors’) victories as well as by the ways racism has evolved to contain them.

With rebellion front and center, the picture Hinton paints foregrounds the reasons for and role of violence. State violence in material and direct form will not go unanswered. Nonviolence is provoked by and powerful due to the violence all around it.

Nonviolence and violence are “entwined forces,” a point Hinton proves repeatedly. The sit-ins with which she began perfectly illustrated this relation. The lunch counter protests were nonviolent only on one side. That is, the people sitting in Woolworth’s may have been so, but those trying to roust them were most decidedly not.

Nonviolent protest drew white refusal in a range of violent forms, all of which continue — material, economic, state-sanctioned but delivered by white vigilantes, via prisons and in the form of police. So too, Hinton warns, will violent rebellion, until….

What? Alas, Hinton pulls her final punch. Until the nation no longer leans on police power to buttress material conditions beyond police control, she writes.

Yes, that is one possible stopping point. This considered (and successful) play for accessibility, strategic though it may be, shirks the full ambitions of the tradition of insurgency Hinton has documented in this wonderful book.

This radical tradition reaches for something far beyond the capacity of the U.S. nation-state, liberal at its absolute best, defined by police power in its essence. Readers who so choose can draw another conclusion from the material carefully collected and deftly offered up in these pages.