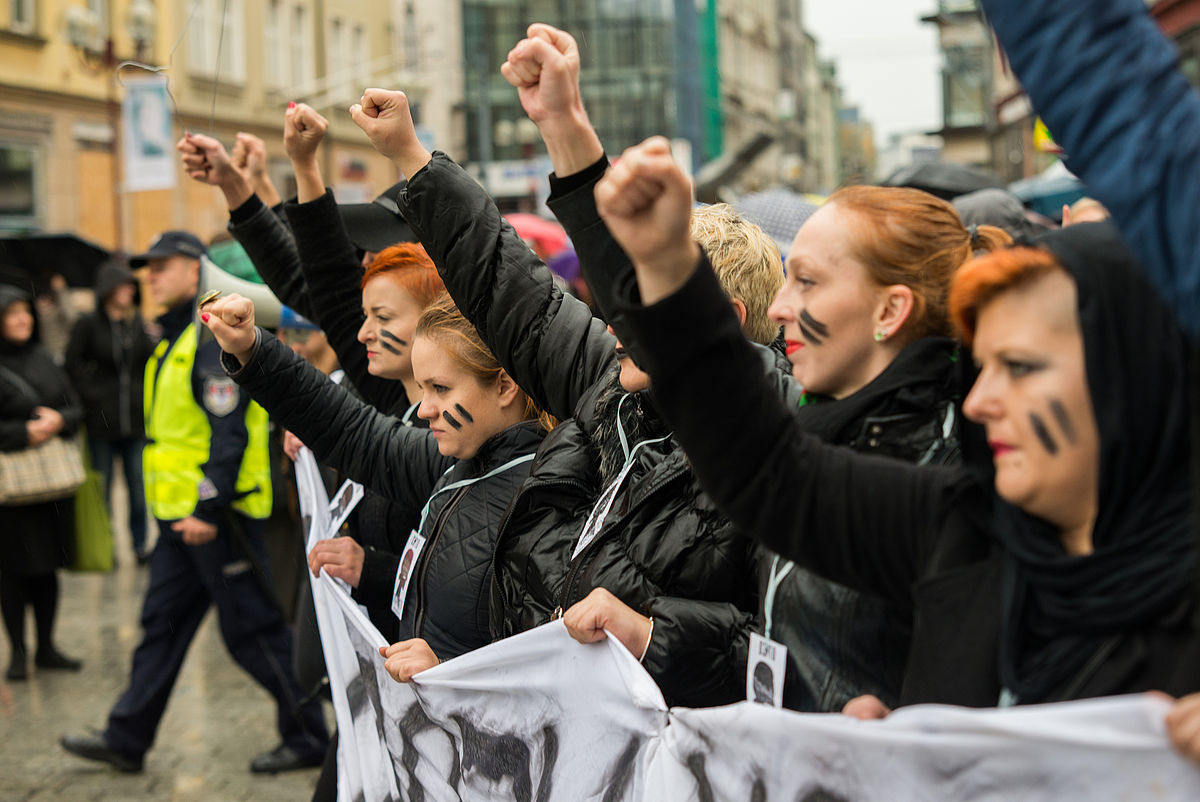 ON OCTOBER 3, 2016, I was about to teach my regular Monday morning class at the University of Warsaw, a day in the life of a college professor. This Monday would be different, though.

When I entered the university campus, I was astonished to see my female colleagues and female students all dressed in black — the color of mourning.

In the afternoon, the vast majority of us left the campus and headed in the same direction — the Castle Square — to join thousands of women and manifest our anger, resentment and resistance. Our main goal was to prevent the Polish parliament from adopting a bill that would tighten the abortion law, already one of the most restrictive in Europe.

Adopted in 1993, the abortion act limited a termination of pregnancy to three instances: when pregnancy was a result of rape or incest, when a fetus showed risks of severe damage or illness, or when the life of a woman was endangered.(1)

These proposed draconian measures raised women’s anxiety and fears over their health and life. Protesters held banners bearing slogans “Besides wombs we have also brains!,” “My body, my choice!,” “I am, I think, I decide!,” “We want doctors, not missionaries!” and “Free choice!”

Despite the gloomy weather, the demon­stration lasted a few hours. Similar protests took place in over a hundred Polish cities and towns and attracted more than 150,000 people. Wherever people took to the streets, their anger, resentment and resistance mixed with hope, solidarity and empowerment. Although protests focused primarily on reproductive rights, many women expressed their opposition to marginalization and submission, deeply rooted in the Polish culture.

It was a fight for equality, justice and dignity. The so-called Black Monday, as it became known, was the peak of the first wave of women’s protests — “Black Protests” or “Women’s Strike.” In the months and years to come, Poland would witness numerous demonstrations, marches and rallies, and a wave of public debates and social media campaigns defending and promoting women’s rights.

The mobilization of women succeeded. The proposed anti-abortion bill was defeated. Nonetheless, new restrictions were soon to follow.

In October 2020, the Constitutional Tribunal — highly politicized under the current regime — opined that a termination of pregnancy in the case of fetal anomalies was unconstitutional.

The Constitutional Tribunal’s decision has already led to tragic consequences. In September 2021, Izabela, 30, died of septic shock after doctors delayed removing her fetus (diagnosed with congenital anomalies) until the fetus showed no signs of life.

Izabela was one many Polish women who was refused a life-saving abortion. Following Izabela’s death, another nationwide protest erupted. Its main motto read “Not One More.”

“Women’s Strike” activists have continued to mobilize their supporters against restricting women’s rights. Even though the nationwide mass protests did not prevent the government from restricting abortion rights, women’s mass mobilization has scored at least three victories: it reinvigorated feminism, broke down a myth of the so-called abortion compromise, and called into question the Catholic Church’s interference in public affairs.

The year 2016 was when “feminism started in Poland,” noted Ewa Majewska, philosopher and feminist activist. Whereas before 2016 women and feminist groups comprised primarily urban educated middle-class and academic and non-profit organizations,(2) in the past five years the women’s movement became much more inclusive, interclass and nationwide.

The most recent protests have drawn women from different social and economic classes, representing various political affiliations and religious viewpoints. Although it originated in big cities, social mobilization has now spilled over to small towns and tiny rural areas where street marches, demonstrations and rallies were staged for the very first time.

Many protesters have not identified themselves as feminists or even activists, but shared the same feeling that “enough was enough.” Along with the traditional forms of protests, new forms of dissent emerged.

As Elżbieta Korolczuk observed, “of key importance for ‘scaling up’ of protests was the fact that the mobilization followed the logic of connective action based on personalized engagement, in which communication became an important element of organizational structure.”(3)

Hundreds of thousands of Facebook users joined the best-known groups — Polish Women’s Strike (Ogólnopolski Strajk Kobiet) and Gals4Gals (Dziewuchy Dziewuchom). Facebook and Twitter became particularly important for the women’s rights supporters at the time of restrictions on public gatherings imposed by the government in the COVID-19 pandemic.

The women’s mass protest greatly contributed to calling into question a dominant narrative on reproductive rights and reproductive health. For almost three decades, the harsh abortion law of 1993 was widely recognized and adopted in Polish public debates under the moniker “abortion compromise.” The term suggested that social and political disagreements over the termination of pregnancy had been settled through compromise and mutual concessions of all interest groups.

In public debate abortion became associated with homicide, killing or murder, and a pro-choice position with evil, immorality or even criminality. Imposed by anti-abortion groups, this narrative became so dominant and effective that even feminist activists believed that the language of discourse was set in stone.(4)

The year 2016 revealed that this was not the case. The legitimacy of the “abortion compromise” was challenged, often described as nothing more than a “myth.” Demands for reproductive rights and changes of the existing abortion law grew louder and wider.

The public was reminded that the restrictive 1993 abortion law had been passed in spite of great and bitter political controversies and with a violation of democratic rules. Although in 1992 1.3 million Poles signed a petition demanding a referendum on the abortion law, the referendum had never been held.

One would not need a crystal ball to predict the outcome of a nationwide referendum on abortion. Public opinion polls showed that more than 50% of Poles supported liberalizing abortion policies and the majority believed that abortion should be allowed for social and personal reasons, including “difficult living conditions.”(5)

Despite the episcopate’s claim that the Church does not make laws in Poland (a claim that’s true on the surface), the Catholic lobby exerted an immense influence on laws regulating reproductive rights. In the aftermath of the collapse of communism the separation between state and church has eroded, and the political power of the Church, especially with regard to influencing social legislation, has grown.

If the truth be told, in post-1989 Poland, it was the Catholic Church that initiated and promoted a debate on abortion. The final version of the 1993 abortion law was significantly affected by the Catholic lobby.

In the years that followed, the ultraconservative Catholic groups lobbied heavily for a total ban on abortion. Their wish became a reality when the parliamentary victory of the right-wing populist Law and Justice (PiS) in 2015 laid a firm foundation for such legal changes.

The 2016 anti-abortion bill was drafted by lawyers representing a Catholic advocacy group ominously named Ordo Iuris, Order of Law. As soon as Ordo Iuris, under the guise of citizens’ initiative, submitted to the parliament a draft of the “Stop Abortion” legislative proposal, the Church supported it immediately, as did the Law and Justice party.

In many ways, it was a watershed moment. The critics of the bill did not only condemn the proposal itself but also openly criticized the Church and its excessive and unwarranted influence on public life. In fall 2020, in many cities, thousands of protesters disrupted Sunday mass services. They carried banners with slogans “Human law, not ecclesiastical law,” “This is war,” and “Girls just wanna have rights.”

Attacks on churches were unprecedented in a country where a long-standing image of the church as a vital component of Poland’s statehood and a bastion of Polish identity had never been challenged or even questioned. The Church, no longer seen as a religious institution of the faithful, was now perceived as a source of unwanted political influence, a spiritus movens of abusive laws, and a wellspring of social and political polarization.

In the words of a 27-year-old female student, “the church is a very conservative, antiquated institution that is heavily involved in politics and tries to impose its views on all the people and turn them against each other, dividing them into good and bad.”(6)

The Main Challenges Ahead

Looking ahead, there are two main challenges that the defenders and promoters of women’s rights in Poland will need to recognize and reckon with: winning the hearts and minds of our compatriots, and gaining political access.

Thus far, the majority of Poles have backed the mass women’s protests. According to recent polls, 63% support the social protests sparked by the Constitutional Tribunal’s decision to tighten the abortion law. The supporters vary in terms of their political preferences: 87% identify with left-wing political views, 74% with centrist views, and 62% describe themselves as neither on the left nor on the right side of the political fence. While 85% identify themselves as opponents of the government, 62% declare their indifference to the current government.(7)

Despite public support, women’s rights advocates have faced a strong pushback from the conservative right-wing groups allied with the Church. Feminist activists and protesters have been depicted as “criminals,” “neo-Marxists” and “nihilists” while demonstrations and social mobilization have been portrayed as a sign of a “cultural civil war.”

In October 2020, Jarosław Kaczyński — the Law and Justice leader and the undisputed power broker of Poland’s politics — openly accused demonstrators of seeking the destruction of the Polish nation and appealed to his supporters to “defend Poland.” In response to Kaczyński’s appeals, an ultranationalist group formed a “Catholic self-defense” force, a “national guard” to oppose “neo-Bolshevik revolutionaries” and “to stand in the front line of the counter-revolution fighting against extreme-left activists.”(8)

State control over public media and growing power of the Church are likely to provide the government with the means to discredit the women’s protests among large segments of the Polish population. As the lesson of the so-called abortion compromise teaches us, controlling the political narrative can effectively shape public opinion and marginalize political opponents.

While in 1992, 53% of Poles favored allowing abortion if a woman was facing financial difficulties, this number dropped to 20% in 2020. (Polish society is aging, and the general trend shows that the older one is, the more conservative one becomes.) Moreover, many politicians have little interest in healing social divisions and becoming consensus seekers in a society where debates over reproductive rights can further accelerate conflicts and polarization.

The vast majority of Polish politicians support the “abortion compromise” and, taking into account the nature of Poland’s domestic politics, it is in their best interest to steer clear of antagonizing the Catholic Church. Although several female MPs from the center-left parties have been actively involved in defending women’s rights, they are long on ideals but short on votes.

Defenders and promoters of women’s rights need to increase their political representation. There is no other way in a state where grassroots initiatives and movements can impact the legislative process only when their power to lobby is granted as legitimate by the central government, and in a society — chronically dissatisfied with life and lacking the ability to affect the surrounding reality — that expects social and household benefits to be provided by the state.

Without votes in the legislative chambers, “Black Monday” marches and “Not One More” demonstrations are destined to remain just a public display of negative identification vis-à-vis the heavy-handed state. The next parliamentary elections in Poland are to be held in 2023 — and then, in 2027 and 2031…

But to transform a mass mobilization into an effective legislative lobby, women’s rights groups need to bring their influence, manifested in the streets, to bear on the political process. It will be a daunting task considering that the right-wing and center parties have continued to tower over the Polish political scene.