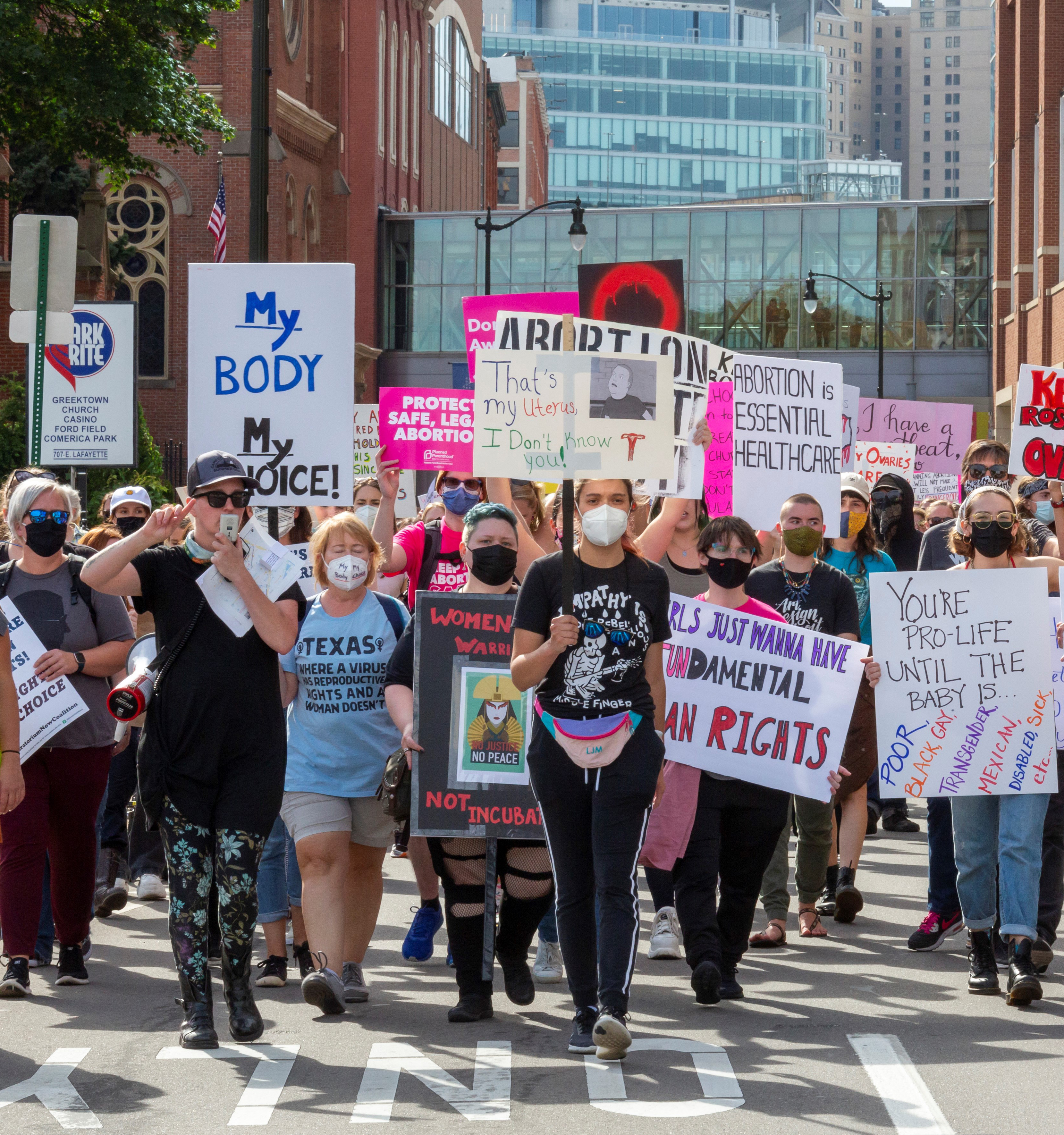 October 2, 2021 Detroit march to defend legal abortion. It was one of hundreds of rallies across the country two days before the U.S. Supreme Court began its new term. https://jimwestphoto.com

THE FRONTAL ATTACK on abortion and reproductive freedom in the United States is the cutting edge of the general right-wing assault on democratic rights. And although the Roe v. Wade decision has been in effect for almost half a century, access to medical care has always been limited.

The Roe decision parallels the 1965 Voting Rights Act, with both under attack from day one. A runaway right-wing Supreme Court has effectively gutted voting rights in a one-two punch and is poised to do the same with abortion rights.

In the case of the right to abortion, the feminist movement’s demand has been legal, free and accessible. Yet from the very beginning, medical institutions — whether hospitals, medical schools, professional medical organizations, or doctors — rarely viewed the decision as requiring abortion to be incorporated into their medical practice.

Religious institutions and individuals claimed the right of refusal, thus stigmatizing abortion. Even today, fewer than five percent of U.S. abortions are performed in doctors’ offices or hospitals. Isolating abortion from mainstream medicine opened the way for the right wing to attack, whether through harassment of stand-alone clinics, intimidation of its personnel or passing legislation at the state or federal level.

For its part, Congress has denied funding abortion for poor women (the Hyde Amendment) and outlawed a medical procedure for late abortions. The Helms Amendment, which prohibits U.S. funding for abortion to family planning services internationally, has been in effect since 1973.

All this legislation is intended to prevent those who are pregnant who want to abort from carrying out their decision. Although it is unclear how many are prevented from doing so, these laws force someone to jump through hoops to obtain one, increasing the hassle and financial cost.

In addition to designing and shepherding through this reactionary legislation, the right has set up a network of phony clinics to entice the unsuspecting with free pregnancy and ultrasound tests. Once there, the person is barraged with false information and pressured into continuing the pregnancy. While there are around about 800 clinics that provide abortions, there are 3,000 phony clinics.

Who seeks an abortion? They are disproportionately Black (25%) and brown (28%). Half are in their twenties, 12% are teenagers. Three-quarters are low income or poor; a majority are already parents. Currently 58% live in states that are considered hostile to abortion rights.

Why do they seek an abortion? In a country that fails to provide sex education, offers so little social infrastructure, has little quality day care or paid leave, 25% of those of childbearing age seek an abortion. Not surprisingly, women living in precarious circumstances are those who feel the need to end an unwanted pregnancy. The reasons are many — but why should lawmakers judge which are compelling? Of course, the right wing’s disingenuous professed answer is that it is necessary to “save” women from making bad decisions, one they will regret the rest of their lives. In actuality, the decision has been carefully considered.

This concern is not about saving women but about controlling them. It is part and parcel of the right wing’s drive for control over minority populations, whether by driving abortion underground or through methods of voter suppression, racial gerrymandering, removing books from school libraries or banning “Critical Race Theory.”

These are attempts to hide inequality by legislating it away all references to it. How ironic that the right desires to deny the pregnant control over their bodies but speaks of the right to control their own by refusing to be vaccinated. What is “freedom” from vaccinations or mask wearing in the middle of a pandemic? But rules are for them to break or not as they see fit; for the poor the law is written to deny one’s humanity.

That’s why the right describes Black Lives Matter marches as unlawful riots while the January 6, 2021 invasion of Congress was “legitimate political discourse.” Offering no verifiable proof, they maintain that the 2020 election was stolen. This “law and order” gang organizes heavily-funded and possibly armed “convoys” to occupy North American cities and border choke points in the name of freedom.

All Our Rights at Stake

Poll after poll reveals that the right to abortion care actually has more popular support today than when Roe v. Wade was decided. Despite so many attacks and restrictions, and despite the decision’s own flaws, abortion is an established constitutional right.

If that right can be mutilated now, precedent and public opinion be damned, then no rights are secure from reactionary assault. For right-wing sharks, getting rid of Roe is blood in the water, especially for women and non-binary people.

A Supreme Court ruling stripping a legal and popular constitutional right will mark a new step by the emboldened right wing. What then about more recent gains like marriage equality, the fragile advances in transgender rights, or even much older ones like legal access to contraception (which the appalling Amy Coney Barrett hints she might like to explore sometime in the far-out event if a state restricts it)?

Critical Race Theory explores how and why civil-rights and racial-justice gains once considered won for good can be rolled back. It happened in the 19th century’s violent post-Reconstruction, white-supremacist counterrevolution and which is unfolding before our eyes today. We could use a “Critical Gender Theory” to help explain how women’s most basic personal and social rights are never guaranteed under a patriarchal capitalist order.

The 1965 Voting Rights Act has been effectively overturned by the U.S. Supreme Court under Chief Justice John Roberts. First, in 2013 the Court gutted the formula that demanded those states and localities with a history of racial discrimination pre-clear any changes. Second, in 2021 the Court allowed discriminatory procedures not provably motivated by discrimination.

Back in 2013 Roberts claimed that discrimination was no longer the problem it had once been, but since these rulings, hundreds of polling stations have been closed, early voting has been shut down, redistricting progresses with abandon and state legislatures vote themselves power to over­rule a vote they don’t like. The John Lewis Voting Rights Act, which would restore the heart of the Voting Rights Act, remains stalled by the Senate filibuster.

Roberts, who voted with the Court minority against allowing the brutal Texas anti-abortion law to take effect, now appears to be worried that the monster he’s helped create may undercut the Court’s very legitimacy.

Indeed, in view of the emergency facing the reproductive rights movement, the legitimacy of this Court — in both its present stacked, reactionary composition and in its anti-democratic appointment-for-life institutional character — stands exposed.

President Biden’s Supreme Court nomination (pending as this issue goes to press), will not change its hard-right majority composition. But the confirmation hearings will undoubtedly heighten the bitter fight over abortion rights with the Republican attempt to prolong the debate until their hoped-for November takeover of the Senate.

Wherever racist movements and reactionary religious authority are on the rise, abortion rights are restricted with horrific effect on women’s lives. When those forces are in retreat, women’s rights — ranging from scientific sex education, quality day care, adequate housing and parental leave to freedom from sterilization abuse, domestic abuse, sexual assault and femicide — move forward.

While legal abortion is more than a dozen times safer than childbirth, it is estimated that worldwide 25 million undergo illegal abortions annually. This results in 23,000 deaths and many more who suffer complications. Sixty-six countries have either a total prohibition on abortion — such as El Salvador and Nicaragua — or allows it only to save the parent’s life, as in Brazil or Nigeria.

In El Salvador, if authorities suspect a person is responsible for terminating or supporting the termination of a pregnancy, they can receive a maximum prison sentence up to 30 years. In the first decade of the 21st century, at least 26 Salvadorans women who had miscarriages or self-aborted were convicted of aggravated homicide.

Mexico recently decriminalized abortion although feminists are still battling the shaming they often face in seeking abortion, shockingly even from health professionals. The Center for Reproductive Rights points out that over the last quarter century, 60 countries have liberalized laws on reproductive rights.

In the Republic of Ireland a 2018 referendum, repealing a constitutional amendment that conferred the “right to life” of the unborn, passed with a 66% majority. This decisive vote came from the combination of a movement in the streets with the dramatic cases of pregnant girls and women unable to get the help they needed.

Although the Irish government had attempted to soften the constitutional amendment, the 2012 death of 31-year-old dentist Savita Halappanavar revealed its lethal consequences. She suffered a miscarriage, but a physician at University Hospital Galway was afraid to perform emergency surgery as long as there was a fetal heartbeat. Halappanavar ended up dead from severe sepsis.

Over the last year or so, Poland has also seen two deaths of pregnant women in similar circumstances. A vibrant movement opposing repressive laws is challenging the authoritarian government and even bringing their message to the church’s altars. Meanwhile they aid those needing to end their pregnancy by arranging transportation out of the country or providing information and pills so they can safely self-abort.

Unfortunately, there are a few U.S. women who self-aborted or suffered miscarriages and were arrested, jailed and convicted. Most are women of color. If Roe is eviscerated, many more will be prosecuted for infanticide or manslaughter like their Salvadoran sisters.

Throughout the world, whether the right-wing and authoritarian government is in charge, or whether there is a more liberal agenda, society feels it is necessary to have special rules for abortion procedures. Instead, we assert that abortion is a medical procedure and needs no special set of rules.

Some pundits ask why there can’t be a “reasonable compromise” on abortion rights. Actually, there has been too much “compromise” over the decades since Roe, as the right wing — and frankly, some liberal centrists — have implemented restrictions.

True, 91% of all abortions take place before 13 weeks, but why should the door be shut on the 9% unable to schedule an appointment early enough, make the necessary arrangements, get the money together or discover an unforeseen problem?

The right’s great propaganda victory came with the passage of the federal law banning a medical procedure for the handful of late-term abortions that only happen in cases of medical emergency or extraordinary tragic circumstances. What all the laws and regulations do is create the conditions where abortion is less accessible and more costly.

The end of Roe either officially or in practice under the current malignant Supreme Court majority will not end the struggle for reproductive justice. There will be defiance by multiple means, including assistance to women in need of abortion, speakouts, demonstrations, pickets, and civil disobedience.

There’s simply no room for retreat or even a simple hold-the-line program. Instead, it is time to assert the dignity in all reproductive decisions and society’s obligation to support those decisions. Anything less is a deadly injury to women and a menace of multiple injuries to all.