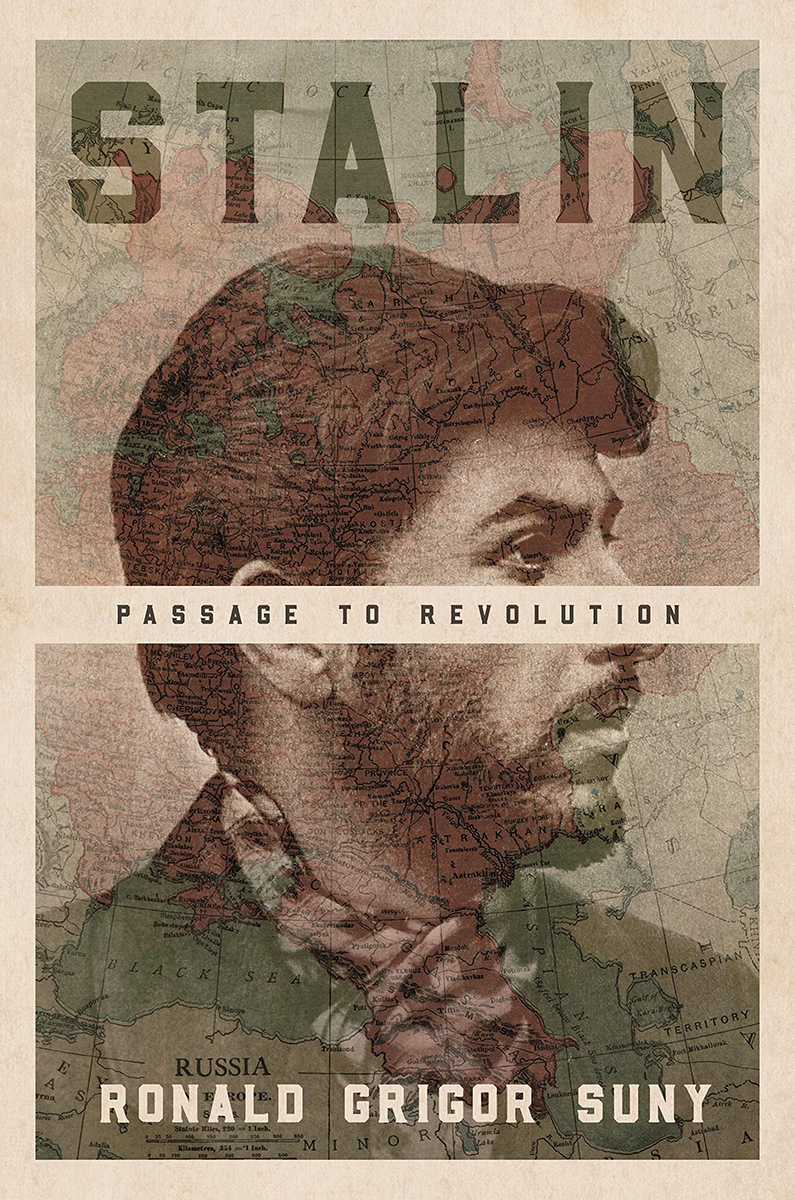 “Consider the improbability of Ioseb Jughashvili, a small, wiry child whose affections circled around singing, wrestling, poetry, Georgian Orthodoxy, and nationalism, who could have died from typhus or Siberian frost or a well-aimed bullet, but who was lifted through adversities and reversals to the pinnacle of power in a faltering revolutionary state” (705).

IT IS THE first leg of this improbable journey that is recounted by Ronald Suny in his recent massive biography of the young Stalin — a work for which the author has justly received the prestigious Isaac Deutscher Memorial Prize. Suny, the William H. Sewell Jr. Distinguished University Professor of History at the University of Michigan, is a prolific scholar who has written extensively on the history of the Soviet Union and especially on the South Caucasus.(1)

It was Suny’s focus on that region, together with his deep interest in “Marxism, and especially the damaged and distorted history of Russian social democracy and particularly Bolshevism” that first drew him to this project over 30 years ago.(2) But it was the subsequent opening of archives in Russia and Georgia and the recent availability of memoirs that enabled the completion of this remarkable study.

In a historiographical essay at the end of the book, Suny notes that many Western biographies of Stalin have concentrated almost entirely on psychology in their elusive search for the single key that would explain their subject’s drive to power and brutality. Others, focusing largely on context, have failed to take Stalin’s emotional and intellectual development seriously.

Avoiding both extremes, Suny  explores Stalin’s psychological evolution, treated as “the interplay between the boy from Georgia’s developing character and the social and cultural environments” through which he moved. (4) What he has produced is more than a biography; it’s a rich political history, informed by Suny’s own socialist sympathies, of the development of the socialist movement in the South Caucasus and throughout the Russian empire at the beginning of the last century.

Suny’s account begins in 1879 with the birth of Ioseb (Soso) Jughashvili to the poor Georgian shoemaker Beso Jughashvili, and his religious wife Keke Geladze, in the small village of Gori. Initially sickly, young Soso grew to be athletic, especially adept at wrestling and boxing as well as singing.

From an early age he knew the abuse of an alcoholic father. Many biographers have seen this as decisively shaping Stalin’s later development. But for Suny, an even greater influence was Keke’s indomitable ambition which, combined with her son’s significant abilities, achieved Soso’s admission to the Gori church school and then to the Tiflis Theological Seminary in the Georgian capital.

Through his first two years at the seminary the deeply religious Soso consistently earned high marks while simultaneously writing poetry for nationalist Georgian journals. However, Suny observes, “the Tiflis Seminary  proved to be as much the crucible of revolutionaries as for priests.” (61)

With the other Georgian students he suffered the contempt on the part of the Russian priests for his Georgian language and culture, and discrimination for his peasant status and provincial origins.

Consequently, in his third year Soso was drawn to study groups for the reading of forbidden literature, including the works of Marx and Engels. Quickly, his commitments shifted from religion to revolution, and he affiliated with the underground Social Democratic movement.

With his expulsion from the seminary in 1899 — allegedly for missing his final examinations — Soso expanded his activities as a professional revolutionary, meeting regularly with workers in conspiratorial centers in Tiflis and organizing new centers in the steamy port city of Batumi. He also wrote articles for socialist papers, helped set up clandestine printing presses, advised striking workers, and organized demonstrations.

His performance in these activities received mixed reviews. Suny notes that those who worked most closely with Soso perceived him to be “a man of the people, simple, direct, and deeply committed to the workers.” (169)

But his radicalism and outspoken criticism of the leadership increasingly brought him into conflict with the Marxist veterans, and especially their leader Noe Zhordania. To them, Jughashvili was a reckless intriguer. From Suny’s account, aspects of both images seem to have been accurate.

An indication of Soso’s recklessness was his vigorous advocacy of a demonstration outside the Batumi prison in March 1902. In the ensuing massacre 13 workers were killed and dozens more wounded. The demonstration also resulted in Jughashvili’s own apprehension by the police and exile to eastern Siberia.

On his return to the Caucasus, Soso — who was calling himself “Koba” after the hero of a Georgian novella — found a Social Democratic organization rent by factionalism. The Second Congress of the Russian Social Democratic Workers’ Party (RSDRP) in 1903 had divided into Lenin’s Bolshevik majority, which advocated a party “more closely identified with the organization of Social Democratic professionals,” and Julius Martov’s  Menshevik minority, which “wanted the party identified with the labor movement more broadly.” (187)(3)

Within Georgia a large majority of socialists, including Koba, initially endorsed the Bolshevik position. Suny tells us that for Jughashvili this was almost inevitable considering his “elevated sense of the role of leadership in the generation of political consciousness.” (202)

In the following years the Georgian Mensheviks succeeded in winning over the majority of Social Democrats, largely by convincing workers that the Bolsheviks advocated dominance of the movement by intellectuals. However, Koba stuck with the Bolsheviks, devoting considerable energy to the party struggle, and emerging as a leading figure within his faction.

In most biographies of Stalin, the turbulent period of the 1905 revolution and immediately after has appeared as a “blank space.” Suny demonstrates, however, that in these years Koba was fully engaged in the inner party struggle while writing extensively for the Bolshevik press and leading a clandestine armed band.

In that period both the Bolsheviks and the Mensheviks in the Caucasus organized armed combat units of workers and peasants to resist the attacks of the army and police. Over time, these metamorphosed into guerilla bands that carried out assassinations of enemy officials and robberies to finance the struggle.

Koba certainly helped organize both robberies and assassinations. However, Suny argues that his involvement in the most notorious of these actions — the sensational robbery in Tiflis of the state treasury — was only “peripheral.” (364)

Baku and the National Question

In light of the Menshevik domination of the party in Georgia, in June 1907 Koba relocated to Baku (the present capital of Azerbaijan — ed.), the oil center on the Caspian Sea. There, the revolutionary upsurge of 1905 had opened possibilities for a legal labor movement.

Taking advantage of this opportunity, many party activists plunged into open labor activity. However, veteran “committeemen,” including Koba, resisted this trend, and continued to focus on underground work, including factional infighting. Koba’s abrasive style, questionable methods and intense competitiveness generated tensions within his own faction, but his efforts helped win Bolshevik dominance in Baku.

Ultimately, the successes of the labor movement drew even Koba into trade-union activity. Suny notes that these years were among the few in which he involved himself directly in the daily economic struggles of the working class. But the experience seems to have affected him greatly and to have influenced his position regarding debates within the broader party.

In this period “liquidators” among the Mensheviks argued for abandoning underground work, while “recallists” among the Bolsheviks were rejecting work in legal institutions and demanding a recall of their delegates from the Russian Duma.

As an underground veteran, Koba immediately opposed liquidationism, but he also enthusiastically joined Lenin in advocating full use of all legal opportunities “from the floor of the duma and the trade unions to cooperative societies and burial funds.” (426)

Koba’s activity in the Caucasus ended abruptly with his arrest in March 1910 and exile again to Siberia. But after his release, a broader arena opened when in early 1912 he was coopted by the Bolshevik leadership to serve on the Central Committee.

Assigned to serve as a roving agent working with local activists throughout Russia, he also assisted with the editing of the new Bolshevik paper Pravda while writing for it and other publications. It was at this time that the pseudonym “Stalin” — or “man of steel” — first appeared in the pages of Sotsial-Demokrat.

Following another arrest and escape, Stalin was assigned the additional duties of organizing the Bolshevik elections to the Duma and guiding the activities of the Bolshevik deputies. By January 1913, he “had joined the inner circle of the Bolshevik faction” and was now “one of Lenin’s chief lieutenants.” (505)

In that capacity he was assigned by Lenin to write a major statement on the problem of nationalities. At this time the “national question” was hotly debated by socialists throughout the empire and internationally.

Socialists on the far left opposed any concessions to nationalism; groups on the right subordinated the struggle for socialism to national needs; and between the extremes were those who advocated national cultural autonomy. Rejecting all these positions, Lenin advocated regional autonomy and the right to self-determination — including the right to secession — for all national groups.

This was the position that Stalin defended in his “Marxism and the National Question.” The work was later depicted by Trotsky as wholly inspired by Lenin, written under his supervision, and edited by him — an evaluation that for Suny, though “ungenerous,” captured  Stalin’s “intellectual, if not editorial, indebtedness to Lenin.” (531)

Stalin’s final arrest in late February 1913 and four-year exile removed him from the leadership of the Bolsheviks and their debates concerning the First World War. Suny notes Stalin’s own antiwar and internationalist position, but suggests he did not fully support Lenin’s radical call for Russia’s defeat.

If so, it was one of several issues on which he disagreed with Lenin. Another was his position regarding the Provisional Government in 1917.

Freed from exile by the February Revolution, Stalin returned to Petrograd where he took a seat in the Bolshevik Russian Bureau. There, while expressing distrust of the Provisional Government, Stalin advocated pressuring it to end the war — a position at odds with Lenin’s opposition to any support for the government whatsoever. But Stalin quickly came around to Lenin’s position.

Because Stalin was not prominent in the public arena during the revolution, he was dismissed by the Menshevik historian Sukhanov as a “gray blur.” Beyond that, later biographers have even characterized him as “the man who missed the revolution.”(4)

Suny makes a strong case that this seriously understates Stalin’s significance. Although he was neither a popular orator nor a great strategist, his contributions in 1917 were major. These included key articles in the Bolshevik press, a variety of important political assignments, his responsibilities in crucial negotiations, and perhaps most significantly his pivotal role as the central leader of the Bolshevik party during the summer of 1917 when Lenin, Zinoviev, Kamenev and Trotsky were in hiding or jail.

Likewise, we might say the personality and politics of Stalin in 1917 as described by Suny contained many different seeds, only some of which contributed to the growth of the noxious weed we know as Stalinism.

It would take years of decisions, actions, events and influences to nourish those seeds and destroy others. And it would take a variety of additional factors, external to Stalin, to promote that development.

That is another story — one we hope Suny will write. Elsewhere he has stated, “Maybe, if I live long enough, I’ll write the second volume. We’ll see. Inshallah.”(6) Inshallah indeed.