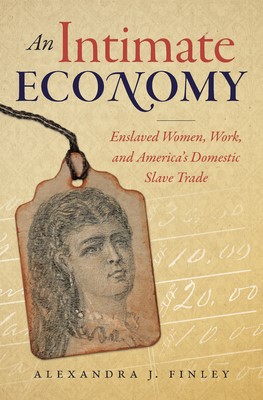 AN INTIMATE ECONOMY: Enslaved Women, Work, and America’s Domestic Slave Trade, by University of Pittsburgh historian Alexandra J. Finley, examines the economic contributions of enslaved women between 1840 and 1861 in Richmond, Virginia and New Orleans, Louisiana where two of the largest slave markets were located.

While the extensive economic studies of this time period have been dominated by men, the economic value of work performed by women has gone unrecognized. The book’s focus is largely on domestic and socially reproductive work as well as the sexual economy.

The book is divided into four chapters corresponding to the four case studies Finley is exploring. “Fancy” is about how lighter-skinned enslaved women were marketed for their attractiveness and fertility and looks specifically at the life of Corinna Hinton Omohundro. “Seamstress” shows how women produced the clothing worn by slaves in the slave markets and how well-dressed slaves could command higher prices.

Purchased as a “fancy” at 14, she contributed to Omohundro’s livelihood by providing food and clothing to the slave jail, managing boarding houses and raising her own children. After Omohundro’s death in 1864 there was a court battle over his estate, which he had willed to Hinton. The courts, mostly in Pennsylvania where Omohundro owned property, did not accept that Hinton was his legal wife and entitled to his property.

Sarah Ann Conner, a slave in New Orleans, was able to save money for herself by renting, furnishing and then subletting rooms. For unknown reasons, she brokered her freedom purchase through Theo­philus Freeman. She lived as a free woman for several years but, when Freeman went through bankruptcy, creditors went looking for hidden property and that included Sarah Ann Conner.

Many legal battles followed and in 1851, the Supreme Court found in her favor. However, her legal problems were not over. She was later convicted of perjury and sentenced to five years hard labor but it is not known whether or not she served that sentence.

She continued renting rooms, had a long-term relationship with a police officer, and eventually moved to Washington, D.C. where she had relatives. She adopted a daughter there and purchased property.

Slave trader Hector Davis regularly paid women for sewing and his ledgers tell an interesting story. Slaves were given “sale suits” for their sale in the slave markets and the sewing was performed by women. By the 1840s ready-made suits were available for men. Northern manufacturers marketed the suits in the south and there were southern manufacturers who also marketed suits. This was the most expensive option.

Another option was pre-cut cloth that just needed to be sewed. The final option was to buy cloth and pay someone to cut and sew the suits. Davis made regular payments to Anna Davis, the wife of one of his agents, for sewing. He also made regular payments to Virginia Isham, an enslaved woman, for sewing. Not surprisingly, he paid Isham considerably less than he paid to Anna Davis.

In one of the author’s more notable asides, she explains that although by the mid-19th century sewing was considered a task for women stemming from their “natural” ability, that had not always been the case.

Lucy Ann Cheatham was purchased by John Hagan, who brought her to New Orleans where she became his enslaved concubine. She had a daughter who was known as Dolly but who, unbeknownst to her husband, she named Frederika Bremer Hagan after a Swedish anti-slavery reformer.

Lucy had three other boys before Hagan died in 1856. He had emancipated her and his children shortly before his death. He bequeathed to her ten thousand dollars and a small property which was a tiny portion of his estate, the rest of which went to his mother and siblings.

The will was not contested, possibly because of how little Cheatham was given. She ended up in bankruptcy by 1863 but was able to rebuild after the war.

Cheatham had lifelong, meaningful friendships with other women who were similarly situated. There is no evidence that Sarah Ann Conner and Lucy Ann Cheatham knew each other but we find out, in the epilogue, that when Finley went to visit the graveyard where they are buried, she discovered that they are buried beside each other.

Finley consciously chooses the term “enslaved concubine” in order to emphasize the lack of choice in these relationships. She grapples with the issue of love and consent by trying to move beyond the debate to consider the specific realities of the lives of enslaved concubines:

“According to the logic of nineteenth-century contract law, enslaved concubines could not consent to a sexual relationship; yet white slaveholders fetishized their willingness. Faced with severe violence or other punishments, enslaved concubines faced a “choice” that was no choice at all. The men who enslaved them could thus create the appearance of choice for enslaved concubines. Historians must be careful not to interpret enslaved women’s survival strategies and lack of options as consent. Trapped in impossible situations, enslaved concubines in the slave trade prioritized survival while still resisting in subtle but meaningful ways.” (11)

Finley’s exposition and exploration of the phenomenon of “fancy” women is possibly the strongest part of this book. “Fancy” women were given expensive clothing, jewelry, gloves and stockings and were meant to approximate white women but were sexually available to white men and could be used and discarded.

From the racist privileging of lighter-skinned enslaved women to the assumptions around the sexual availability of these women to the delusions of consent, this intriguing topic could easily be a book on its own.

The organization of the book is somewhat problematic to the extent that the content of the chapters does not correspond well with the chapter titles. All three women were enslaved concubines who performed domestic work which including sewing. There is not much in the chapter “Housekeeper” about the particulars of domestic work. Only “Seamstress,” which focuses on an individual slave trader’s logs recording payments to different women for sewing services, is able to develop the named topic. Perhaps it would have been better to tell these women’s stories in a different way, rather than trying to assign a theme to sum up their lives.

Without elaborating, Finley dismisses Marx and Engels for “quickly abandoning a materialist inquiry of women and relying on familiar assumptions about female nature.” (9) She is kinder to Marxist feminists such as Mary Inman and to other feminist thinkers.

The central thesis of the book regarding the economic value of the work performed by enslaved women is asserted throughout the book but not developed sufficiently. There is heavy reliance on ledgers of transactions by slave owners. What does this information tell us? It’s only possible to extrapolate so much.

The women whose lives Finley examines are interesting in their own right, but there is not much connection between what little we know about them and what we might glean about the economic value of the work they did.

Finley deserves credit for choosing to highlight arguably one of the historically most oppressed groups. Instead of focusing on their oppression, she looks at what they contributed in terms of economic, social and emotional labor but also, under the most dire circumstances, at their small acts of resistance which can inspire all of us who are fighting for a better future.