“When feminism does not explicitly oppose racism, and when anti-racism does not incorporate oppposition to patriarchy, race and gender politics often end up being antagonistic to each other, and both interests lose.”
—Kimberle Crenshaw 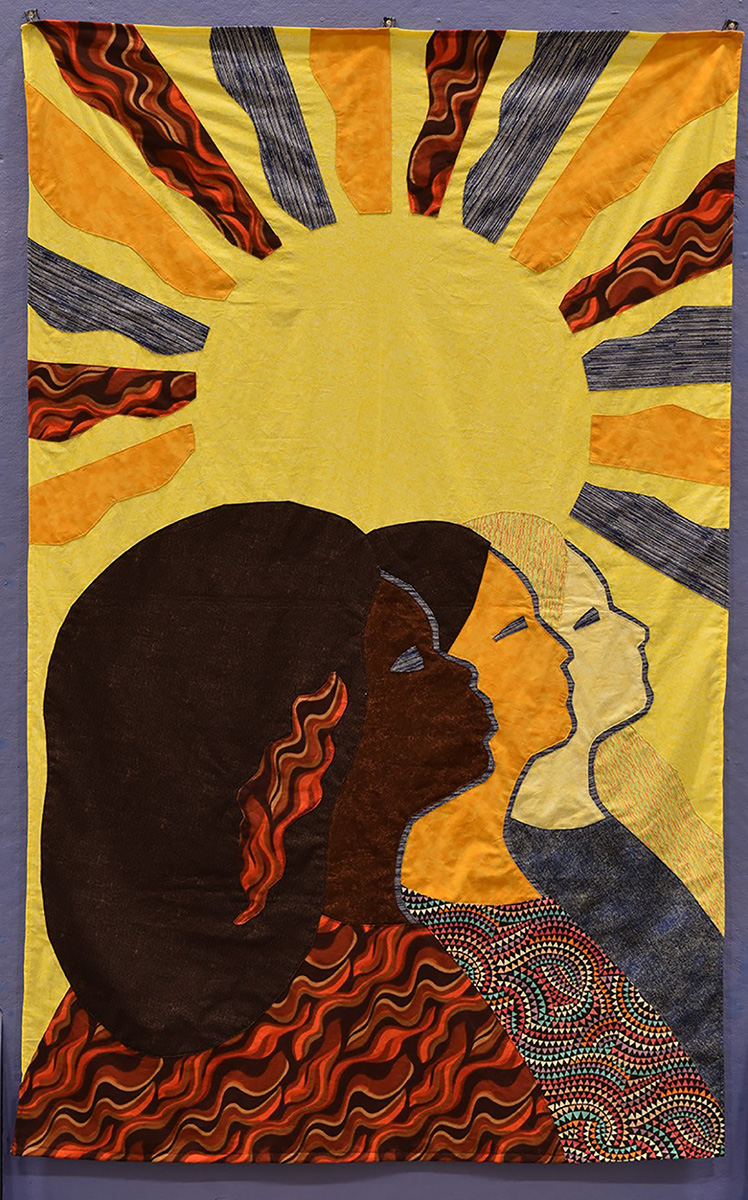 Oksana Briukhovetska’s graphic is a contemporary remake of Soviet posters of the 1960s. She reversed the order of the women to highlight the role of black women in the world.

AS A BLACK and working-class mom when my children were first born, I spent time in activist spaces and organizations that seemed to have made a conscious decision to ignore the concerns of working-class families and children. Many members seemed to have adapted the neoliberal “it’s not my fault you had kids’’ mentality, self-righteously asserting that they refuse to bring kids into such a messed-up world and creating an unwelcoming and toxic environment for the folks who did have children.

Meanwhile, these organizations did not discuss or advocate for “family-friendly” policies that would benefit the society at large such as family leave, health insurance, a better education system, and affordable childcare.

I’ve also been involved with environmental and anti-capitalist organizations that ignored racial justice and where members perpetuated racist microaggression after racist microaggression. I’ve been in sexist and heterosexist racial justice spaces in which women’s rights were seen as a “distraction” and in which women were sexually harassed within the ranks.

I’m always disappointed when justice organizations perpetuate one form of oppression while preaching about another.  To fight one injustice and practice another is proof that the divide-and-conquer tactics imposed upon us by those at the top are working.

As we celebrate Women’s History Month 2022, the terms “intersectionality” and “intersectional feminism” are phrases that we hear more commonly in policy discussions, activist circles, and beyond. Yet often, the roots of the terms are unexamined or even co-opted and whitewashed.

Frequently, we fail to practice intersectionality within our movements. It’s important to remember the background, context, and importance of intersectionality and intersectional feminism, which began with a pattern of court cases that failed to grant Black women any legal protection.

Intersectionality is a framework for analyzing how overlapping aspects of a person’s identity result in compounded experiences of oppression.

Sojourner Truth and, later, Ida B. Wells spoke up against the oppression and exclusion that Black women faced, advocating for Black freedom in general and Black women’s right to vote in the midst of a largely anti-Black women’s suffrage movement.

In the 1970s, the Combahee River Collective denounced the racism, sexism, heterosexism, and exclusion that they experienced as queer Black women in Civil Rights and feminist organizations. Countless BIPOC (Black, Indigenous, People of Color) women and gender diverse people have fought multiple oppressions at once while having their unique concerns ignored by mainstream movements.

Kimberle Crenshaw coined the term “intersectionality” in 1989. Crenshaw’s prominent career in legal practice, teaching, and research led her to notice a pattern of court cases that failed to offer any legal protection to Black women specifically.

The U.S. legal system is rooted in white supremacy and patriarchy and has never protected Black women or Black people in general. Crenshaw pointed out the specific ways the legal system fails Black women by failing to address the intersectionality of gender and race.

Through her research, Crenshaw highlighted how the law only protected Black women as “minorities” or as “women.” Both aspects of an African-American woman’s identity were not protected simultaneously; they could not be protected as Black women because African Americanness and femaleness were (and often still are) treated as mutually exclusive.

Crenshaw’s work provides examples of Black women who lost legal battles because the courts believed that protecting them as Black people and as women was a form of unfair “super-protection.”

In the case of DeGraffenreid vs. General Motors (1976), five Black women sued GM because they believed that they faced unfair discrimination as Black women. Because Black women were not hired at the company before 1964, a seniority-based layoff caused all the Black women who were hired after 1970 to lose their jobs.

The plaintiffs could not claim sex discrimination because they were in a unique situation that the white women employees did not experience. However, the court rejected the plaintiffs’ attempt to bring a suit as Black women in particular, rather than on behalf of African Americans or women as separate categories.

The U.S. District Court for the Eastern District of Missouri decided that:

“Plaintiffs have failed to cite any decisions which have stated that Black women are a special class to be protected from discrimination . . . this lawsuit must be examined to see if it states a cause of action for race discrimination, sex discrimination, or alternatively either, but not a combination of both.” U.S. District Court for the Eastern District of Missouri — 413 F. Supp. 142 (E.D. Mo. 1976)

In another case, Moore vs. Hughes Helicopter, Inc. (1983), the United States Court of Appeals for the Ninth Circuit ruled that a Black woman “could not use statistics reflecting the overall sex disparity in supervisory and upper-level labor jobs because she had not claimed discrimination as a woman but ‘only’ as a Black woman. The court would not entertain the notion that discrimination experienced by Black women is indeed sex discrimination.” (Crenshaw, Demarginalizing the Intersections of Race & Sex,

This assumed mutual exclusivity of gender and race has forced Black women to choose between their intersecting minoritized identities: to claim discrimination as women or as African Americans, but not as both.

If they claimed discrimination based on their combination of race and gender, they risked not being protected under the law. These cases prompted an examination of intersectionality not only in the legal sense, but also in the countless other experiences in which people with multiple oppressions are not protected or represented.

With this background in mind, the notion of intersectional feminism challenges feminist movements that historically centered heterosexual middle-class white women.

In our movements, it’s important to continuously ask ourselves how we are showing up for people who simultaneously experience racism, sexism, heterosexism, classism, neocolonialism, imperialism, ableism, and the myriad other systems of oppression.

Without intersectional frameworks within social movements, marginalized people will feel alienated and excluded, and the movement itself will be weaker.

Audre Lorde said: “I am not free while any woman is unfree, even when her shackles are very different from my own. And I am not free as long as one person of Color remains chained.”

Our movements are stronger when we move beyond generic inclusivity principles and dry anti-racist statements without actually doing the work.

A good place to start is to ask yourself: how am I showing up for BIPOC, for queer folk, for gender non-conforming folk? How am I working against anti-Blackness, against sexual harassment, and against environmental devastation decimating the poorest communities?

Dr. Martin Luther King Jr. said that “injustice anywhere is a threat to justice everywhere.” In light of this women’s history month and beyond, let’s keep this principle in mind by actively embodying and practicing intersectional feminism in all of our movements.