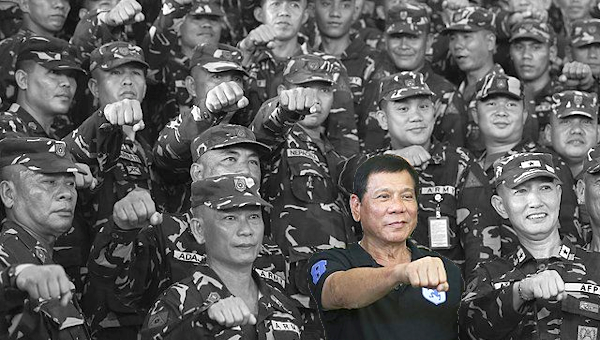 Representative Susan Wild (PA) has introduced this vital bill and efforts continue to enlist supporters in the U.S. House of Representatives and the Senate.

The International Coalition for Human Rights in the Philippines, the Communications Workers of America, the AFL-CIO, and many other church and community organizations are supporting the PHRA initiative.

Sadly, the Biden administration and U.S. Congress continue to approve billions of dollars to the Pentagon and to authorize funding for military aid to corrupt, authoritarian regimes such as in the Philippines.

In the 2019 federal budget, according to the War Resisters League, 27% of revenues went to military uses ($857 billion) with another 20% ($644 billion) for past wars, including interest on the national debt.

That pattern continued in 2020 and 2021. That’s nearly half of the total U.S. government’s budget, leaving much less for human needs and services, unemployment assistance, health care, education, infrastructure repair, and environmental protection during the COVID pandemic.

Especially disturbing and obnoxious are the monies given to governments like the Philippines which are used to repress their citizens. In 2021, nearly $2 billion in arms purchases from major weapons manufacturers — Boeing, Lockheed Martin, Bell Textron and General Electric — went to the brutal and murderous regime of Philippine president Rodrigo Duterte, and Congress failed to halt these deals.

U.S. direct military aid to Duterte’s regime totaled over $193.5 million in 2018, in addition to other forms of military aid. Since 2016, the year when Rodrigo Duterte was elected Philippine president, the U.S. has sent over $550 million dollars in military aid to the Philippines.

During Duterte’s term in office nearly 300 Philippine journalists, human rights lawyers, trade unionists, peasant leaders, community organizers and environmentalists have been assassinated. In fact, the Philippines is second globally only to Brazil in being the deadliest country for environmentalists.

Duterte is widely and justifiably vilified for his barbarous “War on Drugs” that is estimated to have resulted in the summary non-judicial executions of nearly 30,000 individuals in poor communities by police and government-sponsored vigilantes.

Duterte, in response to the COVID-19 pandemic, has used the crisis to further militarize the country and repress labor and people’s organizations, and his police and military have even arrested individuals delivering relief and food to those in need.

This militarization has worsened the public health situation for millions of Filipinos, leading to the jailing of hundreds of political prisoners, many of whom are farmers, trade unionists and human rights advocates.

With Duterte’s recent signing of the Anti-Terror Law which he pushed through the legislature, the country is under virtual martial law. The new measure gives huge discretion to Duterte in defining what a terrorist is and imposes severe penalties on individuals and groups targeted by the Duterte regime.

Because of the Philippine government’s militarized and repressive response and the lack of financial aid, testing, adequate health care, food and services, the Philippines has one of the highest numbers of Covid-19 cases in the region, and the situation is worsening. International aid and food assistance are urgently needed rather than wasteful military spending.

Urge Passage of the PHRA

In May of this year, Filipinos will elect a new president, but some of the leading candidates, like the son of former Philippine dictator Ferdinand Marcos, are not likely to make any changes in the deplorable human rights situation.

We need to urge Congress to support the Philippine Human Rights Act (PHRA) and to oppose any further assistance to the Philippine military and police. Our tax dollars can be better used for pandemic relief efforts at home and in other countries overwhelmed by the global disease.

This would be a truer measure of national security rather than giving funds to dictators and human rights violators.