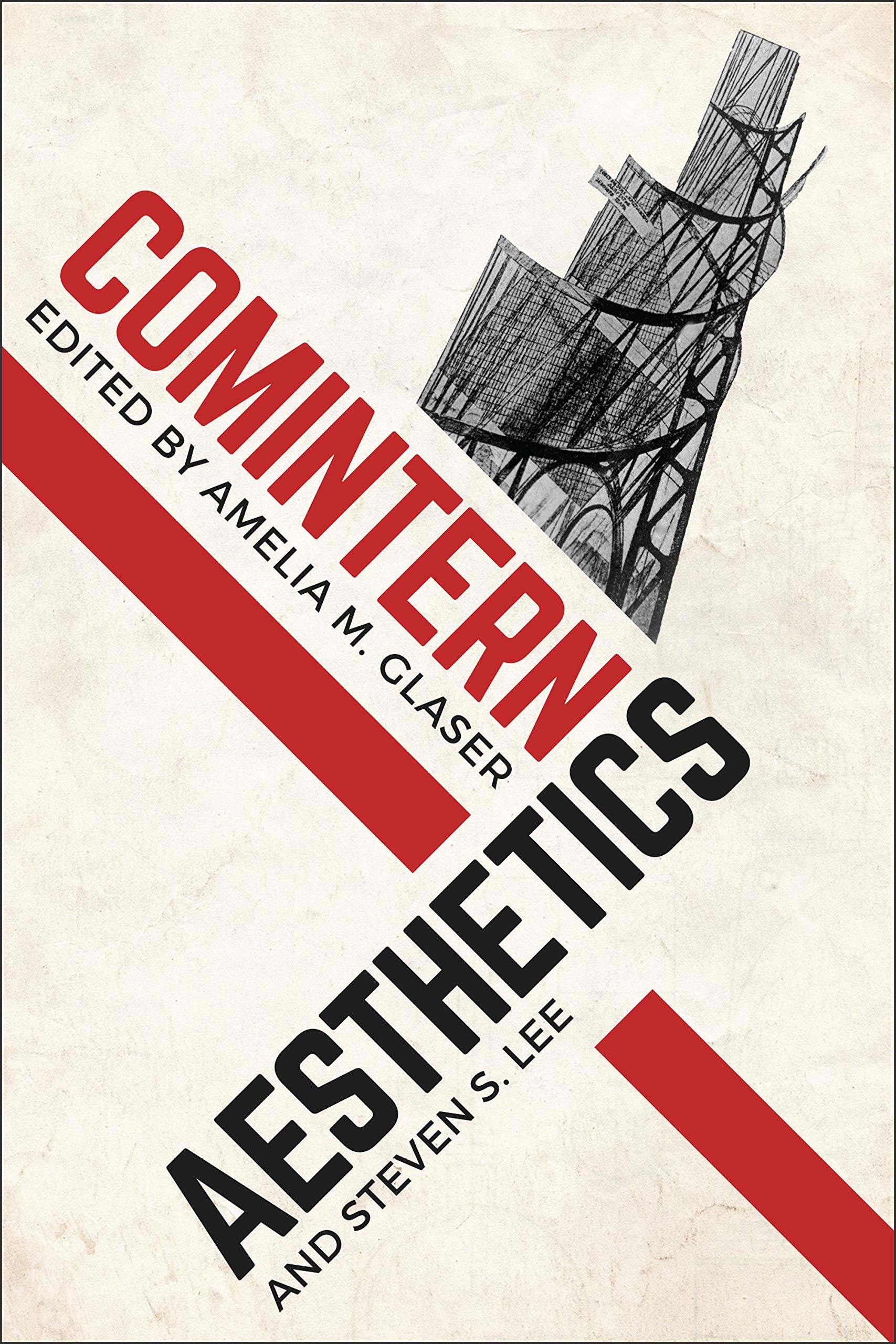 IN 1919 THE Soviet avant-garde artist Vladimir Tatlin designed a monument to the Third (Communist) International, a grand, slanting helical tower that was also intended to house the Comintern’s headquarters in St Petersburg.

The structure was never built, but its design endures as a symbol for the meeting place of aesthetics and politics, and for the unrealized dream of world Communism.

It is fitting, then, that Tatlin’s Tower serves as the central figure of Amelia Glaser and Stephen Lee’s collection, Comintern Aesthetics. The volume brings together a wide range of scholars on literature, visual art, film and performance produced during and after the years of the Communist International (1919-1947).

Like Tatlin’s Tower — and like the artist Ai Weiwei’s 2007 rendition of the tower, discussed in the introduction — Comintern Aesthetics carries a message of hope, an optimism for the possibility of a better world.

While the popular view of the influence of Soviet Communism on cultural activity emphasizes top-down political control and artistic judgment in accordance with a revolution gone horribly astray, the essays in this volume document a more complicated story.

While a drive toward centralization and repression was increasingly present in both the USSR and the movement it led, it was by no means totalizing. Cultural workers in different parts of the world adapted, interpreted and sometimes subverted official policies to meet their own needs. They continued after the Comintern’s demise to persist with artistic forms they thought would free humanity from exploitation and oppression.

The volume as a whole, a collection of academic essays — each with its own argument relevant to its sub-field — makes several key interventions into discussions of world literature, aesthetic categories such as realism and modernism, and the historical legacy of the Comintern.

Beyond the Center-Periphery Model

Over the last 20 years or so, studies of world literature have been heavily influenced by various iterations of “world-systems theory.” A broad and complex collection of ideas within the realm of sociology, world systems theory — as most notably articulated by Emmanuel Wallerstein — offers an understanding of global capitalism premised on the relationship between centers and peripheries, metropoles and colonies.

Proponents of world-systems theory within literary studies, such as Pascale Casanova and Franco Moretti, have adapted the center-periphery model to discussions of world literature. For Casanova, for example, Paris was in many historical periods the center of the “World Republic of Letters,” sometimes but not always aligning with the political or financial world “center.”

Such models help us to understand how Eurocentrism continues to operate within the literary realm, as work from the periphery (post-colonial or so-called third world literatures) is either dismissed or acknowledged based on its ability to adhere to conventions defined and maintained by cultural elites in the metropole.

But as powerful as such models can be, they can have the unintended effect of reifying and reinforcing European cultural dominance. In recent years, critiques of center-periphery models have mounted, showing that they obscure the rich networks of cultural transmission occurring between peripheries, and not just between periphery and center.

Recent scholars have argued that the networks produced by periphery-to-periphery exchanges are key to growing power in the Global South in ways that are not mediated through the European (or American) metropole.

Comintern Aesthetics joins this discussion, positing an alternative world system, one centered on Moscow and the Comintern rather than on the capitalist world centers of the West. By “eschewing models of world literature that, by typically foregrounding the West, tend to mirror the flows of capital and empire,” the collection allows for new and productive conversations between what may seem unlikely artistic contexts.

Toward this end, part one of the book, “Space, Geopolitics, Networks, Translation,” addresses several unconventional literary-geographical configurations. Katerina Clark writes about cultural transmission between Berlin, Moscow and Shanghai in the wake of the 1927 Shanghai massacre.

Other essays in the section address the influence of Soviet art forms on the films of the Spanish Civil War, Brazilian modernism, and literatures of South East Asia. By assembling these essays, the volume enacts its goal of “remap[ping] world literature and culture from the perspective of world communism,” de-centering the West to produce an alternate model for understanding world literature.

Literary scholars tend to distinguish between two major aesthetic modes of the 20th century. Modernism is typically defined by experimentation, abstraction and difficulty; on the other hand, realism tends to employ unstylized or “straightforward” prose to describe an objective reality.

This stylistic rivalry has a political dimension, since the modernism/realism divide maps — albeit imperfectly — onto another perceived dichotomy, between art and propaganda. In both of these binary pairs, the academy tends to exalt the former, valuing the aesthetic experimentation and abstraction of the modernist avant-garde while often disparaging realism — and the subset of Soviet Realism in particular — as didactic, propagandistic, bad art.

While it may be obvious that these categories are far from air-tight — in addition to coming with their own set of historical baggage — the modernism/realism distinction remains a key organizing principle for literary studies that is surprisingly tricky to escape.

The second section of Comintern Aesthetics seeks to destabilize this divide. The set of aesthetics it tracks “encompasses multiple forms and contexts, and exceeds both the realism-versus-modernism debate and the East-West binary grafted onto it during the Cold War.”

Building on a long tradition of Marxist aesthetic theorists such as Ernst Bloch, Berthold Brecht, and more recently Fredric Jameson, the volume solves — or rather “side-steps” — the modernism/realism divide by defining realism as capacious enough to include both.

In Jameson’s words, realism is not a discrete “artistic and formal category” but rather an “idea governing the relationship of the work of art to reality itself, characterizing a particular stance towards it.” In other words, an aesthetically experimental work (think of Virginia Woolf’s Mrs. Dalloway), is no less a work of realism than a typically “realist novel” — say, Upton Sinclair’s The Jungle. Both attempt to render reality, albeit with vastly different aesthetic strategies.

Collapsing the modernism/realism divide allows the volume to discuss a much broader set of works under the aegis of their Comintern-inspired aesthetics. Jonathan Flatley discusses Langston Hughes — typically associated with experimental poetics — in terms of his Soviet-inspired documentary theater (such as his play, “Scottsboro Limited”) and what Flatley calls his “Black Leninism.”

Amelia Glaser shows the way that Yiddish poetry of the Spanish Civil War straddles and destabilizes the divide between experimentation and realism. Nariman Skakov discusses the very concept of the “boundary” through the works of Mikhail Bakhtin.

Through these and other essays the book argues forcefully for the need to jettison the modernism/realism divide as a dated construction which prevents the larger category of Comintern artistic production from coming into view.

The third section of Comintern Aesthetics focuses on works and artistic practices beyond the temporal boundary of the Comintern itself. This section evinces one of the volume’s key theses — that Comintern aesthetics and the revolutionary promise they represent endure today.

From Cold War material, such as Alice Childress’ columns in Paul Robeson’s magazine Freedom, to contemporary Chinese street performance, the essays of this section address the myriad ways that the Comintern influenced and affected cultural production transhistorically.

In the penultimate chapter, Katie Trumpener brings us back to Tatlin’s Tower, the top floor of which was to house radio equipment, in her discussion of media workers exiled in post-World War II East Berlin. Evgeny Dobrenko writes on the transition from the Comintern to what became known as the Cominform in 1956.

These essays bring the volume into the present, asking (and suggesting some answers) as to what Comintern aesthetics might look like today.

Comintern Aesthetics’s three sections each trouble or dissolve a categorical distinction, whether the center/periphery of a world-systems-inspired approach to world literature; the modernism/realism divide in 20th-century aesthetics; or temporal categories such as pre- or postwar.

In each case the volume attempts to supplant our current organizing principle with another: the cultural world of the Communist International. As a result, the volume enacts what Kris Manjapra has called the “socialist global ecumene,” a broad and diverse set of artists, works, and institutions organized — perhaps loosely — around the goal of revolutionary socialism.

Manjapra uses the term ecumene here in its secular sense: the most broad and inclusive version of a social or political formation (from the Greek, ecumene referred to the totality of the known world). Indeed, as its introduction suggests, the volume’s many contributions share more of a revolutionary “feeling” than anything else.

Comintern aesthetics are not necessarily an identifiable set of aesthetic practices, but rather the cultural production born of a revolutionary spirit — a spirit which seems to be shared by many of the contributing scholars, as well.

In its very ecumenical practice of inclusion (the volume verges on six-hundred pages) Comintern Aesthetics succeeds in articulating a broad and amorphous cultural formation and offers a mode of a literary-historical organization alternative to capital.