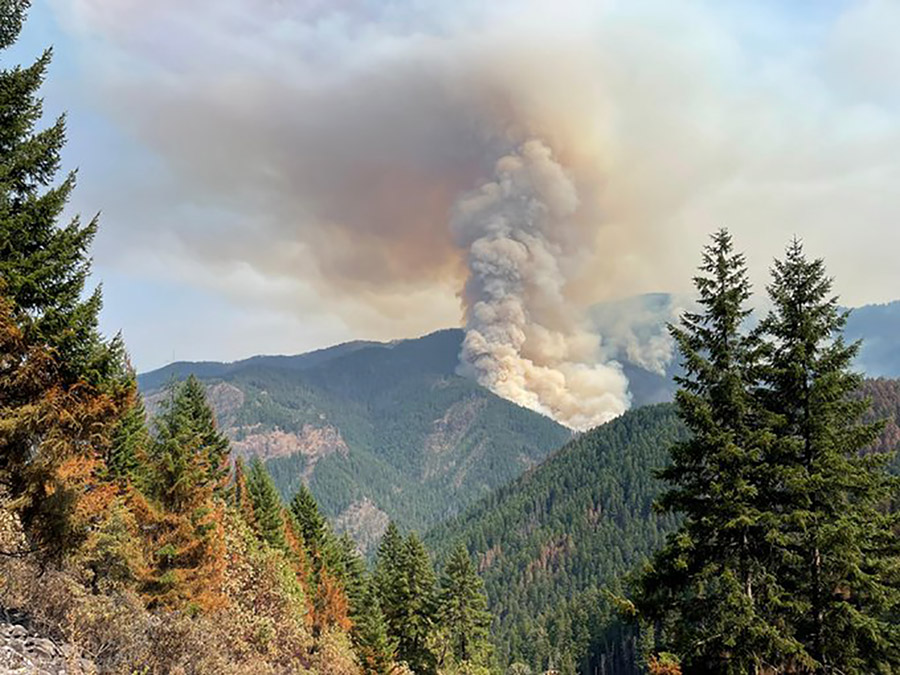 AS PEOPLE AROUND the country have seen on the news, ferocious fires are coming out of the Pacific northwest, particularly Washington, Oregon and California. Typically the wildfire season develops in August. This is what Oregonians expect and prepare for. However this year has been different. Spring was abnormally dry with low snowpack levels, adding to the persistent drought over the past 20 years.

Fires this year started in May, the earliest ever recorded. By early July, temperatures were in the nineties or triple digits for several days in towns across the state.

The Bootleg Fire, classified by InciWeb as this year’s largest national wildfire began on July 6th. Located near Bly, in south central Oregon, it bulldozed through 413,717 acres of forests, grazing and farm land.

The fire burned some 70 homes, mostly cabins. Over 2000 homes were ordered evacuated and an additional 5000 threatened. Sparked by lightning and pushed by strong winds and critically dry weather, the fire expanded up to four miles a day.

By July 18, the Medford National Weather Service Forecast Office reported that “extreme fire behavior, dry fuels and unstable atmosphere” formed a tornado in the Bootleg Fire, ripping trees from their roots. Smoke output that day generated pyrocumulus clouds rising as high as 30,000 or 40,000 feet, where commercial airplanes fly. “Prior to last year, there had been only two well-documented tornado strength vortices generated by fires,” according to Neil Lareau, from the National Science Foundation.

Strong winds carried the smoke all the way to New York City. The Big Apple looked like a smog day in the 1970s where the sun was orange.

Haze hung over New York, New Jersey and Pennsylvania. Some areas recommended that people remain inside because of the air quality. The smoke covered a large portion of the U.S. east coast.

Back in Oregon, as the inferno got closer to farms and grazing land, most ranchers released their livestock from pastures and pens with the hope that they could find safety. One rancher tracked down and recovered 95 of their animals, but an additional 45 cows and 81 calves were still missing.

Area ranchers and landowners have been euthanizing injured and dying animals. Around half of recovered animals have burned feet or eyes and one cow had died of smoke inhalation. To understand the toll the fire takes on people and animals, one rancher remarked “Apparently, if their (the cows) feet are burnt (where hooves are coming away) they don’t heal. You can’t bring them home to doctor them, so you have to put them out of their misery.”

Another rancher commented “I have been here 20 years. And I’ve fought eight fires, maybe this one is the ninth….” he said. “But nothing to this magnitude has threatened livestock before.”

The Bootleg Fire is now 100% contained after 39 days of 2400 firefighters combating the blazes. Local crews including our small community of Lincoln County who sent 14 members and the National Guard had been deployed. Teams from Utah and California were also put into action. The fire commander confronting Oregon’s third largest fire had to utilize a historic amount of resources, and deal with a coronavirus outbreak of at least nine firefighters who tested positive with mild symptoms.

Don’t think that the coast line of the state is immune to fires. Last year the Echo Mountain Complex fire reached to Otis, Oregon, an area only five miles from the ocean. The fire covered 2500 square feet in the town and destroyed half of its structures — 298 houses and 339 other structures.

The flames from this fire also jumped over Highway 101 where smoke lingered from the previous night. As a result, we had to evacuate — and we only live two-and-a-half blocks from the ocean. Luckily we were able to return the next day.

But now, many Oregonians don’t view summer as a consistently pleasant event. Instead we must be prepared to leave “as if we may never come back.”

My husband and I have our suitcases filled with necessary clothes, items for daily living like toothpaste, soap, important papers like banking information and passports. I have a list on the refrigerator to remind me what to take — our medicine pills, purse, eyeglasses, lab tops and special photos. Our car is equipped for such an emergency with water, dry food, blankets and an extra gas can.