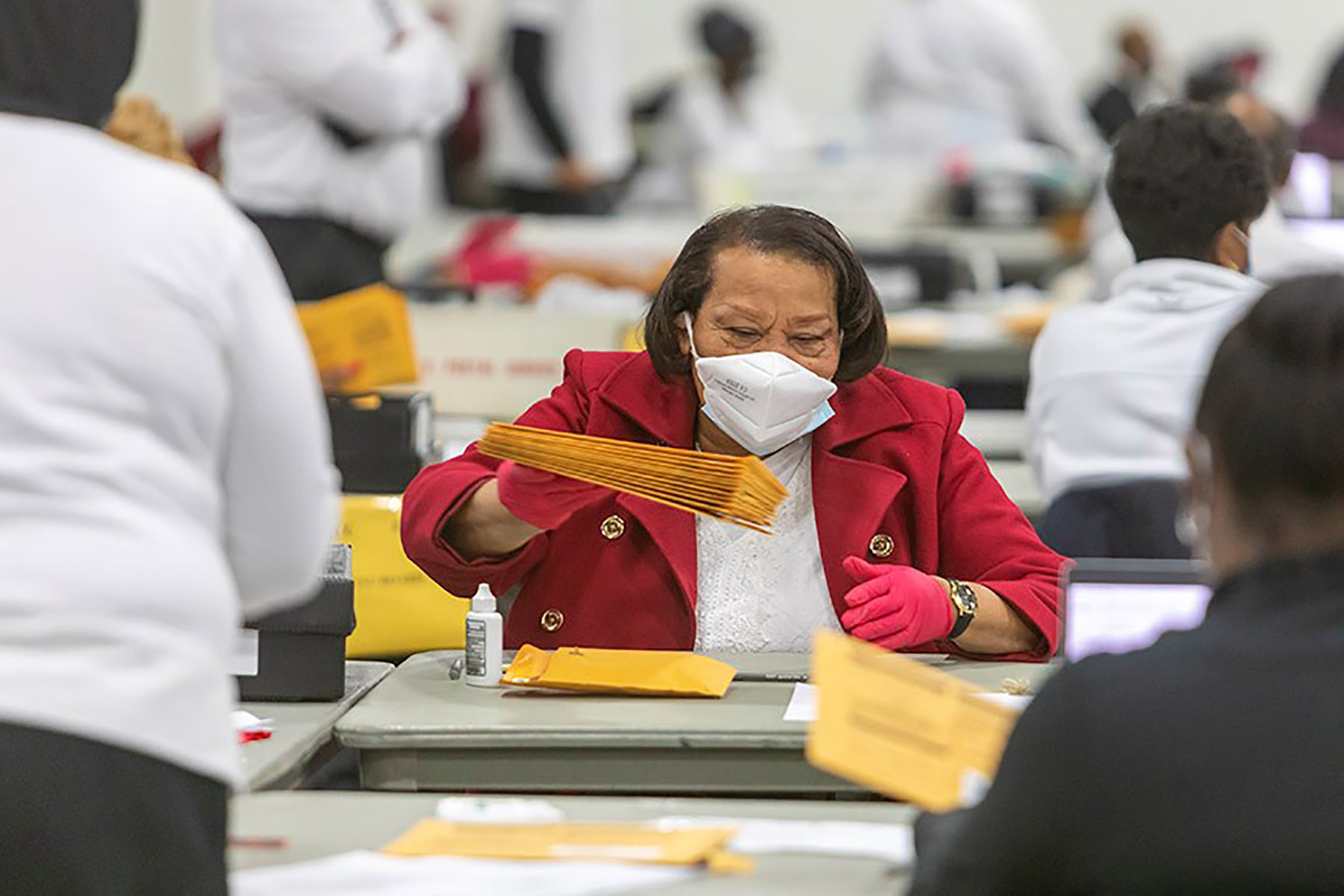 In addition to allowing more absentee voting because of the pandemic, some states had recently stipulated all who requested an absentee ballot receive one. Jim West

VOTING RIGHTS ARE under siege.

The right to vote without restrictions is an existential citizenship issue for African Americans. Other ethnic national minorities believe likewise. Progressive-minded whites also see the issue that way.

However, the Biden Administration does not. President Biden in a July 13 speech in Philadelphia attacked the Republican effort to overturn the will of the voters but laid out no action plan to stop it.

He then began a national tour to promote an infrastructure deal with Republicans that does not include defense of voting rights.

To civil rights and Black Lives Matter (BLM) leaders and other on the ground activists, this was a slap in the face. Immediately Black women took the lead in organizing protests at the Capitol and Supreme Court to demand protections for the right to vote.

Acts of civil disobedience have led to arrests; more are planned until federal laws are passed and enforced.

The arrest of these African American leaders stands in contrast to how Trump backers were treated after the January 6 insurrection, allowed to walk out of the Capitol building without handcuffs or even their names taken down by the National Guard and police.

All-Black actions, however, are not enough to stop the coordinated voter suppression efforts of right-wing state legislatures. What’s missing so far at these direct-action protests are movement allies.

The 1964 Civil Rights Act, which ended legal segregation in the South, did not only impact Blacks. The movements of Latinos, women, gay people and the disabled have all used that law to advance their rights.

These allies need to step up and participate at civil disobedience protests, as occurred last year during the anti-police violence marches after the police murder of George Floyd.

Not waiting for the Biden government, more marches and rallies are planned. These include rallies and marches on August 28, the anniversary of the March on Washington in 1963 led by Martin Luther King Jr. His son, Martin Luther King III, is one of the organizers.

In a dramatic and well-planned action, 50 elected Democratic state legislators in Texas took the unusual step to leave their state and travel to Washington, D.C, to push Congress and the Biden government to act.

Texas Democrats argue that without federal laws, hard-right Republicans will win elections with a minority of voters. Republicans will use their unchecked political power on a range of issues that harm the vast majority of working people.

Many Texas Republican officials openly say their goal is to limit the number of Democratic Party voters, especially urban Black people. In the 2020 elections, 11 million people voted and the Republican Secretary of State said only 44 voters had possibly voted in error. That person has since been removed from office.

The Texas Tribune, widely read across the state, described why the Democrats left the state:

“On July 12, Texas House Democrats packed their bags and headed for the nation’s capital in a high-profile effort to block passage of GOP-backed voting restrictions.

“Democrats hoped their exodus would break what’s called a quorum — the minimum number of lawmakers needed to conduct business — so Republicans couldn’t pass legislation that could ban drive-thru and 24-hour voting, among other sweeping restrictions” (July 14)

Texas Republican Governor Greg Abbott said the legislators, when they return, will be apprehended and brought back to the legislative body to get a quorum. Texas does not have authority to do so in Washington, D.C. where they intend to stay for a month until the “special” state legislative session closes.

Meanwhile in Arizona an ongoing fake “audit” by a Trump-allied firm continues. Trump told a rally in Phoenix on July 24 that stopping ballot fraud is the top issue for his supporters.

An Associated Press review of the Arizona ballots of the 2020 election showed only 182 “possible” ballots with issues. That’s out of three million votes cast. Only four ballots were found with a problem — two from Republicans, two from Democrats.

Crisis of the System

There is a crisis of U.S. bourgeois democracy. Because of former President Donald Trump’s big lie that he won the 2020 presidential election, 47% of Republicans say President Biden is not legitimate. Seventy-seven percent of Republicans say voting is not a right but a privilege.

The United States tells the world it’s the essence of democratic rule, calling itself a 245-year experiment. Yet for most of that history, Black, Latino, Asian and especially Indigenous peoples were excluded from the “democracy” except as super-exploited labor.

Democrats and those who disagree with Trump are seen as enemies. That’s why the January 6 insurrection occurred even though it failed. Trump is behind the effort to restrict voting.

Without effective resistance, voting rights can be restricted. After the slaveholders lost the Civil War, the country was at a crossroads. It could become a new democracy based on ideals of equality and freedom, or one based on skin color and national oppression of nonwhites.

The decision chosen was not inevitable. It could have built a society based in the original words of the Declaration of Independence authors that “all men are created equal.”

That course was rejected, because most whites did not see Black people as their equals. Racism ran deep.

The rulers decided that the newly freed citizens would not be treated like white citizens. Effective power was restored to the defeated Confederacy.

A colorblind society was never a goal before or after the Civil War. Black super-exploited labor, yes; voting rights, no.

Under the principle of “state rights” the bankers and manufacturers of the North allowed white terrorism to flourish. It was a brutal process as racist “Black codes” and then Jim Crow laws were imposed that turned citizenship hollow for former slaves.

Martin Luther King Jr expressed the hopes of African Americans: “I look to a day when people will not be judged by the color of their skin, but by the content of their character.” (From the “I have a dream” speech)

The Supreme Court’s role has been central in the recent undermining of voting rights. The Court is an unelected body with nine members, appointed by presidents, approved by the Senate, and holding lifetime seats.

Historically the court has lagged popular will and been used by the rulers to slow down or reverse changes supported by society. Typically it responds to big events before modifying positions.

The issue of voting rights has been no different. Before the Civil War, the Court ruled in 1857 in the infamous Dred Scott case that Black people could not be citizens. The Constitution’s rights only applied to whites.

“The Freedom Amendments” for example, which said Black people were citizens, were never fully implemented. The 13th Amendment, adopted in 1865, that ended slavery still allowed forced labor in prisons and thus a new form of slavery.

The 15th Amendment, adopted in 1868, said the right to vote applied to all. But, again, it allowed its implementation by state governments. The Supreme Court rejected federal oversight as a violation of “state rights” until the 1965 Voting Rights Act was enacted.

The Supreme Court in 2013 saw its role to return to the pre-1965 regulations. The Chief Justice John Roberts, a longtime opponent of the Voting Rights Act, wrote the decision that declared the law was outdated since Black people can vote in all states.

Roberts’ majority ruling gutted the key Section 5 that allowed the Justice Department to stop new state laws before they went into effect. Not anymore.

The 2021 court voted 6-3 in its Arizona case to overturn Section 2 that allowed the Justice Department and lower courts to overturn new laws that discriminate in practice. The decision effectively nullifies the 1965 law.

“The size of any disparities in a rule’s impact on members of different racial or ethnic groups is a crucial factor to consider. Even neutral regulations may well result in disparities in rates of voting and noncompliance with voting rules. The mere fact that there is some disparity in impact does not necessarily mean that a system is not equally open or that it does not give everyone an equal opportunity to vote. And small disparities should not be artificially magnified.” (https://www.supremecourt.gov/opinions/20pdf/19-1257_g204.pdf)

During the period of American apartheid, called Jim Crow, the laws rarely if ever mentioned specific discrimination directed at Blacks. Yet few Black people could register and vote throughout the South.

The movement against voting rights is serious. Liberals and the Biden government have spoken loudly but have no effective strategy to stop the right wing.

Kamala Harris told Black women activists that they must get out the vote even though the restrictions can stop the results. She said the government will spend $25 million. At least 20 times that is needed.

The historic legislation of 1965, which President Johnson signed into law, outlawed literacy tests and provided for the appointment of federal examiners (with the power to register qualified citizens to vote) in those jurisdictions that were “covered” according to a formula provided in the statute.

To give one example of the impact of the 1965 law for Black people, in the state of Mississippi only 6.7% of African Americans were registered in 1964. After the law was passed, registration jumped to 58%.

Segregationists and defenders of the Confederate legacy never supported the 1965 Voting Rights Act. Attempted state rollbacks began immediately. Waiting for the Senate to pass a new federal law would be to allow the right wing to win at the state level.

A new stage of the counter revolution is ongoing. Will it be Jim Crow 2.0?

President Biden continues to defend a Jim Crow relic, the filibuster. It is an arcane Senate rule that requires a super majority, 60 out of 100 votes, to bring legislation to a vote.

He continues to call on his “Republican friends in the Senate” to support voting rights. Biden and Harris see the effort as getting people to vote around and through obstacles, even though Republicans can use the laws to overturn the voters’ will.

The White House continues to see the issue as secondary to other concerns such as foreign policy and domestic bipartisan support for infrastructure.

African Americans do not see it that way. But until all U.S. citizens and residents see the right to vote as essential to bring about change, little legislation for change is possible.

The end of 19th century slavery and 20th century Jim Crow legal segregation were not fueled by legislation or courts. The first took a revolutionary civil war and the second required mass civil disobedience led by the Black community.

What Texas Democrats have done by stopping for now a quorum and coming to the Capital is an important form of resistance. It is a call to action.

More must be done now. The people of all ethnic groups need to hit the streets, as the Black Lives Matter movement did in 2020.