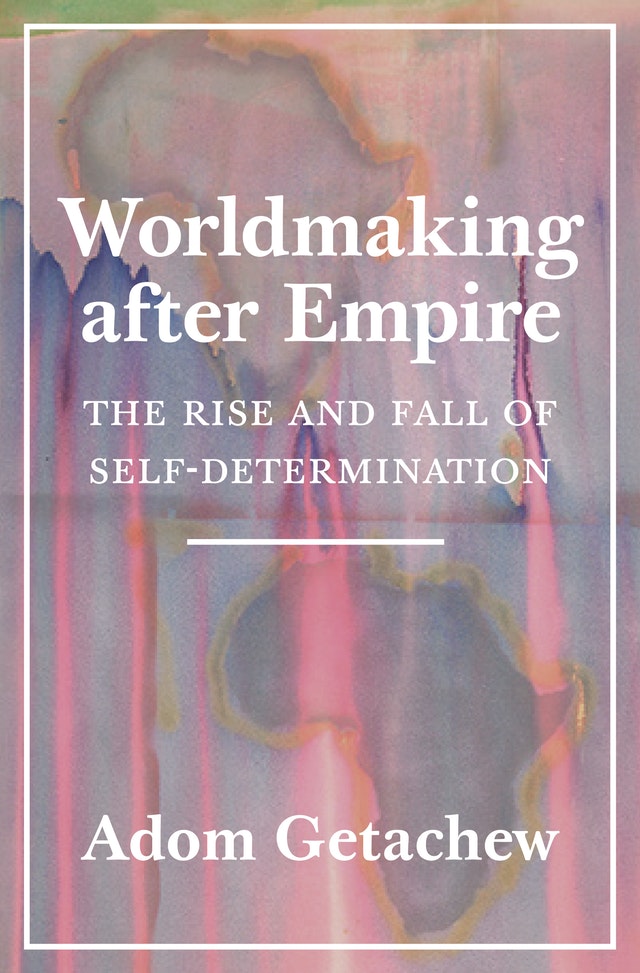 “FROM OUR VANTAGE point, the transition from empire to nation in the twentieth century appears inevitable. And while the universalization of the nation-state marked an important triumph over European imperialism, it has also come to represent a political form incapable of realizing the ideals of a democratic, egalitarian, and anti-imperial future.” (1)

With this opening observation, Adom Getachew begins an admirable and convincing historical analysis in her recent book, Worldmaking after Empire. Understanding the current political moment as a phase in the centuries-long pillage of the global south by the global north, Getachew examines the practice and promise of several anticolonial efforts.

Specifically, she demonstrates that the goals of anticolonial activists in Africa and the Caribbean extended beyond establishing nation-states. Anticolonial nationalists, as Getachew terms them, considered national self-determination to be only a first step toward liberation and a new international order.

For Getachew, their stance was appropriate. Her book traces the emergence of anticolonial nationalism and highlights the thoughts and activities of Black Anglophone figures Nnamdi Azikiwe, W.E.B. Du Bois, Michael Manley, Kwame Nkrumah, Julius Nyerere, George Padmore and Eric Williams, though the author acknowledges many other significant postwar, anticolonial activists such as the Francophones Aimé Césaire and Paulette Nardal.

Over the course of three chapters, Getachew, a faculty member in the Department of Political Science at the University of Chicago, theorizes colonization, explaining that it is more than simply the presence of alien rule. It is the maintenance of a global hierarchy based on racial and economic injustice.

W.E.B. Du Bois famously declared in 1900 that “the color line,” the exploitation by Europe and her descendants of the darker races, was “the problem of the twentieth century.” Du Bois proved to be prescient when projects of self-rule collapsed under the weight of racialized imperial machinations.

Decolonization was not progress as conveyed in normative narratives, that is, as the natural and ameliorative extension of Westernization. Anticolonial nationalists knew that the nation-state was a frail achievement.

It was a necessary staging ground for further struggle, but the structured and unavoidable dependence on an international order that had no plans to integrate them equally left all so-called postcolonial nation- states subject to neocolonial destabilization. The material resources and labor would remain available for plunder.

Serious nationalists had no choice but to adopt a far-ranging outlook, what Padmore would label the Black International, if they were to secure peace and prosperity in their homelands. The generative debate was not about nationalism vs. internationalism: The national project faced inevitable doom, as Nkrumah feared and would discover in Ghana.

The pressing need for anticolonial nationalists was to resist domination and challenge the global racial hierarchy, one that had become more rigid with the rise of whiteness as a consciously realized identity and a bond between Europeans and those of European descent who were settlers abroad.

The colonial-whiteness nexus was discernible in the League of Nations, of which segregationist President Woodrow Wilson was a primary architect along with the likes of Jan Smuts of South Africa, although Wilson could not persuade the United States to join. Not that the League did anybody much good. Firmly committed to the global racial hierarchy, the members talked self-determination but practiced empire.

Getachew regards the League’s early functioning as the “Wilsonian moment,” one which unfolded coincidently with the Communist International and the Du Bois-organized Second Pan-African Congress.

Eventually, as it continued to appropriate the idea of self-determination to preserve white supremacy worldwide, the League did nothing for the likes of Ireland, Egypt or India, and refused to intervene when Italy, one of its members, invaded Ethiopia, a second member. Perhaps the best aspect of the League before it became a casualty of World War II is that its failings clarified or deepened the radicalization of people like Du Bois, James and Padmore.

Anticolonial nationalists achieved more success with the League’s successor, the United Nations. At first, the organization seemed eerily like the League. It espoused the rhetoric of human rights and equality but, Winston Churchill impressed on all around him that when he said “rights and equality” he was not referring to British colonies.

Nonetheless, unlike the case with the League of Nations, a politically decolonized Africa became a fact, and newly independent African nations were able to leverage the United Nations, in particular the General Assembly, as a medium for decolonization.

The signal achievement in that regard was the passage in December 1960 of Resolution 1514, Declaration on the Granting of Independence to Colonial Countries and Peoples. This, however, proved to be no panacea.

Self-determination would run aground on the shores of neocolonialism. Patrice Lumumba was executed in 1961; Nkrumah was ousted by a U.S.-backed coup in 1966; the Nigerian-Biafran war raged from 1967 to 1970. Nonetheless, the UN remained an important international forum within which postcolonial nation-states had a voice as they tried to resist external control and further their attempts at worldmaking.

In a fourth chapter, Getachew presents two case studies in regional federalism, the proposed Union of African States and the West Indian Federation.

Anticolonial nationalists, faced with the facts of formal independence and de facto dependence, found themselves in what the author, following legal scholar Aziz Rana, calls the “postcolonial predicament.” Realizing the vulnerability of nation-states, they turned to federalism in attempts to strengthen their nations economically and militarily.

Ironically, the leaders of these initiatives, Nkrumah and Williams, looked to the United States as a model. Both read The Federalist Papers and were convinced that, in terms of power, federalism could do for African and Caribbean nations what it did for the 13 colonies. In their minds, the lack of federalism accounted for the weakness of countries in Latin America and Eastern Europe.

Of course, they ignored for their purposes the reality of American slavery and American designs on conquest. In other words, as Getachew phrases it, “the United States was the only former colony to have triumphed over the postcolonial predicament not because it had federated but because it was an imperial federation.” (119)

This is not to say that federation was unworkable but it could not succeed in a liberating fashion by trying to follow the American example too closely.

In the end, Nkrumah failed to reckon sufficiently with intrastate issues. The geographical borders of colonialism were not the best alignment with respect to ethnic and religious groups, and subnational groups also asserted claims of self-determination.

Azikiwe, the governor-general and later first president of Nigeria, objected along those lines, and additional states were wary of the strong hand of a centralized political union. In 1963, with the formation of the Organization of African States, Africa opted for a treaty organization instead of Nkrumah’s dream.

Eric Williams faced a similar outcome with the West Indian Federation, which lasted from 1958 until 1962. Critics such as Jamaica’s Norman Manley favored a looser alliance than a federation, although he agreed that the existing organization was valuable and believed the Jamaican people would remain supportive. They did not, voting in 1961 in favor of ending the experiment.

From Anticolonial Wave to Neoliberalism

In chapter 5, Getachew explores second-wave anticolonial nationalism, particularly the work of Julius Nyerere in Tanzania and Michael Manley in Jamaica. After the coup in Ghana, those two became perhaps the most well-known symbols of postcolonial development.

Friends and interlocutors since their student days in the United Kingdom, each implemented a variety of socialism in his country. As part of their Marxist critique, they embraced the argument that postcolonial nations were analogous to European workers of the 19th century, a construct tied to the moral claim that postcolonial nations had produced the wealth of developed nations and were owed redistributive justice in return.

Moreover, Nyerere and Manley knew that economic failure for postcolonial nation-states was hardwired into the international economic order. Their demise was hastened by the oil shock of 1973, falling prices for native goods, and dependence on dominant nations and institutions for aid, including bad deals with the International Monetary Fund, leading to debt crises. As proponents of federation understood, sovereignty alone cannot save a postcolonial nation-state.

Recognizing the concerns of anticolonial nationalists, the UN General Assembly in 1974 adopted the Declaration for the Establishment of a New International Economic Order. But its proposals that could have helped secure economic health for postcolonial nation-states such as Tanzania and Jamaica, like ensuring state control of natural resources and fair taxation of corporations, lacked force.

The NIEO was more of an ideological map than a concrete operation. It was undermined by powerful opponents who possessed no sympathy for the notion of nation-states as oppressed “workers.” In Getachew’s estimation, neoliberal economics ushered in a counterrevolution that displaced the NIEO and stifled hopes for global economic justice. If neoliberals cared anything about justice, they directed that concern toward individuals, not nations.

Getachew ruminates in the epilogue about the collapse of a vibrant anticolonial nationalism with its internationalist gestures. She blames intellectuals and politicians, Daniel Patrick Moynihan prominent among them, for rejecting egalitarian claims on world resources. Moynihan, who was the United States Ambassador to the United Nations under President Gerald Ford, argued that the Third World was at fault for the economic problems of the Third World.

Moynihan, subsequently elected to the United States Senate, also never hesitated to point, with some justification, to shortcomings of postcolonial nation-states relative to undemocratic practices. This was from the same playbook used by those who opposed federations.

At any rate, neoliberalism became ascendant. Even Michael Manley climbed on board by the 1990s.

Ultimately, Getachew sees the need for a reimagining of global relations. She sees promise in Black Lives Matter, reparations movements, and the calls for social and economic decolonization in South Africa.

That is to say, she believes the task of worldmaking remains before us. Her scholarly contribution is immense. Readers predictably will have to fight through some abstraction but will be amply rewarded for doing so. Unfortunately this is a timely book, but fortunately it is right on time.