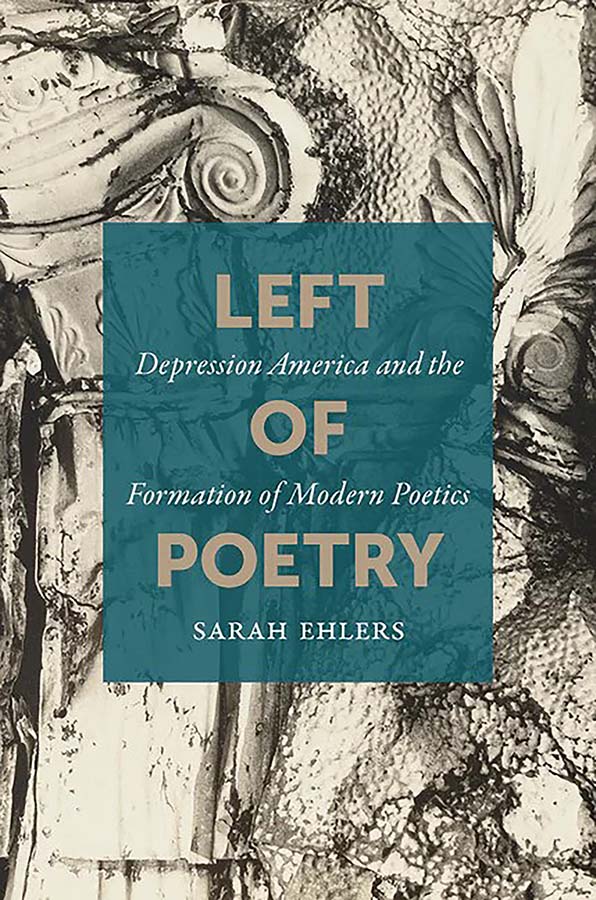 SARAH EHLERS, AN Associate Professor of English at the University of Houston, has published a highly original book reclaiming the lyrical and political work of several renowned as well as forgotten poets of the 1930s. Attracted to the Communist movement, they collectively cultivated an anti-capitalist poetics that the scholarly community has since neglected.

In a lucid three-part structure, Ehlers situates their work against the backdrop of decades of anti-communist propaganda, which accelerated especially after the 1939 Nazi-Soviet Pact, and the rise of New Criticism (a formalist movement in literary theory) in the American academy.

Using the rubrics of “Documentary,” “Lyric” and “Rhythm,” Ehlers shows how a fresh exploration of Communist-affiliated poet-activists like Langston Hughes, Muriel Rukeyser, Martha Millet, Edwin Rolfe, Genevieve Taggard and Jacques Roumain reveal biases in the cultural mechanism not only of canon formation but also of how we tend to read such authors. She depicts the social and poetic consequences of the institutionalization of high modernism (that is, exclusionary experimental literature before World War II) in New Critical discourses that, throughout the war and after, glorified stylists like Ezra Pound, whose pro-Fascist politics became conveniently irrelevant to an apolitical aesthetics that prioritizes formal innovation over all else.

In the hands of these Communist-affiliated poets, the lyric, traditionally understood to be the outward expression of an individual’s inner thoughts — which the reader, New Criticism teaches us, merely overhears — becomes more communal, more international, less inscrutable, and enjoys a farther public reach. Guided by a historical methodology devoted to archival retrieval, Ehlers salvages a Communist contribution to the lyrical form that recovers conceptions of community, meter, and accessibility. This achievement reveals that what scholars today recognize as conventional writing and reading practices are actually informed by a deeply anti-communist trajectory.

Ehlers’ source material includes travel logs, personal scrapbooks, photographs, medical documentation, unfinished manuscripts, children’s books, union songs as well as poetry and essays from small revolutionary magazines like Dynamo and New Masses. From these archival materials she garners an argument about poetry’s role in representing history that crosses media and generic boundaries. As much as the work of the high modernists, imagists or objectivists, communist poetry also develops an aesthetic that draws from other media, particularly, photography, folk music and radio.

Poetry’s proximity to the American public is, in part, the subject of Ehlers’ analysis. Documentary poetics opens up the book’s tensions of representation — a question of “how documentary and poetic forms mediate conceptions of history and political agency.” (68) Ehlers sees Hughes’ works like the poems “Wait” and “Open Letter to the South,” and the play Scottsboro Limited, as retaining important lessons from photography’s power “to concretize the abstractions of economic relations,” untainted by a tourist’s gaze. (49) Similarly, by refusing to capture her subject sentimentally, Rukeyser’s exploration of the 1930 tunnel disaster in Gauley, West Virginia in Book of the Dead brings her reader closer to the grounds of historic neglect.

Each of these poets stands at the intersection of “the visual and the verbal” to reveal “how the speaker of a poem exists in a gap between lived history and representation, and it enacts a mode of expression that is not authentic or private but mediated by technology and history.” (30)

For Ehlers, poetry occasions a new access to social life that current conceptions of the lyric disregard; she illustrates that poetry therefore has the capacity to fill historic gaps in understanding capitalist crisis.

At stake for the book is a fierce confrontation of the political implications intrinsic to the individualistic, detached, and atemporal lyrical speaker at the heart of 20th century American poetry. In poetry’s inheritance of Romanticism, a topic explored in chapter three, Ehlers sees a resistance to community where Romanticism bestows us with a lyrical “I” whose internal expressions are liberated from historical contingencies.

The New Critical classroom, with its formalist commitments to irony, subjectivity and autonomy, has taught us to read poetry as if we are overhearing the speaker’s private thoughts, rather than an urgent transmission from one global citizen to another. Communist writers, like Taggard and Rolfe, rebuke this individualistic inheritance as one distorted and appropriated by capitalist alienation.

For instance, in Taggard’s poem “Night Letter to Walt Whitman,” the lineation shows a decentering of the individual where the lyrical speaker is pushed to the end of each line, becoming simultaneously “an afterthought and a hinge from one thought to another”:

They are brother and sister and sister
City and land           They are sick
I think
They are going to die   I swear I want
another pair
A swarthy sister with strawberry
mouth      I say
Another smelling of new-mown hay and
the fur of cattle. (121)

Ehlers’ discussion of pro-Communist poetics dissolves lyrical conceptions of subjectivity in order to position the speaker as a nexus through which readers connect with each other.

For Ehlers, the historical revelation of leftist poetry animates the lyric so that it transcends the personal or private. The speaker enunciates not merely an expression of individual experience but the reception or “lyrical effect” of historical contingency. Rejecting the isolation of the Romantic lyric, Taggard and Rolfe also recover poetic community by reinvigorating traditional folk genres, ballads, songs, and other forms with “rhythm” that serves the public’s need to connect with each other.

Reclaiming “rhythm” from theorists who see only capitalist alienation in the synchronous and repetitious labor of the masses, Ehlers foregrounds the aptitude of simplistic song-like poetry to proliferate among a fast-growing collective. Like the reproducibility of film or the radio broadcast’s immediate accessibility, the poetics forwarded by activists like Millet function primarily as a vehicle of circulation; awareness, union, and collectivity come to define a poetics that runs counter to the lineage of modernism.

Repudiating the condescension of New Criticism, Ehlers exhibits the poetry during the 1930s as a form of social praxis that does indeed have its own formal and teleological depth. Millet’s incorporation of song and rhythm becomes a means of defying the emerging modernism that hales conservative politics under the guise of being apolitical.

When the Haitian revolutionary Jacques Roumain was asked to give a lecture on culture and literature in 1939 in New York, he instead chose to discuss the war, calling it “a more urgent task than to stir the dust of archives.” (163) While Roumain was right to attune American poetics to the immediate and tangible present, Ehlers demonstrates how stirring the dust of archives is a crucial imperative for understanding what the American lyric looks like today, “when matters of financial crisis, working-class representation, the perils of individualism, and the possibilities for global connectedness outside the flows of capital are at the forefront of thinking in the humanities.” (17)

From the standpoint of both global citizenship and poetic scholarship, Ehlers’ book articulates how what we learn in school about the arts is deeply contoured by the ebbs and flows of political history.

Ehlers recovers an archive of material that hasn’t been taught partially because of its unavailability (Millet’s manuscript on Pound, for example, wasn’t available to researchers until recently), but mostly because of its erasure. She exposes not only the faults in the ways we have been taught history, but also how we’ve been taught to read and interpret works of literature.

The impact I hope Ehlers has for each reader is to reckon with what it might mean for a poetic speaker to speak to you directly, rather than be left isolated in the fog of “poetic universality.” For any poetic universality to exist, after all, the speaker needs to unite with the reader, and with all readers to come.