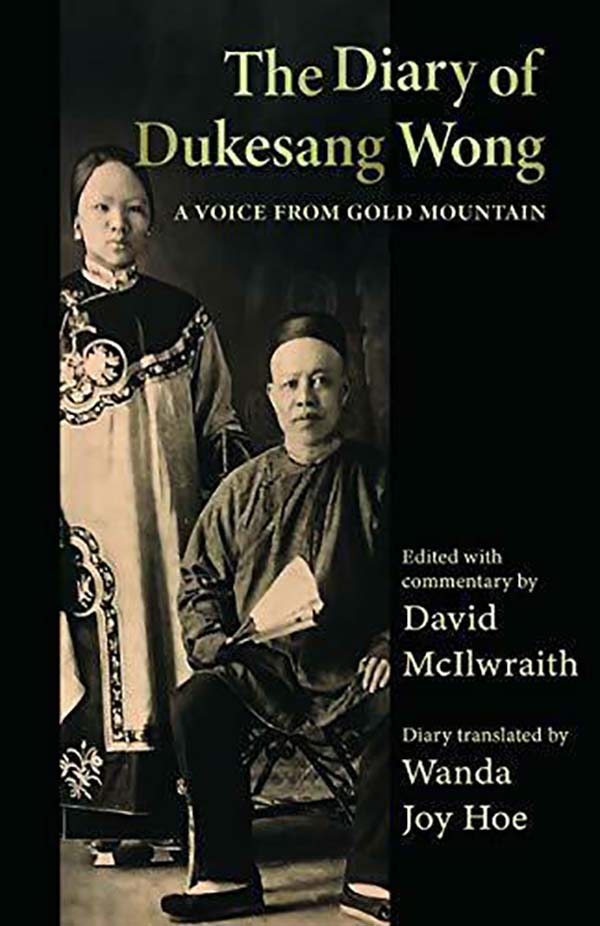 IN 1880, FIVE years before the completion of the Canadian Pacific Railway and the federal government’s imposition of a head tax on Chinese immigrants, Dukesang Wong (1845-1931) migrated from China to “Gold Mountain,” the term Chinese migrants used to refer to the west coast of the United States and Canada. He landed in Portland and eventually found work building the railway in British Columbia. Later he became a tailor, brought his wife to Canada, and settled his family here.

The Diary of Dukesang Wong is a selective translation of seven notebooks, originally belonging to Wong, and are the only known primary account of a 19th century Chinese railway worker.

As editor David McIlwraith points out in his introductory commentary, the absence of primary accounts is a testament to the virulent forces of anti-Chinese racism, which ejected Chinese people from white-dominated spaces through physical violence that also functioned as historical erasure.

Unfortunately, Wong’s original diaries were destroyed in a fire, so the book itself consists of excerpts translated by his granddaughter, Wanda Joy Hoe, while she was a university student in the 1960s. What remains covers two periods: Wong’s life as a disenfranchised member of the imperial administrator class in China, from 1867-1880, and his subsequent migration, 1880-1918.

The diary entries themselves barely take up one-third of the slim book. Interspersed is commentary by McIlwraith, who is not a historian but rather a writer with a particular interest in the history of early Chinese migrants in Canada.

The primary text is the real star of the book, with McIlwraith’s commentary providing additional context and interpretation. This is helpful but also politically limited by its inattentiveness to the gendered dynamics of Wong’s identifications with and against Canada and Qing dynasty China.

The raw material of Wong’s private thoughts, dreams, desires and frustrations, as well as the fragmented nature of the diary, place a heavy hermeneutic burden on the reader. But if read with attention to Wong’s shifting social positions throughout his journey, the text reveals rich insights to the gendered, racialized and class production of subjectivity, and in particular pushes back against ahistorical renderings that imagine anti-Chinese racism as autonomous from the economic imperatives of colonialism, capitalism, and imperialism.

Wong’s diary reads like a typical diary: his scope is that which intimately impacts him and what he reports are his own thoughts, observations and feelings. As a young man in China he struggles with the downfall of his family, which is triggered by the assassination of his father, an imperial magistrate. This is followed by the suicide of his mother and culminates in his abandonment of ambitions to complete his education and join the ranks of the Qing bureaucracy.

Mapping Wong’s use of “I” and “we” pronouns points to how class relations mediated his sense of identification and group belonging. Wong’s entries while in China gesture at collective family interests, but the deterioration of his family after the death of his father has an atomizing effect: we read only about his “I,” moving through the world and struggling to find a new life path.

Outside of his “I” lie the peasants, whom he repeatedly writes about as a kind of unruly, dangerous and hot-headed externality — particularly during moments of historical rupture, like the collapse of the Qing Dynasty. Only with Wong’s arrival to the United States and his first diary entry written there does he express himself with a passionate “we”: a plural product of the compressing, racist violence meted out to all Chinese people, irrespective of their class backgrounds.

Wong’s “we” reaches its crescendo during his work on the railroad where he writes poignantly, “I am truly alone amid the dying. The leaders of the white people demand money — our poor savings — taken from we who have so little, given to those who are not so taxed.” (60)

But in response to political upheavals in China, Wong’s “we” splits to capture the interests of his class of origin. Writing about the Boxer Rebellion, an anti-imperialist insurrection led by Chinese peasants against Western foreigners that began in 1899, Wong seems unable to recognize the international character of the white supremacy that, in other contexts, he bemoans.

Instead, he writes fondly of the white people he encountered in China as educated men adjacent to the intelligentsia, who “mingle with us and share their books with us,” contrasting them from the whites in Canada who “separate us as if we were dishonourable.” Alongside his delineation of good and bad whites he separates himself from the “common people” he blames for throwing away honor and acting “against our long civilization and all our great teachings.” (99)

Wong wrote these words in 1901, after the Eight Nation Alliance of Western imperial powers invaded China to put down the rebellion, executing rebels, looting Beijing and further entrenching imperial domination over China. Despite being deeply oppressed in Canada by whites, Wong gazed backward longing to find an unchanged China where white and Qing dynasty elites had their place above the peasant masses, a desire that aligned with the interests of western imperial powers.

The tension between Wong’s “we,” which unites Chinese migrant workers against white workers and bosses, and his imperial “I,” lifting him above the peasant masses who are themselves trapped in feudal relations with the imperial administrator class, traces alignments with class power that fracture Chinese communities in white supremacist nations.

Wong saw his disenfranchisement in China as inappropriate because of his class position. In Canada, upon experiencing the great equalization of white supremacy alongside other Chinese migrants who overwhelmingly came from the peasant class, he developed a sense of class solidarity while continuing to covet the Qing Dynasty order in China, an expression of his rightful class position above peasants.

Today, it is no longer Qing Dynasty China providing the petty-bourgeois and bourgeois Chinese diaspora with a sense of exception, but their identification with a different imperial power, Canada: Wong did not make the leap from identifying with China’s imperial order to identifying with Canadian settler-colonial and imperial power. However, his nostalgia foreshadows the subsequent emergence of a privileged diaspora willing to align with Canada over the interests of poor workers globally.

Wong as Patriarch: Domestic “We” Wedded to Sovereign “I”

In the late 1880s, Wong’s wife Lin arrived to join him in Canada, where he was no longer a railroad worker but the co-owner of a successful tailoring business, later to become the elected president of a Benevolent Association in New Westminster in 1903.

Upon Lin’s arrival, Wong begins to turn away from the solidarity of his coolie-wide “we” to a domestically focused “we” and “I.” It’s no longer his fellow, toiling peers with whom he primarily identifies, but the patriarchal purview of his domestic life, itself dependent on his business.

Not surprisingly, in the twists and turns of Wong’s life and fortunes, the establishment of a business and a nuclear family restored to his life a sense of “natural” order scaffolded by gender and class.

McIlwraith notes Wong’s domestic turn but fails to explore Wong’s family as a site of politics, instead focusing on Wong’s reactions to ongoing white racism and turmoil in China. But Wong’s deeply patriarchal aspirations to own a home and a wife are no less historical or political than the racism he suffered at the hands of white settlers. Indeed, throughout his diary the desire to become a patriarch mediates his relationship to women, peasants, class and Indigenous land.

Chinese men outnumbered Chinese women by a ratio of 28 to 1 in the early 20th century. While some merchants could bring their daughters and wives with them, working-class Chinese men could not, highlighting the classed character of access to Chinese women and the gendered character of Canada’s racist immigration policy. While McIlwraith notes the rarity of Wong’s ability to reunite with his wife to be, his commentary does not explore its classed and gendered implications.

For Wong, the establishment of his own family allows him to retrieve a sense of imperial entitlement, hitherto buried beneath family ruin in China and white supremacist violence in Canada. Following his first son’s birth, he writes that “the name of Wong will continue” and that “the order is oh, so good,” naturalizing patriarchal power as an expression of cyclical time. (86)

While Wong experienced ongoing racist exclusion from Canada despite settling down with a business and family, the way class and gender ordered his sense of natural hierarchies foreshadow the emergence of a Chinese dispora class whose assimilation into Canada is contingent on occupying Indigenous land, participating in compulsory heterosexuality, and owning businesses.

How should we read Wong’s diary in the 21st century, in a moment marked by broad agreement that racism is “bad” and should be denounced — especially if it takes the form of a random hate crime that bourgeois politicians can denounce as a problem of immoral individuals, rather than a reflection of the West’s imperialist aggressions?

In a context where it has become a liberal cliché to point to the exclusion of Chinese migrants and plight of Chinese railroad workers in order to denounce contemporary yellow peril, Wong’s diary offers a critical intervention in hegemonic understandings of racism, which detach white supremacy from its base in colonialism, capitalism and imperialism, fixating on exceptional instances of hate rather than the mundane exercise of race power through class and gendered exploitation.

Today’s reformists are eager to recuperate figures like Dukesang Wong as founding fathers of multicultural Canada, as if white supremacy can be eradicated by selectively assimilating racial aliens who pose no threat to the nation: historical ghosts like the Chinese railroad worker and bourgeois and petty-bourgeois Chinese people willing to embrace Western empire. Indeed, portions of McIlwraith’s commentary as well as the book’s introduction perform the ideological work of discovering in Wong proof that Chinese migrants are rightfully part of Canada.

But Wong’s diary reveals, against the ideological upholstery of liberal anti-racism, that the bounds of settler-colonial nationhood are historically contingent, which means that for some to belong, others must be violently left out. The production of Canadian nationhood, which today relies on the “post-racist” discourse of multiculturalism, is no less reliant on exploitation, colonial occupation, imperial domination, or the gendered division of labor than it was for Wong. Yet where Wong was barred from integrating into Canada, his gendered and classed descendants are not.

For Wong, imperial patriarchy formed a continuity between feudal and imperial China and bourgeois and settler-colonial Canada that, while ordering his aspirations and relations to classed and gendered others, never materialized into a bridge that he could fully walk over. Yet his diary foreshadows a multi­culturalist Canada where the possibilities of assimilation have been greatly expanded while always set within the limitations of class, gender, and colonial belonging.

His voice, with its shifting and inconsistent pluralities, insists that for national belonging to become more “inclusive,” there must be aliens willing to step across the narrow bridge that leads to the rotten heart of imperial civil society and in so doing, leave behind the gendered, racialized, classed and colonized others whose interests exceed imperial, colonial and bourgeois nationhood.