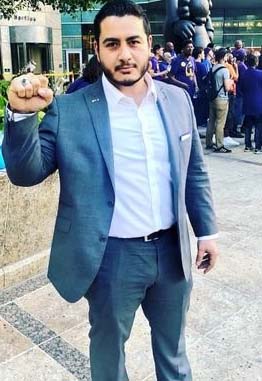 DOCTOR AND POLITICAL activist Abdul El Sayed has had a busy last few years: re-creating the Detroit health department, including expanding services such as eyeglasses for children so they can better engage in school and vaccinating residents during a hepatitis A outbreak in their neighborhood; running for governor in the 2018 primary (including visits to every single county in Michigan); and now, in addition to being a sometime commentator on CNN and producer of a daily political newsletter, Incision, involved writing two books.

One book shows us El Sayed’s background and political philosophy. The other is a how-to guide for those of us involved in the struggle for Medicare for All.

Healing Politics is divided into three sections. The first tells the story of Abdul’s childhood and young adulthood, the backdrop for his philosophy and political activity. His parents emigrated from Egypt, where his father was an agitator against the Hosni Mubarak dictatorship.

Growing up in a comfortable suburban environment and attending good public schools, Abdul experienced racism playing basketball at night or walking in his own subdivision. He was hassled by the police and told to go back to Mexico.

He enrolled at the University of Michigan. Not surprisingly, he experienced racism there too. He won a Rhodes scholarship, which he deferred to go to Columbia Medical School. He witnessed the humiliation of poor patients in the emergency room and was inspired to switch to public health to help change systems, not just to help individuals.

His personal account discloses his doubts and motivations, how much his parents’ divorce hurt him, how his wife, a psychiatrist, helped him come to terms with that pain, and the overwhelming joy he felt at the birth of his daughter.

The book’s second section details Abdul’s belief that what he calls “politics of insecurity” fuels much of the racism in society, and people’s unwillingness to share resources and participate in the public commons.

(I recommend Heather McGee’s excellent new book The Sum of Us, detailing how this attitude is much more prevalent among white than among Black working-class people.)

Following 40 years of disinvestment in public schools and universities, as well as the decline of labor unions and the security they provided, many people are poorer, and more fearful of what little they have being taken away. Why should I share when I have so little? is the attitude.

To illustrate the meaning of insecurity, Abdul shares two stories: When Director of the Detroit Health Department, he spent time with a Black janitor who had to take several buses to get to work because he couldn’t afford a car. Likewise, a conversation with Lyft driver Chris, a white ex-union member from Macomb County who had attended the same public school as Abdul’s wife, now underemployed and believing he’ll never again have a fulltime job with benefits, shows the basis of his insecurity.

Section Three details Abdul’s “healing politics” and his philosophy, which includes “the politics of empathy“ and embracing our collective humanity. This includes reforming systems that have driven insecurity, inequity and pain.

Regarding minorities in this country, he identifies tokenism as a pervasive tool of today’s ruling forces, and a device by which movements for equity and representation have been thwarted throughout history, using the example of British colonial rule in India to illustrate this. (245)
He also gives the example of people in the Muslim community connected with state government, who were stridently opposed to him when he ran for governor in the Democratic primary. They had proximity to power, but no independent power of their own.

Abdul supports the Squad (outspoken progressive Congressional representatives) for what they believe in, not just their skin color or gender. What he calls “politics of empathy” means, as he puts it, “we can’t tinker around the edges to deal with insecurity.” We have to really change, part of which comes through effective governmental support for working people: a living wage, good public schools, easier unionization for example.

While he supported Bernie Sanders’ program and primary campaign, Abdul also discusses the political pitfalls of using the word “socialist,” with its long stigmatization, particularly for older voters. (243)

He strongly believes that the government exists to solve problems, but “we as a society acting through our government have failed to provide the basic goods and services that are so critical to living a dignified life to many in our society.” (253)

The historical role of racism in the political behavior of the white working class and middle class is presented, but in my view underemphasized. While I agree that it is crucial for the government to provide material support to the working class, decrease inequality, provide meaningful work, good schools and communities – all positive aspects of what we call social democracy — I’m skeptical that white nationalists will be swayed by better government services. I hope I am mistaken.

This is a highly readable book by a brilliant and accomplished politician and epidemiologist, passionate and thoughtful in support of social democratic reforms. I hope to see his trajectory continue leftward.

The Health Care We Need

Medicare for All: A Citizen’s Guide is co-authored with Micah Johnson. Johnson, a fellow Rhodes scholar and a resident at Massachusetts General Hospital. The book is forwarded by Bernie Sanders and Pramila Jayapal, giving context for the current battles.

The authors begin with human disaster stories within our current healthcare system. They illustrate the fundamental inability in an emergency to make an “informed choice of providers,” the Kafkaesque insurance policies and the consequences for people who need to (try to) use them.

The history of the attempts at universal healthcare in this country, which they review, reveals the underpinnings of the current opposition to healthcare reform. For example, the fundamental opposition to Universal Healthcare proposed by Harry Truman in 1948 was racism: White Southerners did not want to open their white hospitals to Black patients.

Opposition to the expansion of Medicare after Lyndon Johnson signed the original bill into law in 1965 was due to both organized medicine led by the American Medical Association and for-profit insurance companies.

The second part of this book discusses policies including our anti-prevention construct that keeps people in this country so ill (along with poverty, racism, environmental racism, corporate refined food, etc.). El Sayed and Johnson also detail the problems with high-deductible plans that are often the only thing that’s affordable for working-class families in the “unaffordable care act.”

As I write, Joe Biden is allowing his corporate donors to control the agenda and block the possibility of moving away from for-profit healthcare. That’s tragic.

Part three is about the political difficulties of passing Medicare for All. The for-profit healthcare systems have been honing their opposition to Medicare for All since Hillary and Bill Clinton’s attempted “reform” in the early 1990s. This same group. in collaboration with big Pharma, engineered Medicare Part D, in part to prevent the government from negotiating drug prices.

New to the mix are hedge fund managers who now own many Healthcare systems wringing whatever profits they can out of them, leaving no room for educational programs, nutrition services, etc.

“The future of Medicare for All may hinge on three big questions:

1. Whether the government should shoulder one of the largest and fastest growing expenditures burdening American families.

2. How best to provide the necessary good to all people equitably and

3. Whether we believe in collective action in an increasingly diverse America.” (296)

The progression is by no means guaranteed and will require a tremendous amount of work to help people understand what Medicare for All means and to counter the corporate and neoliberal opposition.

As a retired physician, and longtime single-payer activist (the old term for Medicare for All), I understand the critical need for high-quality government-funded healthcare for everyone. This clear, readable book lays out that challenge. Multiple YouTube videos also cover portions of this book. Both authors are excellent speakers; I recommend the videos.